UP By-Polls: When BJP Took Its Eye Off The Ball 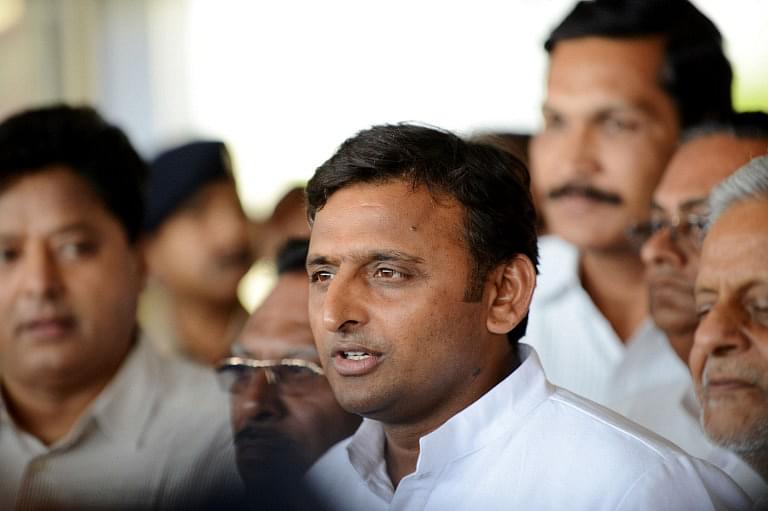 A wiser Ahkilesh, and the lack of star cast has brought BJP back to terra firma in UP

Coming on the heels of its poor performance in by-polls in Uttarakhand, Bihar, Madhya Pradesh and Karnataka, BJP’s recent drubbing in Rajasthan and Uttar Pradesh (UP) in September by-elections has put the party and its leadership in an awkward and defensive position. In UP, BJP losing eight out of eleven assembly seats to Samajwadi Party (SP) – which also retained its traditional stronghold Mainpuri parliamentary constituency– not only gave much needed respite to chief minister Akhilesh Yadav, whose reputation had nosedived after Lok Sabha (LS) elections in May earlier, but also raised some crucial questions.

All eleven assembly seats in by-elections were BJP held seats; obviously, pressure to retain them was high. Many projected party’s dismal performance as a referendum on first-hundred-days of Narendra Modi as PM. Some linked it to failure of Amit Shah, BJP’s National President while others tried to explain the verdict as rejection of the ‘love jehad’ bogey raised by party’s firebrand campaigner and Gorakhpur MP Yogi Adityanath.

Overall, the by-election results must have dampened the spirits of Modi coming as it did on the eve of his birthday on 17 September when he was receiving Chinese President Xi Jinping in his home town Ahmedabad, though he had already decided not to celebrate it in wake of devastating floods in Jammu and Kashmir.

The competitive setting in by-elections was different from LS elections. Mayawati’s BSP decided not to contest, and Congress was in bad shape. The electoral contest virtually turned out to be bipolar – between BJP and SP. While LS elections were Modi-centric and development oriented, the by-elections suffered from three abstentions. One, Modi was nowhere in scene; two, development was not an issue; and, three, by-elections were local in nature having no impact on Modi or his government. But, surely, it was a warning signal to Amit Shah that UP cannot be taken for granted, and also to the hardliners in party indicating peoples’ disapproval of raking communally sensitive issues. In a nutshell, by-election results amply demonstrated that BJP still suffers from identity, ideology and leadership crises in UP.

Many observers and scholars thought that most of the constituencies were located in western UP and the defeat of BJP was interpreted as blow to alleged polarization efforts by the party. But, the eleven seats were spread all over UP – two seats in west UP (Noida and Saharanpur),  two in Ruhelkhand (Bijnore and Thakurdwara), two in Avadh (Lucknow east and Nighasan), two in Bundelkhand (Hamirpur and Charkhari), two in east UP (Rohania and Balha), and one in north east UP (Sirathu). And, obviously, BJP won both the seats in west UP.

But, by-election results raised many issues. Was it revival of incumbent SP government of Akhilesh Yadav in spite of its poor record on law-and-order, communal riots and development? How did the Dalits vote in absence of BSP? Did the erosion of her core vote worry? Are OBCs largely back to SP after having voted Modi and BJP in LS elections? What could be BJP strategy to replicate the saffron sweep in 2017 assembly elections?

The SP victory in the by-elections has to be put in perspective. As compared to 2009 parliamentary elections, its vote share was almost unchanged in 2014–just 1.1% down. But, it lost 18 LS seats in 2014 by just shedding 1.1% votes. It was due to the massive difference between vote shares of its own and the BJP’s. Also, many of its OBC voters who earlier voted Modi, returned to SP as they had nothing to do with BJP.

Also, Akhilesh had become wiser about booth and constituency management, putting in-charge three-four ministers per constituency keeping in mind the caste profile of the seats up for grabs. Each district office bearer was given the target of mobilizing 150 families in his area and to monitor each member of those families.

The party did not hesitate to use strong-arm tactics as also the local bureaucracy to achieve its objective. Voters also did not mind voting SP candidates as many BJP candidates faced hostility from their own party leaders, especially local MPs who felt offended as their recommendations were not given weightage in candidate selection.

So, SP would do well not to interpret by-election results as popular approval of its misrule in UP.

One does not really know how the Dalits voted, and drawing inference that SP would not have won this kind of victory without Dalit votes, may be fallacious. Why would they vote SP – a party with which the community is uncomfortably placed owing to conflicting economic and social relations between OBCs and Dalits? It is possible that Dalit participation was negligible in by-elections due to absence of BSP candidates, and some may have voted BJP – a party they supported in May LS elections.

But, this development could become a source of discomfort to Mayawati as repeated shifting of Dalit votes to BJP may lead to their permanent slippage – from BSP to BJP. Obviously, BJP is trying all out to keep Dalits to its fold by accommodating them in several party positions.

And, yes, OBCs, especially more-backwards and most-backwards, may have lost some mobilization motivation due to shifting of OBC leaders such as Kalyan Singh and Uma Bharati away from UP. This caste group had during the General Elections flocked to the BJP because of Modi’s positioning as an OBC leader. The move ended the natural monopoly of Mulayam Singh Yadav over OBC votes in UP.

Despite BJP’s poor performance in the by-elections, people seem generally connected with party’s top man, PM Narendra Modi. His hectic forays in the international arena and pragmatic policies on economic front have won him many supporters all over. But, there is a mismatch between peoples’ support for PM and his party, and that should be an element of discomfort to the BJP and its leadership.