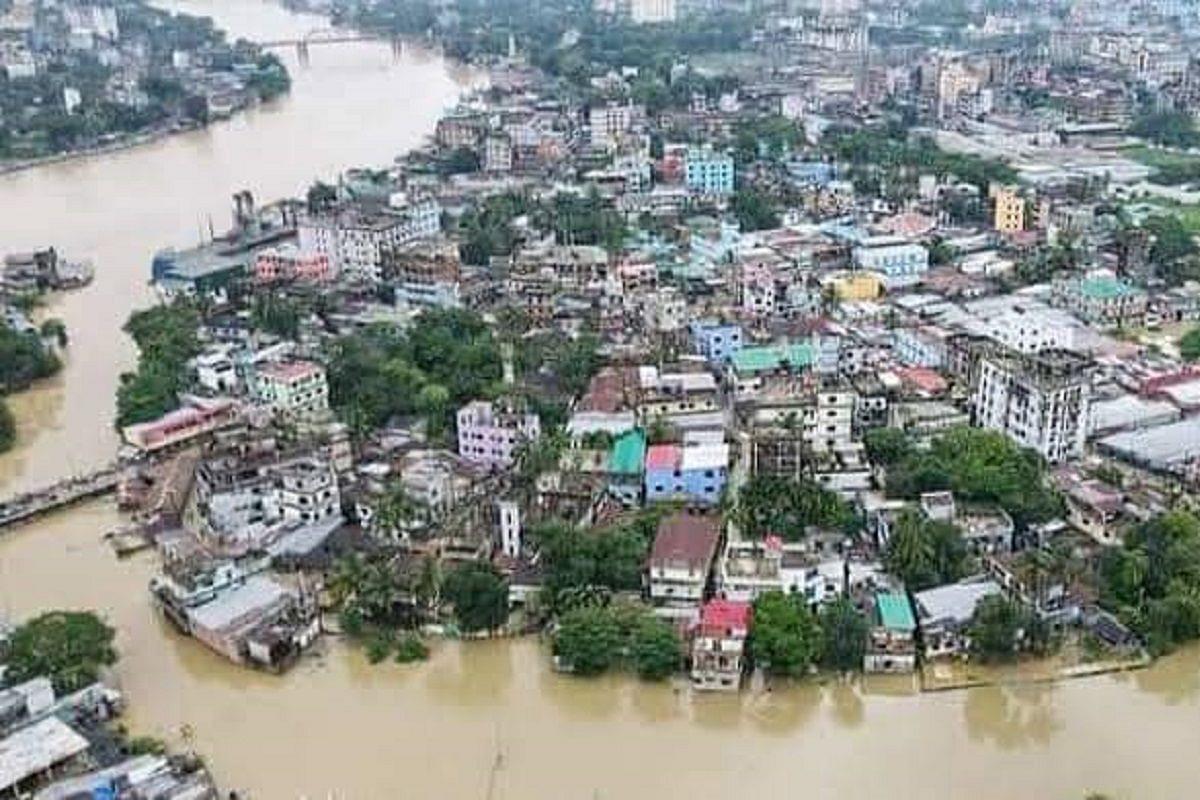 Incessant rains and gushing waters have marooned at least six million people in Bangladesh, prompting authorities to call in the Army to assist in the rescue and relief operations.

Officials estimate that six million people were marooned at their nearly inundated homes or were forced to take makeshift refuge elsewhere as water level in rivers in northeastern and northern regions continued to rise.

“Water now continued to surpass much above the danger lines in two of the country’s four major river basins… the situation appears to be nearly as bad as that of the 2004 flooding, a Flood Forecasting and Warning Centre (FFWC) spokesman said.

Many people were forced to initially take refuge on their rooftops amid gushing rising waters until rescue boats came in Sunamganj.

No official data was available on the death toll but unofficial reports suggest that the ongoing flood has killed at least 19 people in the country.
The FFWC attributed the flooding to excessive rainfalls simultaneously in upstream Meghlaya and Bangladesh.

The incessant downpours aggravated the miseries while the deluge severed the road links of northeastern Sunamganj district from the rest of the country and forced authorities to close a major international airport in neighbouring Sylhet after water submerged its runway.

Earlier, Bangladesh called in the Army to aide in the civil administration in evacuating people or reaching succours to marooned people while the Navy and the Air Force units subsequently joined them in northestern Sylhet region.

“The number of boats is inadequate to evacuate so Navy joined their hands while Air Force was called in to airlift relief materials in remote areas,” a district administration official in Sylhet said.

Deltaic Bangladesh is crisscrossed by 56 major rivers and several hundred tributaries with hydrologists dividing the country in four major basins.

The situation in Brahmaputra Basin aggravated overnight as the water level crossed the danger marks at many places in northern and some northwestern districts, an FFWC official said.

The disaster management ministry said the flood hit 17 of the country’s 64 administrative districts under the purview of the two basins.

Nearly 90 per cent homes in Sunamganj is now under water while in Sylhet the figure is estimated to be 80, according to TV channels.

“So far, there is no indication that the four basins will see the simultaneous rise of waters,” Bangladesh’s leading water expert Professor Ainun Nishat told PTI.

Bangladesh saw four major prolonged deluges since 1987 with the last one being in 2004.

Experts, however, said that unlike their previous major floods since 1987, the water level in all four basins might not surpass the danger levels simultaneously.