About Yoga And Yogis 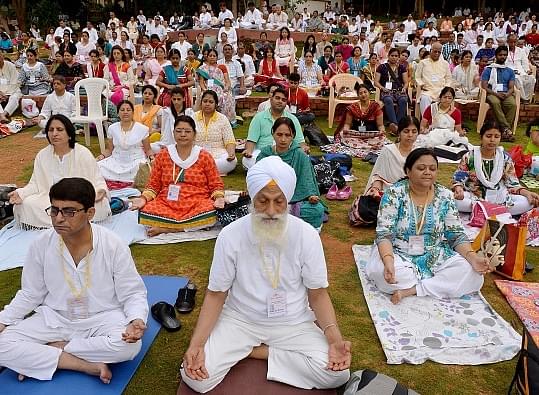 Among the sophisticated people in India, the hypocrites and the cheats unfortunately outnumber the truly pious people and the real yogis. One must say this publicly if only to protect good persons abroad who have exaggerated and erroneous notions about the spiritual atmosphere in present-day India and who should be warned against not only being disillusioned but against being defrauded.

Yoga is a technical term in Indian philosophy which primarily connotes a gradually perfected process of coordination of the human faculties and emotions towards a realisation of reality. The Bhagavad Gita is the holy book containing the clearest exposition of yoga in its correct sense.

According to the Gita, yoga is the state of mind that results from detachment in motion and serenity at rest. Yoga demands performance of duties in cooperation with society - but without being ‘contaminated’ by attachment to profitable results, without yielding to depression by reason of failure or to egotistic elation by reason of success.

The philosophies of life among all enlightened nations put the same emphasis on detachment and equanimity even as the Hindu philosophy of yoga does, and no special claim can be made on behalf of India, except that it has been the subject of a great deal of high level and closely reasoned thought in India from time immemorial.

The theistic approach of surrender and devotion to God is also an integral part of the Hindu doctrine and way of life, but without detriment to the emphasis on the rule as to work and how to work as above stated. The term yoga is applied to both doctrines, one is called bhakti yoga and the other karma yoga. The yogic teaching is to dedicate to God and His Will each duty done and each work accomplished with detachment. Step by step this is done, the whole of life gets surrendered unto. God and His Will bringing karma yoga (work with detachment) and bhakti yoga (devotion and surrender) together in one sequence.

There is a persistent notion that the Hindu way of life is based on fatalism and, that freewill and moral responsibility are not sufficiently emphasized. That this is a completely erroneous notion will be evident on a reading of the Gita, Chapter III, mantras 37-43 said in answer to men commit sin as if compelled to it:

Man’s enemy is desire born of the element of energy in the scheme of nature, insatiably ravenous and most wicked, it is the cause of all sin. This enemy of man attacks judgment and puts it out of action. As fire is surrounded by smoke, as a mirror is covered over by dust, so is judgment, with which is man is endowed, enveloped by desire. It seizes the senses and the will and finally judgement. It deceives taking many forms and disables the soul from attaining jnana. .’ Check the senses, therefore, at the very outset, O prince, and vanquish this evil thing that is the, enemy of all knowledge and enlightenment. The rebellious senses are governed ultimately by will and though, will can be guided by discrimination, this great enemy overwhelms discrimination by its evil strength, and puts it out of action. Realizing this danger, do thou exercise the, inherent strength of thy soul and defeat this-elusive and ‘terrible enemy and save thyself.

These verses of the Gita make it clear that the Gita way of life is not fatalism but thorough-going acceptance of moral responsibility to struggle with evil thoughts. Yoga demands the maintenance of a detached mind while participating in all the affairs that appertain to one’s place in society. The Gita-acharya does not want men to isolate themselves from society. All work should be done in the spirit of duty performed. Results should not be permitted to agitate the mind. The results do not belong to the doer but to God.

They may form the subjects of fresh duties, but should not be allowed to become cause for mental excitement. This unselfish and detached-attitude and, dedication of all work to God can and should be cultivated while we are diligently engaged in life’s, activities, like ordinary folk. “Practice this yoga and I shall enable you to overcome all difficulties.” This is Sri Krishna’s pledge as sworn to Arjuna in the Gita.

There was a great deal of psychological and physiological experimentation among the past generations of Indian men of religion in order to develop the full potentiality of the human nervous system. These researches naturally got mixed up with the yoga as expounded in the Gita. The consequent confusion is great especially for foreigners attracted to Hindu yoga.

The power-developing yogic practices have little to do with the the true yoga as expounded in the Gita and the other Hindu scriptures. It is the power-developing yoga practices which have lent themselves to the spurious claims and frauds to which I referred at the commencement of this article. Those who follow in their lives the yoga of detachment and devotion do not call themselves yogis. A good rule of guidance would be to be on guard against those who call themselves yogis.