When Onam Was A Big Festival In Tamil Lands 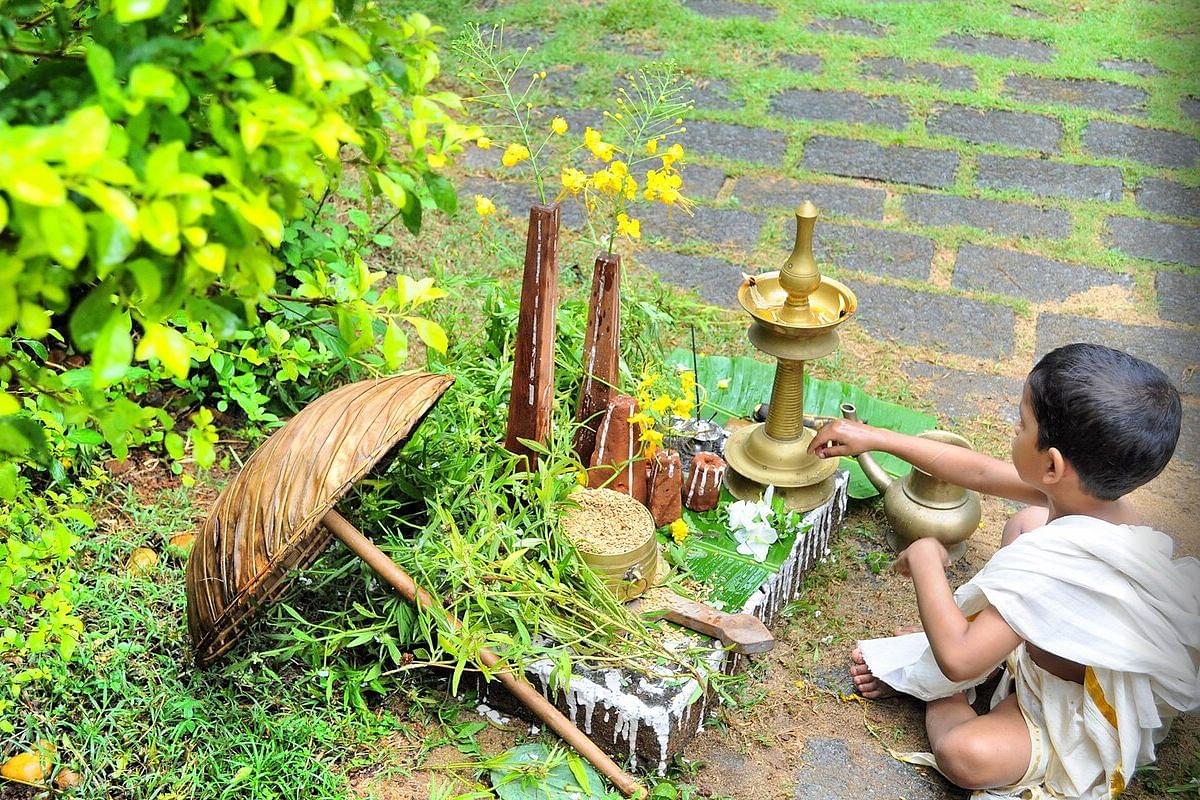 Maveli is worshipped as Onathappan during Onam festival. (Photo by Jinufilmmaker)

S. Padmanabhan beautifully describes the origin and different elements of the Onam festival of Kerala in this piece published in the September 4, 1976 edition of Swarajya. (Onam In Ancient Tamil Land)

India is a land of sacred shrines, holy rivers and imposing festivals. Among the festivals of Kerala, Thiruonam is the most important and it is celebrated for ten days with grandeur and magnificence irrespective of caste or creed. The Onam festival, which falls in the first month of the Malayalam year Chingam (Tamil month of Avani) is a national festival in Kerala.

The origin of the festival dates back to very early times. It is believed that the festival commemorates the vanquishing of King Mahabali who was deprived of his empire by Lord Vishnu in His Vamanavathara. The Devas, who became zealous of the peace and prosperity which prevailed in Mahabali’s reign, prayed to Lord Vishnu to rebuff the King. Vishnu, in the form of a Dwarf, appeared before Mahabali and asked for a plot of ground measuring three times his foot. With great pleasure the philanthropic King, without knowing what the consequences would be, acceded to His request. Assuming a gigantic stature, Vamana measured the universe twice length-wise and breadth-wise with his foot and found no place for the third. Mahabali bowed down and entreated the Lord to put His foot on his own head. Now, Vamana who and grown into Trivikrama, placed his foot upon the King’s head and pushed him down to the nether world.

The people were so grieved at the loss of their beloved King that they prayed to Lord Vishnu to allow him to visit the earth once in a year. Tradition has it that the visit is made on the day of Thiruonam during the month of Chingam. The story of Mahabali is narrated by the Tamil poet Nappoothanar in the opening lines of his work Mullaipattu in the Sangham Age. This incident is also referred to in Thirukkural and Silappathikaram.

We have literary evidence to show that the Onam festival was celebrated in ancient Tamil Nadu. From Madurai Kanchi, one of the Sangham works in Tamil literature, it is learnt that the Onam festival was celebrated in the city of Madurai by the Pandya King, Nedunchezhiyan of Talaialankanam and its citizens more than 1,500 years ago. The author, Mankudi Maruthanar, gives a fine description of the festival. Sitting in the royal courtyard the King used to offer valuable gifts to the poets, dancers, singers and warriors of his country. The elephant fight was an important part of the festival those days.

From the hyms at Thevaram of the seventh century A.D., we learn that the Onam festival is celebrated by the Saivites during the Tamil months of Aipassi in the temple of Kapaleeswarar at Mylapore (in Madras). According to Thirugnanasambandar, the important item of the festival is the grand feast. The Vaishnavite literature, Nalayira Divya Prabhandam, describes the Onam festival as a day of drums. Music played an important role in the festival.

Centuries ago Kerala formed a part of the Chera kingdom and subsequent to the long and bitter war between the Cheras and the Cholas the Kerala region separated itself from the mainstream of the Dravidian culture. Shut off from the rest of Tamil Nadu by the long range of the Western Ghats, Kerala has been able to preserve many old customs, ancient heritage and important festivals of Tamil Nadu.

During the Onam festival every home in Kerala gets bright and shining in preparation for the royal visit of Mahabali. For ten days the entrance to the house is decorated with atthappoo, an artistic design of flowers in different colours. In the morning of the Thiruonam a few conical images of Thirukkakarai representing Mahabali made from clay are placed on the ground after removing the flowers. The images are then decorated with rice flower and different varieties of Kollams. A lighted brass lamp (Vilakku) is kept in front of the image. All the members of the family dress up in their new clothes. Sweets are prepared and exchanged among friends and relatives. Ona sadya (feast) is an important item of the festival. Songs are sung and group dances are held to add to the event some rhythm and merriment. The head of the family has to give new clothes to all the members. In the evening the women deck themselves in white dhotis and blouses and take part in Kaikottukali, a beautiful rhythmic dance. Oonjal attam (swinging) is one of the popular pastimes among young women during these days. In many places shows of Kathakali, Ottamthullal, Mohiniattam and other folk dances are performed in the night.

The most colourful part of the Onam festival is the boat race held at various places. Different kinds of boats take part in these thrilling contests. The most famous among them are the snake boats locally called Chundans. The races held at Aranmula, Chenpakulam, Kottayam and Alleppey are very attractive. The races are accompanied by interesting and lilting songs known as Vanchipattu which describes the beauty of Kerala. Thousand of people flock to the banks of the river to witness the most colourful event and to cheer their favourite teams. The winners of the race are awarded several medals, the highest of which is the trophy instituted by Pandit Nehru in 1952. The Onam festival, the boat race and the Kathakali are the richest contributions of Kerala to the cultural heritage of our Motherland.

The festival that was celebrated by the Saivites and the Vaishnavites in ancient Tamil Nadu has become a national festival of Keralaites which is celebrated by all. The features of a socialist pattern of society which we are striving to usher in today are portrayed in the popular folk song in Malayalam which is sung during the Onam festival in Kerala:

All men are equal

None knew an evil—

How happy was their life!

Were unknown in this land;

Were true to the standard...