From The Archives: Ornate Architecture – To The Glory Of Southern Karnataka Temple Art 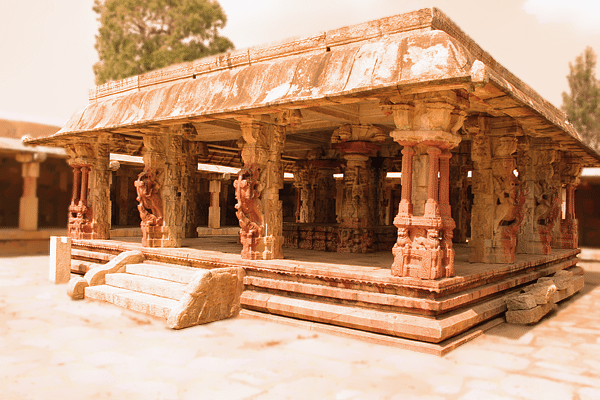 The Bhoganandisvara temple at Nandi, about 30 miles to the north of Bangalore, is a refutation of the charge made by James Fergusson that makers of Indian temples could not produce a coherent and harmonious composition when they added to the existing structures. This temple existed before 810 A.D., the date mentioned in one of the two relevant copper plate inscriptions. Additions were made under the Nolamba Pallavas, the Cholas, the Hoysalas, the Vijayanagar emperors and the Poligars. It could not have been very difficult to make a muddle of these things. In fact, however, the temple is perfectly conceived and most harmoniously integrated despite the long intervals of time when the additions were made. Actually, an old scholar was led into the belief that it was erected, as it stands today, in Pallava times.

The second of the copper plate epigraphs, also dated 810, states that Ratnavali, the beloved queen of King Bana Vidyadhara, and mother of Prince Banarar Dadda, huilt a Siva temple during the reign of the Ganga king, Jayateja. Ratnavali was probably a niece of Govinda III, the Rashtrakuta emperor, of whom a historian says, "One of the greatest monarchs of the line, his achievements go far to justify the· claim of his Court poets that after his birth - the Rashtrakutas became as unassailable as the Yadavas after the birth of Sri Krishna". The nucleus of the temple is the Bhoganandi shrine, one of three standing in a row. The fane, then, existed by about the beginning of the ninth century.

The first addition was made about 880 during the reign of Nolambadhiraja. According to a stone inscription in the temple, Puliyanna, son of Ainurvachari, received gifts for constructing a gopura in the courtyard. It is very likely that the Arunachalesvara shrine, the second of the three referred to above, was added about this time. This is an obvious inference from the presence on the walls of this shrine of Nolamba windows with sculpture. Mr Douglas Barrett says that "pierced stone windows to give a soft, diffused light to the hall (navaranga) and the antechamber to the shrine (sukhan(M'i)" are "perhaps the most notable features of Nolamba architecture". There are many such windows in this shrine. An image in one at these, that of Tandavesvara, as Nataraja was called, carries an inscription which, palaeographically, can be assigned to the ninth century.

An even more obvious addition was made in the eleventh century when this part of Karnataka was under the Cholas. Tamil inscriptions of Rajendra I appear on the platform of a Nandi shrine, which was added in front of the Bhoganandi shrine. It is probable that the corresponding Nandi shrine in front of the shrine of Arunachalesvara, was also added about this time. More Chola Tamil epigraphs, of the times of Rajadhiraja and Kulothunga I, are to be found in the temple.

The third addition, the kalyana mandapa, a wonderful creation, followed, when exactly it is difficult to say. There is no inscriptional evidence. The mandapa must have been built in late Hoysala times or early in the Vijayanagar epoch. This is to be deduced from its stylistic features. In its own way, this evidence is incontrovertible. The mandapa is much the most minutely sculptured part of the temple, a clear indication of Hoysala origin, though, as it happens, the stone is not soapstone, but hard granite. It may be assigned to the middle of the fourteenth century.

The largest additions were made in the heyday of Vijayanagar greatness. The most important of these was the shrine of Umamahesvara, built between those of Bhoganandisvara and Arunachalesvara. The western part of the mukhamandapa and a stone screen behind the new Umamahesvara shrine were added. Probably a little later were built the shrines, behind the main ones, of Apitakujamba, the Consort of Arunachalesvara, and of Prasanna Parvathi or Girijamba, the Consort of Bhoganandisvara.Also built at this time were the eastern part of the mukhamandapa, the inner courtyard and the present gopum.

The temple received its final and present form in Poligar times when two other courtyards were added. Thus, in about a millennium, what was originally a small shrine developed into the impressive complex that we admire today.

Of Bana origin, and added to in the Nolomba, Chola, Hoysala, Vijayanagar, and Poligar times, of which Chola and Hoysala are rather disparate, with their different ethoses, the temple ran the risk of being an uncoordinated, inharmonious structure. In fact, it is one artistic whole with no part of it looking out of place.

This harmony of spirit is not 'the only artistic reward of this temple which, while held in' reverence in Southern Karnataka, deserves to be better known wherever lovely temple art is appreciated. There are others, the Nolamba windows, the truly gorgeous pillars and the exuberance of sculpture in the kalyana mandapa. The architecture of the Bhogananelisvara and Arunachalesvara shrines also is worthy of notice. These are among the finest structures in the Dravidian style in Karnataka, where the common mode is the Chalukyan and its derivative, the Hoysala.

The most striking Nolamba windows are at Hemavathi, which was the capital of the Nolamba Pallavas. But those at Nandi are not much inferior. They contain floral or geometrical designs in which a divine image is, as it was, embedded. Two of these windows contain images of Nataraja and Shanmukha.

Architecture becomes sculpture in the breathtaking kalyana mandapa. There is an astonishing profusion of adornment, not unlike that found in the Hoysala temples of Belur and Halebid. The pillars are the most important features of this decorativeness. Each pillar consists of a large central part and smaller portions on either side. The base is carved with dancing and singing Yakshas and men riding lions. There are floral scrolls issuing from vases, with innumerable birds pecking at the flowers. Pendent lotus buds appear in the capitals together with divine images and, again, birds. Some of the columns in the mukhamandapa carry 16-sided shafts decorated with flower and leaf hands and also mouldings bearing relievos.

The temple extends over a large area what with its many courtyards. At its back rise the Nandi Hills, where there is the temple of Yoganandisvara, a comparatively plain structure of Chola times, probably erected about the same time as the Nandi pavilions of Rajendra I in the eleventh century.

As a living centre of faith, the temple is one of the glories of southern Karnataka Hinduism.