From The Archives: Rabindranath And Radhakrishnan 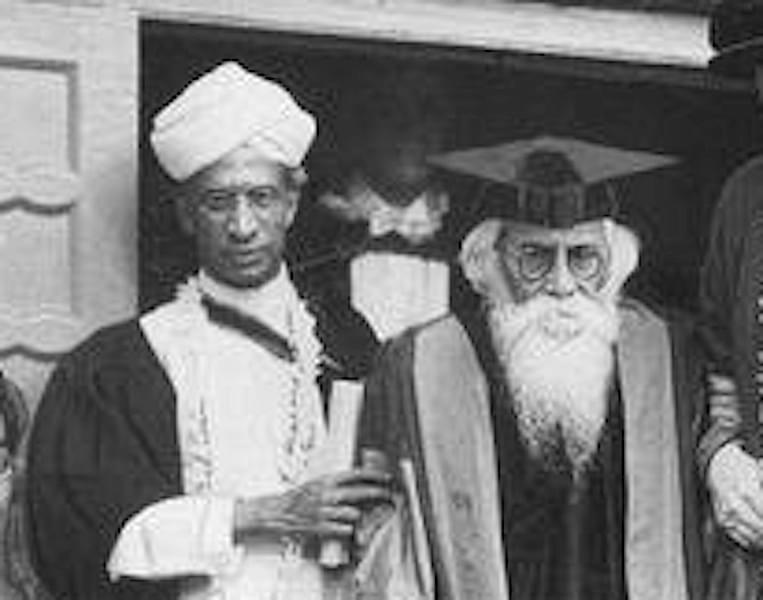 Dr Sarpevalli Radhakrishnan is reputed to have been an eminent philosopher, an astute statesman and a brilliant orator. What is not generally known is that he made great contribution in publicising the literary works of Rabindranath Tagore among non-Bengali readers in India and abroad.

Scholarship Of A Higher Order

It was on record that the poet was pleasantly surprised at the “earnestness of endeavour” which the treatise revealed and wrote to Dr Radhakrishnan in December, 1918: “Though my criticism of a book may not be seriously accepted, I can say that it surpassed my expectation. The earnestness of your endeavour and your penetration have amazed me, and I am thankful to you for the literary grace of its language which is so beautifully free from all technical jargon and a display of scholarship.” When Dr Radhakrishnan came to hold the Chair of Mental and Moral Philosophy at the University of Calcutta, he took a prominent part in the election of the Poet-Philosopher as the President of the first session of the Indian Philosophical Congress which began its session on 19th December, 1925.

Dr Radhakrishnan made a profound study of Rabindranath’s writings. In the course of his essay “Rabindranath and the Western World”, he aptly remarks; “In all Rabindranath’s works, three features are striking: (1) the ultimateness of spiritual values to be obtained by inward honesty and the cultivation of inner life, (2) the futility of mere negation or renunciation and the need for a holy or whole development of life and (3) the positive attitude of sympathy for all, even the lowly and the lost. It is a matter for satisfaction to find an Indian leader insisting on these real values of life at a time when so many old things are crumbling down and a thousand new ones are springing up.”

Incidentally, Dr Radhakrishnan opened and presided over, on 26th December, 1931, the second day’s conference to observe Tagore’s Septuagenary celebrations. It was attended by eminent Indian and European scholars, artists and litterateurs from all parts of India, including distinguished delegates from different universities. They read papers on and dealt with different aspects of Rabindranath’s contribution not only to Bengali literature but practically to all spheres of human thought.

Rabindranth Tagore was the first Indian to be invited to deliver the Hibbert lectures at Oxford University in 1928 but he could not do so due to ill-health. In 1929 Dr Radhakrishnan, who was then Professor of Philosophy at the Calcutta University, became the first Indian to deliver the same lectures. At the conclusion of the oration, Sir William Collins warmly congratulated the Calcutta University on having on its Faculty such a brilliant professor and expressed a fervent desire to have such a teacher at his own university (Oxford). The poet delivered the Hibbert Lectures, later published by Allen and Unwin on “The Religion of Man” in 1930 at Manchester College, Oxford.

According to Dr Radhakrishnan, Tagore’s Hibbert lectures on “The Religion of Man” ask us to realise the Supreme in the “heart of us all.” The Principal of the University College, Sir Michael Sadler, had this to say on the poet’s oration: “We shall never forget in Oxford the gift you have given us and the inspiration you have brought to us.” In the same year, the Oxford University accorded a formal reception to Rabindranath and Radhakrishnan.

The Oxford University held a special convocation at Santiniketan on August 7, 1940, to confer on the octogenarian, Rabindranath Tagore, the honorary degree of Doctor of Literature. Sir Maurice Gwyer, Chief Justice of India, Dr Radhakrishnan and Mr Justice Hendersen, of the Calcutta High Court, represented Oxford at the ceremony. As the University acknowledged so completely in its homage to him, he was “the myriad-minded poet and writer, the musician famous in its art, the philosopher proved in both word and deed, the fervent upholder of learning and sound doctrine, the ardent defender of public liberties one, who, by the sanctity of his life and character, has won for himself the praise of all mankind.” The public orator in Oxford, in presenting Dr Sarpevalli Radhakrishnan before the convocation of the University where he had been Spalding Professor of Eastern Religion and Ethics, for a considerable period of time, said: “We seem to have found the philosopher-king of whom Plato dreamed.”

Indeed, Heads of State and religion, the greatest seats of learning and the most eminent and exclusive academic bodies vied with one another and felt themselves greatly honoured in showering honours on the poet-philosopher and the philosopher statesman. Rabindranath Tagore passed away nearly three decades and a half ago. Sarvepalli Radhakrishnan breathed his last on 17th April, 1975. But the message of humanity and the spirit of universal brotherhood which they so eloquently preached will continue to inspire generations.