Kerala Letters: The CPI(M) And The Law 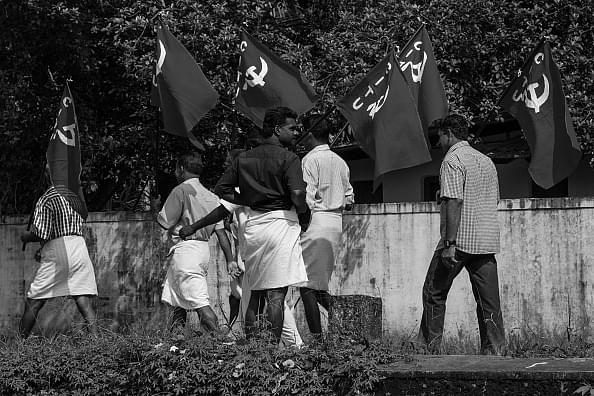 Left Communist leaders utterances definitely tend to foster anarchy. Some time back the Transport Minister, Sri E K Imbichi Bava, said that the Constitution and courts are stumbling-blocks and that the United Front (UF) government should not have come to power in the way it did (suggesting that it should have come in by a revolution). Sri M. S. Namboodripad was hard put to it to justify his colleague's statement, but he explained that revolution does not mean violence. The Mathrubhoomi of July 14 reports a speech of Sri A. K. Gopalan at Alleppey on July 12:

“Sri A. K. Gopalan addressing a public meeting the previous night said that the governments of Kerala and Bengal in which the Marxist Communist Party participates are weapons of struggle for the people. Sri Gopalan declared that they will certainly get hold of agricultural lands if the government fails to give agriculturists land. "Whoever may oppose, that will happen," Sri Gopalan said. He recalled the struggle in Telengana. "If the agriculturists' struggle in one place is suppressed, it will raise its head in another place. That is what happened in Naxalbari." He recalled that there are four Iakhs acres of waste land in Kerala.

"Sri Gopalan asked, what is the good of raising questions in the Assembly or sending complaints if one man offends another? Victims should be able to retaliate against the offender. If a man is not strong enough to do it, what people should do is to organize themselves. He is of the view that offences will automatically fall in number if there is awareness that blows will be returned. It is futile to run after officials and police, instead. The police and military and courts here stand only for the janmis (landlords). The officers and police should have the fear that today a government that will protect the interests of the toiler is in the saddle. Many complaints are being received about the police. The police should behave in such a way as to make people realize that the policy of the police has changed.

"Touching gherao, he said that it was only peaceful picketing. The papers give much prominence to Naxalbari and gheraos. But there is nothing new in these. Government fixes minimum wages for labour. Employers do not pay them. They go to courts, and courts say that they need not pay minimum wages. What is the remedy except gherao? This is Sri Gopalan's counter to those who say that gheraos are unlawful. Is it not unlawful not to pay wages to employees? The police and military give protection only to janmis and employers. People must be able to look after their own interests and get them. There should be strong agitation against this state of affairs. You must see the governments in Bengal and Kerala as weapons.

There may be objection to Mr. Gopalan's statement that victims of offences should be able to retaliate, but there can be no exception if blows are returned then and there. Macaulay said that the greatest defect in Indian character is meekness. The owners of land remained passive onlookers when their land was trespassed upon and taken possession of by Communists in the 24-Parganas. They would have been perfectly justified if they had exercised their right of private defence and killed the trespassers, if need arose. If they themselves had been killed, they would have been martyrs who died defending the rule of law.

But this is the very reverse of what Sri Gopalan meant.

It is not known where he got the information that there are 4 lakhs acres of waste land in Kerala, nor does the report disclose whether they are arable or not. If it is arable waste belonging to government, the government should assign it to farmers for cultivation, but it should not be made an excuse for wasting public funds as loans or grants. If private land suitable for cultivation is lying waste, government should ascertain why it is uncultivated. If it is because cultivation is uneconomic, it should ascertain whether it could be made economical by providing irrigation or other facilities, and give the owner the option to cultivate it or acquire it after paying full compensation. It is unjust, unlawful and against public interests to encourage goondas to trespass on private holdings as it happened in 24-Parganas. That it was done under the leadership of some MLAs makes things more ominous.

If, however, the Communist leader's thesis is that Naxalbari or 24-Parganas should be copied in Kerala the rule of law requires that India-should copy Thailand, where, according to a Reuter report dated July 15, people can "shoot at sight a Communist carrying arms.

Communist leaders possessing extensive paddy fields are becoming victims of their own paddy control measures and unable to devise excuses for evasion demanded by self-interest. In the meantime rice is selling in the open market at over Rs 2.10 a litre! When are we going to learn that controls are running knots we pull round our necks, and the more we pull, the more we are strangled?

This letter appeared in Swarajya in the July 29, 1967 issue.