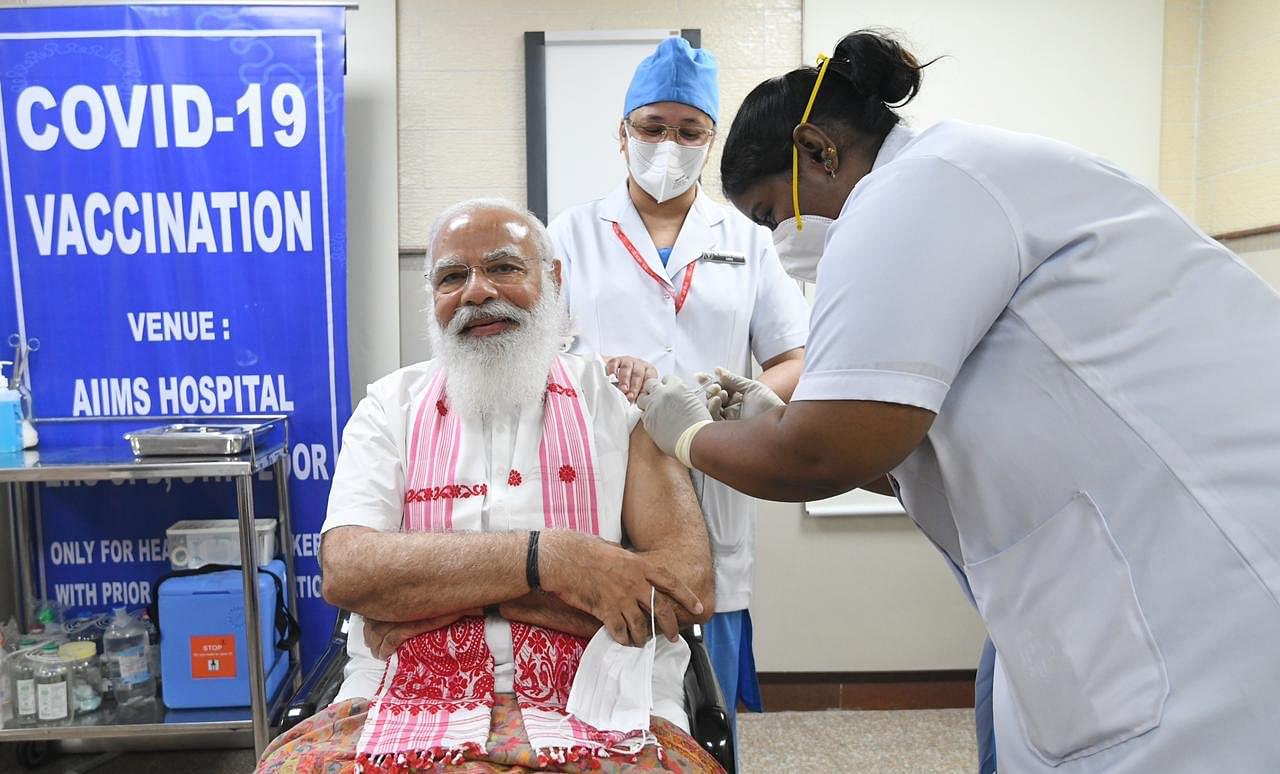 PM Modi receives his vaccination against Covid-19. (Pic Via Twitter)

Yesterday (21 October), India crossed the remarkable milestone of 100 crore Covid-19 vaccinations. What makes this achievement especially impressive is that it was achieved in only nine months of the start of the drive. This is a testament to the state capacity of India and proves once again how efficient it can be when it sets its eyes on executing a particular project.

As we celebrate this stupendous accomplishment, there are four things that need to be realised.

First, while one has to appreciate the Narendra Modi-led government for delivering on the execution front and especially the brilliant way it used technology and developed the CoWin platform, the man who deserves overwhelming credit for the vaccine century, is Adar Poonawalla whose Serum Institute of India (SII) is responsible for around 88 per cent of total doses administered in the country so far. It’s for this reason that this author had advocated that India awards Padma Vibhushan to him or Bharat Ratna to SII which would set a new precedent to recognise such important institutional assets of the nation.

Given that SII’s’ monthly production has increased to 20-22 crore in August, it has already met its target in half the time meaning that it will be delivering more than double of its 50 crore expectation by this year’s end. It’s also pertinent to note that SII is also producing Novavax’s Covavax for the last few months so that it can start supplying as soon as it gets the approval.

Bharat Biotech’s monthly production has increased to 5 crore only this month and it was 3.5 crore for September, the company would be able to deliver only 50-60 per cent of its 40 crore doses target. All the rest put together don’t amount to even 1 crore doses and given the pace at which they are moving, we can only expect some doses from them next year.

Essentially, SII has not only delivered on what the government was expecting from it but also compensated for the failures of every other vaccine manufacturer be it Bharat Biotech, Zydus Cadila, Sputnik V suppliers or Biological E. One hopes that these figures give some perspective to those celebrating the success and underscore the all important role played by SII.

Second, the critics of the government and the ‘professional pessimists‘ will now shift goalpost from ‘not enough vaccines to cover adult population by year end’ to ‘very low percentage of fully vaccinated adults‘ (or low percentage of total population to show India in even poorer light). It’s only a matter of time before the clamour to vaccinate all children before the end of 2021-22 academic session starts.

Given that almost 90 per cent of the recipients had Covishield, this statistic is suffice to give perspective to those with proclivity to indulge in constant whining. Also, it would be good if one future-proofs the criticism by estimating the percentage that will be fully covered by the year end.

By 1 October, 65 crore had received one dose, so we can expect that by New Year’s eve, slightly less than that number will be jabbed with both the doses. We have administered 75 per cent of adult population with at least one dose (The US’s figure is 79 per cent). Assuming that only 60 crore people are fully vaccinated on 1 January 2022, this translates to about 70 per cent coverage (which will be the same as US’s number).

Of course, dose 1 numbers will keep increasing and reach beyond 80 per cent coverage. That’s the upper end of what we initially expected without vaccine hesitancy. So, whether someone likes it or not, India would enter 2022 with wildly successfully Covid-19 vaccination programme.

Third, the biggest signal of vaccination drive reaching its end is the slowing pace of daily vaccinations. That’s what is happening in India as well. In first 21 days of September, we had jabbed 17 crore people. In October, that number is only 11.5 crore. Dose 2 numbers have started exceeding Dose 1 numbers and that’s going to be the trend going forward.

Here, there is a risk that due to much longer gap between the doses, some people may not return due to complacency or other reasons. Hence, it’s time now that the vaccination drive moves away from centres to people’s homes. A targeted campaign should be run for those who are due for their second dose and they can be offered to be jabbed from the comfort of their home. To further boost the Dose 1 coverage, door to door vaccination service is the best method to adopt now.

Fourth, estimating that 65 crore people can be fully vaccinated (at max) by this year’s end and Dose 1 coverage reaches 75 crore (80 per cent of total adult population), this means that we will be needing around 40 crore doses until new year (on the higher side). With monthly capacity already at 25 crore and around 11 crore doses still in stock with the states, it gives India enough space to indulge in smart vaccine diplomacy and also allow Serum to meet its prior international commitments. We can hope to export 20-25 crore doses by this year’s end. With a total export of 30 crore doses (including 6.5 crore doses supplied earlier), image of India as the biggest force for good during the Covid-19 pandemic would be burnished.