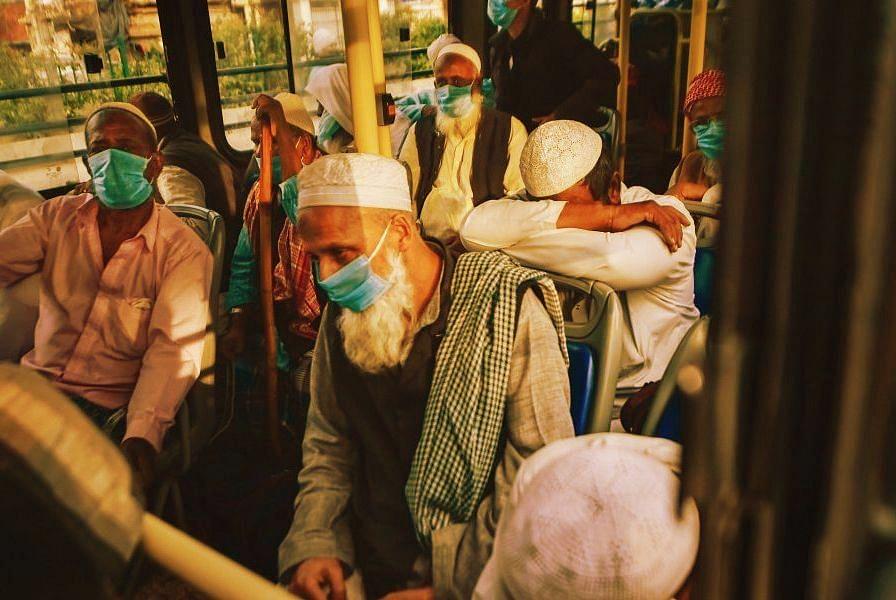 The Nizamuddin Markaz in New Delhi where Islamic preachers of Tablighi Jamaat congregated in hundreds has emerged as the biggest vector for the spread of Covid-19 in India.

According to official numbers put out by the Minister of Health and Family Welfare, out of 2,301 cases reported, 647 are now being linked to this single cluster, which translates to a whopping 28 per cent of the cases caused by a single event.

Of course, these are not the final numbers and tests of scores of people who were present at the Markaz are awaited.

While everyone is more focused on the case load the Markaz is contributing to overall numbers, one more aspect that needs attention is the mortality figures.

Telangana has reported nine deaths and all had attended Nizamuddin Markaz. Yesterday (2 April), Delhi reported four deaths, two of which were of people who were in the Markaz. The share of deaths linked to Nizamuddin cluster as percentage of total casualties in high.

Telangana Chief Minister K Chandrashekar Rao said in a media briefing that the virus that has attacked the people who attended the Nizamuddin meeting “appears to be more virulent than the ones that afflicted people who had returned from foreign trips earlier on as is evident from the fact that they (foreign returnees) are all on the road to recovery”.

And this could be the reason why we are seeing so many who attended Tablighi congregation are succumbing to the virus. Of course, one factor is many of these maulvis are old and have other health issues.

But one other critical factor could be the viral load.

As some reports on the lifestyle inside such congregations by Tablighi Jamaat suggest, the attendees live in close proximity to each other under very unhygienic conditions, even using the same utensils for eating without washing them first.

So, if anyone is infected inside, there are not only chances of most of other residents getting infected but infected with larger amounts of virus in the beginning itself. And more the exposure to virus particles (viral load), higher the severity of illness.

Viral load refers to the number of viral particles carried by a patient and shed into the environment by the process of coughing, sneezing, talking, etc.

“The viral load is a measure of how bright the fire is burning in an individual,” explains Edward Parker of the London School of Hygiene and Tropical Medicine.

“As with any other poison, viruses are usually more dangerous in larger amounts. Small initial exposures tend to lead to mild or asymptomatic infections, while larger doses can be lethal,” write Joshua D Rabinowitz, a professor of chemistry and genomics, and Caroline R Bartman, a genomic researcher with the New York Times.

Dr Ellen Foxman, assistant professor of laboratory medicine and immunobiology at Yale School of Medicine, told New York Magazine in an interview that in human to human transmission “the amount of virus you are exposed to impacts how likely you are to become infected.”

“If there’s one virus on a doorknob, you’re much less likely to get sick from touching the doorknob than if there are 1,000 viruses on that doorknob. With a bigger exposure, some of the viruses are more likely to actually get into your airway and find a place to replicate. If you’re exposed to no virus at all, you’re not going to get sick. If you’re exposed to one little viral particle, you probably have a much lower chance of becoming infected than if you are right next to someone on an airplane who is coughing for eight hours,” she says.

The practice of taking virus from an infected person and injecting tiny and controlled amounts into healthy individuals as a form of inoculation is quite old in medicine.

Siddhartha Mukherjee, cancer physician and author, narrates how the Chinese discovered a way to inoculate people against smallpox.

“As early as 1100, medical healers in China had realized that those who survived smallpox did not catch the illness again (survivors of the disease were enlisted to take care of new victims), and inferred that the exposure of the body to an illness protected it from future instances of that illness. Chinese doctors would grind smallpox scabs into a powder and insufflate it into a child’s nostril with a long silver pipe,” he writes.

While we wait for more quantitative and qualitative studies on coronavirus, research done on other viruses which cause influenza, SARS, Crimean-Congo hemorrhagic fever, measles, etc, shows a strong association between the intensity of exposure and the intensity of disease as Mukherjee discusses in his piece for The New Yorker.

Harvard virologist Dan Barouch, whose lab is working on a vaccine against the novel coronavirus, says that “logically, the larger amount of virus should trigger more severe disease by prompting a brisker inflammatory response. But that is still speculative. The relationship between initial viral dose and severity remains to be seen.”

The novel coronavirus (SARS CoV2) is genetically a close cousin of SARS CoV1 and severity of illness was linked to higher level of virus exposure in the case of latter.

“On the basis of previous work on SARS and MERS coronaviruses, we know that exposure to higher doses are associated with a worse outcome and this may be likely in the case of Covid-19 as well,” says Willem van Schaik, professor in microbiology and infection at the University of Birmingham.

Professor Wendy Barclay, head of the department of infectious disease, Imperial College London, says: “in general with respiratory viruses, the outcome of infection – whether you get severely ill or only get a mild cold – can sometimes be determined by how much virus actually got into your body and started the infection off.  It’s all about the size of the armies on each side of the battle, a very large virus army is difficult for our immune system’s army to fight off.”

The viral load could be the reason why so many doctors and healthcare workers are getting the infection (5,000 in Italy and 3,000 in China): they are constantly exposed to the virus. There have been reports of even young doctors who had no health issues succumbing to the virus. This could be attributed to not just constant exposure but also the large quantities of virus the workers are getting exposed to.

It has three lessons for us:

1) All healthcare workers should get good quality personal protection equipment, including masks, which are enough in numbers that they don’t have to use the same ones again and again.

2) India moves towards manufacturing or buying at least 100 crore masks for its population so that people when they return to work wear them and lessen the exposure to viral load from infected patients. If the infected person (who is asymptomatic) also wears mask, this will reduce the chances of others getting infection. 'Masks for all' should be our motto.

3) One set of healthcare workers should not be assigned long shifts. Rather, the hospitals should involve as much staff as possible to look after the patients, and shifts should be shorter so that exposure to viral load can be reduced.