Kashipath 2019 Day 2: At Hampi — Where A Great Civilisation Stood Proudly And Dharma Flourished Amidst Invasions 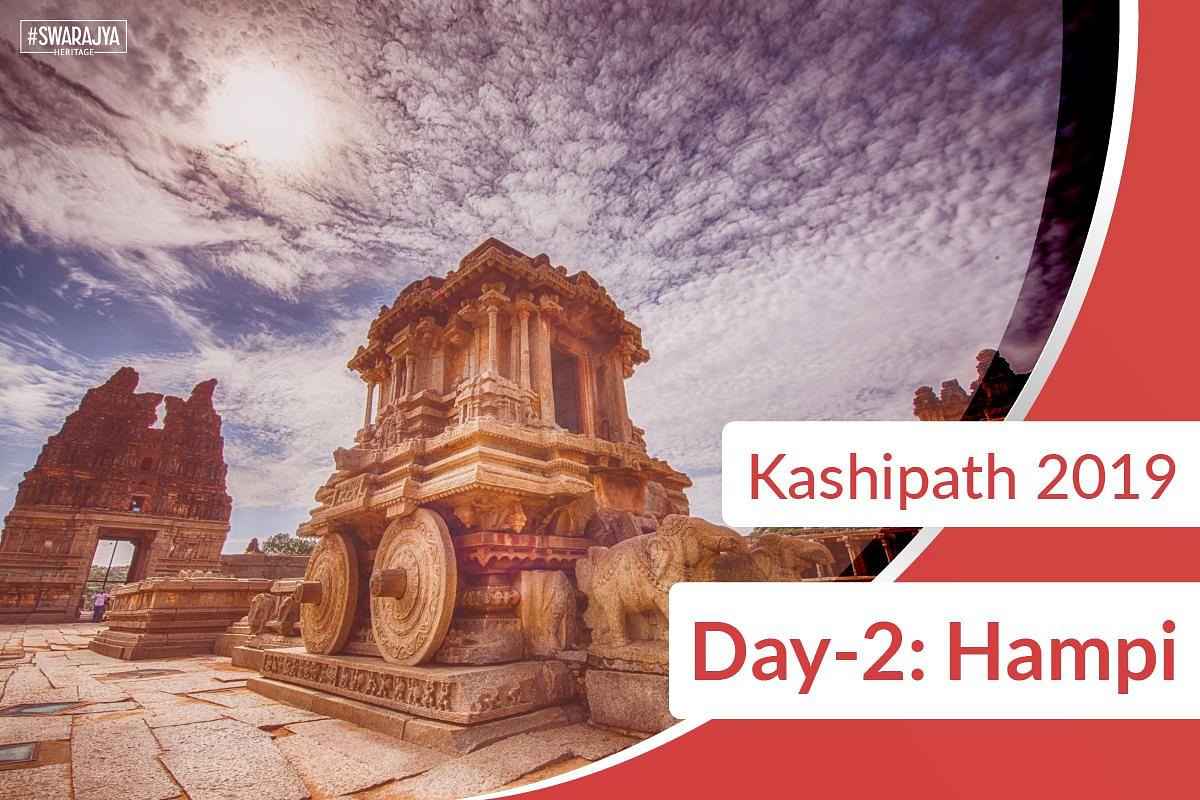 As Day Two of Kashipath 2019 dawns, we are at Hampi — the capital city of Vijayangar.

The city has a sense of magnificence mixed with melancholy. The ruins as they stand today remind one of the grandeur that used to be this great Hindu empire of the south.

With just one day in hand, it is impossible to comprehend even a fraction of the greatness of this place. Hence, we decided we would concentrate only on the royal enclosures. It is still a decision very cruel to ourselves.

The empire was primarily founded to protect and nurture Dharma in the regions south of the Vindhya mountains and serve as a bulwark against invasions and persecution of Dharmic communities.

Vijayanagara empire definitely did its work. Even when meeting with treacherous defeats and horrible consequences, the empire did usher in quite a number of federal kingdoms, which in their own way, continued the legacy till the British times and even during the colonial times like the Mysore royal state.

One should remember that this empire was built through the inspiration and blessings of the Advaitic seer Vidyaranya. Vidyaranya had renounced worldly affairs and had embraced Sannyasa. A mendicant living in the forest dedicating his life to pursue the non-differentiating state of consciousness — yet he felt for the nation. He felt the need to preserve and nurture this culture and nation.

And it was his blessing that made the famous Harihara and Bukka brothers not only establish the abode of victory but also free the entire south of the invaders’ intrusion.

If we in the south pride ourselves over having some of the finest artistic heritage in the world that has come to us unbroken from the very ancient past, and something unique in human history, then looking around at these ruins, we know to whom we should express our eternal gratitude.

Every towering Hindu temple in the South is a proclamation of Dharmic pride and it comes from Vijayanagar.

As one enters the grand platform where the Mahanavami celebrations used to be held, one can almost feel the jubilant mood that should have existed during the nine-day celebrations of the Goddess.

The huge structure built with massive stones also had huge wooden structures above, which were burnt by the invaders.

From the heaps of big stones that were left by the demolishers, centuries later, the Archaeological Survey of India (ASI) had done a marvellous job of putting the structure back.

We should thank the experts of ASI for the years of hard work they have done here.

Every prominently visible space of the structure had been used to depict some important aspects of those times.

One wonders if there is another civilisation that has domesticated so vastly across its varied geographical zones, such a huge animal as an elephant and integrated it with its daily life — both sacred and secular.

And there he is! Krishnadeva Raya — the greatest emperor of Vijayanagar — with his three queens attending some officials or dignitaries from other provinces.

Even in the walls of the back stage and steps to the platform, there are carvings which show various scenes like merchants mounted on camels, foreigners and entertainers.

On the other side of the wall, there are quite a number of depictions of women practising hunting and warfare.

There are also scenes of a woman seated on the throne dispensing justice to male prisoners.

The guide explains that with the constant wars against the Sultanate taking a heavy toll on the male population, the Vijayanagara empire had to train their women as well in both combat and more importantly, state craft.

We move on to see a fine bath tank structure. This was where usually, the privileged sections of the then society would take a bath.

Then we move on to Pushkarani — an aesthetically pleasing water pond. There is a stone pipe which brings the water and ushers it into the pond. This is a sacred pond to bathe the Goddess, and the temple that was standing before it had been destroyed.

Thanks to Savaari Cars: Rent a reliable car in and around Bangalore with an experienced driver

And then comes another structure which is a massive pond built exclusively for swimming. They used it for swimming competitions during Mahanavami, says the guide. It is indeed thrilling to visualise a team of swimmers competing in this structure filled with water. The drainage systems too can be seen.

Then there was a secret chamber, underneath a water tank, built to guard not just secret treasures. Interestingly, it was also meticulously sound proofed. A fiction writer dabbling in history would find the chamber quite alluring — a chamber of secrets indeed!

A ‘Puvana Jeyam’ or ‘victorious over the world’ platform is said to be the one in which the emperor would hold his durbar.

The platform shows quite a number of pillar bases. Perhaps, they supported another structure that had been destroyed.

But it does make one feel humbled to think that one stands in the same place where the best minds of that time had assembled.

Here, a great civilisation showed the world amidst all invasions, how proud it could stand and rule and emissaries from around the world bowed before it.

The fact is even to this day we stand. And the fact is also that to stand proud we need constantly the vision of Vidyaranya and the mission of the empire builders — from Harihara Bukka to Krishnadeva Raya to Shivaji.

We then enter the Hazara Rama temple. It contains the multitudes of Ramayana. And it starts poignantly with the episode of the helpless blind parents of Shravankumar cursing Dasaratha.

An emperor bows down to accept the curse of a helpless blind old couple — that is Dharma. The Upanishads declare that Dharma reigns above the king and that it provides power to the powerless.

Many Western and Westernised scholars again and again speak of Hindu kings building temples to ‘show their power’.

It has become part of our regular curriculum which speaks of temples purely in terms of the power of the State and its economic dimensions.

To them and to the generation which has come up fed on this indoctrination, one can only show this temple.

The entire Ramayana is about renouncing — renouncing power and renouncing worldly happiness and placing Dharma above everything else.

The scene depicting Bharata worshipping the footwear of Rama says it all. And the emperor even to celebrate his victory built a temple showing these scenes.

As one moves along through the maze of the depictions of various stages of Ramayana, one understands that a lifetime may not be enough to drink all the greatness of this wonderful epic.

Surely, the sculptors who carved it are blessed — whichever centuries they lived in, they indeed are blessed and their chisels still shape and sculpt the soul of this nation.

We rush to Ananthasayanam temple.

When the son of Krishnadevaraya was poisoned to death because of the political intrigue, he built this temple in the memory of his son.

The temple dedicated to Vishnu in his cosmic sleep of omniscience, has a sanctum sanctorum like none other.

It is very huge sans a Deity. One can only imagine and shudder at the thought of how the Vigraha should have been and how the temple would have become world famous had it continued as a living one.

The we go out of this temple ‘monument’ and as we capture the rays of the setting sun, it is impossible to not think — Why not revive this temple for its original use?

Why not reconsider recreating the Deity, making this place a place of worship, as the emperor and a grieving father originally intended this to be?