Kashipath 2019 Day-6: At Bhimbetka, Looking Through A Window Into The Dawn Of Human Civilisation 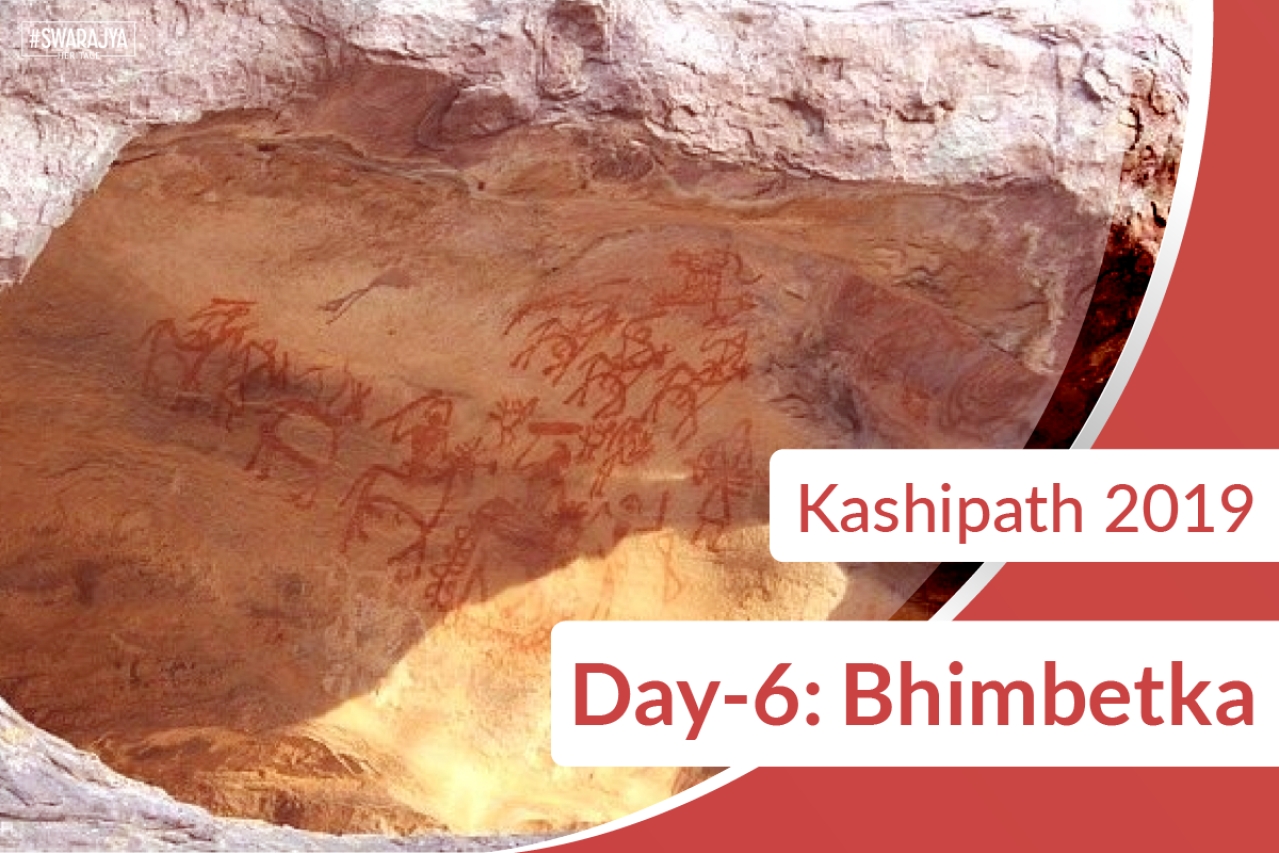 We enter the sixth day and we are travelling to Bhimbetka.

We pass through Bhopal, the land of lakes. The statue of Bhoja Raja majestically stands at the newly constructed Bhoja Sethu. Celebrating our great kings and emperors is an important aspect of our civilization.

Unfortunately, the Indian state under the ‘Discovery of India’ template tried to relegate every legendary emperor who ruled India to obscurity. Obsessed with history-centrism, only those for whom historians could find any evidence made it to the textbooks.

The collective memory of Indian people had no value in this historiography. Bhoja, who, again along with Vikramaditya, entire India knew for generations, was a victim of this historiography. It is fulfilling to see his statue; at last, he has been given the due importance he deserves.

The road to Bhimbetka is dusty and bumpy as the highway construction work is going on.

Thanks to our trip partner, Savaari Car Rentals: Rent a highly-rated car with driver in Bhopal

Rock arts are important documents of the dawn and childhood of human evolution – humans as we know them – what evolutionists called anatomically modern humans.

This dawn about which we know through prehistoric remains and rock arts is, as other profound things, shrouded in mystery. Today’s humans try to peep into this past through various means.

Bhimbetka provides, in that way, a very unique window into that deep past.

Bhimbetka means ‘where Bhima sat’ – named after a belief in the tribal community around that region that associates the Mahabharata hero with the place. The British explorers considered the site not to be very old and so were not much interested.

It was an Indian archeologist, Dr Vishnu Shridhar Wakankar (1919-1988) who observed the similarity of the cave formations to ones that house pre-historic paintings in France and Spain. So he decided to investigate.

He not only studied the paintings but also excavated the site and found microliths – ancient small stone tools. He also discovered ostrich egg beads. The Bhimbetka beads were found as ornaments in the neck of a dead man in a burial site. Clearly all these artifacts proved the considerable antiquity of Bhimbetka.

Dr Wakankar, who took a sustained interest in the site, proposed -- as early as in the 1950s -- a methodology to study the superimposed paintings (there are many layers of paintings) to really decipher what we have here at Bhimbetka.

The association with Mahabharata here has an amusing parallel: the Mahabharata too has layered texts just as the Bhimbetka caves have superimposed paintings of different ages – all important in their own way.

The study of the paintings was taken up by another great archeologist, Dr Yashodar Mathpal. Studying rock paintings is not a simple task.

In a painstaking effort that would span decades and consume the passion of a lifetime, Dr Mathpal copied and studied a total of 6,214 paintings made in 400 compositions on the ceilings of 133 rock-shelters, which had been made in 16 superimposed layers!

The point to be noted here is that the paintings were made almost continuously by people living in these rock shelters through various historical periods: from deep history to relatively ‘younger’ ancient history.

Today exciting studies are taking place at various places around the world that provide newer and fresher insights into the early human evolution and social transitions.

Consider, for example, the red pigment used in the rock paintings. The enduring capacity of this pigment used almost world-over by cave-dwelling people is amazing. Despite harsh weather, the paintings have survived for an astonishing 10,000 years or more. 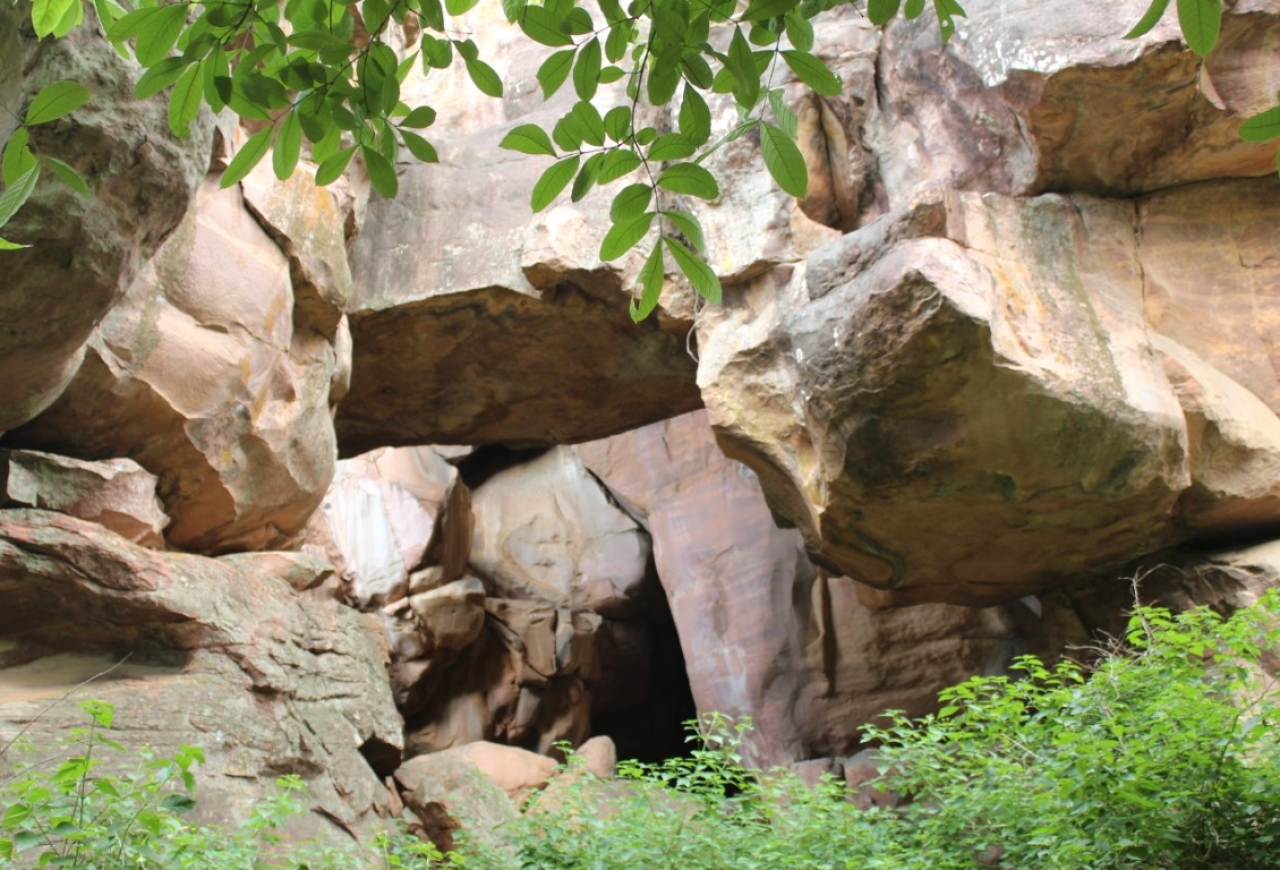 Brandi Macdonald -- a lead investigator of a recent study conducted on how these pigments were produced by the cave artists -- pointed out that our cave ancestors could have solved an important problem of our age: the production of highly thermo-stable paints for ceramic manufacturing or aerospace engineering.

So, as Lyall Watson said in another context, discovering our past can help us also invent our future.

I had visited Bhimbetka two years ago and found the place quite well maintained. It was a holiday and there was a moderate amount of people then – not much though. But there were no broken beer bottles as one would see at such sites in Tamil Nadu, I had noted.

This time I had the same experience. However, we saw a lot of artists copying the rock art – modern painters seeing the work of their counterparts of the stone age through early historical period. A bit surrealistic made real by the serving of tea.

Still, the serenity mixed with a positive eerie feeling clearly pervades the atmosphere. The Archeological Survey of India (ASI) should be thanked for the non-intrusive yet quality pathways they have constructed for the 13 rock shelters they have opened for public access. 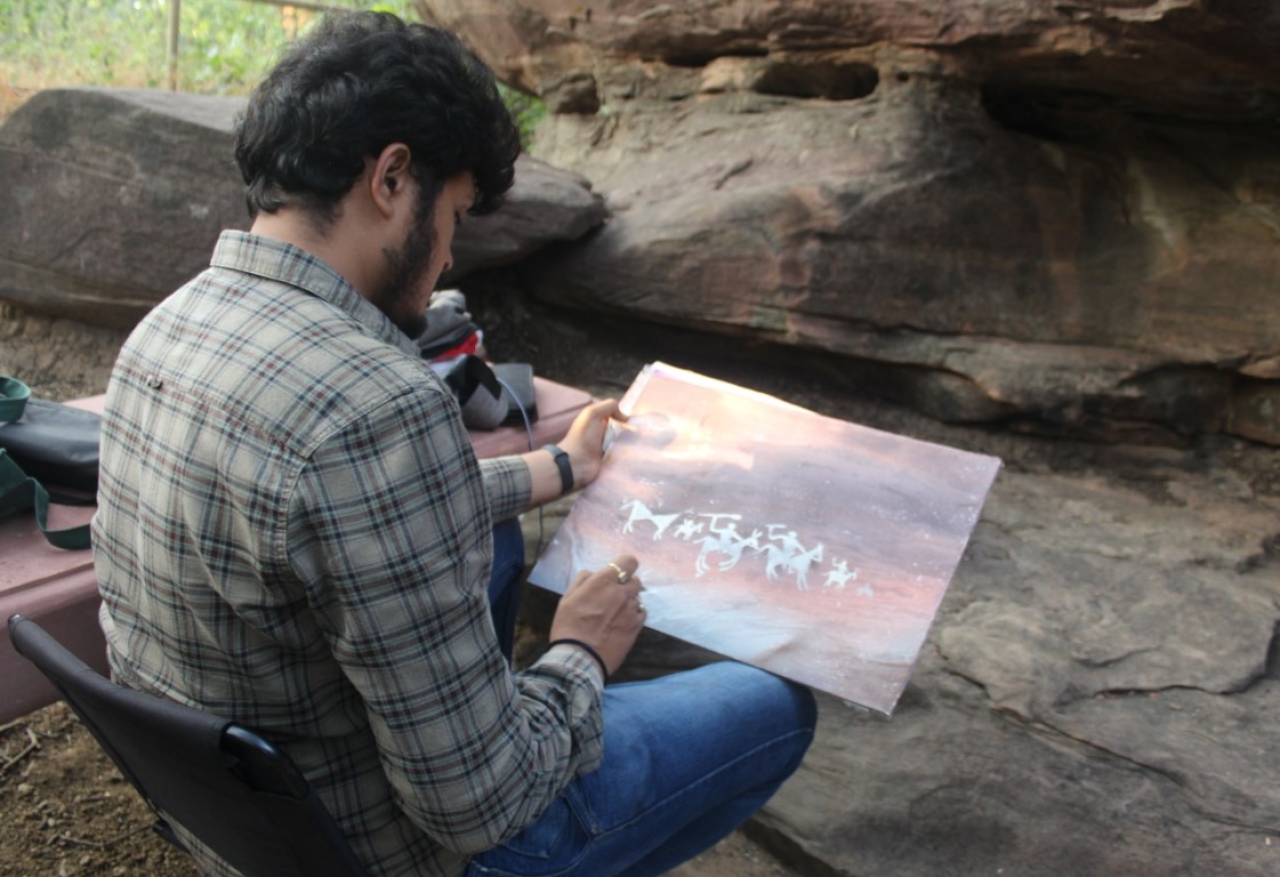 A modern-day artist capturing his ancient counterpart’s work at Bhimbetka.

As we walk through the rock shelters, we see not just the cave art but their continuity into our own cultural lives even today.

Consider, for example, the hand marks. This is a universal feature found in rock art throughout the world. And it continues even today, albeit in a ceremonial way, in our present customs and traditions.

During the Tamizh month of Karthikai, on the day of celebration of Pleaides for Murugan, in Tamizh houses we see the hand marks placed on walls or on the floor. In many places throughout India, we can see such hand marks made by dipping the hands in turmeric -- mainly by women -- as marks of auspiciousness.

You can see in the insert of the picture below, a hand mark at a shop we saw on our way to Ujjain. Not many cultures can show such continuity today in the world. 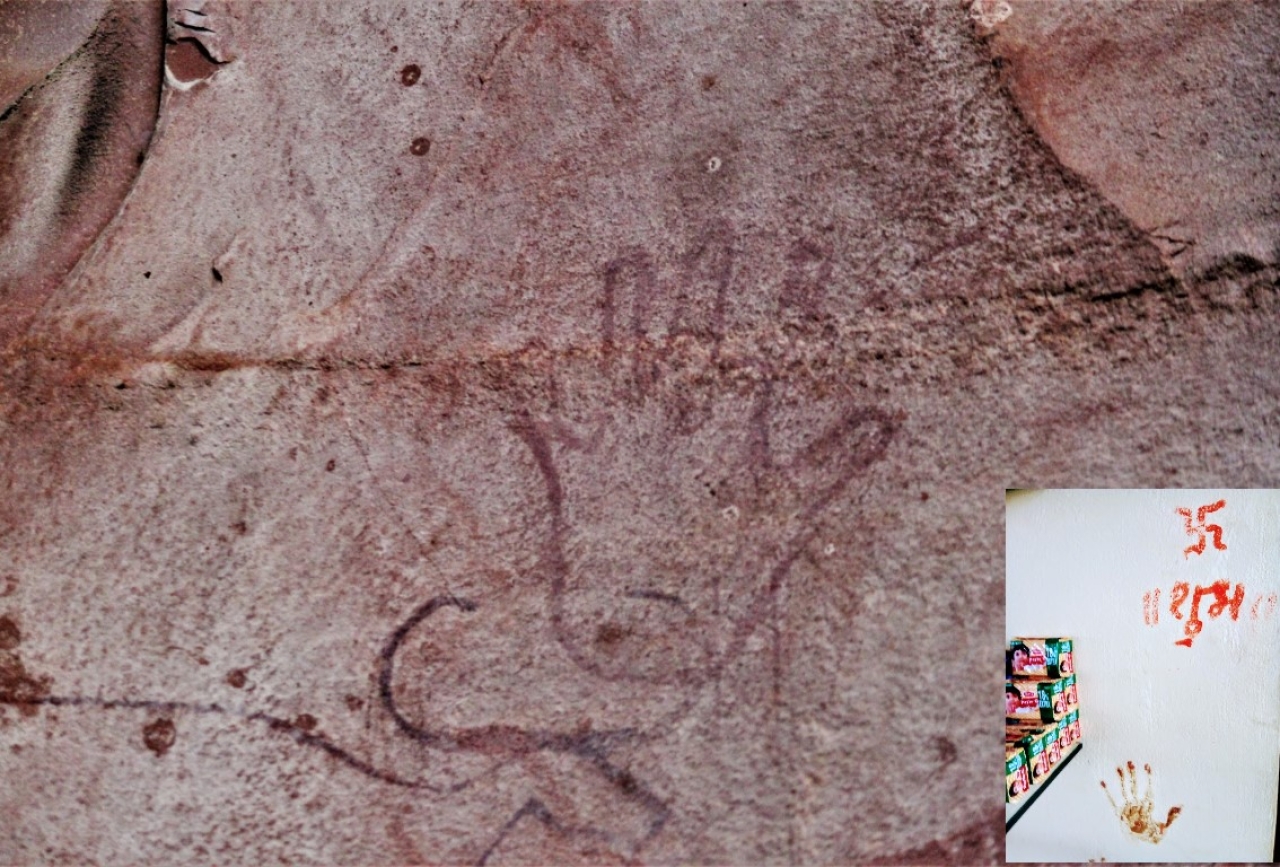 Similarly, look at the seven dancers (the eighth one is standing differently). We do have similar depictions on Harappan tablets. We have the seven Goddesses usually also accompanied by an eighth deity in many depictions. Do many of our living religious themes have their origins here? 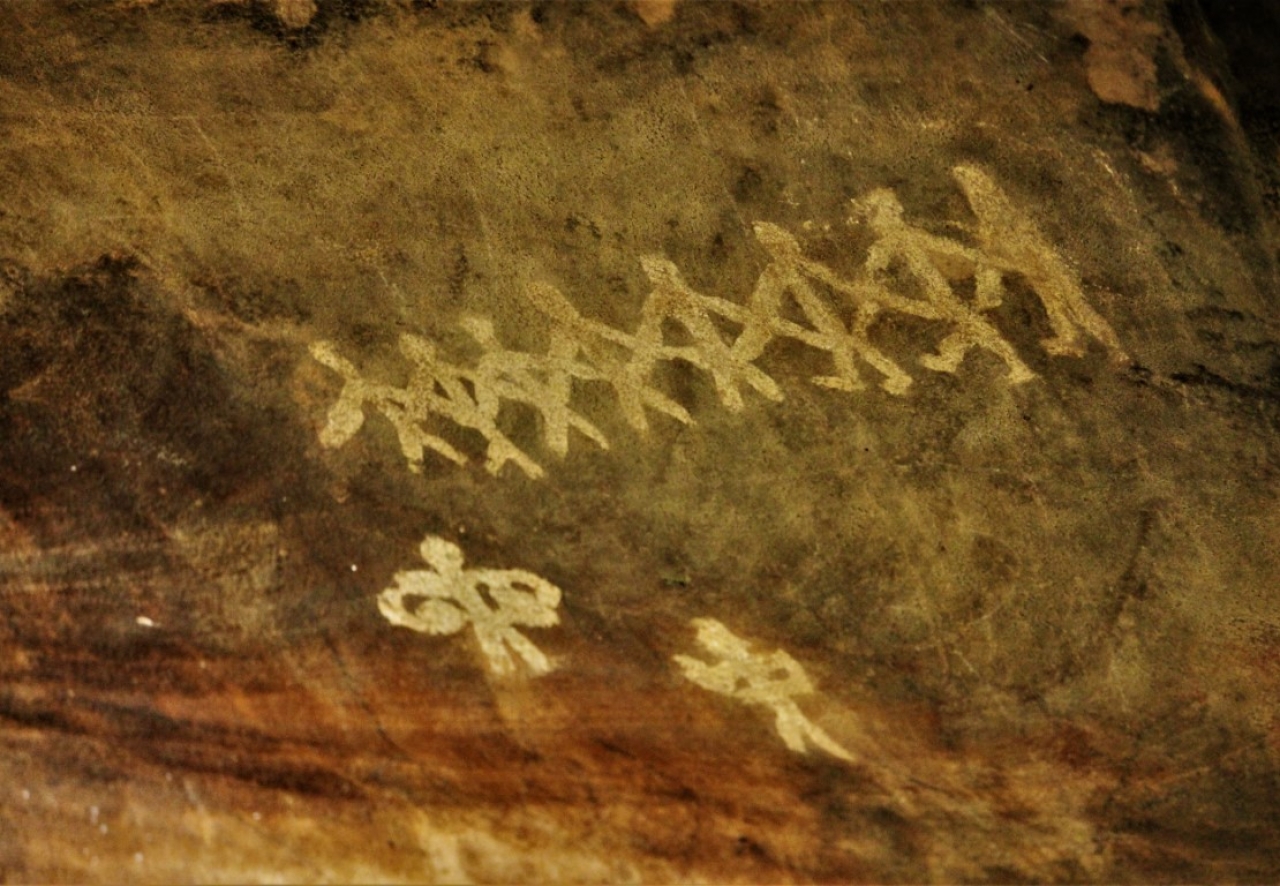 The people who made these rock paintings: were they an isolated group who nevertheless observed other human communities evolve and adopt new technologies?

Were they recording them and their own interaction with these other communities here? Were they the peripheral observers of a flow of history spanning eight thousand years or more? 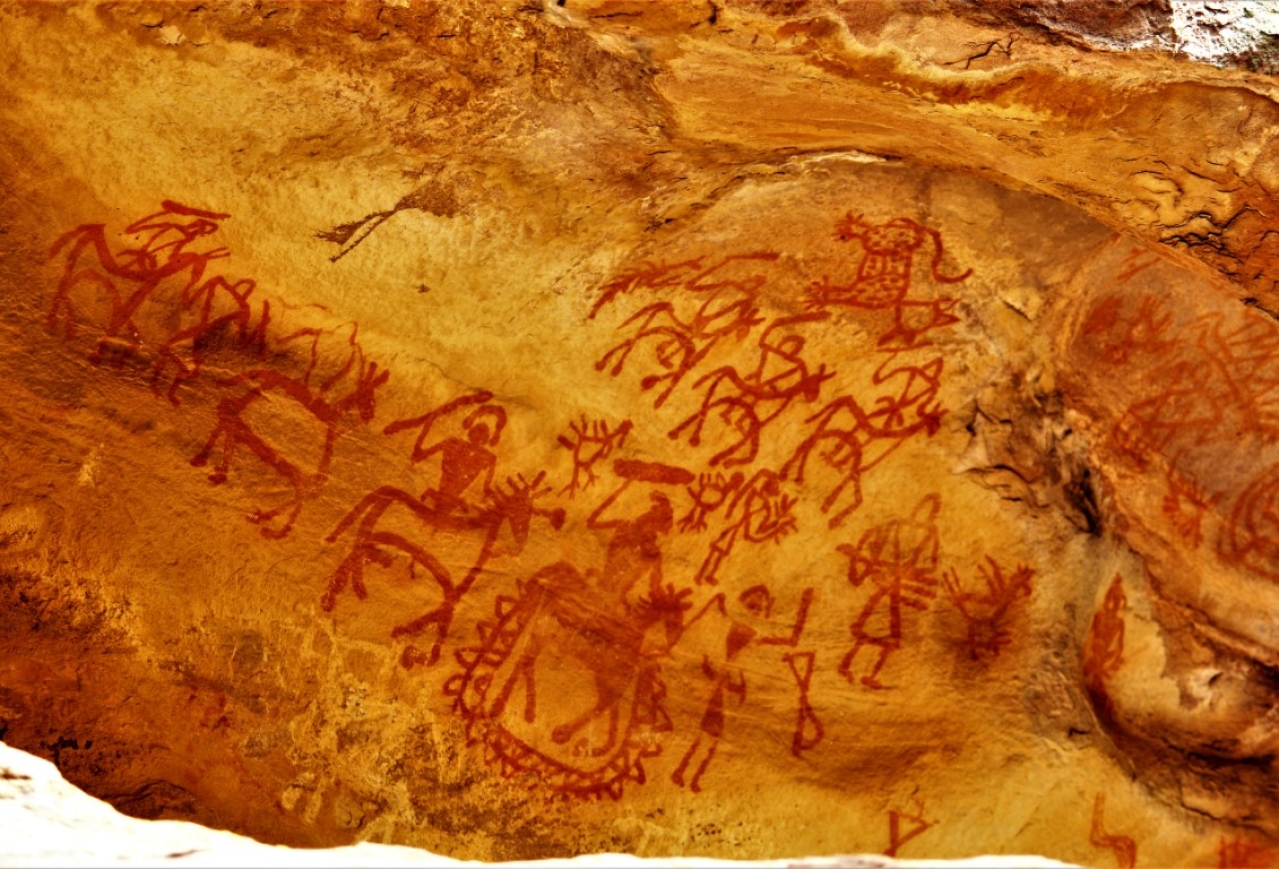 Depictions of community life in the Bhimbekta Caves.

Look at the horse paintings – both in red pigments and white. What do we make of it? 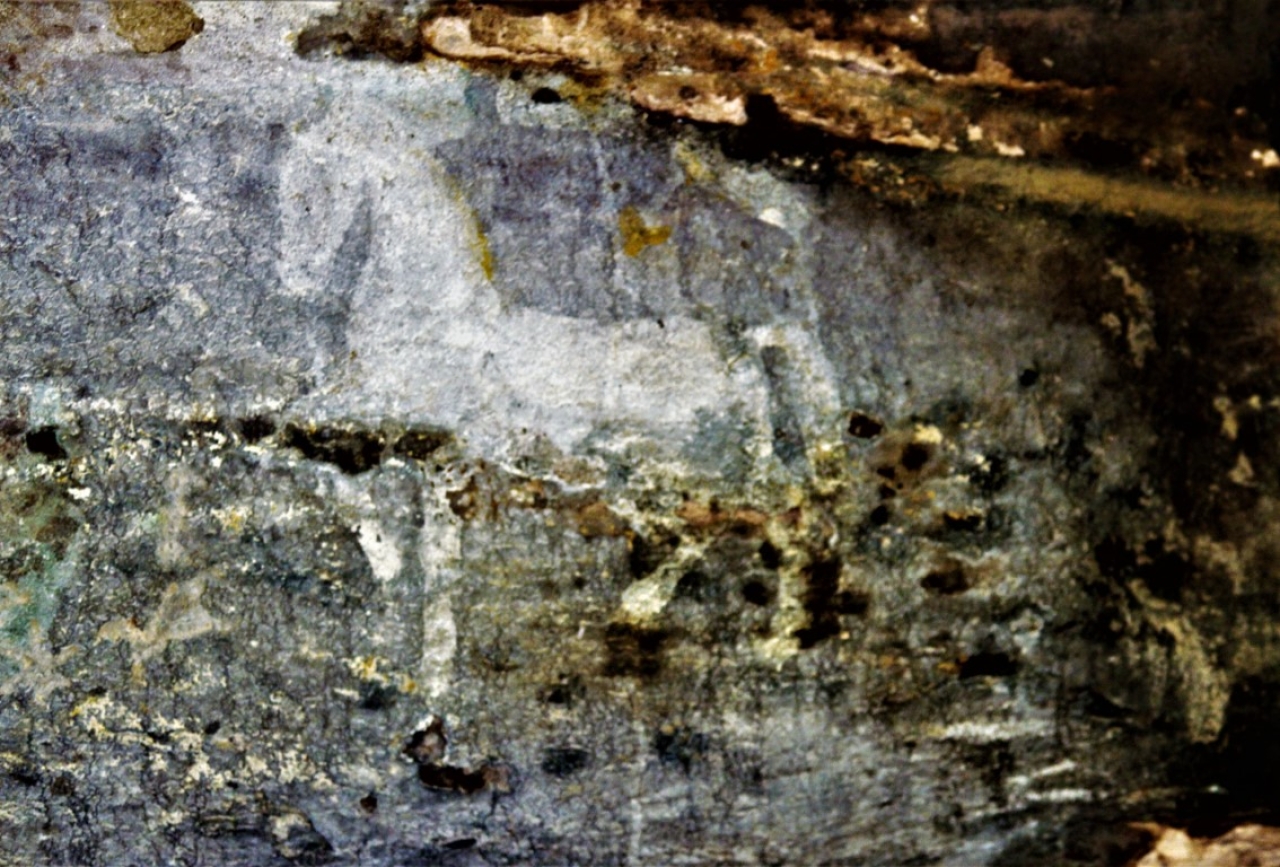 A splendid depiction of a horse using white pigment.

Enchanted by what he is seeing, Jones says we should visit this place early in the morning tomorrow. They open at 7:00 am. So expect a more detailed report tomorrow.

But before we sign off, here’s a small thought: it would be really nice if, apart from the excellent accessibility paths, some books and memorabilia were made available here. At least, I think it is really a shame that a book with a collection of the paintings of Bhimbetka is not being sold here.

Now, as we enter the birth centenary year of the discoverer of these magnificent caves, Dr Wakankar, the best tribute that we can pay him is to publish a definitive volume on the Bhimbetka paintings and make it available for sale to every person interested in the rock art of Bhimbetka.

Get Swarajya in your inbox everyday. Subscribe here.
Tags:
51 Shares