Reinstating Bengaluru’s Heritage, One Inscription Stone At A Time 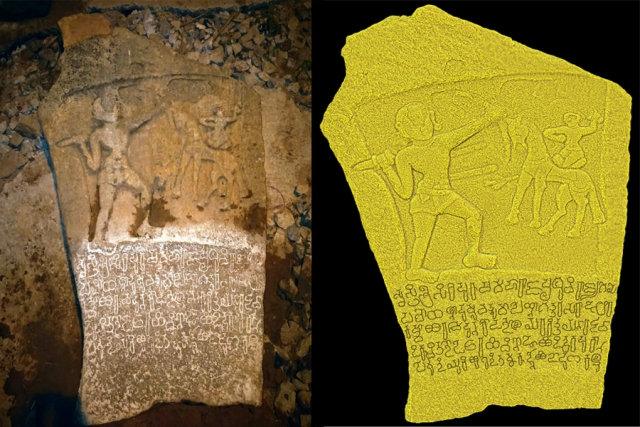 Even a decade seems like a distant past as rapid and often rampant and ruthless urbanisation has wiped off many a facet of this city. Be it its gardens, its lakes or its social fabric. And in the recent past, a bunch of Bengalureans have discovered that in this hyper-rapid rush towards development, we have also been burying our glorious past ruthlessly.

And this is a past literally etched in stone. Most of us (who care to do) only know of the history of Bengaluru from the time of ‘Naadaprabhu Kempe Gowda’ (the metro station name does ring a bell, right?). But this city has a history that goes way beyond it. And its records are all out there on the streets for anyone and everyone to discover and decipher — the much-forgotten inscription stones of Bengaluru.

Those who watched the recent Kannada blockbuster KGF would have heard of ‘veeragallus’ or ‘hero stones’, the key peg to the entire tale. The movie tells the tale of the man immortalised in stone for his heroic act of battling the gold mafia at Kolar.

And the discovery of one such hero stone in Hebbal, a suburb of the city, has led to discovering not just the tale of the ‘earliest known named resident of’ silicon city Kittayya, but also accords the locality the status of being the oldest in the city. While the film tells the tale of the 70s the veeragallu that was found in Hebbal contains inscriptions that date it back to the Ganga period — 750 AD.

And this veeragallu was, along with a few others, in a roadside ditch and would have been probably silently tuned into pavement stones or powdered granite like their many predecessors. But for the tiny groups of heritage enthusiasts in the city who have now taken it upon themselves to reinstate these bearers of the history of this city that has given them all they have.

What Is An Inscription Stone?

In simplest terms, it is a documentation of history in stone. Contrast it to the times where we let most of our history be forgotten for lack of ‘documentation or records’ these are evidence of an era, where people etched history in stone. These stones are written records of local culture, tales, lakes, taxes, donations, events, heroic acts, grants given, governance, ordinances etc. Most stones though often carry a pictorial representation of the records and text that explains it.

Over 150 inscriptions were found in Bengaluru that recorded various aspects of life and living of those that inhabited various parts of this city. But in less than 150 years, we have managed to lose over 100 of them. B L Rice in his Epigraphia Carnatica had documented all of them between 1894 and 1905, recording the original inscriptions, transcribing, transliterating and translating all of them. It was this book and the inquisitiveness to see if these were still around that led Udaya Kumar P L, a techie working in the city, to go on a stone trail, only to discover that there were hardly 30 of them left.

The saddest part of the tale is that not just are these indispensable records of the past unknown and lying around the town mostly as nameless stones, but that many of them have been broken down during construction of roads or buildings in the vicinity, some buried into debris or most ostracised and thereby worshipped for “reading the text on them is said to bring misfortune”. It is sad to say that those found in drains have at least survived, while those in certain temples were removed and buried under the deity during renovation tasks.

One such abandoned set of stones that were discovered by another group of heritage enthusiasts, the Revival Heritage Hub (RHH), led by Rajeev Nrupathunga is what has now given the city its oldest inscription, which is also the oldest existing Kannada writing. It predates the Kavirajamarga, which is the earliest available literary work in Kannada.

The man on the inscription stone is Kittayya, who can now be called earliest known named citizen of Bengaluru. This brave man whose tale has been etched on stone, rested in a ditch in Hebbal. A resident of Hebbal, Dilip Kshatriya contacted the RHH and requested them to move the ‘puja stones’ that he accidentally happened to find, for else they were sure to get destroyed during the road repair works. It was only when the team dug out the stones that they discovered that one of the four stones was a hero stone, which also had five lines of inscription on them.

This is where the group of heritage enthusiasts joined hands to form a group called the Inscription Stones of Bangalore and began the task of hunting for the remaining stones that were scattered all over the city. The core team is a group of around 10 people that has retired teacher and researcher Prof Narasimhan, an aerospace engineer Vinay Kumar, epigraphist P V Krishnamurthy, researcher by passion and BMTC Bengaluru darshan bus driver Dhanpal, architect Yashaswini Sharma, techies Udaya Kumar and Kevin Alex, photographer Pee Vee Venkatesan, history professor Rajeev Nrupathunga, filmmaker Prashant Vepuri and Devraj S, a teacher, all held together by the passion to do their bit for this city they call their own.

These inscriptions are dated back to the eighth century and later, and offer a view into the language, the culture, the social and political life of the times in which they had been installed. Most veeragallus are depictions of the heroics of local leaders, who fought cattle thieves, or of grants and donations given.

Epigraphist P V Krishnamurthy identified the inscription on the Hebbal stone as belonging to the times of the Ganga King Sripurusha. To enable further reading, the inscription was digitally scanned to facilitate complete interpretation.

Yelahanka, Begur, and Hessarghatta figure in the most number of inscriptions as the first two were rajyas and Hessarghata a seeme. pic.twitter.com/lOChb0xocf

The group then went on to map all the stones on Google Maps thereby creating a virtual map of all the stones documented by B L Rice. The map not just provides directions that can enable any user to make his way right in front of the stones, but also has the details as documented by Rice. All the missing ones too have been mapped and marked using icons that indicate they no longer exist. The stones that are found have been classified depending on their state of existence and those that are ‘critically endangered’ may be moved to museums or safer spots.

Apathy, Unawareness And Lack Of Pride

The group has been actively promoting the effort on social media too apart from holding exhibitions, presentations at schools and colleges. But in their own words, those who have really come forward to do their bit for the city and these mementos of its glorious past are not those who have made a fortune out of this city but mainly those who are generally trying to make ends meet.

Like at Chikkabettahalli, where lay a 15th-century inscription stone that was covered in garbage, liquor bottles, that had a motley group playing cards. When Kumar urged a member of the group to read the inscription he refused saying the ‘stones shouldn’t be read’. When Kumar read it out to him and showed him that it mentioned the name of his village and asked them if it felt right to be using such a place for drinking and throwing garbage.

“By that time an old man who had been overhearing us, walked away and came back with around 50 people, two auto rickshaws, one tempo and a pick axe, and in 15 minutes they cleaned up the place thoroughly. And said ‘we had no clue what it meant,’ but now we do,” explains Kumar with a smile, recollecting the experience.

In another instance, it was a plumber, who has been taking on the mantle of informing people about the inscription stones out of plain pride that he belongs to the place that has a mention in history. One of the youngsters who had gathered at Chikkabettahalli even rushed to Kumar and asked him to repeat all that he had said as he wished ‘to go live on Facebook and share this new found knowledge to all his friends’.

But that pride isn’t reflected in those whom this city is actually giving its best to. Rarely have the ‘educated’ or those at intellectual fests turned up to lend an ear to these forgotten files of time.

The significance of the Hebbal inscription stone inspired the group to have it placed in a decorated mantapa on a pedestal in the same locality. Architect Yashaswini Sharma has contributed to the efforts by designing a Ganga-style stone mantapa that will house the inscription stone. The total cost of the mantapa is estimated at around Rs 20 lakh and a crowdfunding initiative has been launched by the group to ensure those that call this city their home can pitch in to house its oldest testament of time.

They have stayed away consciously from seeking support of local leaders and politicians, as they seek not to have any contributions with vested interest. The group instead created a 1/8th scale brass replica of the stone inscription and everyone who contributes to the effort can proudly display that symbol of history in their living rooms.

How does modern technology like 3D scanning & 3D printing help in preserving our valuable heritage? Take a look at how replicas of inscription stones are made!

As I walked into the by-lanes of Dasarahalli with Kumar to meet yet another pair of inscription stones that lie between two houses, it felt unreal for here was historic documentation that could easily be dismissed as just part of some construction debris. Holding the replica of the 1,250-year-old Hebbal inscription stone in my hands though was some consolation, for it instills a sense of pride and a slight reduction of guilt about what we have made of this city.

But so far it has only been the simple plumber, a housewife, a teacher and the common middle-class citizen, who is definitely not that part of silicon city that is seated in plush rooms thanks to the city, who has taken pride to hold a replica of the oldest written record of any language in Bengaluru.

And it is not those earning six-seven digit salaries in this city that have cared to contribute, but the humble plumber, bus driver, auto driver and the like who take pride that there is a piece of history that talks of the part of the city to which 'they belong' who are taking the baton from Kumar and doing what they can.

You too can contribute to protecting Bengaluru’s heritage by getting home a replica of the inscription stone. For the past is a treasure trove that is to be passed on securely to the next generation, lest we forget we had one.