Seven Thousand Wonders Of India: The Magnificence Of Virupaksha Temple At Pattadakkal 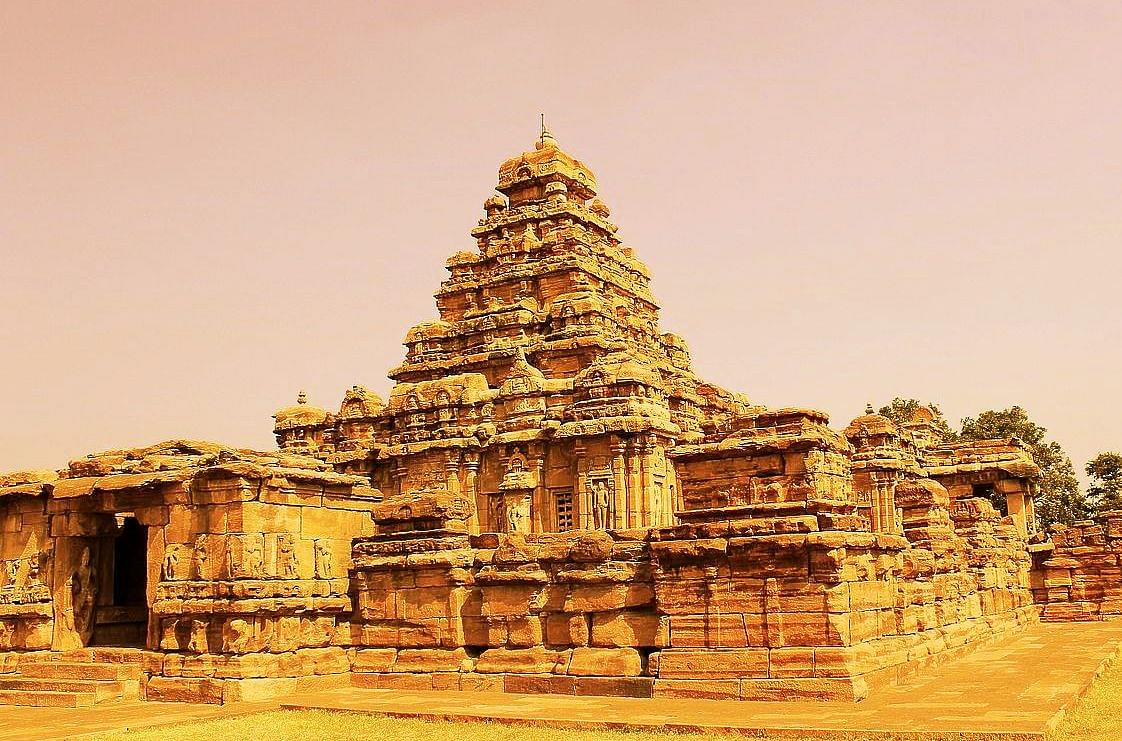 Pattadakkal was the second capital of the Chalukyas, after Badami.

Established on the Malaprabha river bank, it is named after the royal coronation ceremony (patta-bandha maha-utsava). Today, it seems a small village exclusively devoted to temples.

The Chalukya dynasty established several kingdoms — in Vengi (Andhra), Kalyani (southern Maharashtra), Gujarat (Lata and Patan). Though they ruled over large regions for seven centuries, the later Hoysalas and Vijayanagara dynasties are more famous — except among art historians.

Like the Pallavas’ Mahabalipuram, Pattadakal experienced only a single century of temple constructions — but what astounding temples!

When Chalukya king Vikramaditya returned from his victory over the Pallavas in Kanchipuram, his two queens, sisters Lokamahadevi and Trailokyamahadevi, built twin temples.

Vikramaditya followed his father Vijayaditya and grandfather Vinayaditya, who had built Nagari temples in Pattadakkal.

So it is a unique site, with a magnificent mix of both architectures. And the grandest of these temples is Lokamahadevishvaram. It has several remarkable similarities with Rajasimha Pallaveshvaram of Kanchi, such as:

In almost all these features, Mallikarjuna temple imitates Virupaksha, but it is smaller.

But there are also stark differences, showcasing the imagination and licence of its architects, like:

The sanctum itself has a cylindrical Shiva Lingam. There is a beautiful large decorative concentric lotus on the ceiling over the lingam. The inner walls are not plain, they are covered with pilasters and a sculpted garland runs around the walls above these pilasters.

The sandhaara passage is lit by daylight streaming through the strategically positioned jaalis. The three exterior walls of the sanctum have empty koshtas with elaborate makara-toranas above them; the general outline seems inspired by Pallava toranas; seeing riders on the makaras, one wonders if these in turn inspired early Chola toranas, two centuries later.

There is a separate sanctum for Durga as MahishasuraMardhini.

Even among the breathtaking variety of Chalukya MahishasuraMardhini sculptures, in Aihole, Badami and Pattadakkal, this one stands out for its dynamism and conception.

One would suspect that there are two sculptures fused together, but a closer look shows there is only one. An anthropomorphic Mahisha rises out of a reclining buffalo, arching backwards as two of Devi’s weapons pierce him.

One leg on the ground, her other leg planted nonchalantly but forcefully on his head, Durga arches in the other direction; her eight arms, each carrying a different weapon, are starkly distinguished — which is harder to depict in relief (chitraardham).

Her bow serves to frame the two warriors, balancing both, while mirroring their curvature. Her expression is inscrutable; the contrast to the utter ferocity of the action is stunning. It is one of the finest sculptures in Indian history.

Unlike Rajasimha Pallava, Vikramadaitya seems not to have composed any poems or inscribed his titles on either temple.

That the two temples are built by his queens, is itself an interesting contrast.

But an inscription in the Virupaksha temple mentions Achalan, an exponent in Bharatamuni’s Natya Shastra. As we have already seen from his decision not to destroy the Kailasanatha temple of Kanchi, Vikramaditya was a great rasika himself.

Perhaps, Achalan also influenced him as much as the Pallava sculptures in Kailasanatha, because the Virupaksha temple, too, is studded with Siva as Nataraja, not only in some of the koshtam sculptures, but also in a few of the small sculptures in nasis.

Siva in UrdhvaJaanu, with one knee raised high, dancing upon apasmara purusha, while a gana plays a ghatam to keep the rhythm is one of the complete dance sculptures.

Above him vidyadharas hover offering garlands as obeisance — this particular segment is quite similar to the Amaravati sculpture of the Ascent of the Buddha’s begging bowl.

There is a rishabha dhvaja — flag post, with a bull seated on top, next to Siva. One wonders if this is a subtle dig at Rajasimha Pallava, who called himself Rishabadhvaja.

Another sculpture of Siva dancing on apasmara, with a trishula beside him, and one arm across his chest, reminds us of the Ananda Tandava of Nataraja made very famous by Chola bronzes.

But in this sculpture, the left leg is broken at the knee, so we can only guess; perhaps it is Chatura Tandava, more common outside Tamil Nadu.

Another shows Siva in atibhanga — his face towards us, but twisting around as we see his back, one leg folded. Usually only Gajasamhara Murthy flexes so much, depicting extraordinary dexterity; but here, no elephant is shown, so it may be a different theme.

An almost equal flex is shown by Ravana in a scene where he battles the vulture, Jatayu. A shield in one hand, a sword in the other, Ravana twists around facing backwards, at Jatayu, attacking him. The expression on his face is priceless.

There is a smaller sculpture above this of Ravana flying with Sita in a wheeled chariot, pulled by a horse. So two moments are caught in the same frame; a simple but elegant narrative technique.

A sculpture of Harihara, trishula and Nandi on the right side representing Siva, shankha and Garuda on the left side representing Vishnu, is unique. The dvarapalakas, too, are depicted with great vigour, standing in different poses, each leaning on his gada, with a snake coiled around it.

The yajnopavita, arm bands, and jata makuta of each dvarapaalaka is very delicately and ornately done, a feature one mostly associates with Hoysala sculptures.

Bracket figures and mithunas, and other unusual sculptures like Padmanidhi, mark Virupaksha as distinctly Chalukya in style.

Besides the nrtta murtis, the toranas, especially the makara toranas, and the very remarkable Dravida shadvarga features, some of the sculptures too remind us of Kanchi Kailasanatha.

The sandhya tandava sculpture, rarely seen even in other Pallava monuments, is one example.

A scene where Ravana seems to be singing to Siva is another. There is another figure in a chariot in the lower half; not clear who, but stylistically similar to a Pallava Tripurantaka sculpture.

A puzzle is that this Siva carries a chakra in his left hand, and is not seated under a banyan; could it be Chakradaana?

A Trivikrama sculpture features Mahabali offering water from a kamandalu to Vamana, which is common across many temples in India. But to the right is Garuda punching Mahabali when he first tries to escape — a scene depicted only in Kanchi.

These are strong indicators of the Pallava influence on this temple; surely there was inspiration, not merely imitation.

But some outstanding sculptures set apart Virupaksha even among Chalukya temples, even in Pattadakkal. The Nandi mandapam has wonderful sculptures of several mithuna couples. Below them are beautiful patterns of intricate fractal designs; of hamsas, flowers, creepers, jalasha purushas etc.

One remarkable depiction is of Ravana lifting Kailasa, which we will also see in Ellora. He is shown huge, with all his arms and heads, lifting the mountain, as Uma clings to Siva, and ganas and others react with alarm.

One gana aiming an arrow is the element of humour, which one has to look keenly to spot.

As remarkable as the large sculptures on the outside are the miniature panels on the pillars in the sabha mandapa. There are far too many pillars, each carrying miniatures on four sides, to even list in an essay.

The battle scene of Virata Parva in Mahabharata, when Kauravas stole the cows of Virata, provoking Arjuna to act as charioteer to their prince Uttarakumara, is one such.

Another panel shows Hanuman in Lanka, battling and defeating its guardian rakshasi Lankini, then in Asokavana, seeking Sita, seated under a tree. Bhagiratha prayatna, showing his one legged penance, on two different occasions, also features rishi Jahnu allowing Ganga to escape from his ear, after he swallowed her in anger for invading his ashrama.

Chalukyas surpassed all other patrons in recognising and honouring sthapathis and shilpis. Several sculptures are autographed, by their sculptors. These are all Kannada, in the old Kannada script.

This is remarkable because the era of Kannada literature truly begins a century later in the Rashtrakuta court. In one of the mukhamandapas, there is a sculpture of Surya on the ceiling (called melgandu), and on the wall an inscription mentioning the sculptor — Sri Padadevaputra.

The name Gundan Anavarita Achari is inscribed on a pillar in the eastern mahadvaara, below the inscription of Vikramaditya and Lokamahadevi. An inscription in the nandi mandapa “Sri Sarvasiddhi aacharya takaNo dishaya sutradhaari” suggests an architect (sutradhaari) from the southern country (takaNo dishaya) — perhaps Kanchipuram?

There is also a trishula-stambha, which was built later, by Kirtivarman II, which mentions the names of these two and other temples. The trishula which should have topped it, is missing, only the pillar remains.