The Mysore Connection In Kashi: How A Maharaja From The South Made A Mark In The City Of Civilisation 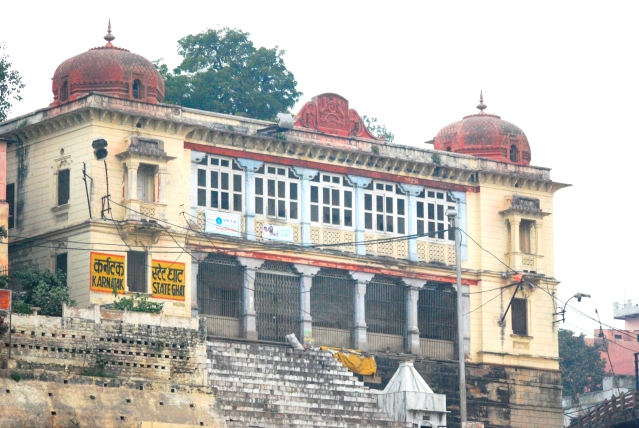 The city of Kashi, also known as Varanasi as the city is bound by Varuna and Asi rivers and Banaras alternately, is revered by Hindus as the most sacred of all spiritual places.

The kingdom of Kashi with Varanasi as capital finds mention in the Mahajanapadas and Jataka tales. Gautama Buddha is said to have started preaching Buddhism here first.

The river Ganga which flows peacefully here bears witness to the entire life cycle between life and beyond. The city is also known as a centre of learning and intellectual discourse.

Nalvadi Krishna Raja Wadiyar visited Kashi as many as 16 times during his lifetime. Prof. C. K. Venkataramaiah in his book, Aalida Mahaswamigalu, has related that Nalvadi was accustomed to inscribing shlokas (hymns) in his letters to his Sanskrit teacher on his birthday.

As early as in 1915, a portion of Hanuman Ghat was purchased by Nalvadi, and named as Mysore Ghat after his kingdom. It now bears the name Karnataka Ghat.

Adjacent to the Ghat, Nalvadi had the Mysore State Chhatra or Dharmashala built for the convenience of pilgrims from Mysore (Karnataka).

The name, Karnataka Ghat, was on display on the river-side wall of the Chhatra until recently and has now most unfortunately been painted over during restoration work by the Muzrai department of Karnataka.

Hope the administration corrects this in the coming days.

There is an interesting story behind the purchase of this land. Nalvadi was wont to meditate, after his ablutions in the river, from dawn to dusk in a stone mantapa along the Hanuman Ghat.

It so happened that one day, he was impeded from standing up as his head touched the roof of the mantapa.

Taking this as a sign, he wrote a letter to Kashi Maharaja Bahadur Sir Prabhu Narayan Singh seeking permission to improve the mantapa.

The Kashi Naresh in turn offered to transfer the mantapa and the land around it to the Maharaja of Mysore.

This delighted Nalvadi, as Mysore could finally have a Ghat named after the kingdom since the then existing Chhatra of Mysore Maharaja was located at a distance from the riverbank and in a corner of the city.

But when he sent in an enquiry regarding sale deed of the place, the Kashi Naresh responded that he was transferring this for free as he considered it a blessing to be able to do so for a king as noble as Nalvadi.

However, Nalvadi insisted on a payment as it was against his principles as a Kshatriya to take possession of a land parcel in another kingdom for free.

This led to the purchase of the land from the Kashi Naresh by the Mysore Maharaja for a sum of Rs 30,000 following communication about the matter which lasted for a duration of about six months. The extent of the Chhatra and Ghat is about 0.29 hectare.

Viewed from the river side, the Mysore (Karnataka) Chhatra is a two-storeyed stately building of cream coloured walls with octagonal pink domes, which take after the Kuta domes of South Indian style of temple architecture, flanking the Coat of Arms of erstwhile Mysore Kingdom in the centre.

The projecting bay windows offer views across the river. The entrance from the town is from the side alleyway that leads down to the Karnataka Ghat. The entrance door opening is topped by a fluted arch with a kalasha moulding.

Atop this is a signboard that displays the name ‘Mysore State’ in English, Hindi and Kannada languages. Internal and external walls of the Chhatra have small circular openings with grill work serving as ventilators above the windows and doors.

The chejjas and roof overhangs are supported by eave supports in lime mortar. The Chhatra is built around a central courtyard resembling the layout of thotti mane (courtyard house) typology of Mysore.

The pillars are simple block columns with capital, base and a long shaft in between with corner chamfering. A decorative grill balustrade runs between the pillars barring the portion of the steps that lead to the colonnade around the courtyard.

At the entrance, there is a small shrine topped by a simple Shekhari vimana of the Nagara (North Indian) style of temple architecture.

The garbhagriha (sanctum sanctorum) houses numerous Shiva lingas. The entrance is through a flat roofed ardhamandapa (porch). The pillars and ornamental arched moulding over the door opening flanking the entrance are highly decorative.

The Muzrai department of Karnataka which governs the Chhatra mulled privatising it a few years ago as there weren’t many people who were eager to manage the Chhatra, but this idea was fortunately abandoned according to the present manager, S. M. Venkatesh Murthy, once he was appointed.

He informs that the access to the Ghats through the lower floor which Nalvadi used has been retained.

There is a small niche along the bank that houses dilapidated images of Sati and Ruru Bhairava who is one of the eight guards of the sacred city of Kashi.

The latter was replaced about a decade ago.

Nalvadi Krishna Raja Wadiyar’s association with Kashi was not limited to spiritual pursuit alone. He was the First Chancellor of the Banaras Hindu University (BHU) which traces its origins to the establishment of the Central Hindu College (now Central Hindu School) at Kamachha by Annie Besant in 1898 CE.

The school was the venue for the under-graduate courses started by Pandit Madan Mohan Malaviya in 1916 CE as the BHU campus was still under construction.

It is now under the administration of BHU. BHU was the first private university that was established through an Act of Government of (British) India in 1915 CE during the Viceroyalty of Lord Hardinge.

Sir Harcourt Butler who was the Educational Member of the Government at that time was supportive of this endeavour.

Nalvadi’s Chancellorship of BHU began from 1916 and he was probably the Chancellor until Maharaja Sayyaji Rao Gaekwad of Baroda took over in 1925 CE.

He presided over its first convocation that was held in the Kamachha buildings on 17 January 1919.

The prayer hall of the building along with terraced platform covered by a Shamiana (marquee) for the occasion was the venue.

This building was earlier known as B.E.N.C.O (Banaras Engineering College) Workshop building; it is now home to IIT-BHU.

These facts were brought to light as a result of my discussions with Dr. V. K. Mishra, Deputy Librarian, Sayyaji Rao Gaekwad Library, BHU when I visited Kashi in late October.

While the speeches of Nalvadi as Chancellor of BHU are well recorded, the venue of the First Convocation and the duration of his Chancellorship were unclear, and Dr. Mishra was kind enough to investigate these queries and respond within a short period.

Nalvadi was conferred an honorary doctorate by BHU on 28 December 1937 CE, the only one he received during his lifetime.

It is not surprising that the BHU invited Maharaja Nalvadi Krishna Raja Wadiyar of Mysore to be its first chancellor considering that his scholarship in various disciplines and model administration was well known.

Incidentally, during this time, he was also the Chancellor of University of Mysore which was the first independent university to be founded in an Indian princely state on 27 July 1916 CE.

Addressing the first convocation, Nalvadi acknowledged the patronage of the Maharajas of Kashi, Darbhanga, Jodhpur, Gwalior, Bikaner and Kashmir to the cause of BHU.

At that time, the First World War had just concluded, and it is evident that this hung heavy on his mind as he elaborates on the purpose of the university to hone enlightened minds.

He says, “… as the recent war has shown us, it does not necessarily follow that every increase of knowledge is accompanied by a betterment of conduct.

Still, the doctrine that knowledge is one that our Vedanta gives support when it attributes sin and downfall to Avidya or ignorance and sees in Vidya or enlightenment the liberation and perfection of the soul.

Therefore, centres of culture like this university have a noble purpose to serve and can contribute materially to the enlargement of the human ideals and to the promotion of interracial and international fellowship.

But they can achieve this end only if their outlook is as wide as humanity itself.”

The first convocation was not only attended by academics and elite citizens of Kashi, and representatives of rulers of princely states, but also graced by the presence of the Shankaracharya of Dwarka.

Two more of his speeches as Chancellor of BHU are recorded on 13 and 14 December, 1921 CE.

The first is during the conferring of honorary Doctor of Laws on the visiting Prince of Wales, HRH Edward VIII, and the second during the convocation of 1921.

The Prince of Wales inaugurated the university buildings during his visit to BHU. In all his addresses, Nalvadi’s concern for the uplift of society shines through.

While he exhorts learning from the philosophy, substance, ideals and knowledge of the Sanatana Dharma, and recovering lost intellectual treasures of the past, he equally emphasises the need to study modern sciences and to develop a broad world vision for a vibrant India.

He ends his speech at the convocation of 1921 CE with the statement:

Our Hindu University cannot survive unless she contributes to the life and social order in the India of today. She must quicken what is inert, illuminate what is dark, rejuvenate what is old and withered. And even as the Eternal city, in which she has her home, is to the pious Hindu the meeting place of the earth and heaven, so must the University of Banaras stand as the bridge between old and new, and with the holy River at her side, link the India of the Vedic times with the India of the morrow that this to be.

The association of the Wadiyars of Mysore with BHU and Kashi continued through his successor, Maharaja Jayachamarajendra Wadiyar who was the Chancellor from 1960 - 1963.

During this period, he was the Governor of Mysore State in independent India. He was conferred the honorary Doctor of Laws by the university in 1942 CE.