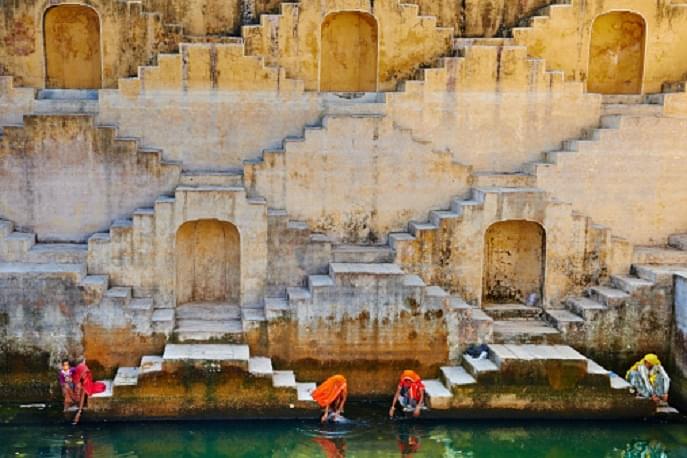 There has been much consternation from the Hon’ble Supreme Court of India about the ‘reluctance’ of states to tackle drought like situation in India. However good the intention may be, the expressions of displeasure do belie a sense of disconnect that people living in plush environments with little to worry about have from the ground realities.

A drought like situation is an annual phenomenon, and every summer there is a water shortage of ‘gigantic’ proportions. The directives to create a drought management fund are well intention-ed, but the problems of federal structure and the lack of seriousness towards the Supreme Court’s ‘encroachment on the executive domain’ can easily render any such measures ineffective.

Water shortage and drought like situations are not new to India. It is possible that even as far back as the days of the Sarasvati-Sindhu Civilization (Indus Valley), we find evidences of climate change, resulting in altered precipitation patterns, and the dying/shifting of the river Sarasvati perhaps causing a collapse in the urban orders of the cities, leading to their collapse. Ancient texts note how water was a very important contributor to civilization, by deifying water as a Deva (Varuna), our rivers as Devis (hither Ganga, Yamuna, Godavari, Cauvery) and establishing sacred pools and forests/groves that act as potential watersheds.

Dependence on monsoons, and the perennial threat of drought-like conditions were everyday facts of life for our ancestors, and written history, religious texts, as well as popular folklore speak of them in various ways, be it Rtusamhara and Meghdutam talking about the beauty of the monsoon, or the stories of the Nayanars Sambandhar and Appar chronicled in Periya Puranam and the tradition of Dvadasavarsa Panjam (Currey and Hugo (1984) delve a lot more into this).

Hardships are a way of life in fact for communities like the Bishnois of the Thar, who were taught by their Bhagvan Jambheshwar that you have to live with nature to be able to bear its vagaries. However, our ancestors chose not just to sit back and wring their hands; instead, they devised strategies to combat with these vagaries of nature.

Thus, a rich, vibrant culture of rainwater harvesting and catchment preservation and development arose, based on careful observation of nature. Entire cities like Mandu were created with the foundations being laid for water harvesting technique simultaneously. The world’s oldest masonry dam (Mettur), some of the world’s largest stepwells in Rajasthan and Gujarat, kuins, ponds, check dams, tanks (called Hauz in north India) - our history has record of endless number of structures across the length and breadth of this country, which stand testament to the scientific skills, technical ability and far-sighted thinking of our people.

These activities also received social sanction at large - It was considered a matter of punya to construct large water harvesting structures, and many rich citizens contributed generously. The Arthashastra speaks about measures to be taken by the rulers to ensure the availability of water through the year. Many such efforts and the associated traditional knowledge has been chronicled in books and other media forms by several organizations like CPR Environmental Education Centre, and activists/researchers like Anupam Mishra over time.

Of late, we have seen the scourge of water shortages hitting us repeatedly, and while it is commonplace in both rural and urban India, rural areas are now receiving as much attention. There are many reasons for it (pollution, mismanagement etc.), and one critical way to combat these problems that has been often discussed is rainwater harvesting. Several states and cities in India have passed mandates to place rainwater harvesting structures in place as well, with Bengaluru, Chennai and Delhi being examples off the top of the mind. However, actions on the ground often belie good intentions.

Rainwater harvesting structures built in many places are in disrepair and neglect. There are no checks in place to ensure the maintenance and repair of such structures in many cases. Government driven schemes often do not perform well - in the midst of all the talk, we see states like Telangana going for massive projects like Mission Kakatiya to revive a network of tanks and reservoirs across the state. In general, we observe three key themes about water conservation in India:

While a fund as suggested by the Supreme Court is well intended, schematics of such a fund would lead to much hair splitting. A ladder approach towards water management would be more suitable towards the creation of new assets of water harvesting and repairing the existing ones in use. This ladder, addressing the various levels of governance, can be easily integrated into an existing program like Mahatma Gandhi National Rural Employment Guarantee Scheme (MNREGS), and also involve technical experts at each spoke of the ladder.

This fits well into the government’s stated objectives of using MNREGS for creating more productive assets, which the Hon’ble Finance Minister of India had also stated in 2014 on the floor of the Parliament. Another source of fund is the State Chief Minister Relief Fund; however, given the multiple priorities associated with it and the controversies that can be attached to it, a corpus investment fund can instead be set up. This fund can have multiple funders involved in various shares, and can be allowed to take money handed over as donations.

A certain percentage can be chipped in by the Gram Panchayat from its development funds, thus sharing the responsibility. Management of the fund can be done within the MNREGS structure so as to avoid further bureaucracy. Of course, this is just one idea - there can be many more exciting models that can be adopted successfully. This exercise can also be replicated within the cities using the public participation model of the Ward Sabha that was envisaged under the Jawaharlal Nehru National Urban Renewal Mission (JnNURM).

While the creation and management of assets is one aspect, there is another aspect that should be discussed much more - the revival of existing historical structures. This activity should be made a priority for not just political reasons or sentiments. There is a major movement across the world to reclaim water bodies for the community, as was a major role of theirs in human history. It is known that redevelopment of water structures can also act as a catalyst in enhancing community interaction and also spur local level economies, much on the lines of global efforts to revive rivers (Korea, Japan) in various ways (tourism, water availability, new jobs).

With the government of India and various states and cities also paying attention to the revival of riverfronts in India, it is but prudent to even actively consider the revival of historical water harvesting structures. After all, we tend to forget that such structures were not just reservoirs of water but also places of community gathering in India. Many village meetings still happen next to the water stepwell/reservoir, which would also be attached to the local village temple. Such structures also host major festival celebrations, and are a major scene of community engagement and economic activity.

Just imagine having bhajan mahotsavs in the midst of the cool breeze in a bavri or an art festival next to a hauz. We have a unique heritage that is being neglected, and can also help us solve water shortage problems in several areas if revived and managed properly. It can also act as a symbol of the glorious water harvesting tradition that India possesses, working as a psychological boost necessary to push otherwise reticent people who have no other reason for the adoption of rainwater harvesting in their daily lives. However, care has to be taken that it does not get reduced to mere stunts.

Drought and water conservation have always been a way of life in India. India needs to revive its water harvesting and conservation knowledge into action that is actively supported by the government than just mere tax incentives not just because we can create a more prosperous nation, but because water is life. Hopefully, people in administration will be wise enough to grab the low hanging fruits.