Agro-forestry Along River Banks: How Exactly Do Trees Help? 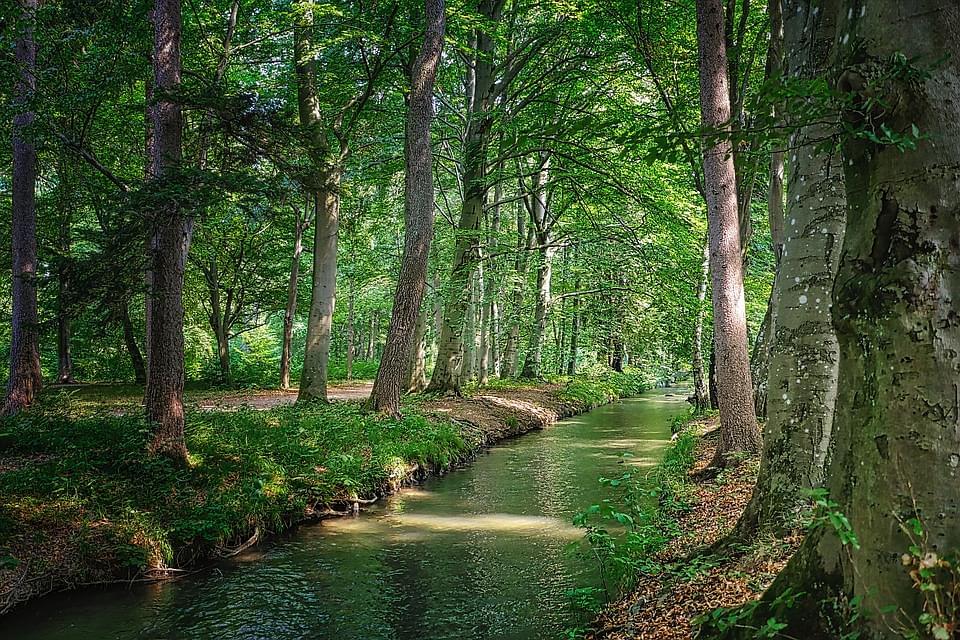 Developing tree cover in the runoff region and floodplain area of rivers is a very simple and effective solution to ensure prolonged surface and subsurface flows and enhance overall water supply. Tree root canopy enhances the percolation of water from condensation into the soil.

This leads to increased quantum of water in groundwater aquifers that feed rivers. The water thus replenished in the aquifer flows into the rivers in a consistent manner over a long period, drop by drop through the groundwater-surface-water interaction.

How can a tree increase the infiltration rate?

Living and decaying roots create a network of well-connected channels in the soil called macro-pores. Water flow through these macro-pores can be up to several hundred times faster than the flow through the soil matrix. Also, organic matter from leaf litter and tree roots improves soil structure, which can increase infiltration rates.

Where does the water in a river come from when it has not rained recently?

Baseflow and streamflow are the technical names for flow in a stream or river. River baseflow results from groundwater seeping into riverbanks or the riverbed. Baseflow is the sole or primary source of streamflow during the annual dry season when rainfall is insufficient to generate substantive runoff.

The surface water is almost always connected to groundwater, which has a critical impact on river water flow. In general, the baseflow can be significant enough to allow the stream to flow around the year. Recharge from groundwater through baseflow is the major source of sustained flow in the river, except during storms.

Not only will the overall quantum of river water stabilize by afforestation but the quality of water will also improve. This is because the major source of pollutant in our rivers is the agrochemicals used in agriculture. Having a green cover will ensure that the rhizosphere (root system) of the tree filters out these agrochemicals from the soil and the runoff water before it seeps into the river itself.

But trees don’t just help with source augmentation — they, in fact, have a significant impact on stabilizing precipitation patterns through evapotranspiration — a process by which water is transferred from land to the atmosphere by evaporation and transpiration. Evapotranspiration seeds passing rain clouds, making it rain in and around the tree cover itself. This adds to the flow of the river too.

The effect of trees on the river banks is described in the following scientific way by Bill Mollison in Trees and their Energy Transactions: “A point which is often overlooked is the effect of trees in increasing total precipitation considerably beyond what is recorded by rain gauges.

“The intermittent presence of trees that grow up to a height of 40 feet in forest land and private lands with the wind blowing across these lands create the Ekman spirals thereby causing repeated rainfall in the local region. “

India gets its rain from monsoon rainfall, just like many other South Asian countries. These rains have seasonally changing patterns, unlike convection rains. With various hill ranges, some regions fall on the leeward side or the rain-shadow regions of the mountain ranges.

In the rain-shadow regions, the forest’s ability to cause inland rain by seeding water-laden clouds becomes very critical, especially during the drought years.

Trees attract water-laden clouds to precipitate. As forests disappear, precipitation will also reduce in the area, in and around the river floodplains. Trees and forests contribute to the intensification of rainfall through the biological particles they release into the atmosphere, which include fungal spores, pollen, bacterial cells and biological debris.

Atmospheric moisture condenses when the air becomes sufficiently saturated with water and much more readily when suitable surfaces, provided by aerosol particles, are present.

There is another phenomenon where trees harvest water from the atmosphere. A lesser-known but significant impact of the tree cover is its condensation effect. This condensation effect created by the tree foliage also adds to a substantial amount of water harvested from the humidity of the environment.

This is part one of the Cauvery Calling series and the piece has been excerpted from the Rally for Rivers Draft Policy Recommendations document.

Praveena Sridhar is a Lead Policy Expert at Rally for Rivers, Isha Foundation, and has several years of rich and diverse experience in water and related sectors.  She has been a UNICEF consultant for a water and sanitation program and a consultant to other multilateral agencies and nonprofits.