All We Need Is Christmas Without History-Centrism 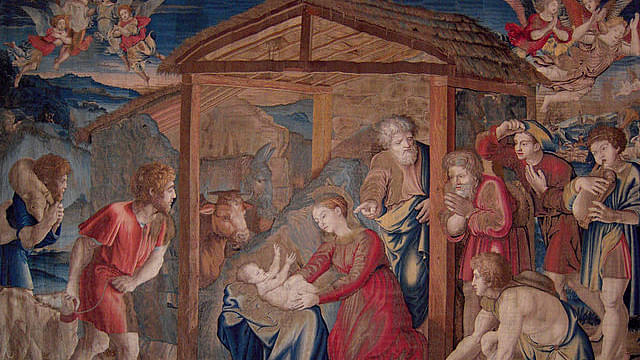 Adoration of the Shepherds (School of Raphael - Henry Townsend/Wikimedia Commons)

Every time there is Christmas, some heated arguments emerge from the newly emerging breed of internet ‘Hindutvaites’. The target of attack usually would be Sri Ramakrishna Math. How can they celebrate Christmas? Is it not shameful? Why are they behaving like secularists?

Swami Ranganathananda (1908-2005), the 13th president of the Ramakrishna Math and Mission, in his famous lecture, ‘The Christ we Adore’, delivered during the Christmas celebrations in the Math in 1954, made this point very clear:

The history of Christianity, in its twain records of persecution, violence, and war, on the one side, and lofty mysticism, moral passion, and humanitarianism on the other bears the impress of this inner division, which also explains its recurrent conflicts with science. ... The successful synthesis of thought elements, each of which is vital and powerful, flowering as they do from human experience at various levels ... calls for the guidance of a philosophy or world-view such as that of Vedanta, which is not afraid of any aspect of experience, but seeks truth in all of them with zestful detachment and devotion.

‘The Christ we Adore’, Eternal Values for a Changing Society  (Vol.II)

The problem with Christianity is its history-centrism. The obsession to inherit the Jewish spiritual tradition and then replace it with the messianic claims of Jesus has done irreparable damage to humanity when institutional Christianity of both Lutheran and Roman sects, started functioning as the tools of colonialism. The history-centred narrative and claims of Christianity are also inseparable from its virulent antisemitic and anti-pagan (and hence anti-Hindu) aspects.

Sociologist, poet, playwright William Hermanns (1895-1990) had an interaction with Albert Einstein. The sentiment Einstein expresses here is something which many Hindus and perhaps many followers of natural religions worldwide would share with empathy.

Sometimes I think it would have been better if Jesus had never lived. No name was so abused for the sake of power!

I added, “Jesus never taught anything other than what Moses and the prophets had taught.” Einstein didn’t seem to listen, for he said all of a sudden, “Look what mankind has done to itself in the name of Jesus! Look what the Christians are doing and have been doing to the Jews for nearly 2000 years.”

The gentle, mild-mannered Einstein comes out unusually harsh on Christianity in the conversation. And what is more, he correctly zeroed in on the real problem with Christianity – its obsession to make Jesus play the ‘true messiah’ in the historical linear time:

“There are cosmic laws, Dr. Hermanns. They cannot be bribed by prayers or incense. What an insult to the principles of creation. But remember, that for God a thousand years is a day. This power maneuver of the Church, these Concordats through the centuries with worldly powers ... the Church has to pay for it. We live now in a scientific age and in a psychological age. You are a sociologist, aren’t you? ... You know what the Herdenmenschen (men of herd mentality) can do when they are organized and have a leader, especially if he is a spokesman for the Church. I do not say that the unspeakable crimes of the Church for 2000 years had always the blessings of the Vatican, but it vaccinated its believers with the idea: We have the true God, and the Jews have crucified Him. The Church sowed hate instead of love, though the Ten Commandments state: Thou shalt not kill.”

Hermanns, William. Einstein and the Poet--In search of the Cosmic Man . Branden Books. Kindle Edition. (emphasis not in the original)

Today archaeology and science are creating uncomfortable question for the history-centred approach to Jesus. Yet, Christmas is a great celebration for a vast section of humanity. If we remove the history-centrism from Christianity, then what remains of it?

Bart D Ehrman is James A Gray, distinguished professor at the University of North Carolina. Author of the scholarly work Jesus before the Gospels (Harper Collins, 2016), in his column two days before Christmas this year, he writes:

In this season, I’m thinking of the stories of Jesus’ birth in Matthew and Luke.  As a critical scholar of the Bible with very serious historical interests, I have no trouble at all saying with heart-felt assurance and emphasis that these stories did not happen. I don’t believe Jesus was born of a woman who had never had sex, or that he was born in Bethlehem. I don’t think there was a world-wide census for which Joseph had to return to Bethlehem to register under Caesar Augustus.  I don’t think any of it happened: “No room in the inn,” the worship of the shepherds, the coming of the wise men, the slaughter of the innocents. But I can see how these stories seem “common sense” to Christians and provide meaning for them as they reflect on the season and its importance. ... That would be probably what most people would call “myths” if such stories occurred in some religion other than their own. And it’s what people in non-Christians would call “myths” when looking at these stories in the Christian religion. I guess I’m increasingly aligning with that view.

In fact, by removing Jesus and mythological events associated with his life cycle from the historical time, Ehrman makes Jesus a psychological God-principle for those born in Christian tradition. If this view is accepted, then there is no need to demand that Jesus was indeed born on a day aligned to winter solstice 2,000 years ago and that he indeed died for our sins and hence we remain sinners unless otherwise we drink his blood.

Theological obsession with history-centrism promoted antisemitism, which ended in the Holocaust. In Africa, the same history-centrism imposed the Biblical story of Ham as history and resulted in the Rwanda genocide. Now one has to think of the kind of obsession the institutional churches in India already show for the Aryan-Dravidian race narratives in India.

In India, with evangelical Christianity becoming a political problem and a threat to Indic culture and spirituality, we need to battle aggressively against the history-obsessed nature of Christianity. In places like Tamil Nadu, Christmas celebrations have also become events for political bargaining with corrupt leaders by the Church (both Roman Catholic and CSI). They also promote, through history-centricism, pseudo-histories claiming that the original Hinduism was a Brahminical corruption of the historically only true religion Christianity.

Just as how hatred against Jews was systematically promoted by the church through the claims of Deicide, in India, hatred against Hinduism is created by false stories of Hindus killing Christian martyrs like St Thomas 2,000 years ago and one Devasahayam Pillai in Kanyakumari district 200 years ago. History-centrism of Christianity through fabricated history creates false martyrs and promote communal hatred.

Interestingly, the persecution stories of the Christian saints which the church deems as having a great potential in India are interestingly derived from the stories of Buddhist saints and Bodhisattvas. Barlaam and Josaphat – the saints of Christianity were appropriated from the Buddhist mythology. With Jains and Buddhists writing competitive versions of their persecution in the hands of each other, this literature seemed to have influenced Christian creation of martyrs.

Obsession with historicism of Christianity and its urge for expansionism was so great that in the twelfth century, Christendom strongly believed that India was ruled by a Christian emperor called Prester John. What is even more interesting is the fact that in 1165, the Byzantine Emperor was given a letter, purportedly from Prester John, who ruled a nation where a river from paradise called Indus was flowing throughout the country. Vatican was excited enough to dispatch a mission to enlist the support of Prester John against Saracens. In fact, today, this letter is mostly known as the handwork of archbishop of Mainz. This shows how the historical knowledge received from Greeks and Romans actually atrophied in the West with the ascent of Christianity before becoming completely delusional until later during the colonial times. This is just one example of the fallacies religious obsession with history-centrism can create.

Hence, what should be the Indic response to Christianity? Those who condemn Sri Ramakrishna Mission for celebrating Christmas should not forget what Swami Vivekananda himself said about the historicity of Jesus. He opined that it was the Jewish seer Hillel whose teachings were rehashed as those of Jesus. He said:

On the whole, I think old Rabbi Hillel is responsible for the teachings of Jesus, and an obscure Jewish sect of Nazarenes a sect of great antiquity suddenly galvanised by St. Paul, furnished the mythic personality, as a centre of worship. The Resurrection, of course, is simply spring-cremation. Only the rich Greeks and Romans had had cremation any way, and the new sun-myth would only stop it amongst the few.

Further, the critics should remember that there is a large number of Indians whom we have lost to Christianity for whatever reasons. In India, Christianity is more like the mediaeval Christianity of the West and is also a political tool in the hands of Breaking India forces. So we need to approach Indian Christians and make them understand the fallacies of historicism that is central to their theology. When the fallacy of historicism is removed, the Christ cult can become harmless deprived of its expansionist tendency. Yet, the devotion may remain for which the solution is provided by the approach of Sri Ramakrishna Mission.

So Happy Winter Solstice, Mithra Jayanthi , Christmas and Good Governance Day to all!