Azhwar And The Archaka: A Wake-up Call To Realise What Dharma Really Is 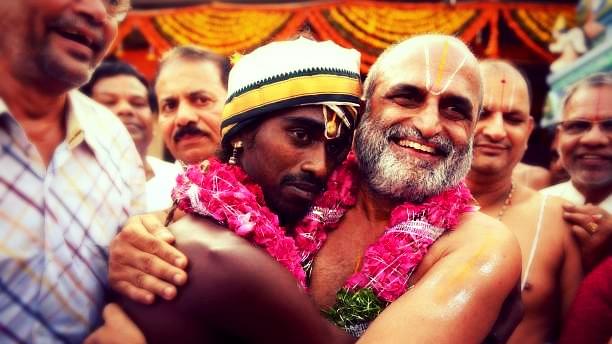 Almost 18 years ago, Kancha Ilaiah was casting the usual aspersions on Hinduism, with questions like, "would the priests be ready to teach the scheduled communities the sastras and train them to become archakas”. (It is easy to turn an archaka into a priest. However, unlike a priest in Christian tradition, here the archaka (a Hindu priest) is more a servant performing the daily ceremonial activities to the deity). Ilaiah’s was just a rhetorical question that demanded no answer but was asked merely to attack Hinduism.

However, what Ilaiah was not prepared for at that time was for his question to be answered in the affirmative, in a clear, categorical manner by the then vice-president of the Telangana Archaka Samakhya – Dr M V Soundarajan:

If Thirukulathar youths are willing to take up the profession of an archaka, I will train them personally.

‘Thirukulathar’ was the term Hindu theologian and philosopher Sri Ramanuja used to refer to the scheduled community in the Sri Vaishnava tradition.

There was no response from the other side.

Down the line, in January 2018, his son, C S Rangarajan, now an archaka in Hyderabad's Chilkur Balaji Temple, would be invited along with other religious leaders for a meeting organised at the Osmania University premises by 'SC/ST Reservation Protection Samithi'. As they were discussing the problems faced by the scheduled communities even today, Rangarajan emphasised that the atrocities were not because of Hinduism but were, in fact, against the teachings of Hinduism.

He narrated the history of Thirupaan Azhwar. Azhwar was born in the community of musical bards, then considered untouchables (probably because of the influence of the dogmatic moralism and life negation of non-Vedic traditions). The archaka, who was going to fetch water for the ceremonial bath of deity Sri Ranganatha of Srirangam, saw the azhwar immersed in singing hymns in praise of Lord Vishnu. In order to distract him and force him to move, the archaka hurled a stone at the azhwar. The stone hit the azhwar on his temple and he started to bleed. Then the archaka returned to the temple only to find the deity bleeding too. The archaka, called Lokasaaranga, then heard a disembodied, divine voice commanding him to carry the azhwar on his shoulders and bring him into the temple. He obeyed. Thirupaan Azhwar was hence called 'Muni-Vahanan', he who has as his mount a seer.

As Rangarajan narrated this incident to point out that the lord himself had opposed social evils like untouchability and temple entry restrictions, he was asked point blank if such an event would happen now.

“Will you do that yourself?” the question was this time not empty rhetoric but stemmed from the real agony of humiliation that the scheduled communities have been made to suffer.

“I will,” answered Rangarajan spontaneously.

The organisers grew perturbed by the turn the discussion was taking. They diverted the topic.

But then, it happened. The temple, where Rangarajan was the priest, was celebrating Brahmotsavam, and as Rangarajan stood before the deity, he said he felt a voice inside the corridors of his own heart. The words were clear 'Muni Vahanan!' “Was Ranganatha talking to me? Or is it my own conscience? It is hard to say. I do not know. But I heard it clear,” he said during a conversation with Swarajya.

So, he said to the temple authorities that he would re-enact what was done by Lokasaaranga to Thirupaan Azhwar. Surprisingly, there was not a single person who opposed it. The rest, as they say, was a milestone in the history of social harmony. Four-centuries-old Sri Ranganathaswamy Temple of Jiyagud in Hyderabad was chosen for this event, where the 60-year-old archaka carried on his shoulder a Hindu belonging to a scheduled community.

Aditya Parsari is no ordinary man. He is a Hindu well versed in sastras and himself was a Sri Upasaka. So, he insisted that he would only be wearing a red dhoti and not the white one. The archakas agreed. Despite the knowledge of sastras, Parsari and his family had faced discrimination by the so-called upper castes just because he belonged to the scheduled community. An emotionally surcharged Parsari remembered how humiliated and pained he felt when his family was barred from entering the Hanuman temple in Mahbubnagar, his native place. But he knew that in the sastras and the Upanishads, there was no room for such a discrimination. “The discrimination is not in the sastras but in the minds,” says Parsari.

Rangarajan agrees. Talking to Swarajya, he paraphrased Dr Ambedkar: "Dr Ambedkar had said that despite the provisions in the Constitution, despite the affirmative action of reservations, the mindset of those who consider themselves upper caste, has to change if caste discrimination and inhuman practices like untouchability are to die. And this is a first step I am taking to change the mindset."

The decisive and symbolic act for social justice and harmony transcended language barriers too. As the nadaswarams played Annamaacharya’s famous Telugu verses of Brahma Okate, the Tamil azhwar’s life event was re-enacted. The song by Annamacharya emphasises the divinity in all humanity, irrespective of caste differences.

After the 'Muni Vahana Seva', there was also a press conference. As they wanted both Parsari and Rangarajan to sit and face the questions, the archaka refused to sit. "I am his vahana. A vahana has to stand," he pointed out. "Are you from Tamil Nadu?" I asked him. "Oh! I belong to Vaikuntha – the eternal abode of Vishnu,” he said, and then added humorously, "Consider me a non-resident Vaikunthan".

During the press meet, there were typical questions from the old establishment. "Were you doing this for ghar wapsi?" "Is this to smooth the anger of Dalits over fear of SC-ST acts dilution?" etc. Many newspapers carried this news on the front page. Parsari and Rangarajan though, are unaffected by the media coverage. Their aim is to remove the mental malaise called caste discrimination and they want to change the mindset of those afflicted by the disease of casteism. It is their resolve and conviction that makes this event a mighty beginning.

It may not be an accident that Parsari and Rangarajan reflect Dr Ambedkar’s view that change of mindset is a tough and real fight against social discrimination. Reservation and legal protection only catalyse and accelerate this fundamental change. However, the prime mover needs to be the spiritual feeling of oneness of all as part of the divine. Dr Ambedkar had emphasised this himself. In fact, he was a great admirer of Sri Ramanuja. He was aware of Sri Ramanuja sampradaya’s connection to his own Kabir Panth through Ramananda. It was only Ramanuja who has courageously and consistently advocated the cause of equality, he had said.

The legend that injury to Thirupaan Azhwar causes injury to the divine idol of the deity shows how wrong it is to categorise our worship as ‘idol worship’, said Rangarajan. The deity inside the sanctum resides in the heart of all, irrespective of all artificial and social barriers we construct. “And I owe it all to the vision my father gave me and the grace of Ranganatha,” an emotionally-moved Rangarajan said.

It is hard not to be moved – just remembering the history of Thirupaan and its re-enactment. “We discriminate not because of sastras but precisely because we are not aware of our own Dharma as it manifests in the life of Thirupaan Azhwar. So we do this as an atonement and a wake-up call for this generation to understand what really our Dharma is,” he said.