Can A Suffocating Delhi Free Itself From The Deadly Grip Of Air Pollution? 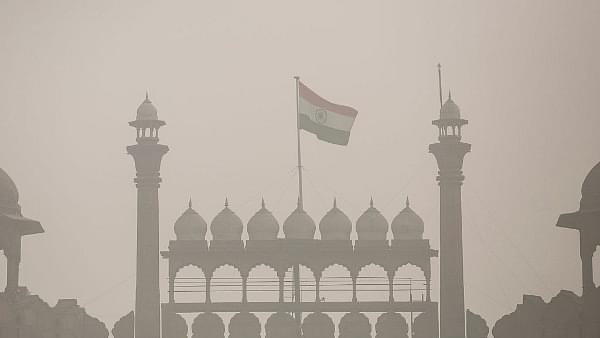 Delhi has earned the dubious distinction of being one of the most polluted cities in the world today. Every year, especially during winter, air quality dips to hazardous levels in the capital and sets in motion a torrent of reportage, statements by politicians, blame game and, perhaps, a few emergency measures. But the problem returns every year in the absence of any long-term measure. On 8 November last year, pollution surged to such an extent that some monitoring stations recorded an Air Quality Index of 999, well above the ceiling for the worst category, “Hazardous”. (The safe limit is under 150.)

Educational institutions in Delhi had to be closed for two days in November as the pollution level rose to dangerous heights. The issue became an international controversy after Sri Lankan cricket players vomited at the Feroz Shah Kotla cricket stadium during the third Test match against India. There are also instances of foreign embassies in New Delhi expressing concerns over the levels of air pollution and issuing alert notices to their citizens. In November 2016, the United States embassy raised the alarm on the pollution levels and came up with measures such as installing supplementary air filtration units and constructing vestibules to provide clean air.

A report titled “Airpocalypse” by Greenpeace ranked Delhi as India’s most polluted city, followed by Faridabad in Haryana, Bhiwadi in Rajasthan, and Patna, Bihar’s capital. According to the report, the most polluted Indian cities are spread across the Indo-Gangetic plains, while southern cities are better off. The report estimated that close to 550 million people live in areas where the national standards for PM 10 (particulate matter) are far surpassed, including an 180 million in areas where air pollution levels are more than twice the stipulated limit of 60 grams per cubic metre set by Central Pollution Control Board (CPCB). The issue of air pollution is thus not confined to just one state, and solutions naturally would require the participation of states across the country.

As is the case with any policy problem, there are several causes behind the pollution. While increasing vehicular traffic, construction, and industrial waste have been the established primary culprits, burning of agricultural residue in northern states has emerged as a leading cause for a seasonal spike in pollution in recent years. In the absence of any other economically viable option to reuse the agricultural stubble, farmers prefer the inexpensive approach of setting the stubble ablaze before sowing for next season. While this has been a traditional practice for years, research has now established that repeated burning is not good for the soil, and the resulting smoke is a health hazard.

The gravity of the problem was acknowledged by Union Finance Minister Arun Jaitley in his budget speech this year. He spoke of a scheme to support the governments of Delhi and neighbouring states in tackling air pollution. “Air pollution in the Delhi-NCR region has been a cause of concern. A special scheme will be implemented to support the efforts of the government of Haryana, Punjab, Uttar Pradesh, and Delhi to address air pollution and subsidise machinery required for in-situ management of the crop residue,” Jaitley had said.

In November last year, the Union Environment Ministry had notified a “Graded Response Action Plan”(GRAP) against air pollution for Delhi and the National Capital Region (NCR). This was done especially in the wake of increased pollution levels during winter. Such a plan lays down stratified actions that are required to be taken as and when the concentration of pollutants (particulate matter or PM) reaches a certain level. Such plans have undergone experiments across the world successfully. Paris recently implemented the odd-even road rationing scheme when PM 2.5 levels crossed 95 micrograms per cubic metre air. It also made public transport free to encourage people to leave their vehicles at home.

According to the GARP plan formulated by the Supreme Court-mandated Environment Pollution Control Authority (EPCA), action would be taken if PM 2.5 levels reach over 300 micrograms per cubic metre and PM 10 levels cross 500 micrograms per cubic metre. A Delhi-specific comprehensive action plan has also been prepared by the CPCB. At the level of 100 micrograms per cubic metre of PM 2.5, for example, mechanised sweeping and sprinkling of water along roads have to start. Traffic police personnel have to ensure smooth flow of traffic, and all pollution control measures that are already in place, such as stopping landfill fires, and enforcing ‘pollution under control’ norms and a ban on firecrackers, have to be imposed strictly.

The EPCA is responsible for implementation of the plan under the Environment (Protection) Act, 1986, which will delegate responsibility to the concerned departments. These include the municipal corporations of all NCR towns, the traffic police, police, transport departments, Delhi Metro Rail Corporation, Delhi Transport Corporation, Resident Welfare Associations, Public Works Departments and Central Public Works Department, Chief Controller of Explosives, and the Petroleum and Explosives Safety Organisation. Each body has been set a task that it will have to carry out when the EPCA asks it to, based on the concentration of pollutants. The responsibility of monitoring pollution levels across the city is with the CPCB through its stations located across the city. Daily reports are sent to the EPCA, which then chalks out a plan accordingly.

In addition, the government has also released its much-awaited draft National Clean Air Programme (NCAP) to tackle air pollution across the country, in April, and opened it up for public feedback until 17 May. The plan aims to reduce air pollution by 35 per cent in the next three years, and 50 per cent in the next five years, across the 100 cities identified under the NCAP. To tackle vehicular pollution, India is also to switch to Bharat Stage VI vehicle emission norms by April 2020, skipping an intermediate stage. Stubble-burning, however, remains a blind spot. Even though National Green Tribunal has imposed a ban, its implementation has been patchy in the past. The problem is likely to surface once again this year, unless strict implementation of the ban is ensured across states. What is also perhaps needed by the agricultural communities is a viable alternative to residue burning.

While a number of steps have been taken and committees formed, how these moves fare ultimately will become apparent later in the year. In the meanwhile, a report by World Health Organisation (WHO) has once again put Delhi on top (and Mumbai in the fourth place) on the list of the most polluted cities in the world.