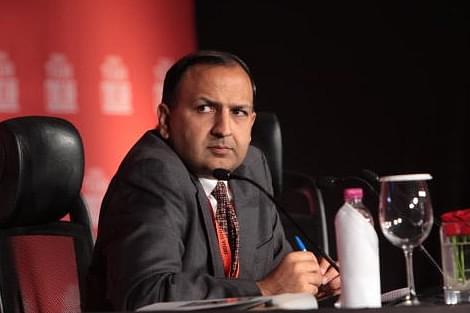 Taking a break from academic prose, Mehta turned to sardonicism (defined technically as a narrative style characterised by “bitter, scornful derision; cynical, mocking and sneering”) in his polemical address to “nationalists”. Mehta made eight key points. Consider each.

One: “You (nationalists) are now the political establishment. By definition you have to be part of the establishment to be counted as a nationalist.”

Two: “Unity in Diversity was a great fraud. Unity in Purity is what we need. Nationalism does not require just unity. It requires sameness.”

Sarcasm is a particularly low form of wit. But Mehta’s sardonicism doesn’t obfuscate the truth: real nationalism seeks unity in diversity, not unity in purity. Unity in purity is sought by nations on India’s western and eastern borders.

Three: “You (nationalists) were misunderstood just last week. Your opponents say that you displayed deep insecurity and political myopia by launching an attack on tweets from random celebrities based abroad. They ask: which secure nationalist government launches a propaganda blitzkrieg against some foreign pop stars or activists, whose tweets and retweets have little bearing on Indian politics? Look at all the things this massive national counter-attack against Rihanna and Greta achieved?”

More obfuscation from Mehta. The criticism directed at tweets by Greta Thunberg, Rihanna and Meena Harris was that they missed the point about the farmers’ protest. Violence on Republic Day was engineered by Khalistani separatists. Does Mehta mention the word Khalistani even once in his diatribe? Of course not. That would give the game away.

Four: “If you are members of the Hindu race, you are never foreign, regardless of nationality and location. This is the real meaning of ‘Vasudhaiva Kutumbakam’.”

Hindu race? Using a Hitlerian Aryan race metaphor, Mehta plumbs the depths. I’m not of the Hindu “race”. He presumably is. I don’t regard religion as race but as philosophy. That needs more enlightened thinking than Mehta seems able to muster.

Five: “India is so great: It can organise rallies in Houston and endorse American presidential candidates. But no one can comment on our affairs. We are ‘Vishwa Guru’ not ‘Vishwa Shishya’.”

When anger overwhelms reason, you get this sort of piffle. It requires no rebuttal. As an argument, it collapses under its own weight.

Six: “We would have beaten the Chinese on internet bans, requiring academics to seek government permission if they want to hold Zoom conferences, denying journalists access to protest sites, managing social media, but too much democracy comes in the way. But, at least, we are prototyping our barbed wires and barricades.”

The use of the words “barricades”, “barbed wires” and “too much democracy” serves up more intellectual sleight of hand. No context is given. The violence on Republic Day by farmers’ supporters that left hundreds of Delhi policemen injured, many requiring hospitalisation, is not even mentioned. Why would it be? It would contextualise the barricades and barbed wires.

Seven: “If Sachin Tendulkar and Karan Johar tweet in the same voice, how can anyone else think otherwise?”

The sardonicism was lost on the Maharashtra government. Home minister Anil Deshmukh actually ordered a probe into whether the BJP had “pressurised” Sachin Tendulkar, Lata Mangeshkar and other Indian celebrities to endorse the central government’s stand against international public figures. These public figures had earlier endorsed the toolkit on disrupting Republic Day, leading to egregious violence.

Even in this one moderately sensible comment in Mehta’s invective, a key issue is left unresolved: the merit of agricultural reforms. The new farm laws have been endorsed by virtually every apolitical agricultural economist. And yet Mehta defends the farmers’ demand that falls barely short of blackmail: repeal or else we will continue to endlessly disrupt and damage the economy in and around the national capital.

Mehta ends his sardonic polemic addressed to “nationalists” with this: “The new nationalism had to be better than the Congress. It had to actually bring the border to our doorstep. No, it had to go further: it had to partition our identities, our communities, our families and our souls. After all, the more borders we create, the stronger the nation becomes. On behalf of all those who do not pass the establishment test, we sincerely apologise for misunderstanding you (nationalists).”