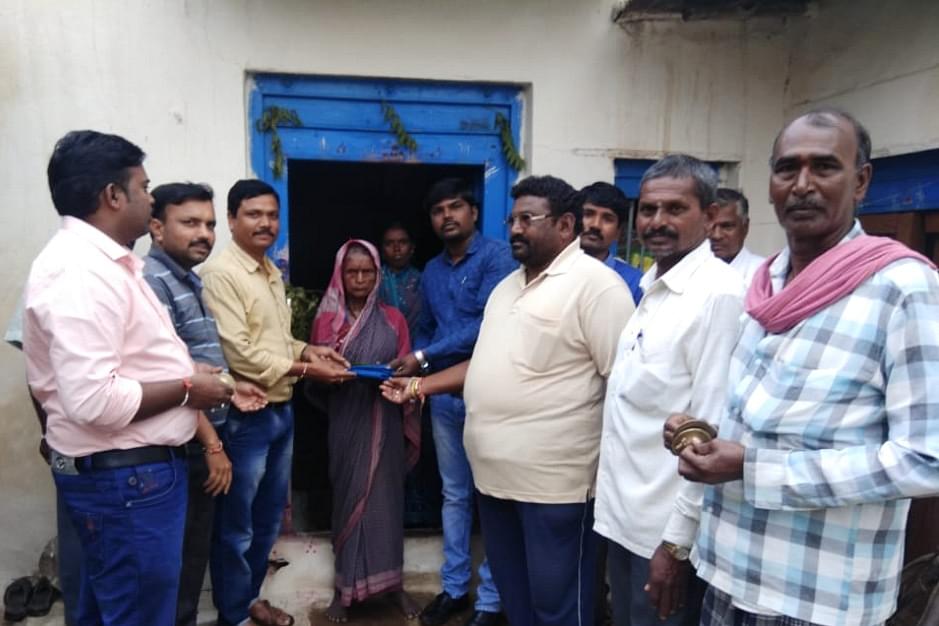 TMC officials handing over the ‘tamboola’ and requesting people to build toilets.

Umpteen efforts have been made by various people in charge to ensure their districts, their taluks and their area of jurisdiction achieve the open defecation free (ODF) status. A quick look at the hashtag #ODF will prop up an entire timeline of effort by every nook and corner of the country and from people from all walks of life on the various activities being undertaken to alert people to build toilets and help achieve the ODF status

From walks to plays to embarrassing people answering nature’s call in the open to displaying pictures of gods at such the efforts are commendable.

But in this tiny town of Lakshmeshwar in Gadag district of north Karnataka, the town municipal council officials decided to get divine help to deal with open defecation.

In the month of Shravan, there is a tradition in north Karnataka where groups of people go around town singing bhajans and visiting houses and offering them tamboola (betel leaf and nut symbolically offered as an offering) each morning wishing them well. So when officials here found that despite all their efforts, open defecation was still a menace, they chose to adapt the religious practice to drive home the point.

Along with six pourakarmikas, two peons, the environment engineer Anand Badi, senior health inspector Nilesh Hadimani, junior health inspector Manjunath Mudgal, the chief officer Ravindra Bagalkot decided to use devotion to deal with open defecation. They got songs written urging people to build toilets and stop open defecation and thereby live healthier lives and set them to the tunes of popular bhajans. Armed with a harmonium, a tabla and cymbals the team of around 10-12 people would take to the streets singing aloud the ‘bhajans’. This ‘lakshmiswara purasabhe bhajana mandali’ would specially sing in front of the houses of those returning from answering nature’s calls in the open. As is the tradition the people would have to entertain the ‘mandali’ singing the ‘swachhata bhajans’. Bagalkot would then offer them tamboola and urge them to get toilets built in their homes. “Else we shall be back at your doorstep and sing the bhajans every day until you build toilets,” said Bagalkot to the people.

And build they did. They ran the bhajan tour from 15 August to 9 September every morning before office hours. ‘Each morning from 7 am to 9 am we went door to door singing bhajans and people were embarrassed as well as inspired. Over 50 people sought help and we offered them the readymade toilets,” explains Bagalkot with glee.

The lyrics of the Bhajan they composed are as follows :

They had previously tried distributing pamphlets and garlanding those attending nature’s call but the response to the month long campaign has been commendable they say. Until 2015, the number of houses that didnt have toilets here was around 3,300. Post the ODF campaign, the town has seen around 2,060 toilets being built. 700 houses are yet to get their own toilets but that too will soon be done, believe the officials.

By the time the ‘bhajan’ ODF campaign ended, around 50 households had responded. Readymade toilets are being now provided to the households who have sought help. People have also joined hands in singing bhajans and raising awareness among fellow citizens.

“Now that Shravan is over, we plan to hold orchestras in different locations in different wards to ensure all 23 wards ODF,” says Bagalkot. Well, this seems like a perfect personification of the adage , ‘Cleanliness is next to Godliness’ and so be it.

The Swachh SurvekshanGrameen 2018 launched by the mission in July will rank villages and districts on the basis of sanitation parameters and the top performing villages will be awarded on Gandhi Jayanti (2 October) this year. As far as rural Karnataka is concerned, as per reports, 20,826 villages out of a total 29,736 have declared themselves open defecation free of which 19,712 have received the ODF certificate from the Quality Council of India.

"Government of Karnataka has constructed a staggering 22 lakh toilets in our villages & another 5 lakh toilets will be constructed before 2nd Oct in order to achieve the status of Open Defecation Free State" - @DrParameshwara (Hon'ble Deputy Chief Minister of Karnataka) pic.twitter.com/zWpp0iRsQR

According to the Swacch Bharat Mission, while only 6.03 per cent of the villages in Karnataka were open defecation free in 2015-16, it currently stands at 88.07 per cent.

With the Swacch Sarvekshan grameen taking off, all villages and districts geared up to achieve the ODF status. Latest figures, as reported by the Swacch Bharat Mission (gramin), say 509 districts have earned the ODF status while the number of villages is at 496,756 as of today (30 September). This number was at 47,026 in 2015-16. IN keeping with the aim of the entire nation achieving an ODF status by 2 October 2019, the target as per number quoted by the Mission seems achievable, as the percentage of households with toilets is 94.44 as of this day (30 September) a massive leap in comparison to 38.70 per cent, which is the percentage of households that had their own toilets when the mission was first announced by Prime Minister Narendra Modi on 2 October 2014.