Fight Against Fake News: The Time Has Come For A Serious Debate 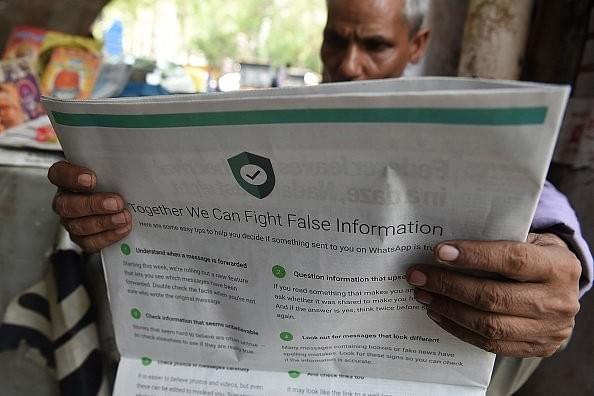 Addressing the Rajya Sabha on 26 July (Thursday), Union Minister for Law and Justice, and Electronics and Information Technology, Ravi Shankar Prasad, discussed the issue of fake news. Talking about the government reaching out to WhatsApp to enforce better regulations, he said how social media platforms were being used to incite communal violence, in light of the recent incidents of lynching reported across the country.

The discussion around fake news has been going on for over a year now. Given we are merely a few months away from the national elections of 2019, the issue has gained steam now. With over 500-million internet users in India, and close to 200 million users on both WhatsApp and Facebook, the scale at which data is being created, curated, and circulated in India is humongous. Therefore, the issue of fake news is not political alone, but one that concerns public welfare at a micro-economic level.

Unfortunately, the solution to the problem of fake news is being lost to political ‘whataboutery’. Instead of working together towards a regulation, the government and the opposition are engaged in blaming each other for the creation of fake news. Today, the parameters for the identification of fake news in India are relative, for they depend on the political ideology one professes.

In order to realise the consequences of the narratives that emerge due to fake news, the analogy of data and knowledge can be used. Data, for instance, a person’s name, phone number, email, or date of birth, cannot be used to cause them any harm. However, if the same data is processed in various ways, one can garner enough knowledge about a person, endangering their privacy.

Fake news as a report cannot cause much harm. What incites trouble is the narrative that is built on that fake report. Before the leader or media outlet that made the false statement can retract, the narrative is already in motion, setting off a chain of events like lynching today, and perhaps, riots tomorrow?

With increased digitisation in India, enhanced internet connectivity, and easier accessibility to smartphones, media outlets, and political parties have a market as big as the European Union to cater to. Therefore, unlimited information is spread across mediums, in different formats, and in various ways. From a 140-character mob-inciting tweet to an elaborate WhatsApp forward, or a cliched editorial discrediting a figure in Hindu mythology to a leader in the opposition claiming the dilution of an act that resulted in riots across cities, fabrications on social media have taken multiple forms.

For the debate to go in any direction, it must go beyond blame game and political mongering. For now, Congress, along with its allies, and the Bharatiya Janata Party have been engrossed in a chaotic blame game on primetime debates. Ideally, the discussion should be centred on public welfare in the face of increased digitisation, for the National Democratic Alliance (NDA) government might not survive the test of 2019, but WhatsApp and Facebook will surely go on to encompass users more than the population of the United States of America in another three years.

So, where lies the solution?

Can we police or monitor over 200-million WhatsApp users for keywords like lynching, riots, Rahul Gandhi, or Modi? The answer is an absolute no. India, in its imperfections, is a democracy, and therefore, for any government to even consider the idea of policing any platform is unacceptable. Two, the government in no capacity can ask any web or social media platform to censor any kind of content (with obvious exceptions). Thus, content pertaining to political discussions does not require to be censored.

The answer, therefore, lies in an elaborate regulation that takes into account user privacy and freedom of speech and expression, and this is what the debate must focus on. For starters, regulation should help control the spread of fake news, and not constrain the flow of routine information. Thus, imposing a limit on WhatsApp forwards is a good place to start (though users will surely find ways to bypass the limit). Also, tech giants must ensure stamps denoting the origin of the content, verified forwards, and constrain any avenues of spamming, as discussed here.

However, regulation at the end of the government is not going to be enough. Yes, lynching is not the problem of WhatsApp and Twitter, but that of the government. However, the government is forced to step in here because the tech giants have failed to do anything to curb the misuse of their platforms. If the government wants to hold these tech companies accountable, it may, but it should not impose any form of censorship.

Facebook lost $120 billion in valuation in less than four hours for not being able to meet desired user growth figures. Twitter too saw its stock plunging in the wake of slowing new user numbers. India, with a market of 500-million users currently, and a bilion in the next decade, should demand compliance from these tech giants for them to run their operations in India. It is not only about the ease of doing business, but systematic regulations too.

The imposition of a $5 billion fine on Google by the European Union offers a crucial lesson for our lawmakers. Limiting the number of forwards is not a step good enough for WhatsApp if it aims to trap 500 million users in the future in India alone. With great market comes great responsibility, these tech giants must realise.

The government in power and the opposition striving to take over the government in the future must realise that the issue of fake news and narratives is one that unites all. There are no filtered or selective victims here, for a single narrative can wreak havoc in our social structure. Thus, the debate must take into account the greater welfare of a billion internet users in the future. In the scheme of things, the regulation is as important as the goods and services tax and must be approached in the same manner.

Will regulation of WhatsApp or Twitter bring the number of lynching incidents to zero? There is no assurance of that, for citizens are also required to step in. Just like how the government created awareness about digital transactions, workshops and sessions at state, district and local level must be carried out to make people familiar with data, consumption of data, and how to handle the information that results from data. If the involvement of people was warranted when it was about using toilets instead of defecating in the open, their involvement is surely warranted when it’s about creating regulations for platforms they use on an hourly basis.

India is at a tipping point when it comes to internet usage. The emergence of Reliance’s Jio showed the potential Indian market holds. The lynchings depict the gullibility prevailing in some sections of this market. The construction of fake narratives through false reports by media channels backed by political parties signifies the lengths people in influential positions will go to misuse these platforms for their own motives. Thus, a regulation is no longer only a debatable option, but a necessity for the greater good. The government must collaborate with tech companies and citizens to create a regulation to address these issues. In terms of content, the motto should be to clean the platforms, not censor them.

It’s time for India to hold a real debate on fake news and narratives, for enough time and lives have been wasted already.