Free Our Temples: While We Wait For Verdict On Ram Mandir, Here’s Another Grand Temple That Needs Reclaiming 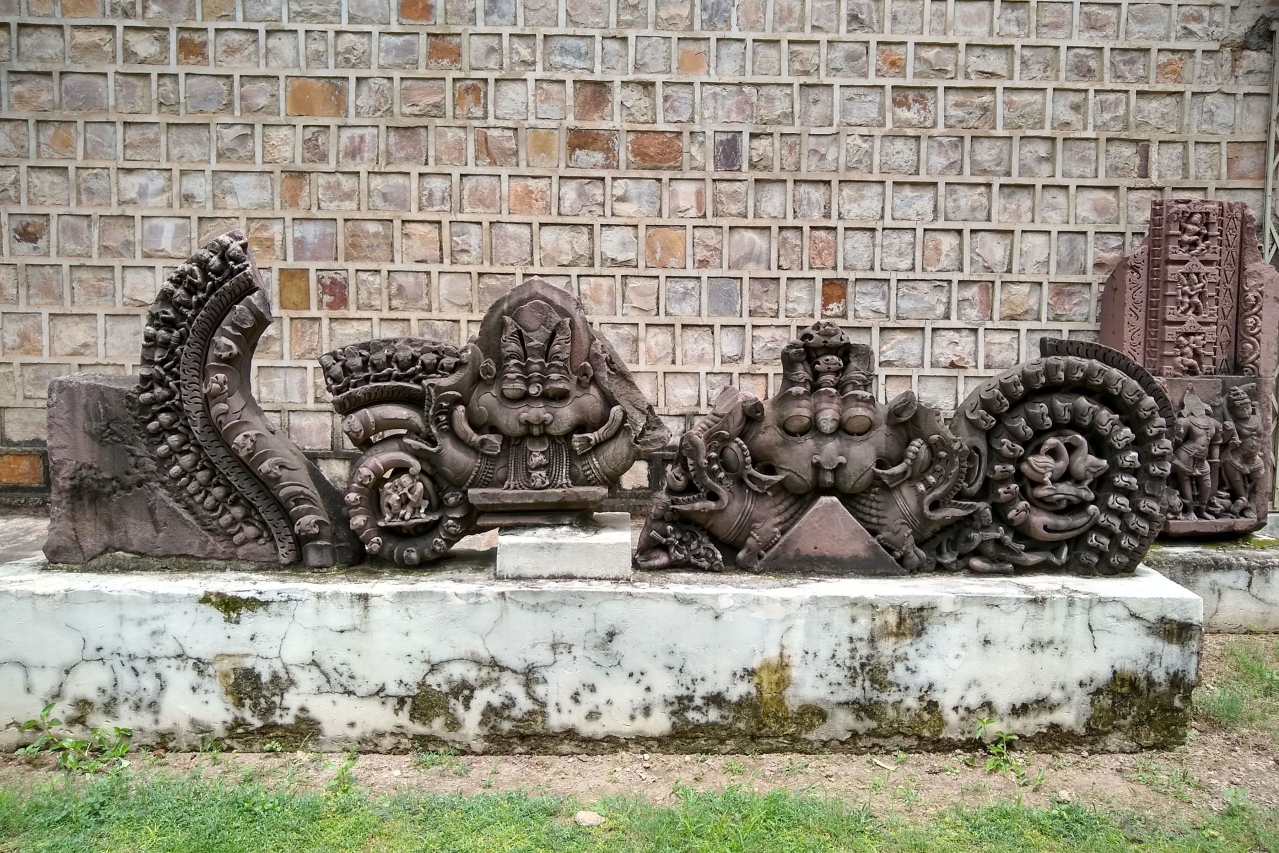 The legal dispute over the Ram Janmabhoomi land is unlikely to be resolved soon. At least that’s what the proceedings in the Supreme Court suggest. The government at the Centre is not committing to bring an ordinance or a bill in the Parliament to preempt the judiciary, paving the way for the construction of the temple. It is waiting for the verdict from the apex court which is awarding tareekh pe tareekh (date after date). Ram lalla will have to continue to live under a tarpaulin for the foreseeable future.

There are scores of Ayodhyas in India even today, places where great temples were demolished by Islamic invaders and converted into mosques. One such city is Vidisha. And the temple that met the conventional fate is Vijay Mandir or what is now officially known as Bija Mandal mosque - identified as such by the Archaeological Survey of India (ASI). An iron board installed at the side entrance of the temple says the same. However, outside the temple, a stone display board by Madhya Pradesh tourism department rightly mentions it as Vijay Mandir. 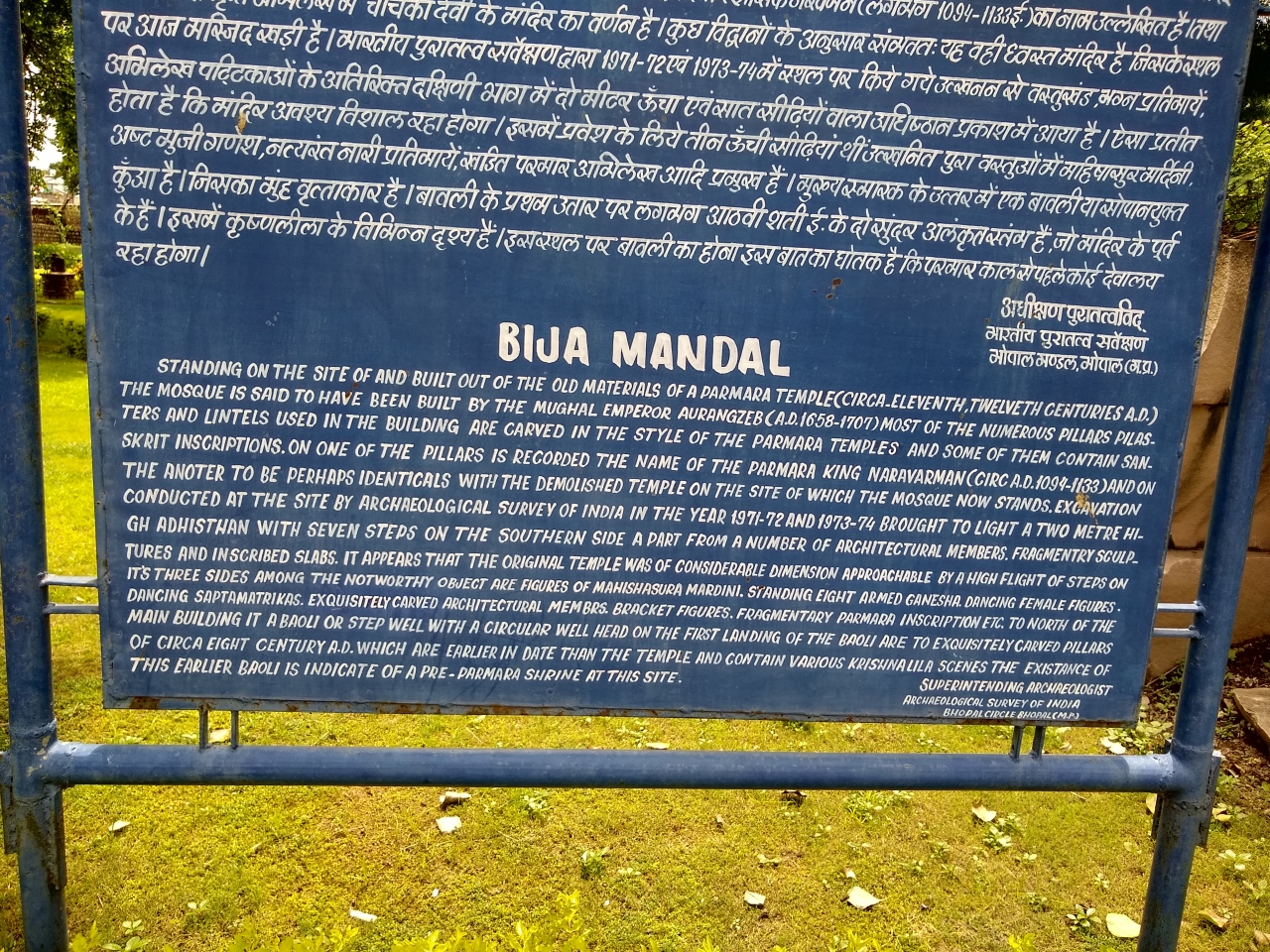 ASI board at the entrance of the temple 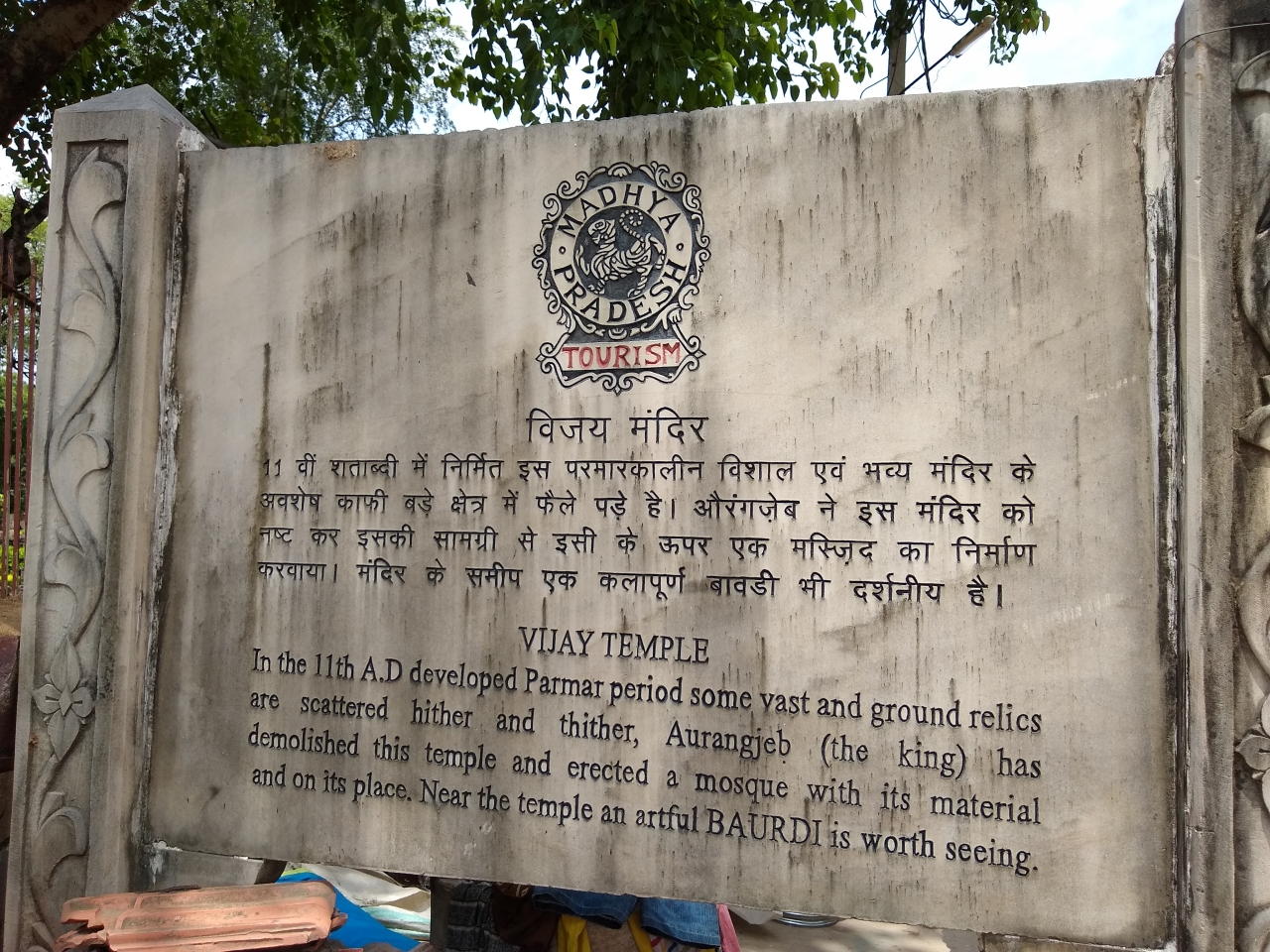 Madhya Pradesh tourism board outside the temple

The temple was demolished many times. By Iltutmish. Malik Kufar under Alauddin Khalji. Mahmud Khalji of Malwa. Bahudarshah of Gujarat. But it was rebuilt every time. Finally, in 1682, under Aurangzeb, the upper part of temple was destroyed and a mosque constructed on the plinth using the pillars, plasters and lintels from temple ruins. The mosque stood there for over 300 years until Lord Indra’s fury struck in 1992. Heavy rains that year brought the dilapidated mosque structure tumbling down exposing the old temple ruins - merely months before karsevaks brought down the Babri masjid in Ayodhya. A small one-room functioning mosque still stands in the corner of the temple premises. A small Eidgah in the corner of temple premises

Just like Ayodhya, Vidisha is also eagerly waiting to reclaim its temple. The site came under the administration of ASI in 1951, just when people were demanding that it be given back to local Hindu community. The struggle to free it ebbed and flowed for decades with Hindu activists having to court arrests on multiple occasions but to no avail. They have earned small victories. Locals do a puja on Nag Panchmi at the plinth every year. A fair and dangal is organised in temple premises on the day of this festival. The community has to seek special permission and puja is allowed to be conducted only in the open with the idols locked inside the main area behind the iron bars. Platform of the temple where devotees pray. The main gate remains locked.

Clearly, this isn’t enough anymore. The agitation to free the temple gained momentum after Nag Panchmi festival last year when incumbent Member of Legislative Assembly (MLA) from Vidisha, Kalyansingh Dangi, gave an assurance that he will try to get the locks opened in his tenure. But it hasn’t happened. This time, the MLA ticket from Vidisha has been awarded to Mukesh Tandon. He happens to be the president of Vijay Mandir Mukti and Punarnirman samiti (a committee for freeing and reconstructing the temple) and had said last year that he would try to get the locks opened soon. Tandon had also demanded that at least the ASI change name from Bijamandal mosque to Vijay Mandir in its official record. 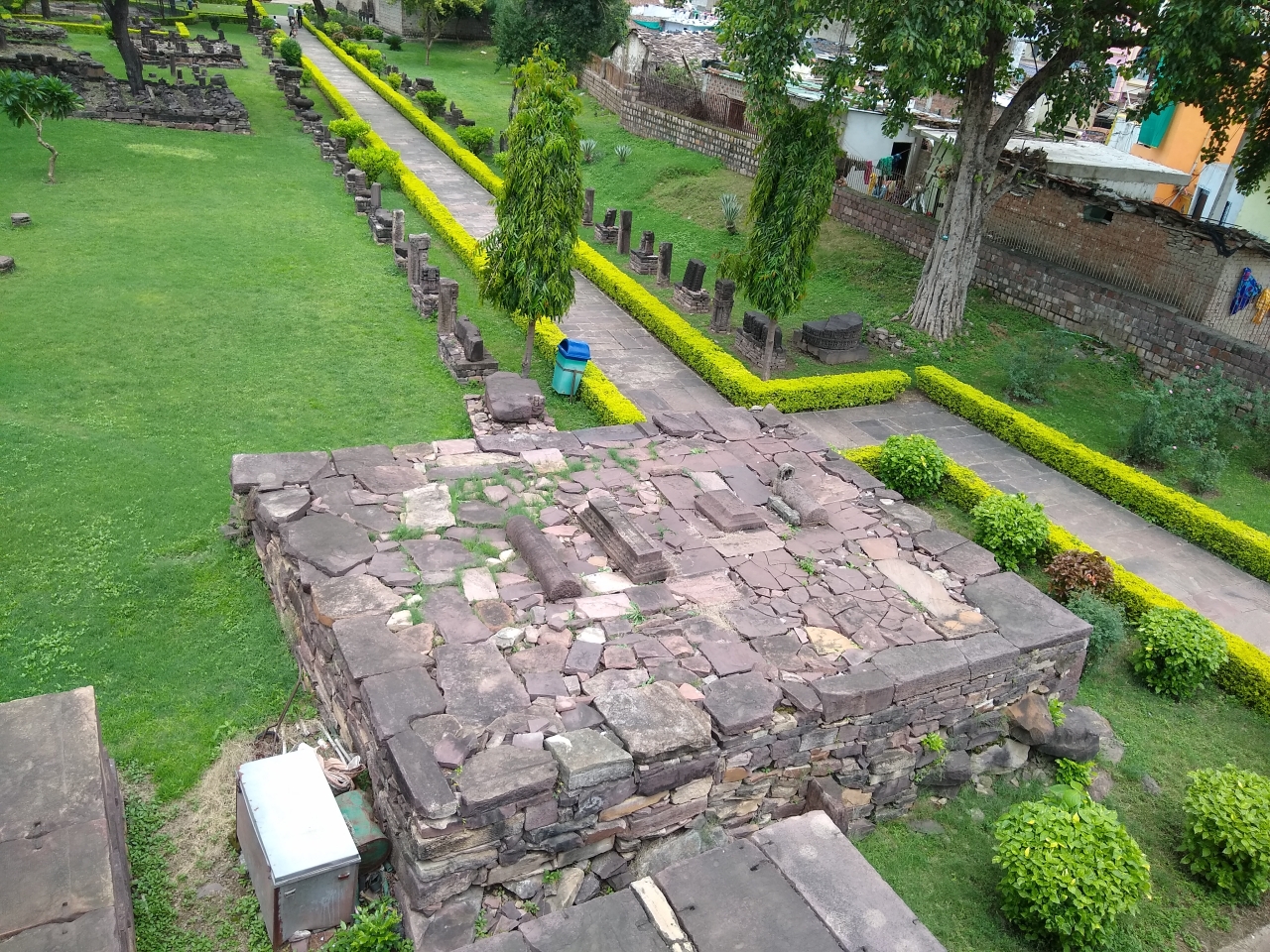 A small stone platform in the temple

Earlier this year, on 15 January, hundreds of Vidisha residents gathered in Kila Andar area where the temple is situated. They reached the temple premises along with some priests and Hindutva activists determined to break the locks and pray inside. A day before, they had met the ASI official and district magistrate in an attempt to convince them to unlock the main premises. The ASI official clarified that this couldn’t be done as it was a non-living temple. The state government, aware that emotions were running high, converted the complex into a fortress. The showdown was imminent. But the devotees backed down after pleadings from octogenarian Nandkishore Shastri. “Police officials thanked me. I told them I wasn’t doing them any favour but was only saving lives of my children,” says this former college principal.

Since then, the issue seems to have quietly been put on the back-burner.

“What will opening this temple to everyone achieve? Aren’t there enough temples out there? What’s the need for another one? It will only get dirty as more and more devotees come,” says one of the gardeners-cum cleaners in the temple. Though not the majority sentiment, such an attitude towards temples is quite widespread among North Indian Hindus. Perhaps, such ignorance stems from the fact that any memory of usefulness of a Hindu temple ecosystem in popular imagination is buried too far back in the past. 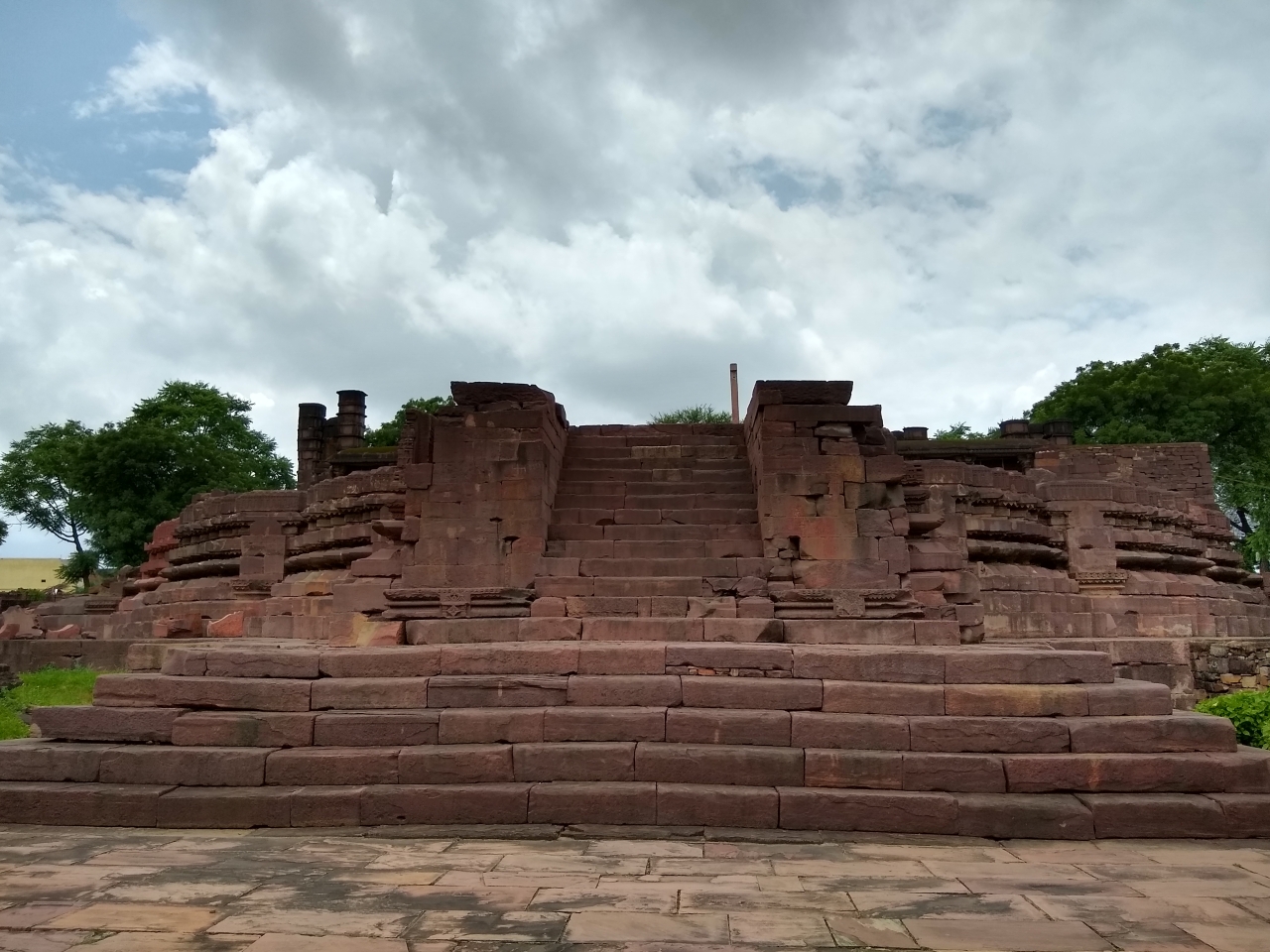 Steps leading to the platform of the temple

On expected lines, Muslims want the status quo to continue. Hindus want the monument to be opened for worship. Mohammed Sayeed, a hawker in Kila Andar area, says, “It is under ASI’s protection. There is no problem. Nor is there any major demand for opening it for worship. Only a few elements make noise every year.” His neighbour Rajkumar More disagrees. “It is well established now that there was a grand temple here. Can’t everyone see it? Even the ruins are so enormous. The government still finds some stone or idol every now and then in area surrounding the temple. Why shouldn’t it be reconstructed?,” he asks.

The dimensions of the original Vijay temple are said to have been huge: around 800 metre long premises and over 300 feet in height with its kalash visible from far. If true, this would make it even bigger than Bhojeshwar temple in Bhojpar, which is only a couple of hour drive from Vidisha and was built in the same time period - eleventh century during the reign of Paramara dynasty kings. One of the pillars still standing has inscription of Naravarman who ruled Malwa from 1094 to 1133 AD. 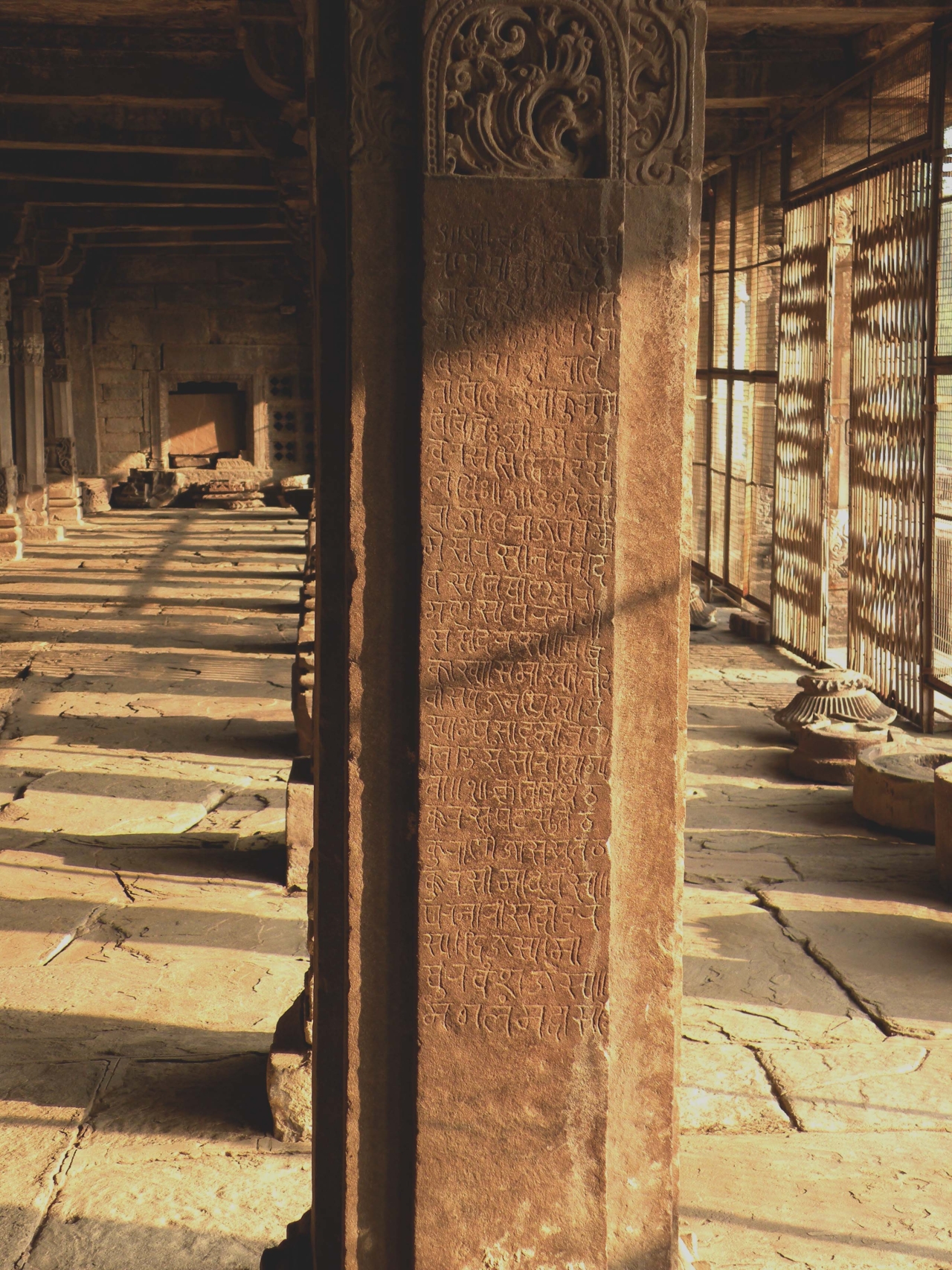 Pillar in Vijay Mandir with an inscription of Naravarman (Image source: Wikipedia)

In the temple premises, there is a beautiful baoli (step-well) which leads to a large circular well where there is water at all times. Two small pillars in front of the baoli have scenes from Krishna leela inscribed on them. These date back to the eighth century. Pillars of baoli with Krishna leela scenes. Steps lead to a circular well

In one corner of the premises, the ASI has built a small storehouse but most of the idols, though well kept, just lay outside in the open, dotting the park surrounding the main temple platform. Some are being “creatively” used as flower pots. Kirtimukha which was discovered in the excavation is one of its kind. Kirtimukha, the glorious face which is eating itself, is a feature commonly found in Shiva temples. 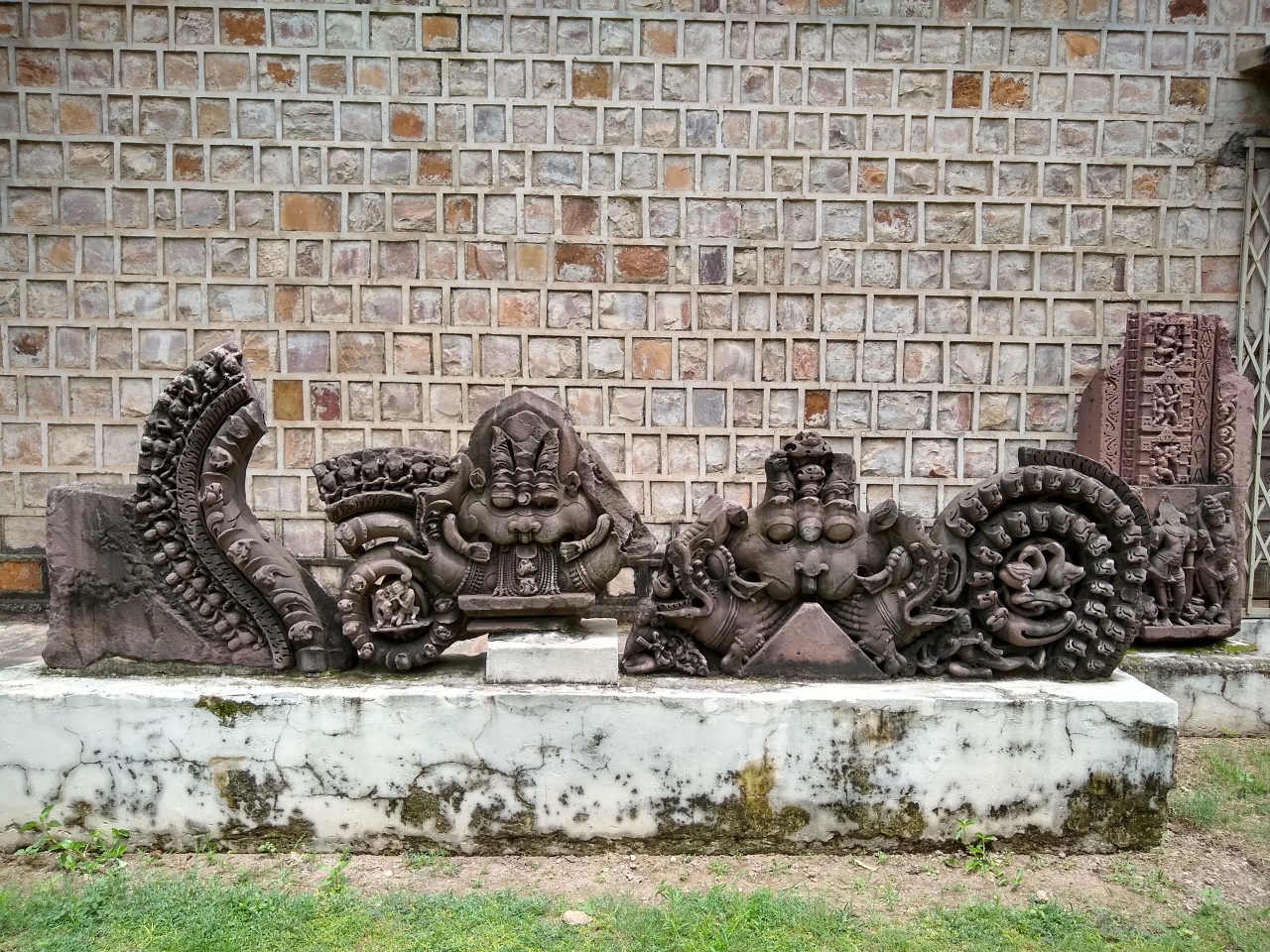 King Naravarman’s inscription in the temple is devoted to revering goddess Charchika. The temple itself was dedicated to sun god, Bhillasvamin. For this reason, Vidisha came to be known as Bhilsa. It is only fitting that the people in this town get their temple and god back. But will this rich heritage be handed back to the community? Will it be allowed to convert into a living temple again?

Sanjay Purohit, a priest at the famous Charan Teertha temple in Vidisha and head of Madhya Pradesh Kranti Pujari Mahasabha told Swarajya that the matter is now in cold storage. “Now, Mukesh Tandon who is president of Vijay Mandir Mukti Samiti is himself a candidate for assembly election from Vidisha. Even many Congress leaders support it though they may do so as devout Hindus rather than as Congressmen. Let’s see if something happens next year. Currently no one is talking about it and it’s not an issue in the election.” 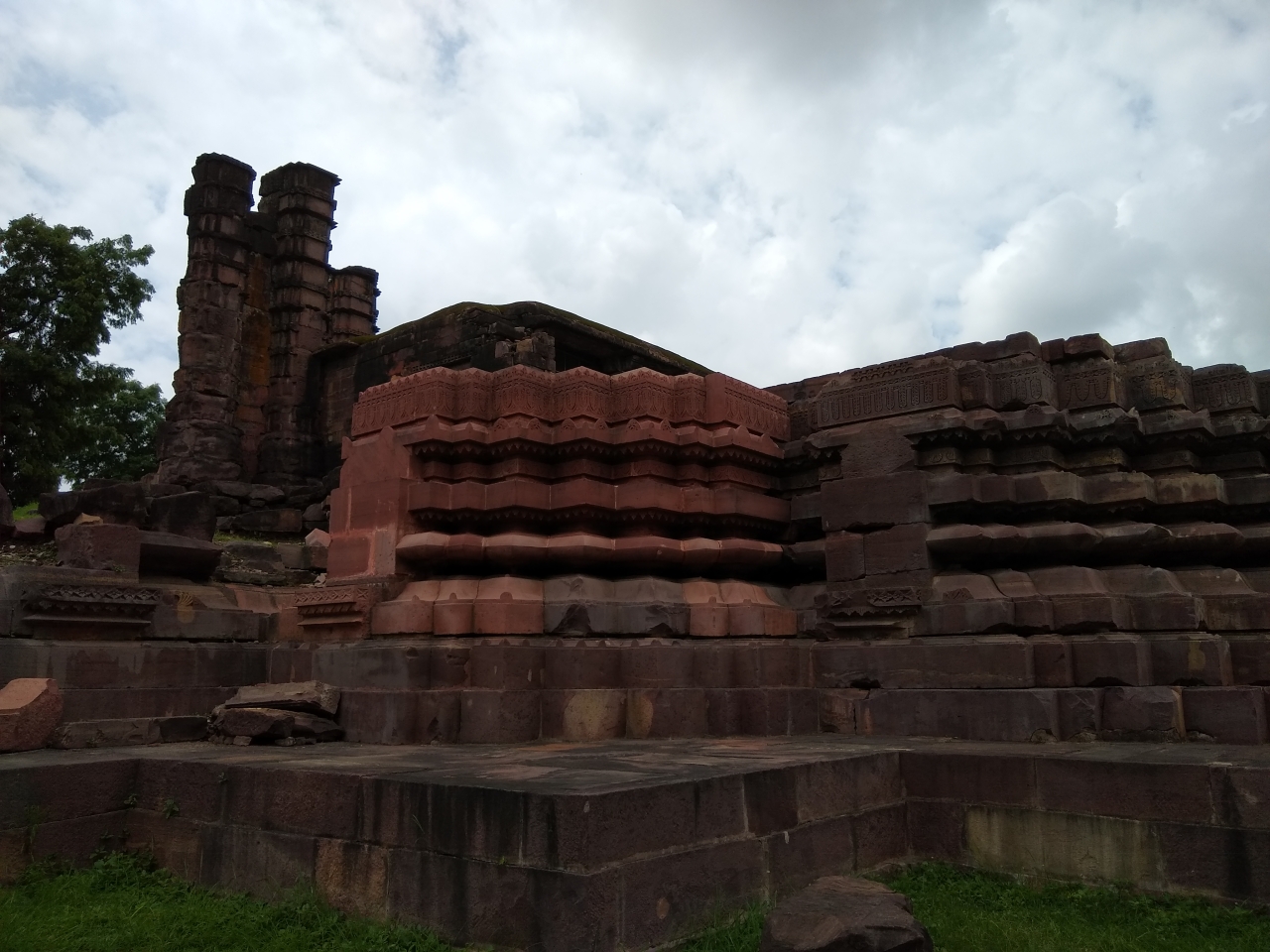 Side view of the platform

“The BJP leaders want it but won’t push it too hard as this is the only state where they get a considerable chunk of Muslim vote. In Vidisha, the margin of victory in recent past has been low. The party won’t want to antagonise Muslims over an issue that has little traction among voters,” a local Congress worker from Vidisha told Swarajya.

“Earlier, the BJP people used to say, we will built it when our government comes. When it was voted to power in the state, they started saying, it’s the Congress government at the Centre. They are not agreeing. The BJP came to power in New Delhi in 2014. Then they said, Congress is ruling municipality. Even there, the BJP won. Now, what’s the excuse? Will it be done when the BJP starts ruling the world?”, asks Professor Nandkishore Shastri. “I am 83 years old. We have held agitations and struggled for decades. Now the only prayer to god is that I get to see the temple given back to Hindus before I die,” he adds.