From Orange Vendor To Educationist: The Journey Of Padma Shri Harekala Hajabba 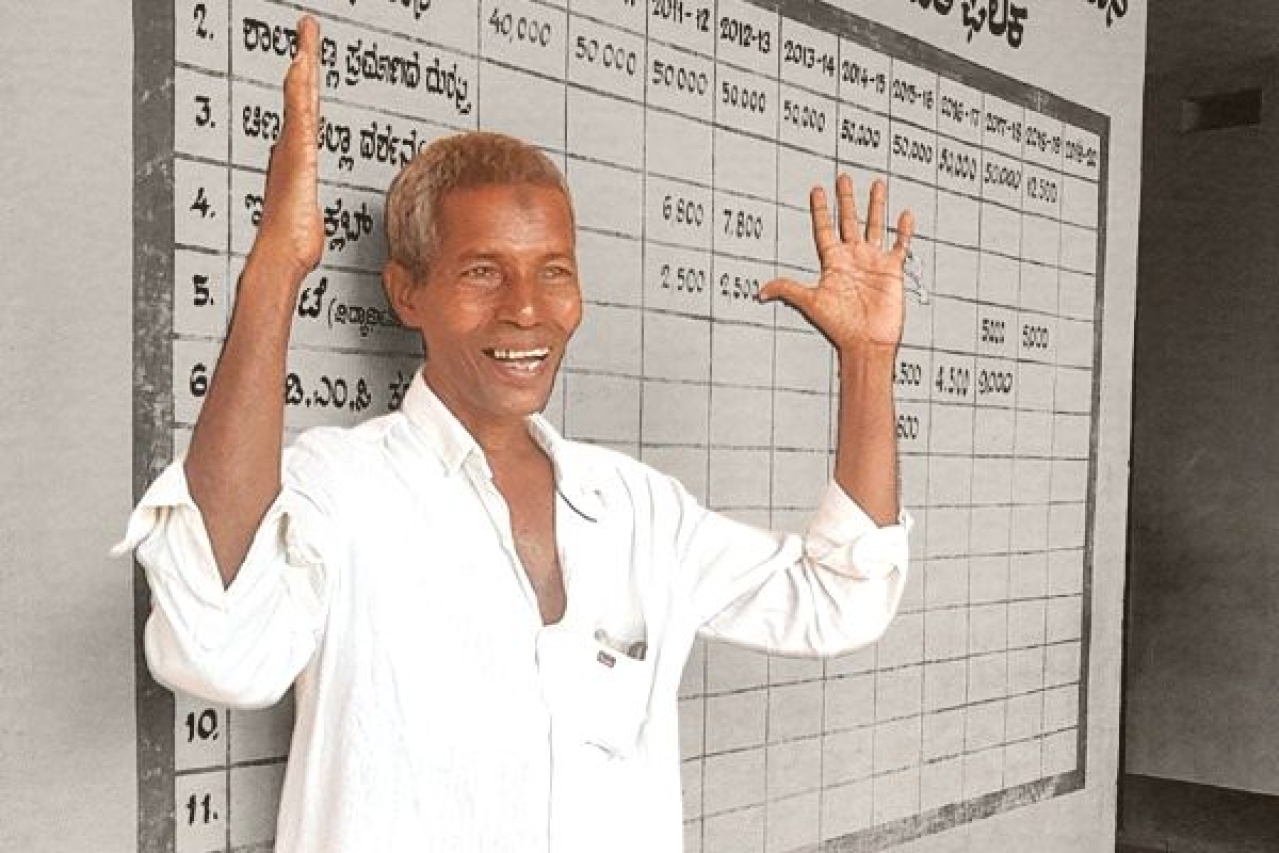 At a distance of 20 kilometres from Mangaluru is a school that has been the centre of national attention in the last few days. For tucked away in a corner atop a hillock is the Sarkari Praudha Shaale, Harekala Newpadpu, whose creator has just been awarded the Padma Shri.

Exhausted by all the talking he has been doing over the phone, Harekala Hajabba, in his late sixties, is still a happy man. Happy because the Padma Shri appeal that the then deputy commissioner A B Ibrahim had made in 2015 has been finally considered. All though he cannot even articulate the word right, it is of immense value to him for he says it may now ensure the school gets a PU college, and the attention it deserves to ensure the strength of the school remains constant.

Clad in a white shirt with the top two buttons open, and a white lungi, this orange vendor is only skin and bones. He hardly has had time to eat ever since he got the call about the award, and that has left him sapped. But his enthusiasm hasn’t dimmed one bit. 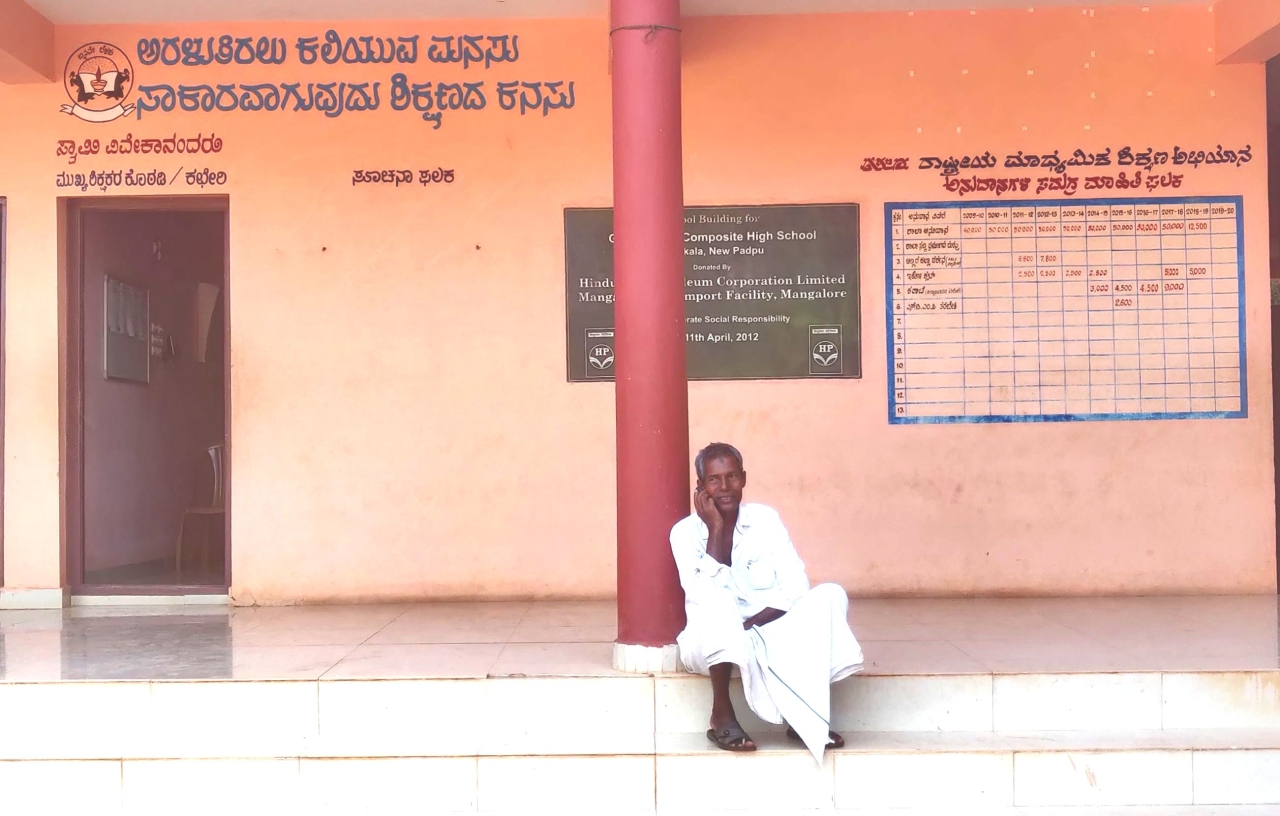 As I landed there at 8 am, Hajabba spots us from the first floor and comes down hastily.

"I am sorry you had to come this early, but later I have to go to Mangaluru to some colleges to attend some events."

He gently hits his forehead to hear Swarajya is there to meet him from Bengaluru. “Aio Bengaluraa?” He asks with a grin gently tapping both his hands on his forehead.

Speaking in a heavily Tulu and Beary-laced Kannada, he takes off his footwear as he takes us on a tour of the school starting from the first room that is the Shivarama Karantha Library. This is a room with a few book shelves, old stock of a few magazines, at the entrance of which is a key holder on to which he hangs a bunch of keys.

Every single morning, this man who can neither read nor write anything but his initials for a signature, has been opening the classrooms of this school, which he has brought to life selling oranges. He earns barely Rs 150 to Rs 200 a day but has ensured lakhs of rupees have flowed in to make possible the setting up of a primary school, and a high school on a large expanse of land that also accommodates a playground and a volleyball court.

In the next three hours, he lays bare his over two-decade-long journey of raising this school in his village. As children begin to walk in, Hajabba traces the journey of what was his way of giving back to someone who helped him in an hour of need. 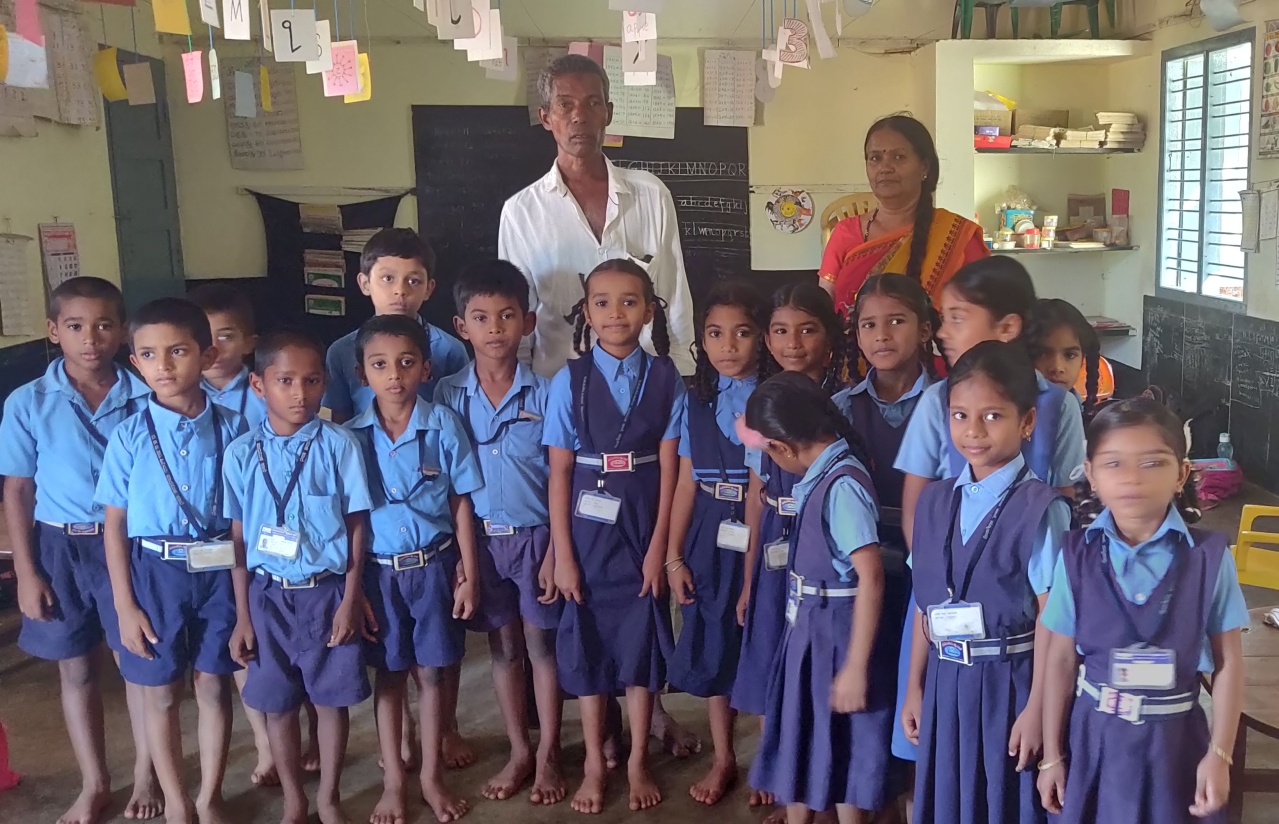 “When my wife fell ill and was in the hospital for months, there was a doctor who treated her. I had no money then, for all I sold was oranges for a living. He refused to accept any money I would have to pay. When I asked him how I would ever repay this debt, Dr Keshava, I don’t know where he is now, told me: ‘Do some good to someone, some good work that you can do’ and that stayed in my mind’,” he says with moist eyes. That thought triggered in him the desire to work for the welfare of his village.

That is how his journey from an orange vendor to a Padma Shri awardee educationist began. Hajabba, who helped start a school in the local mosque initially has gone on to get a fully-functional primary school, a two-storey high school and now is making efforts to ensure children can also continue their pre-university college education there itself.

A customer once asked him something when he was out selling oranges, probably the price, he says. "But I could not reply in English," he laments. It was this incident that made him want to start a school in his village.

"No one should lose any opportunity because they have no education or can’t speak English, I felt. Which is why I decided we should also have a school in our village,” adds Hajabba.

The echo of the voices of children reciting prayers in different languages is now music to his ears. The sight of the high schoolchildren flipping through the pages of an English weekly and reading it loud and clear is his greatest award. 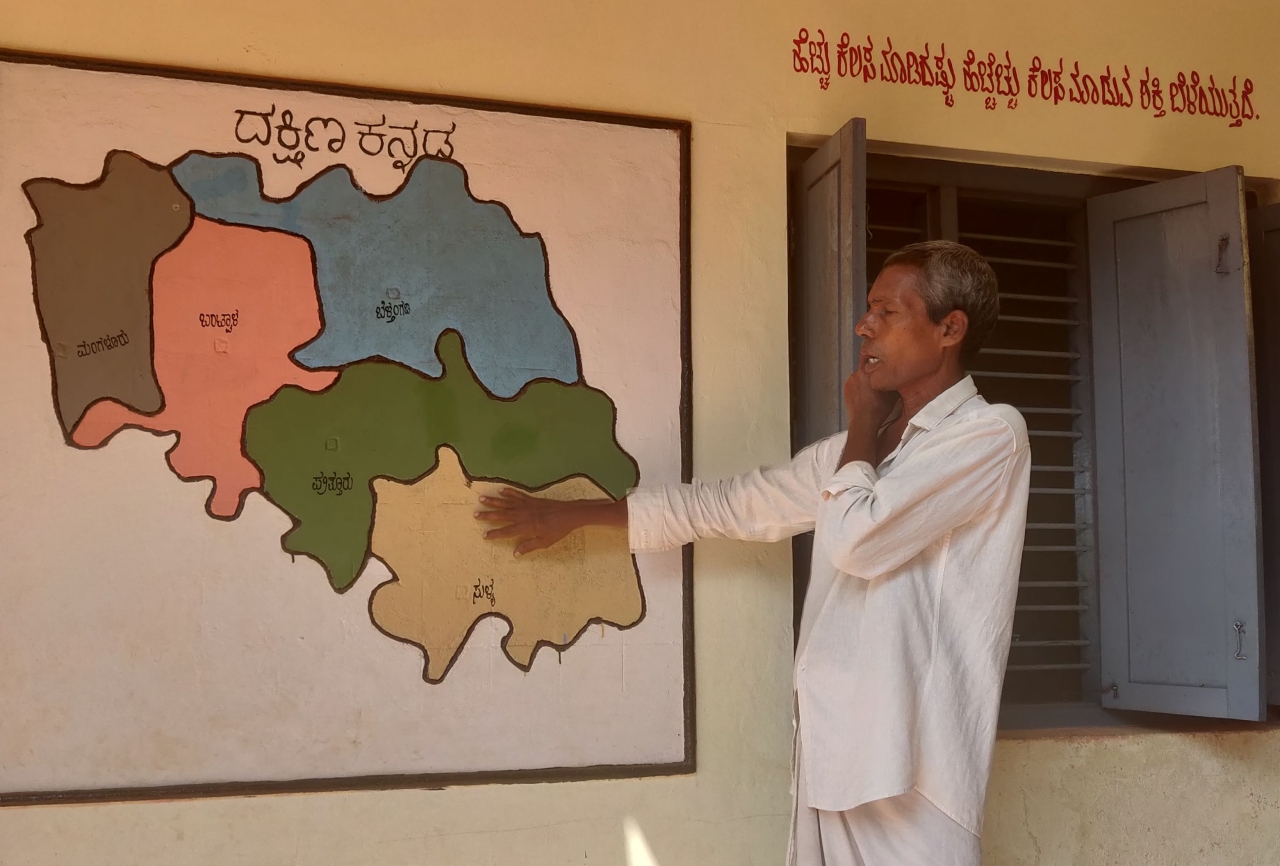 Every single cheque he received, every single person who helped him even if it was just a contribution of Rs 1,000 is etched in his mind, with the date, time and place of the meeting. His memory is photographic. His demeanour plain humbling. For he has till date not taken a single pie of what he received, be it in cash or kind.

He thanks every single donor multiple times as he takes us through every single milestone, especially the teachers who helped him realise his dream. He even rings up a teacher, Vijaya, who is now in Tumkur, asks us to talk to her, for she had been his greatest support during her tenure there.

Even the cash prizes he has received so far have been donated by him for the welfare of the school. This despite having had no means other than his orange vending to support him and his family of five.

“I am a zero. Such a person, if people are giving their hard-earned money to, it is because they trust me. Right?” he asks. “How could I then even think of using a single pie of it?” he nods in disapproval.

His wife Maimoona is an Alzheimer’s patient and is bedridden, his daughters are of marriageable age, his son is a paint labourer. But he has no complaints whatsoever. His house was built for him by a Christian association in appreciation of his contribution. His journey, he says, he owes to the journalist from Hosa Digantha Guruvppa Balepuni who first wrote about him. He was also the one who confirmed the news of the award to him.

As we end our long conversation, and he force-feeds us bananas and some musk melon juice amidst explaining the various awards, his phone rings and someone at the other end speaks in Hindi. “Talk to them and tell them I can’t speak Hindi. Can you ask them what they want?" he requests.

It is a call from the Home Ministry asking for his postal address. ‘Hajabba nimma address bekanthe (they seek)” I tell him to which he pulls out a neatly folded small newspaper pack from his pocket, sifts through a set of visiting cards (he can read none of them) pulls out one which has his name, and asks me to give them his address. His lips have been trembling, he himself edgy as his life has been completely "all over the place" since the last time "this same Hindi madam called".

As is now popular anecdote, on the morning of 25 January 2020, this man was standing in queue at the ration shop when his tiny Nokia phone rang and someone spoke in Hindi. "Hamara Hindi nai,” he told them.

“I then had to hunt for someone who would understand Hindi but no one at the ration queue knew. Finally, one auto driver, Abbas, spoke and the caller from the Home Ministry told him that I was selected for Padma Shri,” explains Hajabba.

He then called Balepuni to confirm, went down to Mangaluru and only in the evening did it fully sink in that he had indeed been conferred the Padma Shri.

But that has not changed much for Hajabba except that he has not been able to sell oranges for the past few days. 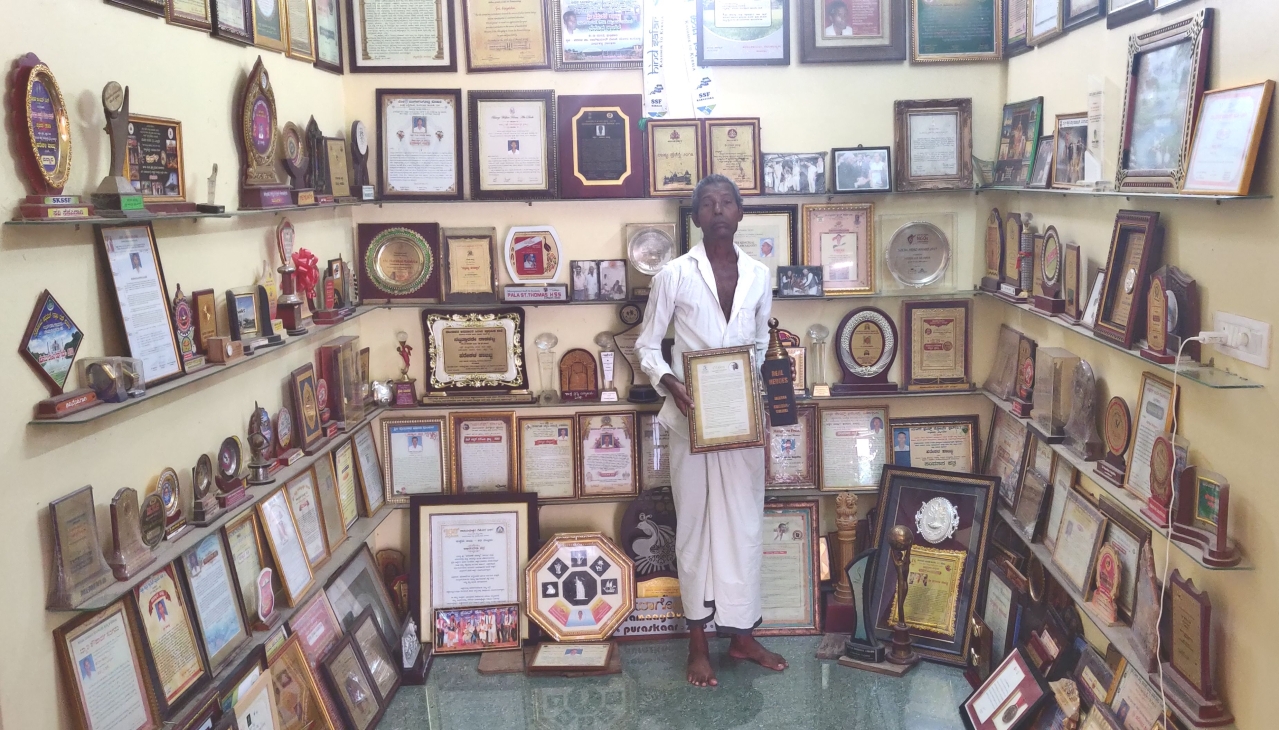 Plaques with details of donations.

He has ensured every single donation has been recorded on a plaque and although he can read none of them, knows which one exactly thanks whom and the amount of their contribution. He insists you see every single one of them, be it at the primary school that stands on a raised platform next to the high school, the mid-day meal kitchen, the flag-post or the computer room.

From the district commissioners, to the former and current leaders and philanthropists who helped him realise his dream, he forgets not one.

All the classrooms are named after freedom fighters, the large open space in front of the school has a volleyball court, there are two sets of toilets for girls and boys, the exterior walls of the primary schools have various maps displayed on them.

He cuts a phone call abruptly as the school assembly breaks into the nada geete. It was a sight to witness frail Hajabba stand in the hot sun and rest against the pillar as the National Anthem was sung. He was clearly tired, he knows not the lyrics fully, yet he stood there trying to sing some bits in respect and awe.

The stack of his awards takes up three large walls in his house. He can’t read any of them but picks each one and from memory recreates the award event for you in words.

"When I was going to the Governor’s residence to receive an award, B S Yediyurappa was deputy chief minister then and his car was moving parallel to the one in which I was seated. When he came to know about me, he asked me to travel with him (smacks his forehead gently). I was so nervous. His armed security guards and all were around and there I was sitting with him,” he blushes.

The city administration honoured Hajabba on this Republic Day. He refused their offer to have a car pick him up to attend the event. "Why should they send a vehicle? I am an ordinary man. I told them I will come by bus,” he says.

For a man ‘who is nothing’, so many honours are nothing but god’s grace, he remarks. His wrinkled skin, creased forehead, jittery self, crumpled shirt, all pale in comparison to the grandeur of his vision. Vision to see children in his village educated.