From Skirts To Militia Fatigues With Slogans In Between: How Naxal Terrorists Use Women To Hijack Cultures Of Local Communities 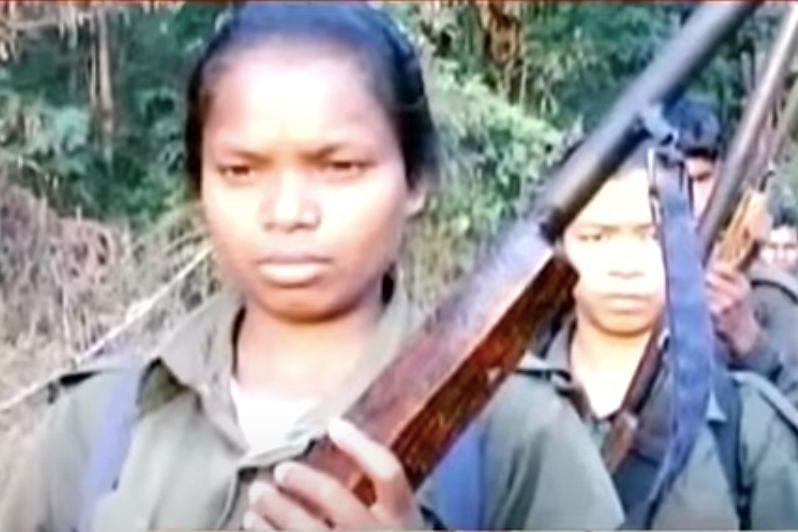 Screengrab from a report

The Dantewada-Sukma-Bijapur axis came in the news once again last week when an encounter with Maoists led to the killing of 22 security personnel. Several others (30 so far) are reported seriously injured.

The region has been known for Maoists putting up aggressive and deadly attacks against security personnel.

Reports across sections of the media say that a Maoist commander, Hidma, is the man and force behind not only this attack but several others in the recent past.

There is some element of woman power behind Hidma.

This report says that he was helped by a woman, who also happens to be a dreaded, most-wanted Maoist from Chattisgarh. She is called Sujata.

In 2019, it was reported that a 30-member all-women anti-Naxal commando unit had been deployed in the Naxal-affected areas of Bastar and Dantewada.

They were given a powerful name. Danteshwari Fighters.

Women commandos trained in Kanker, reportedly, would eventually serve in hard ops. A report points out that the women commandos in Kanker would work to help build confidence with villagers in areas where they were otherwise propelled into picking up guns against the nation, and trained to create fear.

This indicates that the Centre was making efforts towards involving gender in fighting a gruelling war made of many small and blood-smeared battles.

But maybe the Centre and state governments need to give a harder look to one aspect — cultural grooming of women in Naxal-affected areas.

The women are reportedly first misled into taking up arms, then exploited by male Maoists, and thereafter led to the front.

A question immediately arises. Where do these battle-ready women commandos come from?

As it turns out, from the soil itself. Cultural conditioning anchored by women themselves plays a stormy role.

In 2017, the Naxalbari movement turned 50 and the occasion was marked by the rural representatives of this dreaded ideology.

These are lines from a song that runs in the background as people led by women walk and sloganeer across villages to reach a ground where they all congregate for celebrations. The song talks about taking the revolution to the villages and cities — "sheher sheher".

Women's participation in this scenario is shaping an already shaped and passed-on sub-culture.

Women are at the forefront of these celebrations. They can be seen singing, dancing, sloganeering, laughing, and celebrating.

Reports also show how region or geography is inconsequential to the movement.

- "Smeared in the blood of revolutionaries is the red flag

We shall walk ahead, fighting, with the red flag held high."

The song is a worthy reminder of the crudeness of the slogans, nowhere as poetic and intense as the couplets above.

- "You shall come to your senses when the red flag flutters."

This slogan is raised by students united "in-principle" under the red flag during elections in a university.

In the 1960s and 1970s, the CPI-M used workers, labourers and peasants to power its "socialist revolution". Students sculpted it with words, posters and poetry. Women gave it face.

How does it pan out in the Naxal-affected areas? Well, just about the same way.

Women give the voice to the narrative. They play the buddhijeevis (which they visibly are), they take plump roles in natya performances, they even dress up as men where required.

Notice how the tail slogan is in a language that is sort of convenient — it can be understood and acquired by those who do not necessarily speak it. It takes the form of cultural material that's passed around as "official".

"We shall walk ahead shoulder to shoulder", the women sing.

There is another video where the International Women's Day is being celebrated in a Naxal-affected area.

Some videos of the congregations indicate that the mention of the Central Reserve Police Force (CRPF) and its elite COBRA unit are part of the persistent conditioning of the rural folk in some areas by organisations aligning with the left or left extremism.

School-going girls tucked away in the safe realms of rural and urban India have been switched over to the modest salwar kameez (even in some top schools of posh corners of Indian cities and the national capital) from skirts and tops. One video shows that girls in the heart of Bastar seem naturally comfortable in wearing skirts and tops.

This is a fascinating cultural indicator of how gender participation is shaped in the heart of India, where guns and weapons are mercilessly aimed at India's security personnel and girls and women are valued participants in that battle.

When these very girls grow older, they'd shift to the sari with the striking red border or even to jungle warfare fatigues and lauded for being "as fit as the men".

The cultural delinking of Adivasi life and Adivasi culture with the Naxal movement must begin at once and be sustained.

The unnamed battle against the Maoists is military, but the war is cultural.