Gender, Caste, And Sanskrit: There’s Space For A Multitude Of Views, And None Need Prevail 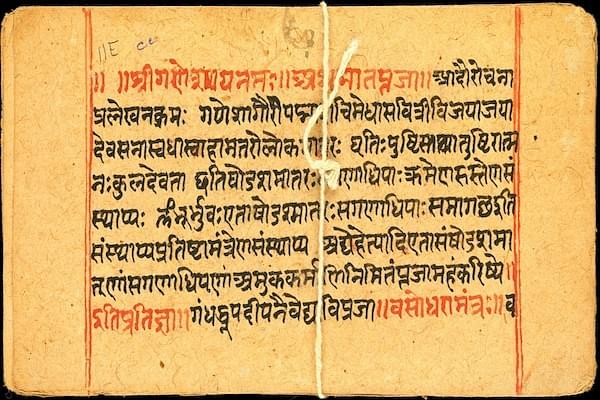 The seventeenth World Sanskrit Conference met in Vancouver from 9-13 July earlier this year. More than 600 scholars from the world over attended the conference, one of whose plenary sessions was devoted to considerations of gender and caste. It was attended by about a hundred delegates. At this session, three Indian women shared their experiences of learning Sanskrit in India in a largely male dominated environment.

The three distinguished scholars were Dr Kaushal Panwar, Dr Ananya Vajpeyi and Dr Mandakranta Bose. Their experiences had a touch of grievance, as a result of which the discussions that followed the presentations broadened out into a discussion of caste and gender issues in Sanskrit. The hint seemed to be that their experience of oppression was symbolic of the oppressive nature of the Sanskrit language and literature in general.

The debate generated by the session has outlasted it and has spilled over into publications in the mainstream press as well as social media. I was present on the occasion and have been asked to share my experience of it in view of the growing exchanges around it, in which one party is alleging that the audience intimidated them, and the other party feels that such a description almost amounts to fake news, with overtones of a contrived victimhood. Questions about the appropriateness or otherwise of the session at an academic conference, which seemed to have a political edge to it, have also been raised, as also of the one-sided nature of the panel. The motives of those who organised such a session have also been questioned.

I share below my recollection of the event and reflections on the issues raised above.

The meeting took place in a fairly large hall and I was seated somewhat in the rear but the acoustics were reasonably good and I could hear the exchanges fairly clearly. I did not witness anything that could be construed as intimidation by either the panellists or the audience. I did witness quite a bit of animation in the course of the exchanges on both sides but without any hint of intimidation. I did not find it surprising that issues which have been in contention for a long time, and which have given rise to positions people are passionate about, should generate excitement, but at no point did I feel that a Laksmana-rekha (or the invisible line between vigour and violence, verbal or otherwise) had been crossed.

We need to distinguish here between analysis, advocacy, and propaganda. I doubt if any academic would approve of propaganda, but academics could hold different views on whether they should venture beyond analysis into advocacy. I respect the views of those who are wary of doing so, people whom some might wish to describe as academic purists, but I am not averse to the prospect of academic analysis ‘progressing’ to well-reasoned advocacy. The feminist movement in American academia is a good example of this and what can be accomplished in this way. I was interested in the session for this reason, that it might emulate that example.

The readers may wish to judge for themselves whether my optimism was justified on the basis of the following two examples of my interaction with the panellists.

My first interaction was with Mandakranta Bose when the issue of the banishment of Sita by Rama came up in the course of the remarks being made by her. I tried to point out that the moral issue here may not be one of misogyny but something else, namely, how to act when one faces a choice between private virtue and public good. Rama could have been a good husband and sided with Sita. (One is reminded here of an incident in the life of Prophet Muhammad involving Aisha.

She was escorted at night alone by a young Arab who found her stranded in the desert, which caused a scandal. The Prophet sided with Aisha). If Rama had sided with Sita, it would have been an example of upholding private virtue as a husband. But Rama also had to consider his role as an ideal king, whose wife should be above suspicion. He chose to banish her, at the cost of great personal suffering. I was interested to hear that Mandakranta Bose had already thought along these lines. Some might be inclined to feel that the issue involved here is obsolete and no longer relevant in modern life. Allow me then to share the following episode. About three years ago, I met my physician for a regular check-up. After he had examined me, he said to me: “Dr Sharma, I want your advice on something since you are in religious studies. I have to decide whether I should leave the funds I have to my nephews or use them to institute a medical scholarship”.

I told him that one hesitates to offer any advice on so personal a matter but Hindu ethics seems to lean towards the view that one should prefer public good over private virtue if one can. He gave me a double take and then said: “You have solved my problem”. A few months later, I saw his picture in the McGill [University] News commending his donation.

My interaction with Ananya Vajpeyi involved the Purusha Sukta, which was much discussed by the panel and great stress was laid on it as the charter of human inequality. When I felt that the Purusha Sukta was being made to carry more hermeneutical weight than it can bear, I began by pointing out that the word varna does not appear in the Purusha Sukta but soon moved on to a more substantial point. It was being claimed, as it were, that whichever way we look at it, the Purusha Sukta casts caste divisions in stone: if we look at the four varnas as emerging along with the earth and sky, then these divisions were a natural fact, and if we look upon them as emerging from a divine being, then the divisions constituted divine phenomenon. The Manusmrti was then also invoked in support of the doctrine of the immutability of the varnas.

In response to this, Kaushal Panwar said: ‘I do not get the point’. I think I saw Ananya Vajpeyi discussing the point with the other speakers. This is the last image, I have of the exchange.

The intervention had failed to elicit a response.

I mention both these exchanges as examples of how all could benefit from such events. I did not know earlier that both Mandakranta Bose and I had somewhat convergent views about Rama’s banishment of Sita. And I did not know, until I heard it from Ananya Vajpeyi, in the course of the discussion, that Dr Ambedkar had imagined the image of the Purusha as laid out flat on earth, as a sacrificial victim, which negates the hierarchy of the varnas; they could only be identified as high and low if the Purusha was standing upright. If such benefits are to be lasting, however, then advocacy must not be allowed to shade into propaganda for any particular position.

Such events require balanced participation if we are to benefit from them. The session was billed as a window to ‘our Sanskrit’ (asmat-sanskrtam). If the Sanskrit is going to be ‘ours’, it cannot be restricted to the testimony of those who have only had negative experiences in relation to it, or to those who choose to highlight only the negative dimension of their experience of it. To do so would be to become unjust in the pursuit of justice.

Dr Shivani of Bangalore attested to her positive experiences as she pursued her Sanskrit studies, untrammelled by caste and gender considerations. Dr Viyaya Ramaswami of Jawaharlal Nehru University has spoken to me about how empowered she had felt while studying Sanskrit. The TV series called Sanskrit Vartavali has regularly featured Western women, even from Sweden and Mexico, who have cultivated Sanskrit on their own initiative in an Indian milieu at the grassroots level without apparently experiencing any discrimination.

The suggestion that a panel should have been even-handed does not mean that the experience of those who had negative experiences can or should be ignored. Discrimination cannot be considered to be have been dealt with if we can balance the scale of negative versus positive experiences; any morally decent position must advocate zero tolerance of discrimination. Biography is not history, to claim otherwise would be too narrow a formulation but although a generalisation is based on individuals (or individual items), no individual may be subsumed in the general.

The point is rather a different and deeper one. If the unfiltered accounts of the panellists were to be entertained as reflecting the true state of affairs then it would mean that the Hindu world is an ineluctably regressive one. This is a questionable position to suggest about a tradition, which is almost universally considered to be a plural tradition, which by definition means that it will harbour many possible positions on a subject. And this intuition is borne out by the evidence which it will be tedious or perhaps even redundant to recount here.

The point cuts even deeper. If any tradition is projected as hopelessly regressive, then the inevitable conclusion one comes to is that the tradition is incapable of regenerating itself. And as it cannot save itself, it must be saved by others. It is this unacknowledged implication of the optics of the panel which, it seems to me, lies at the root of the discomfort around it because most of those present had greater confidence in their culture’s ability to remedy its deficiencies on its own. Every tradition possesses a quality which exceeds its contents.

Arvind Sharma is the Birks Professor of Comparative Religion at the School of Religious Studies at McGill University.