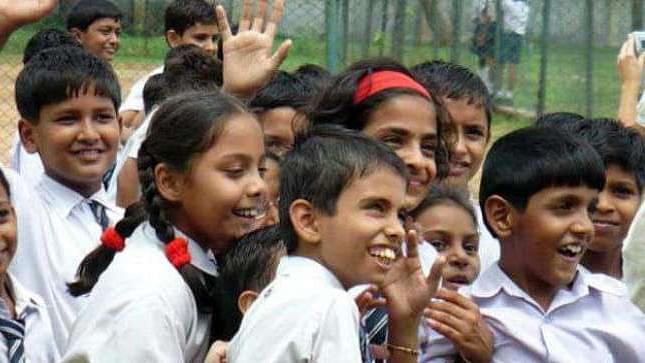 Most Indian homes and corridors of power are essentially a colossal boys’ club that has to be weaned off its misogynist tendencies, before anything close to gender parity can be achieved.

So where do we start?

In elementary schools, said Swathy Rohit, who runs a pilot project called Think Equal, a not-for-profit international organisation that is working to build a holistic education system to “support a new generation of global citizens”.

In a country where the culture is largely predisposed to patriarchy, there is a lot of work waiting to be done to bring about an attitudinal shift – beyond fantastical legislation and lip service, she said.

“And we have to catch them young to bring about this change,” said Swathy Rohit, who shaken by the Nirbhaya rape horror back in 2012, was driven to striking at the root of the problem by reorienting people towards building an egalitarian system. While respecting the natural abilities of men and women, they should also be open to shattering the stereotypical ‘pink is for girls’ and ‘blue is for boys’ perception, she said.

“I was convinced that gender sensitisation is the long-term solution and conditioning minds for gender parity as early as possible is going to determine the success of this ambitious exercise,” said Rohit, who is the chief business officer of Coimbatore-based S N R Sons Charitable Trust that runs 15 institutions and hospitals, and has helped introduce the Think Equal project in 2017, arguably a first for India, in the primary segment of 59 government schools in Coimbatore.

Engaging the government in such a challenging task is key to bringing about this change, said Rohit, even as a bill for 33 per cent reservation for women in lawmaking bodies has lapsed in a country where preference for sons is an obsession, where media debates, analysis and articles, political rebuttals and feminist hyperbole submerge the horrendous torrent of rising sexual crimes against women.

Charity begins at home, “and so does gender sensitisation”, Rohit said. A father as much as a mother plays an important role in grooming a good child (read son in most of the cases) for society, but ordinarily the parents themselves need to be shaken out of the stereotypical belief that men belong to the privileged sex.

“Think Equal is a structured exercise formulated by Yale Centre for Emotional Intelligence that aims to open up the minds of young children to the idea of inclusivity and equality,” said Rohit, of an initiative that has Aristotle’s thought as its core principle – “Give me a child until he is 7 and I will show you the man”.

The project, which is aiming at a pan-India expansion, targets government schools as they are the most “in need of help in the form of material and trained manpower to take the ‘think equal’ message to young minds”.

The material acquired from the United Kingdom-based Think Equal organisation has been converted into viable tool kits and, importantly, adapted to Indian culture and conditions and to suit issues peculiar to the country, said Rohit.

“In fact, experts are vetting the material to make it more Indian in content, and we are also getting them translated in Tamil and Indianising the characters in the story, so that the children and teachers can relate to the messages, and we can together generate a better outcome.”

Illustrated books and stationery are part of the paraphernalia that are distributed to teachers who are specially trained in the methodologies and equipped with the skill to mould young minds into accommodating the idea of equality till it becomes second nature.

“A young child treats everyone equal, as that’s in its nature. So Think Equal fortifies this disposition, and encourages them to be tolerant as they step into a bigger world as adults,” said Kalai Rajkumar, a government school teacher in Coimbatore, and who is part of the initiative.

The modules feature puppetry and skits to make it more palatable to the curious, young minds, she said.

“We strongly recommend the Think Equal programme be made available to even Class V students as that is the age when they begin to understand physiological differences,” said teacher, P Mehala, a government school teacher and a member of the Think Equal team.

“Though gender equality may be incomprehensible to children under six years of age, we help them understand how natural it is to be different when it comes to appearances, choice of food, abilities, and work, and why it has to be accepted and accommodated.”

“When they grow up, what is ingrained in their minds is equality – in every sense.”

According to Mehala, teasing each other about complexion and ‘status’ has reduced, thanks to the programme. “We have seen children taking it in their stride when teased about his/her complexion, as now they know that being different is not a mistake, but not accepting it, is.”

As the children thumb through stories titled ‘It’s okay to be different’ and ‘Giraffes can’t dance’, there is a growing sense of hope that things will change for the better.

Character building is a huge responsibility, but just how much time and expertise are invested in that is anyone’s guess. It’s common knowledge that this void is still waiting to be filled by two important stakeholders of early childhood – the parent and teacher.

The school’s role was limited to ‘teaching’ moral science, now renamed value education. This subject has, over the years, been sparingly taught to schoolchildren – mostly a weekly affair – and strictly kept outside the scope of weighted average marks, which are reserved for ‘winning’ college admissions and later, jobs.

And so it has, with the Justice Verma Committee recommending introduction of sex education in formal curriculum. The committee said children "should be able to access informed, non-prejudiced sources in sexuality rather than misinformation through internet or misleading advertising”.

Though carefully devised gender sensitisation programmes and workshops have been recently integrated into the Central Board of Secondary Education curriculum, Rohit said that since our educational system is always in a haste, instilling values must not become a cosmetic exercise. “The children should be sensitised in all earnestness”, otherwise we will end up with yet another ‘subject’ to be ‘taught’ and ‘completed’ within a timeframe,” she said.

An exemplar in this area are the Japanese schools, which are exam-free and devoted to character building in the first 10 years of a child’s school life, but this has not stopped it from making it to the list of top performing education systems in the conventional sense, if you like it. This may appear ridiculously alien to India’s education system that’s in a hurry to thrust a pencil into the stubby palms of a child to master motor movement, rather than imparting values.

What Bill Gates said cannot be truer: “The first 5 years have so much to do with how the next 80 turn out… Focusing on our youngest children is one of the smartest investments we can make in the future.”

“Unless there is a positive shift in the mental make-up, no form of discrimination can be done away with,” said Swathy Rohit.

“For this gender sensitisation must be made part of the curriculum with a view to reorient deviant sexual behaviour.”

Despite inheriting a wealth of sanskar, India is still battling a myriad discrimination, especially gender disparity. While treatment of women as second class citizens may be a universal phenomenon in varying degrees, India, especially, has to take the responsibility of building a level playing field seriously as, one, it is personified as ‘Mother’ (Mother India), and, two, it is the land of Vedic civilisation, where women enjoyed high standing.

Ironically, Indian woman’s status today has come crashing down to settle at an inglorious position. The ugly truth is the dwindling sense of personal security women have to grapple with, and face knee-jerk, sometimes insensitive, reactions of ‘leaders’ and society to several incidents of horrific sexual abuse.

For this, we have to make room for progressiveness in a preposterous education system packaged for just career building, and this must begin as early as possible.