Hijacked By Elites: Why Is The Indian LGTBQ Movement Fighting A Mythical Enemy? 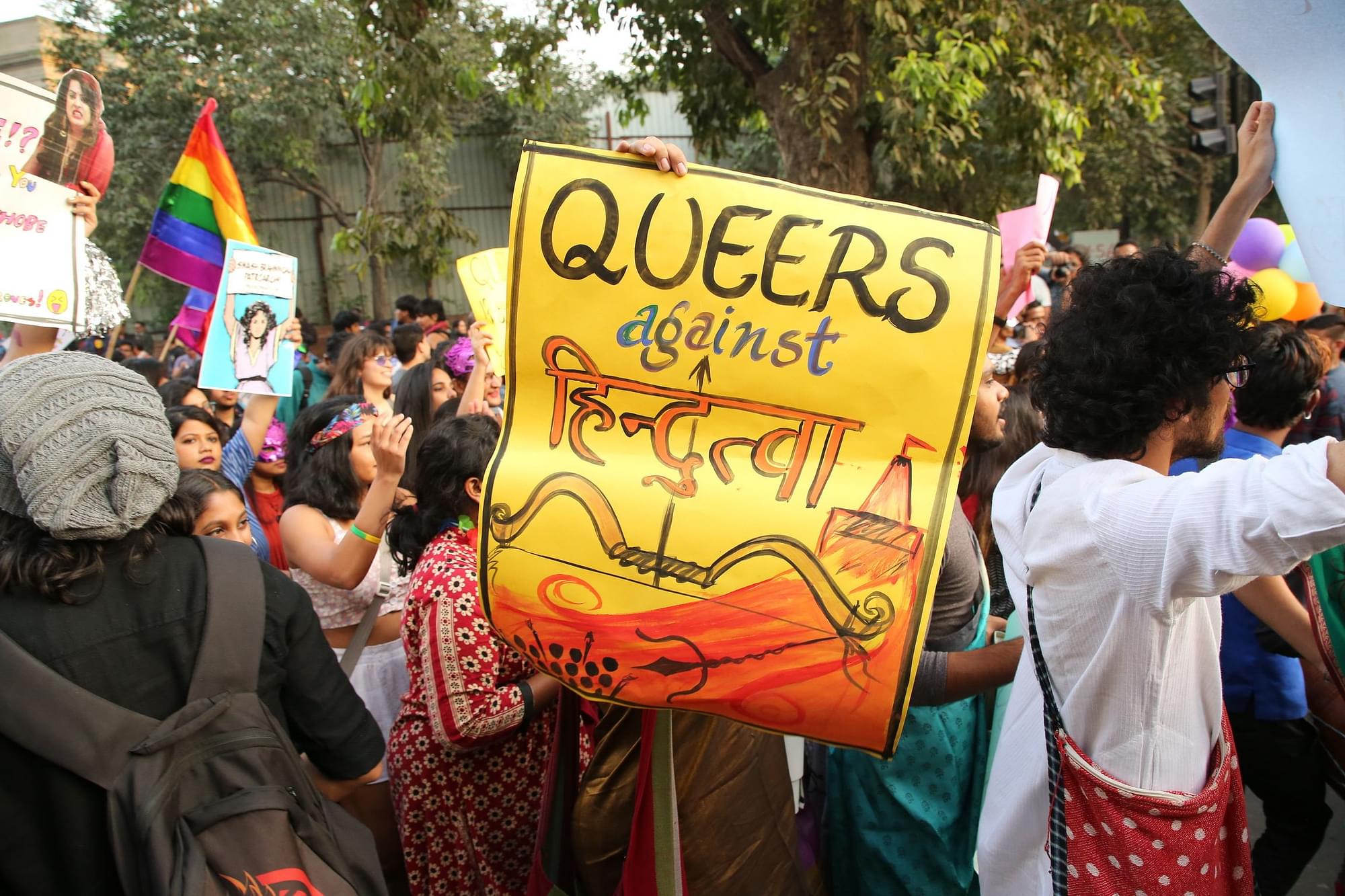 Since time immemorial, the political left, masters of institutional think worldwide, have mastered the art of scoring political points and taking pot-shots at their ideological opponents under the guise of civil rights causes. The American history of various rights movements for the last seven decades is replete with examples of the American left using the popular sympathy for these causes to pin their opponents down. At the Delhi Pride Parade, presumably a march of LGBTQ activists, the Indian left tried to take a leaf out of their Western counterpart’s book. The political mileage out of this issue apart, the implications of a rights march waving banner denouncing temples and referring to the millions of Rastriya Swayamsevak Sangh (RSS) workers as goons, remain worrisome for the ordinary gay people of India. Perhaps it is the time the masses among LGBTQ protest the political appropriation of their voices for political gains. For opening a front against the Bharatiya Janata Party-RSS dominated right wing (more on this term later) is at best an unnecessary distraction, and at worst an ill-thought strategy likely to cost the movement invaluable popular support.

You would have to be indoctrinated to the level of being brainwashed in order to believe the rhetoric about sanghi goons stopping LGBT love or temples being the enemies of gay pride. As I argued elsewhere, one of the reasons why the Indian right has no business opposing the broader gay rights movement is that unlike a few doctrinaire religions, Hinduism doesn’t have a concept of a single book or set of commands, a sort of ‘dos and dont’s’ for everyone to follow. Even the reactions to demand to scrap the unjust section 377 reflected the broader inclusiveness of the Hindu society.

Sarsanghchalak Shri Mohan Bhagwat stated that the LGBT people were very much part of the Indian society. Last year, at the India Foundation’s India Ideas Conclave in Goa, Laxmi Narayan Tripathi, a transgender activist was honoured with the prestigious Sree Narayana Guru award by Swarajya. At the government level too, the National Democratic Alliance government played their part in abolition of Section 377 by submitting an affidavit which said that the centre had no objection to the court deciding upon the validity of section 377. Thus, the case of the RSS or Indian right being the enemy number one of gay rights in India is non-existent.

On the other hand, organisations like Apostolic Church Alliance and All India Muslim Personal Law Board had filed appeals against abolition of Section 377. The Church worldwide has been one of the most vocal opponents of gay rights and more than a few countries under Islamic rule still have death penalty for gay people. Even a neutral observer will be tempted to ask, why, in such a case, there were no banners opposing the Church or the Islamic doctrine.

While creating rhetoric, the Indian left has often demonstrated a lack of originality and have often resorted to merely finding Indian substitutes for Western phrases. Due to the fundamental differences among the respective societies, such substitution attempts have often resulted in similes and analogies that have no rational basis. The recent row over Twitter boss Jack Dorsey’s misadventure with left activists demonstrated the ridiculousness of trying to substitute White supremacy with ‘Brahminical Patriarchy’. Now, as the Delhi Pride Parade has shown, this attempt to simply replace American Right with Indian Right is likely to be an even bigger disaster due to the fundamental difference in the respective constructs of the two.

Many thinkers have often pointed out the limited application of the terms ‘right’ and ‘left’ in the context of the Indian discourse. Nowhere is the folly of using such a binary more apparent than in case of the gay rights. The American Right which mainly consists of conservative Christians, have been the traditional opponents of gay rights due to Christianity’s stance on same sex relationships. Due to this large voter base, for a very long time politicians have avoided supporting gay rights unequivocally. Even someone as liberal as former president Barack Obama during his 2008 campaign had said that he believed that marriage is the union between a man and a woman.

Now, Indian Right, such as it is, chiefly consists of Hindus, who do not actively oppose gay rights since the lack of one book-one set of rules nature in their religion. And as the larger supporter base isn’t actively hostile to the gay rights, this issue doesn’t really track for most politicians. On the other hand, since Evangelical organisation-funded conversion efforts are a big concern for Indian Hindus, a large majority of them find themselves on the opposite side from the conservative American Right. The evangelical organisations in India, for their part, have been equally vocal about their opposition to the Indian right wing and their main party, i.e. the BJP. Therefore, a simple substitution from America to India will not work as ideologically these two differ substantially.

If anything, this attack might drive many LGBTQ supporting straight people away from the movement if these people perceive a regressive left political-electoral agenda being propagated under the guise of gay rights. As activist Ashok Row Kavi put it on one of his Facebook posts, the Mumbai organising committee for Pride Marches discourages political sloganeering because it might end up as a shouting match instead of a pride parade.

I have been one of the most vociferous supporter of gay rights, but am I willing to allow the left to use this movement to fire from their shoulders at people like me? Thank you, but no thank you.

As journalist Abhijit Iyer Mitra put it so eloquently here- “the gay rights movement, largely owing to the malaise of intersectionality, gets clubbed with a bunch of issues where the society is much more polarized. In search of mythical allies in the fight against a mythical enemy, they have instigated opposition across the board by making common cause with the same people that approve of throwing gay people off roofs or hanging them from cranes, against a dispensation that, while not sympathetic to them, is horrified at the thought of violence carried out against the community.”

Why does the movement then insist on, as Abhijit puts it, making common cause with people that approve of throwing gay people off roof elsewhere in the world? While intersectionality might be part of it, I think part of it can only be explained by the class schism that exists within the LGBTQ movement itself.

People often conflate gay rights activists with the larger gay community, just as under the influence of popular culture, they also think of gay people as flamboyant, social, showman type. It is a common mistake to assume the leadership or the face of the movement to be entirely representative of its constituents. Just as the interests of the politician representing a constituency and that of his constituents are almost never matched, I am afraid the same applies here too. In terms of acceptance from the society and emancipation itself, these activists represent what would amount to the creamy layer of the movement. Often their interests will be served by the spotlight of an ongoing social or legal battle. Can the same be said about the ordinary gay man or woman quietly going about their daily lives and hoping for a broader acceptance of their orientation from the society?

And that is the reason, I think it is the time for the masses among the LGBTQ movement to speak up. They need to come forward and stop this clubbing of their issues with other issues where the society is already sharply divided. And if those with platform and access to public discourse keep diluting the movement with other political issues, especially ones linked to electoral politics, I think the masses need to distance themselves from such movement very publicly, just as I had advocated the cultural right to distance itself from the mindless opponents of gay rights within the Hindus. Gay rights movement has a long way to go in India and the focus needs to be on expanding the tent and working on a common minimum agenda. The movement is far likelier to garner popular support if it stays true to its core cause and not allow political chutzpah to dilute it.