Hindu Bhakti Movement And Its Influence On The Indian Freedom Struggle 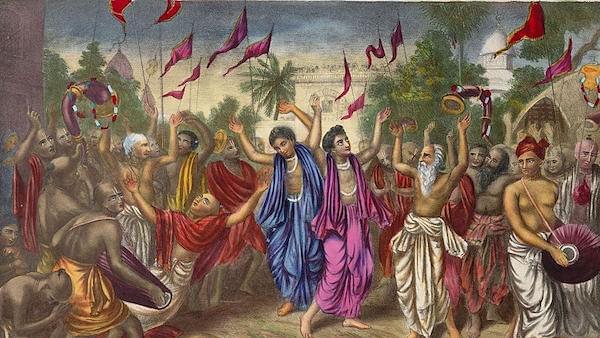 There are two contending views of the Indian Bhakti movement.

One is the traditional Indian view that ties India’s spiritual and social movements together. Driven away from the academic citadels, this view of history today lives only in the memory of Indian people and their culture.

The other view is that spiritual experience is of no social value but a mere pathology of the psyche which is shaped by historical processes. This is the Marxist view, which has become the establishment view in India.

A classic instance of the Marxist view is presented in A History of India (Penguin 1966), authored by Professor and eminent historian Romila Thapar.

Hindu ascetic tradition by and large is presented in Thapar’s book as a means of escape from the “insecurity and uncertainty” of village economies. Even the few ascetics who return to village life were found by the Brahmin community to be a threat to their position. The Brahmins, therefore, invented Vanaprastha, which relegated ascetic life to the end of a man’s life.

The later-day Bhakti movements continued the legacy of this escapism apparently embedded in the asceticism of Vedic society.

The book starts with the example of Chaitanya, “a Bengali school teacher” who experienced “hysterical trance” and started preaching “the cult of Radha and Krishna.” He was concerned “almost solely with bringing Vaishnava teaching to as many people as possible, and he was motivated by purely religious feelings.” Another group in the same category “retreated in their devotion” and tried “self-abnegation in an attempt to discover God.” Saints like Mirabai, Surdas and Lalla are said to belong to this category.

Yet, the Bhakti movement had an undeniable social impact that cannot be wished away even by Marxist historiography. How do we explain that?

Thapar writes that the movements “who were to make a deeper impact on social rather than purely religious ideas, were those who had been influenced by Islam, and more particularly by the teachings of the Sufis.”

She says the Sufis opposed the Ulema - scholars of Muslim religion and law - because they thought the Ulema deviated from “the original democratic and egalitarian principles of the Quran”:

The Islamic stress on equality was respected by the Sufis … and this brought the mystic orders into contact with the artisans and cultivators’ and at times even reflected ‘the rationalist forces, since their mysticism was not in every case religious escapism.

Thapar also writes that the mystic and poet, Kabir and the saint and founder of Sikhism, Guru Nanak belonged to that category of the Bhakti movement which was influenced by Islam, and later went on to create their ‘new’ religious movements.

So the Hindu Bhakti schools by themselves were “self-abnegating,” “retreating” from the world and “motivated by purely religious feelings,” essentially tracing their origin to experiences like ‘hysterical trance’. They made no deeper impact on social ideas, Thapar claims.

The Sufism, on the other hand, was rooted in “democratic and egalitarian principles” and which even created leaders for peasants and reflected rationalism, as their mysticism was not always ‘religious escapism’.

This stereotyping of the Indic tradition as escapist and Islamic as egalitarian can be traced back to the Marxist-Colonial bias for Islamic monotheism as inherently superior to the perceived Hindu ‘polytheism’.

MN Roy, one of the founding fathers of the Marxist movement in India, had expressed his belief of the superiority of the monotheistic Islam over polytheistic Hinduism.

A closer look at historical facts falsifies Marxist historiography on this matter.

First, the Bhakti monks of North India have consistently claimed their origin to be the Ramanuja-Ramananda tradition. One of the early figures of colonial Indology, Francis Buchanan, records the tradition of associating Ramananda, a monk from South India in the lineage of Ramanuja, to the North Indian Bhakti monks.

Ramanuja tradition, in turn, can be traced back to the tradition of Azhwars – the mystic devotees of Vishnu who saw themselves as presenting the essence of Vedic tradition. The hymns and everyday lives of Azhwars express devotion for the personal Deity and a voice for social emancipation based on spiritual oneness. Centuries before the arrival of Islam, either through trade or invasions, Azhwars had raised their voice against social stagnation. Their voice evolved into a full-blown Vedantic philosophy and a people’s movement, thanks to Sri Ramanuja, and was later taken to North India by Ramananda. Traditionally, Kabir is placed within this Ramananda tradition.

Even Chaitanya, whom Romila Thapar categorises as being ‘purely religious’, had performed acts which would be considered ‘radical’ for his times (or even today). His highly venerated disciples included Rupa, Sanatana and Jiva, all of whom were marginalised either as untouchables or stigmatised in society. They went on to become highly venerated theorists and Acharyas. Marxist historiography fails to grasp this socio-cultural Indic reality.

Contrary to claims, Sufis were not ‘progressive’ as a whole. During the Islamic rule in North India, many Sufis became power centres and aligned themselves with the rulers. They also advocated a tough stand against the Hindus.

For instance, Mir Muhammad (1372 CE-1489 CE) arrived in Kashmir and influenced Sultan Sikander to impose jizya, a yearly tax that Islamic rulers imposed on non-Muslims, for the first time in Kashmir. He prevented Hindus from applying a tilak on their foreheads. He also catalysed the destruction of the Hindu temples at Pompur, Mortand, Vijabror, Anantnag and Baramulla.

Shaikh Muzaffar (circa 1400 CE), another prominent Sufi, advocated for Sultans to not give high government posts to the Hindus. Another one of the most prominent medieval Sufis, Ahmad Sirhindi (1564-1624) created the Mujaddidiyya movement for revitalising Sufism. He wrote that the Muslim government should “humiliate the Hindus mercilessly imposing on them Jizya and treating them like dogs and by the slaughtering of cows.”

Of course, Sufis were a mixed bag. Many Sufis advocated Hindu-Muslim syncretism. Sufi saint Mia Abdullah of Ajodhan stood against Sultan Sikandar Lodi when the latter tried to massacre Hindus assembled at Kurukshetra. There were others too, like Bule Shah, Ibrahim Ras Khan and so on.

In South India, the Islamic mystic tradition was, remarkably, nearly free of association with Islamist imperialism, and almost became a branch of Yoga-Vedanta streams.

Monks in the freedom movement

Further falsifying Marxist historiography is the fact that almost no Sufi really became the leader of any peasant movement against the medieval and late-medieval imperial rule in Delhi. Bhakti saints had always been in the foreground creating trouble for the rulers and leading artisans and peasants against them.

This view of Marxist historiography perhaps has its roots in the colonial stereotypes of the Indian monk movements. British found them dangerous and an impediment to their control over the peasants. For the colonial administrator, the peasant was necessary and the monk was dangerous. But the truth is, the peasants and monks had always organically bonded in Indian history.

Historian William Pinch points out that this association played into the dynamics of the freedom struggle as well:

Pinch points out that even before colonialism, in pre-1800s, the monks left the confines of their monasteries and “engaged themselves in society’s all-too-temporal concerns of the society” mixing with “the peasants, artisans and laborers.”

This was no post-Islamic phenomenon. It was more rooted in the Indic-Vaishnavite tradition, which, even in the pre-Ramanuja, Azhwar period, associated itself with venerated Vishnu devotees from all sections of the society. Ramananda brought the Ramanuja tradition to North India.

In the early 1600s, scholar-devotee Nabhadas (a saint belonging to the tradition of Ramananda) listed in the Bhaktamal (“the garland of devotees”: short accounts of more than two-hundred Bhaktas) not only Brahmins and Kshatriyas or males but also women, weavers, cobblers, barbers and peasants as representing the first generation of Ramananda’s disciples. This allowed for an empathetic interaction between Bhakti monks and the rest of the society.

Ultimately, these peasant-monk synergetic movements led to a deep fear of Sampradaya in the mind of colonialists. Pinch writes:

Colonial administrators may not have appreciated the subtleties and importance of sampraday; they certainly feared, however, the power of sampraday loyalties to challenge even British imperial authority, and they strove therefore to dismiss the sampraday dimension of what they characterized as a political sadhu ‘problem.’

The Colonialist-Marxist fear of ‘sampraday’ still exists in the predominantly Marxist academic ivory tower and amidst English-educated Indians with their colonised mindsets. But, an Indian history with the recognition of a spiritual core influencing social movements deserves a more detailed holistic framework. India waits to hear from such historiographers from the future to understand her past.