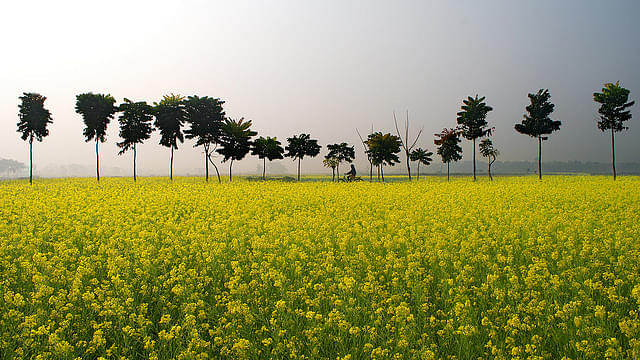 The United Nations forecasts global population to rise to more than 9 billion people by 2050. Climate change may mean that the crops we depend on now may no longer be suited to the areas where they are currently cultivated and may increasingly be threatened by droughts, floods and the spread of plant diseases due to altered weather patterns. So feeding everyone in the coming decades will be a challenge â can genetically modified crops help us achieve this?

Two groups of genetically modified crops are widely grown. The first are altered so that they are not affected by the herbicide glyphosate, which means that farmers can eliminate weeds without harming their crop. Glyphosate-resistant crops can increase farming efficiency but, while helping to get rid of weeds, herbicide resistance has no direct effect on the quantity of food produced, so their contribution to food security is likely to be limited.

The second type produce a natural insecticide inside the parts of the plant that pests eat. This protects the yields of these crops against insect infestation, which is arguably more environmentally friendly than using sprays that could be toxic to other organisms. Crops of this type are likely to be useful, but we should increase the number of insecticide genes that we employ to prevent evolution of resistant pests.

Farmers have always faced crop diseases â think of the Irish potato famine of the 19th century â and some scientists predict that climate change may allow previously contained infections to spread into new areas and become more damaging. It may already have contributed to the devastating appearance of a fungal infection called wheat blast in Bangladesh, a disease that can cause nearly complete loss of this critical crop in infected fields.

Genetic modification can certainly be used in the fight to make crops more disease resistant. Many plants are vulnerable to an infection because they cannot detect the invading organism. However, the proteins that identify an infection and activate a plantâs defences can be moved between varieties or even species using genetic modification. This will enable previously vulnerable crops to turn on resistance mechanisms.

It is also becoming possible to rewrite the genes for these gatekeeper proteins so that they work for different diseases. A powerful and rapid method for editing genes called CRISPR-Cas9 has recently been developed and it is already being harnessed to produce genetically modified crops. For example, genes that make wheat vulnerable to powdery mildew have been changed to produce a resistant variety.

Nor is gene editing limited to improving disease resistance. Tomatoes have been tweaked to be insensitive to changes in the number of hours of sunlight in a day. This causes them to produce fruit more quickly because they arenât waiting for the right time of year to start flowering.

Fundamentally, agriculture uses photosynthesis to convert light energy, water and carbon dioxide into food â so improving this process would increase how much food we produce. An obvious target is the step that captures carbon dioxide as it sometimes mistakes oxygen for carbon dioxide in a wasteful set of reactions called photorespiration.

As it happens, some plants already have a solution to this problem. They possess a system that pumps carbon dioxide into specialised parts of the leaf where most photosynthesis occurs, concentrating it there so that photorespiration doesnât happen. These species, known as C4 plants, can make more use of sunlight at higher temperatures and need less water because the pores that let carbon dioxide into their leaves donât have to open so much and therefore less water vapour escapes through them.

It has been estimated that transferring these mechanisms into other crop species such as rice could increase productivity by 50%. Unfortunately, progress towards this goal has been slow, partly because rice doesnât have the same leaf structure as C4 plants. A version of rice that can carry out a simple version of C4 photosynthesis has recently been produced but it will take at least ten years to optimise it.

Less ambitious approaches may provide benefits more quickly, such as a new type of wheat in which productivity has been increased by 15% to 20% by speeding up recycling of ribulose bisphosphate which is crucial for carbon dioxide capture.

Crops are not just being genetically modified to improve their quantity but also their nutritional quality. The most prominent of these is âgolden riceâ. Vitamin A deficiency causes 250,000 deaths per year and is common in populations whose diet is heavily dependent on rice. Golden rice is golden because it produces large quantities of yellow dietary carotenoids that our bodies can convert into vitamin A.

Other âbiofortifiedâ crops in development include potatoes with more protein and cooking bananas with increased carotenoids and iron.

Many people â and countries â are still sceptical about GM food. But people and animals have now been consuming GM crops for more than 20 years without apparent harm to their health. On the other hand, there is no question that starvation kills and that food insecurity is a major global threat. There are challenging times ahead. Can we afford to close the door on these powerful ways to protect our food supply?

_This article is part of a series by The Conversation on food security. Read other articles here.

This article was originally published on The Conversation. Read the original article.