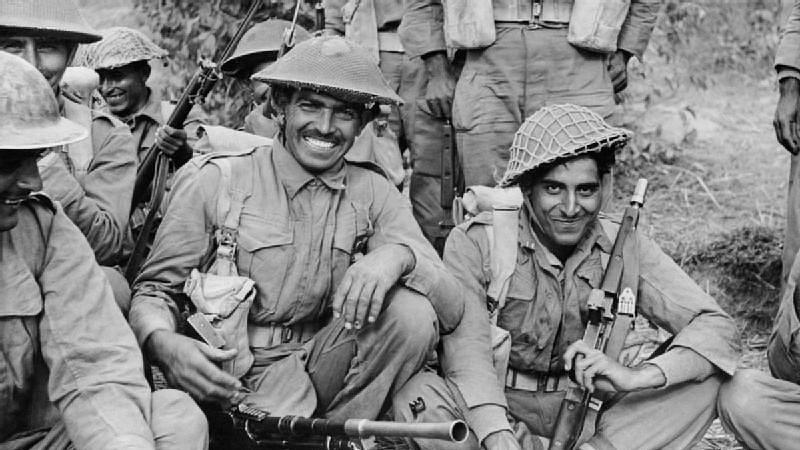 Until the First World War, Indians were not allowed to hold the King’s Commission. The best they could hope for was a Viceroy’s Commission – granted only to senior soldiers who had risen from the ranks. From 1917, however, ten places at the Royal Military Academy at Sandhurst were reserved every year for Indians. These King’s Commissioned Indian Officers (KCIOs) were carefully selected: most of them hailed from the martial classes that had fought in the war.

Following the political reforms of 1919, Indians in the new Central Legislative Assembly (CLA) began to take a keen interest in the ‘Indianization’ of the army. In response to the Esher Committee report of 1921, a set of resolutions was tabled in the CLA by P. S. Sivaswamy Aiyer, a leading liberal from Madras. These included demands for setting aside 25 per cent of the places at Sandhurst for Indian cadets and for the provision of preparatory training in India.

The commander-in-chief of India, as well as the India Office, rebuffed the resolutions, arguing that their provisions would dilute the efficacy of the Indian army and that no British officer would deign to serve under an Indian. Even a plan drawn up by the Commander-in-Chief in 1923, proposing complete Indianization in forty-two years, was swatted aside in London. The summary rejection of even so conservative a plan riled the Indians. Speaking at the next budget session of the CLA, Jinnah noted that the Indian army had 2,078 British officers. At the going rate, he asked, ‘how many centuries will it take to Indianise the Army?’ Concerned about a nationalist backlash, the viceroy, Lord Reading, protested to London. This resulted in a plan to ‘Indianize’ eight units (six infantry battalions and two cavalry regiments). Thenceforth the KCIOs would be posted only to these segregated units.

The Indians saw the establishment of a military college in India along the lines of Sandhurst as the fastest way to Indianize the officer corps. After several resolutions were tabled in the CLA, the government constituted the Indian Sandhurst Committee under the chief of the general staff. The Indian component of the committee included Jinnah and Motilal Nehru (the father of Jawaharlal). The committee proposed a large-scale increase in Indianization, including the immediate doubling of places for Indians at Sandhurst; the setting up of an Indian academy by 1933 with an intake of three hundred cadets for a three-year course; and the abolition of the eight-unit scheme in favour of unrestricted induction of Indian officers.

The government was taken aback. After being placed on ice for over a year, the report was rejected on the grounds that it had exceeded its remit. But realizing the need to mollify the Indians, the government held out minor concessions, such as increasing the number of places for Indians at Sandhurst from ten to twenty-five. The nationalists were left cold. Motilal Nehru asserted that the term Indianization was a misnomer: ‘The Army is ours; we have to officer our own Army; there is no question of Indianizing there. What we want is to get rid of the Europeanization of the Army.’ The constitutional report prepared by the Congress under his leadership in 1928 also called for accelerated Indianization.

By 1930, seventy-seven KCIOs had been commissioned into the army. So, in April 1931, the viceroy announced the extension of Indianization from eight units to a full combat division of fifteen units. An Indian Military College Committee, chaired by the commander-in-chief, submitted its report later that summer. The committee recommended the establishment of an Indian Military College, with an annual intake of sixty cadets for a three-year programme.

On passing out, they would be called Indian Commissioned Officers (ICOs). The Royal Indian Military Academy was opened in Dehradun in October 1932. But it had an annual intake of only forty cadets. Less than half of these would be selected by open competition; the remainder were reserved for VCOs and the princely states’ troops.

Through the rest of the decade, Indianization proceeded at a leisurely pace. As war clouds gathered, the CLA passed a resolution in September 1938 calling for a committee to recommend ways of increasing Indianization. The government responded by appointing one led by the chief of the general staff, Auchinleck, to examine the issue. After interviewing several KCIOs and ICOs, Auchinleck was inclined towards the Indians’ viewpoint, but before he could set down his recommendations, war broke out in Europe.

The commander-in-chief, General Robert Cassels, was prominent among the conservatives, however. In March 1940, a study commissioned by him to assess the requirements of the expanding army recommended that Indian officers should not be sent to units officered solely by the British. This would have an undesirable impact ‘not only on the efficiency of such units but might be likely to prejudice the future requirement of British officers’. Clearly, old assumptions died hard. Nor did the study recommend the Indianization of more units. It merely suggested that the Indians now being given Emergency Commissions could be absorbed in garrison and administrative units.

Cassels produced a plan that he hoped would mitigate the challenge posed by the growing number of Indian officers. His solution was to fix a high ratio of British to Indian officers in the army and plan accordingly for recruitment. Any further acceleration of Indianization, he warned the viceroy, would ‘inevitably result in ruining the Indian Army as an instrument of war’.

The upshot of this was that the average number of officers in units had dropped to desperately low levels by 1941. Only after Cassels’ departure from office and the appointment of Auchinleck as commander-in-chief did the army adopt a rational policy towards Indian officers. From January 1942, there was marked upturn in the number of Indian officers right through to the end of the war. During the same period, the ratio of British to Indian officers fell sharply.

The recruitment of officers was a two-stage process. Initially the volunteers were screened by their local Provincial Selection Board. Those who got past this were then interviewed by the Central Selection Board of the General Headquarters. Initially, the army used rather informal techniques for officer recruitment. K. V. Krishna Rao - future chief of the Indian army - was among the youngsters who made it to the second stage. There he was quizzed on general questions about the war and at greater length about his passion for cricket: ‘how a leg-break was bowled, what a late cut was, what position was known as gully and so on’. Satisfied with his replies, the chairman of the board remarked: ‘Well, Mr. Rao, I hope you will get to play plenty of cricket in the Army.’ A successful Jewish volunteer, J. F. R. ‘Jake’ Jacob, was asked in his interview in mid-1941: ‘Do you shoot games?’ Jacob replied, ‘No sir, I don’t shoot games, I shoot goals.’ There were peals of laughter round the table and no further questions.

The officers so recruited went through a five-month crash course at Dehradun or the new officer training schools at Belgaum and Mhow. By 1943, the rapid Indianization of the officer corps began to raise questions about the quality of the volunteers. This led to the adoption of a more ‘scientific’ system based on applied psychology – one that aimed at selecting men fitted by temperament and character for the duties of an officer. To attract suitable candidates, the army offered such incentives as the reservation of a percentage of appointments in government services for retired officers. Age and educational qualifications were relaxed. Propaganda was stepped up in schools and colleges. Teams of officers travelled around showing films depicting the life of an officer and interviewing potential candidates prior to the formal selection process. Yet, 50 to 65 per cent of the volunteers were weeded out by the Provincial Selection Boards. Of the rest, almost 75 per cent were rejected by the GHQ Central Selection Board.

The army, in short, was unable to attract the best talent. Most of those who signed up saw it simply as an avenue of employment. As one Indian officer cheerfully confessed, ‘Hats off to the University for granting me the degree but I think a degree of the Punjab University is not worth much.’

There were only a few officers like A. M. Bose – nephew of the distinguished scientist J. C. Bose – who joined the army because they ‘wanted to do my bit to fight the Nazis’. Why did the best men not volunteer in adequate numbers? While there may have been a variety of reasons at the individual level, collectively high school and college students were strongly drawn to the nationalist movement. As Krishna Rao recalled, ‘Whenever a great leader such as Mahatma Gandhi visited, most of the students used to cut classes and attend the public meetings, as volunteers’. Indeed, students were in most places the backbone of the Quit India revolt in 1942 and went to prison in droves. Given the political deadlock during the war, the best and brightest seem to have chosen not to volunteer.

Excerpted with permission from Penguin from India’s War: The Making of Modern South Asia, 1939-1945, authored by Srinath Raghavan.