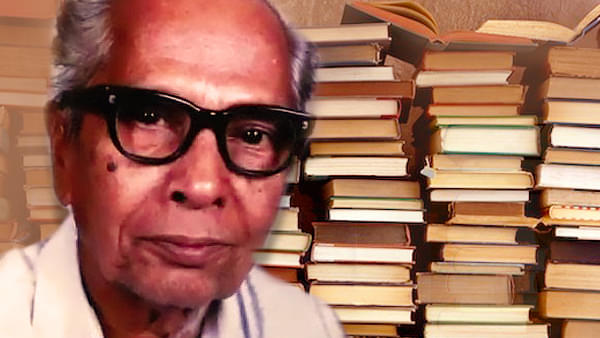 P N Panicker, Father of the Library Movement in Kerala.

Kerala’s achievements in the social sector have long been celebrated, with many proposing the “Kerala model” of development as an alternative to the “Gujarat Model”. As this author has written earlier, Kerala has no “model” to speak of. However, this does not mean that we are to dismiss the gains that Kerala has made as an anomaly. There are certainly lessons that other states can learn from the Kerala experiment.

The foremost of Kerala’s achievements that must be celebrated is the “100 per cent literacy” tag. Investments in the education sector in the primary sector have no doubt helped, but the activities and achievements of Puthuvayil Narayana Panicker, a former school teacher, should not be overlooked. It was under his leadership that a collective of libraries then functioning in the Kingdom of Travancore came together to form the “All Travancore Granthashala Sangham” or “Travancore Library Association” in 1945. The association eventually transformed into the “Kerala Granthashala Sangham” (KGS). This state-wide library movement was pivotal to increasing the reach and use of libraries and highlighting the importance of literacy, especially in rural areas. This article attempts to highlight the contribution of this selfless voluntary organisation and its tireless leader, whose contributions should not be lost to the sands of time, and should play as a pathway for other states to replicate Kerala’s successes.

Panicker led the association for more than 30 years and earned the title as the “Father of the Library Movement”. His organisation supported and opened new libraries in regions where there were none. The organisation became a centre for socio-cultural activities, and the libraries were instrumental in inculcating the habit of reading among the general public. From 1955 to 1975, the number of libraries under the KGS increased from 1,747 to 4,280. Thus, a voluntary association, formed and run by the grit and dedication of one man, laid the groundwork for a literate and informed citizenry. The organisation received little to no government support. During the organisation's initial days, Sir C P Ramasawamy Iyer, the dewan of the then Travancore Kingdom had extended support to Panicker’s efforts in a bid to initiate a public library system. These efforts however led to no end.

The KGS aimed to establish a library in every panchayat ward, with associated “clubs” for women, young adults and children. The thrust was given by the sangham to first open a self-sufficient library in its building, and then engage in community activities. This included organising discussions, debates, seminars, sporting events, as well as farmer’s clubs and radio clubs. The organisation thus had transformed itself into playing a pivotal role in the state’s political, social and cultural discourse.

In 1970, the KGS celebrated its silver jubilee and carried out sample surveys to combat illiteracy. This sample survey, though limited in scope, had some startling revelations – some wards in Trivandrum were 80 per cent illiterate. The KGS thus proposed a six-month course that was to be conducted through its 3,500 libraries to improve adult literacy. Only 20 projects were approved, that too on an experimental basis. Regardless, the organisation started literacy programmes on a voluntary basis in many libraries. These efforts mark the beginning of a concrete effort to combat illiteracy in Kerala. From this point onwards, the Kerala Granthshala Sangham was supported in its efforts by the The United Nations Educational, Scientific and Cultural Organization (UNESCO) as well as the Government of India (GOI). The KGS prepared elaborate material – including guide books, newsletters and a weekly newspaper called Sakshara Keralam or “Literate Kerala” for those who had entered the world of letters through their programme.

The activities of the KGS were quite holistic and expansive, and even if they did not receive as much attention as they should have, international honours came searching in the form of an honourable mention in the UNESCO Krupskya Award in 1975.

As is the case in a socialist state, the government of Kerala took over the operations of the KGS in 1977, and Panicker welcomed it, hoping the government takeover will bolster the efforts at literacy promotion. He even became part of the new control board that was appointed to oversee the activities of the KGS, becoming its first member secretary. But all the gains were undone when the KGS fell victim to political interference, and Panicker exited the organisation, disgusted with the petty politics. He then founded the “Kerala Association for Non-Formal Education and Development” (KANFED). As the name suggests, Panicker decided to focus his efforts towards one end – total literacy. The organisation received support from the central government, the Kerala government as well as the German Adult Education Association in the early stages to conduct its activities.

It was the activities of the KANFED that led to the declaration of Ezhome in Kannur district as the first fully literate village in the state in 1985. The association played a crucial role in the Kerala State Literacy Mission, and its volunteers were indispensable in its programme. With KANFED, Panicker wanted to continue the good work he had done with the KGS, and the organisation published 20-25 primers, nearly 20 guidebooks, handbooks and workbooks, around 50 reference books for workers, nearly 210 books for the newly literate, besides a number of pamphlets.

On 18 April 1991, Kerala was declared the first fully literate state in the country, with a literacy figure of 93.58 per cent. Panicker’s efforts reached a crescendo – his tireless efforts had borne fruit.

Recognition from the state government came only when the third Nayanar government decreed that his death anniversary, 19 June, be celebrated as “Vayana Dinam” or “Reading Day”, with 19-25 June as “Vayna Varam” or “Reading Week”, when activities to promote literacy and reading habits are conducted in educational institutions as well as libraries across the state. The postal department launched a stamp in his honour on 21 June 2004.

The work of Panicker is being carried forward by a foundation established in his name, which now organises community literacy programmes as well as e-literacy campaigns among others. Prime Minister Narendra Modi had inaugurated the foundation's reading month celebrations this year. The foundation is usually tasked by the state government to organise this event, but 2017 was an exception – the Pinarayi Vijayan government gave the task to KSLC, with the expansion of the “reading week” festivities extended to the death anniversary of I V Das, the former editor of Deshabhimani, the “party paper” of the Communist Party of India (Marxist). Das was also a member of the state committee of the party as well as a member of the KSLC. Allegations abound that this was meant to undermine the legacy of Panicker.

There is also another indication that the state government is playing hard and fast with the legacy of Panicker – the budget earmarked for the under-staffed and the under-funded KSLC is measly Rs 10 crore, while the budget finds enough leeway to establish film theatres for Rs 100 crore in the same sentence.

The efforts and dedication of thousands of volunteers and Panicker should not be forgotten when the story of Kerala’s cent per cent literacy story is told. He led the 47-member strong library association to more than 5,000-member libraries with his grit and dedication. After all, it shows that voluntary associations are capable of transformative change, in a much more effective manner than the state ever could.