How To Elevate Public Discourse In India – An Indic Perspective 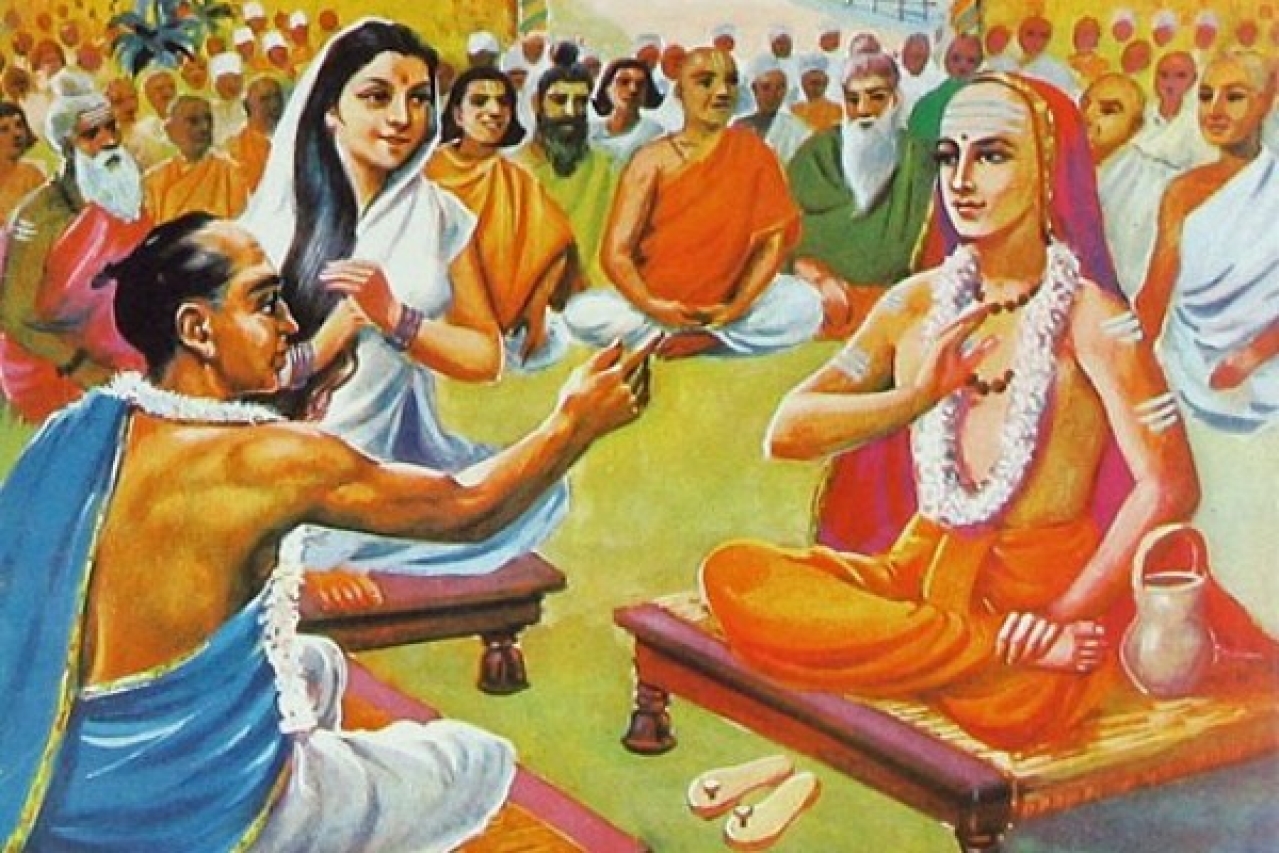 The legendary debate between Adi Shankara (R) and Mandana Mishra ... a classic example of vaada.

Every other day we find the public discourse flooded with a seemingly life-or-death issue that inevitably polarises people into opposing camps. We find ourselves caught in a swirling vortex of politically charged jargon and competing narratives that serve more to obfuscate and drive agendas than to bring clarity and depth. The discourse is marked by polarisation, bitterness, and rancour with labels like ‘fascist government’, ‘anti-national’, ‘Sanghi’, ‘pseudo-secular’ and so on being bandied about ever so casually. Needless to say, prime-time debate theatrics have brought the culture of debate and discussion to a new low. An exercise which should have paved the way for an informed and comprehensive public dialogue has, in fact, exemplified methods and tactics for a degenerated and tainted public discourse.

Interestingly, neither the phenomenon of a tainted discourse nor the tactics is a modern invention. However, in a civilisation that has had a vigorous dialectic tradition spanning millennia, quality control mechanisms were evolved to effectively address this aspect and ensure that the quality of discourse was upheld. This is seen especially in the Nyaya and Tarka traditions – which developed an entire system and process of dialogue. The Nyaya Darshana considered reasoning as the means to discern sat (real) from asat (unreal), and therefore dialogue was considered as a sacred yagna and a sadhana that could lead to moksha. It discusses in detail different forms of dialogue – samvaada, vaada, prativaada, and jalpa samvaada is a sincere conversation between the teacher and the taught. It is a dialogue that teaches and imparts knowledge.

The teacher does not prescribe and the student has the freedom to think, question, and form his conclusions. Classic examples of samvaada are the Upanishadic conversations and the Bhagavad Gita. A vaada (dialogue) is a rigorous discussion between two people who are well versed with the subject and take clear stances and defend their arguments rigorously.

Vaada is fundamentally a process of creative churn motivated by a shared quest of arriving at a deeper or more fundamental understanding of reality (sat) transcending polarised binary positions. Each person is willing to examine the arguments of the other and accept what is valid. This orientation of pursuing truth (sat) stands in sharp contrast to the aim of a debate, where the objective is victory.  An authentic vaada increases depth of knowledge, clears miscommunication, and develops mutual respect. The debate between Adi Shankara and Mandana Mishra is considered as a classic example of vaada.

The sole aim of jalpa (cavil) is to win and establish your position. There is no desire for truth. What is at stake is prestige and honour. The participants seek to win the debate by any means necessary, including unreasonable responses, shifting topics, and irrelevant rejoinders.

In a vitanda (wrangling), the participant has no stance of their own. They simply refute everything that the opponent says in a no-holds-barred fight. There is a serious attempt to undermine the opponent’s credibility using irrational arguments and misrepresentation. This is the debating equivalent of a street fight.

It is not rocket science to locate these forms in public discourse today. Increasingly in the digital media age, characterised by shorter attention spans and a tendency for instant gratification, debates on television news channels and social media today perfectly display jalpa and vitanda respectively. Whataboutery, introducing arguments which might be true but deviate from the discussion, maligning the other side and so on, leave little or perhaps no space for a healthy discussion in the public realm. We need a fundamental shift upwards to aim for samvaada and settle for nothing lesser than vaada. For a land that venerated intelligence and the illumination that vidya brings, our expectations cannot be made lower. This can be done by clearly categorising the quality of discourse on the scale from samvaad to vitanda.

Structures and processes have a tremendous effect on our cognition and the way we look at things. The way a dialogue is positioned fundamentally alters the behaviour of participants. Nyaya Darshana gives us rigorous dialectic frameworks and processes that can help us bring rigour and intellectual depth to our public discourse.

Purvapaksha is a methodology to facilitate an honest and rigorous vaada. It requires that a participant first understand the opponent’s perspective, test its merits, and only then propose their argument. Purvapaksha offers a deep understanding of all perspectives and an approach of respect. It facilitates refinement of views and enables participants to embrace shifts in thinking. Traditionally, a participant must first summarise the argument of the opponent and get his approval (purva paksha). Then, the participant critiques the shortcomings in the argument (khandana). The third stage is when the participant puts forth his stance (uttara paksha). Finally, at the end of the debate, the discussion is summarised to see where there is common ground and where there are differences (samanvaya). Nyaya requires that any statement made has to be backed by an appropriate pramana (means of knowledge). There are three commonly agreed upon means through which right knowledge can be obtained. They are: pratyaksha (direct perception), anumana (inference), and shabdapramana/aptavakya (verbal or authoritative testimony).

This provides a simple framework to deconstruct unsubstantiated, vacuous statements like “there is an atmosphere of intolerance”.  What could be the means of knowledge that backs this statement? It cannot be pratyaksha (direct perception), because individual perception cannot be sufficient to make a collective national case. It cannot be anumana (inference), because there is no reliable data source cited to make this inference. And definitely, there is no objective authoritative source like a systematic, representative rigorous study cited to back this statement. Thus, a simple question of what pramana backs the statement can help us separate the wheat of rigorous arguments from the chaff of arbitrary personal opinion. Further, there are rigorous criteria for disqualification in a vaada. They include changing stances, self-contradiction, digression, gibberish, repetition, and so on.

In the legendary debate between Adi Shankara and Mandana Mishra, the person whose garland withered first was considered to have lost the debate as it was considered evidence of losing one’s temper. To make this spirit of discourse permeate our land again, we need a fundamental shift in our approach to engaging with those who differ with us. To do this, purvapaksha-based circuits can be started across the country to encourage a constructive and rigorous approach to discussions. The spirit of purvapaksha can be infused in the media by creating prime-time debate formats that emphasise and incentivise consensus and creative churn over making one’s point. The rules of pramana and disqualifying criteria must be rigorously applied to maintain the quality of the discussion.

On social media, users can categorise discussions on a scale of samvaada to jalpa, and attempts to degrade the quality of discourse must be ruthlessly called out. Further, workshops on the fundamentals of nyaya and anvikshiki – the method of logical enquiry – can be conducted across the nation to popularise these ideas. For us to make even the smallest step towards becoming the intellectual capital of the world, the most fundamental thing that we need to work on is the quality of discourse and the rigour, openness, and reverence that we bring to our search for knowledge and wisdom.

For, sa vidya vimuktaye, or knowledge is indeed that which liberates.

Vada in Theory and Practice by Radhavallabh Tripathi

Review: Vada in Theory and Practice by Radhavallabh Tripathi