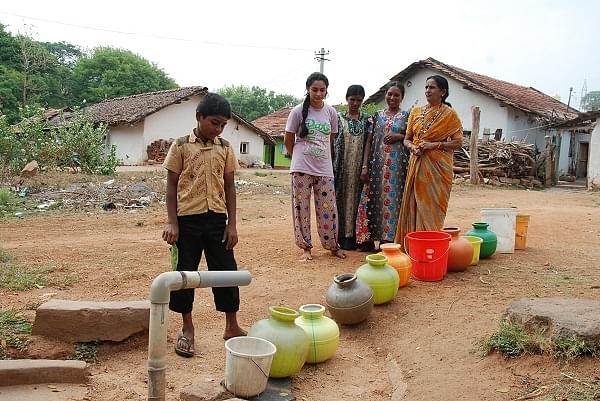 In rural India, a full pond or well is a joy to behold. It draws the community like bees to nectar. Water bodies in our villages keep communities bonded over shared resources. They spark conversations and revolutionary ideas, become meeting grounds for community events and keep rural traditions alive. But plunging groundwater levels are drying up water bodies. The Cauvery Calling team travelled the river basin and found that water scarcity is threatening the very identity of rural Karnataka.

Ever been to an ooru jatre (village fair) in Karnataka? These loud, colourful, boisterous festivals are the pride of every village – they’re usually temple fairs but there’s a bit of everything thrown in: music, dance, drama, elaborate costumes, processions, fireworks and of course, food.

The louder and bolder, the better. The entire community comes together to pull off these annual events. Guests from neighbouring villages pour in to take part in the festivities.

It’s a heady mix of sound, light and chaos. It takes months of preparation, which is in itself a chaotically exciting process because there are way too many cooks making the broth –but everyone is allowed to add their own flavour, even if it takes a fair bit of vigorous haggling to get it in.

These jatres bring a joie de vivre to the otherwise hard lives of rural communities where all resource – except human resource – is scarce.

So, one can understand the despondence of 80-year-old Chandrappa, a farmer in Dodenahalli village in Arsikere Taluk of Hassan district when he shakes his head and says softly with watery eyes, “We’re not doing the jatre this year...”

Ask him why and pat comes a counter question, “Where’s the water? When guests come from other places, don’t we have to give them water? It’s a big event – it goes on for 3 days. How will we do it if there’s no water?”

It’s all said with a resigned hopelessness tinged with a desperate hope that someone will whip out a magic wand and produce water and his jatre can go on. Then he adds as an afterthought, “Cauvery...what a river of this land she was... at one time, she was full of water...there used to be rains...”

Hassan district, in which Arsikere is located, is a biodiversity-rich region which lies partly in the Western Ghats. A beautiful, lush countryside combines with ancient architecture and history to give this erstwhile seat of power of the Hoysala dynasty its enigmatic charm.

It is home to the famed monolithic statue of Gomateshwara at Shravanabelagola and the century-old temples of Belur and Halebeed. Arsikere, however, is a semi-arid Taluk in Hassan which is hot and dry for most parts of the year and is categorised as drought-prone.

In 2017, the Central Ground Water Board of the then Ministry of Water Resources, River Development and Ganga Rejuvenation, Government of India, released a report on “Aquifer Mapping and Management Plan” for Arsikere Taluk.

As in most parts of rural Karnataka, agriculture is the main occupation in the Taluk where the rural population accounts for 83 per cent, according to the 2011 census.

They don’t grow water-intensive crops in Arsikere, yet the Taluk has been categorised as “overexploited” with groundwater extraction of 103 per cent - which simply means more water is taken out than is put back.

Arsikere has over 360 villages of which 25 are uninhabited.

“We don’t do the Basavana habba (cattle festival) either,” says Chandrappa. Cattle, like the ooru jatre is a symbol of pride, confidence and wellbeing for this agricultural community.

They’re all linked in inextricable ways: the land, the people and the cattle. They understand interdependence. They know it’s the only way that all three will live well. But now, the thread that holds them together is unravelling.

Hemavathi, one of Cauvery’s tributaries and the river they thought they knew so well is a stranger to them. In May this year, she ran dry.

Three months later in August, she was in spate. Her seemingly whimsical flows are impacting the lives of communities around her in more ways than are readily visible.

“Earlier each household had 25-30 cattle,” says Chandrappa. “Now, the bigger farms may have 4 or 5, most of us don’t have anything,” he says, his vacant eyes searching the horizon as he speaks mostly to himself. When there is no basava, where is the question of a habba?

The jatres and habbas are the few platforms through which rural communities pass on their traditions to the next generation. Rural folk art, music, dance, theatre and traditional cuisine get an annual airing during these events.

Chandrappa’s generation would like the younger lot to know and live their culture on their land – but that’s a tall order today. The land doesn’t yield and the youth in the village want to leave.

“These young boys nowadays, they don’t care,” he says suddenly angry as he imitates their local slang.

“We used to be united. We used to celebrate our tradition because it’s meant to be celebrated. But nowadays...” we’re invited to complete the story. “Most of my friends have died,” he says. And a way of life has died with them.

In the village, we see young boys speaking loudly on their cell phones and zipping around on their bikes, sometimes three or even four squeezed on the battered backseat of a precarious looking contraption.

They’re impatient with tradition. It hasn’t brought them wealth or the good life. Why preserve something that’s killing them?

“We still celebrate Amavasya and Pournami in the Siddarameshwara temple in the hills,” he says. The hills are still lush because the communities have protected them from deforestation. But on farms, trees and cattle are disappearing.

“People take their cattle up the hill to graze every day. There are lush forests there. While the cattle graze, they eat in the shade of the temple, pray to the deity and return home. The deity protects us,” he says. Somewhere, Hope stirs.

The Central Ground Water Board report says that in most parts, the groundwater quality in Arsikere is good for drinking except for a few areas where nitrate and fluoride was found above permissible limits.

There is a well-developed tank system with 249 tanks in the Taluk. Chandrappa doesn’t understand all this. Neither does he care.

He says the soil needs trees and cattle to renew itself. He knows if the soil is rich enough to hold water, aquifers, lakes, rivers, ponds and wells will fill. And his jatres and habbas will return.

In rural Karnataka – as in all of rural India – a water crisis does not mean taps going dry every other day. It means a civilisation is in limbo with a very real possibility of losing its way of life.