India Being Forced To Battle Outbreak Of Not One But Two Diseases: Covid-19 And Fake News 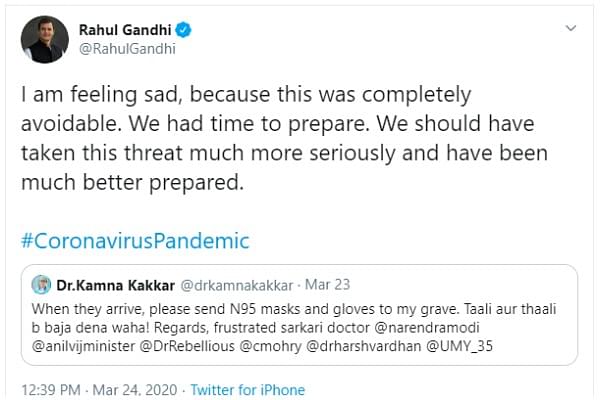 In its damning indictment of the media’s conduct, the Supreme Court had on 1 April 2020 noted that the migration of large number of labourers from cities was triggered by panic created by fake news that the 21-day lockdown would in fact be extended to more than three months.

In the battle against the Covid-19 pandemic, India is competing in a three-legged race. The problem is that India’s leg has been tied down to the gaggle of fake news generated by journalists across the board.

This cabal, seemingly insistent on spreading misinformation, is probably united by their disdain for the current dispensation at the Centre. This has apparently blinded them to basic facts, as they get caught peddling fake news repeatedly in the process.

One of the journalists, Rajdeep Sardesai, had put out a tweet suggesting that the government is going to go for a three-month lockdown. While he deleted the tweet after a while, it is highly probable that the screenshots would have travelled far and wide.

Indeed, even the Supreme Court observed that it was fake news regarding the extension of lockdown that triggered the migrant labourers exodus.

This tweet, however, is only the tip of the iceberg. There has been an attempt to blight the country’s efforts against Covid-19 by propagating a series of fake news to shake the confidence of the people at a critical time.

The Discovery Of ‘Experts’

Interviews and discussions with one Ramanan Laxminarayan by journalists Rahul Kanwal and Barkha Dutt where Laxminarayan implied that his model predicts over 30-40 crore Indians contracting Covid-19 ended up as faux pas moments for them.

The man presented as a doctor turned out to be an economist with a company selling diagnostic kits, raising serious questions on conflict of interest.

Further, as damning allegations about his professional conduct surfaced, his ‘study’ with Johns Hopkins University and Princeton University claiming “25 crore COVID-19 cases in the next 3 months across India" got junked by the very universities it purportedly used logos of, forcing NDTV and IANS to delete their stories on it.

Ironically, the study was not even peer-reviewed, raising further questions on the authenticity of the claims put out and the unethical conduct of journalists furthering Laxminarayan’s line through the entire episode.

Joining them with egg on their faces was The Quint, who discovered another ‘expert’ called Dr Giridhar Gyani.

Dr Gyani is not a medical professional – he is an engineer and a PhD at that.

Not even a basic background check was conducted, and Dr Gyani was declared a convenor of ‘Task Force for Covid-19 Hospitals’. This, when there is no mention of any such task force in any government website.

Further, the Association of Healthcare Providers India (AHPI) of which he is the director general, dismissed the story, calling it misleading.

Misreporting, Thy Name Is Indian Journalist?

Leading the race in misreporting in her own league is ‘eminent journalist’ Vidya Krishnan, who has seemingly covered healthcare for ages.

However, her sense of responsibility and understanding seem absent, as she conveniently misreports India’s stand on local transmission of Covid-19.

Vidya Krishnan’s story for The Caravan Magazine on 14 March 2020 had claimed that while the World Health Organization (WHO) categorised India as having local transmission, both the Indian Council of Medical Research (ICMR) and the Indian government were denying it.

With its foot in the mouth, Caravan ‘corrected’ the story and ‘regretted the error’.

However, in all of this, the seeds of distrust against the government had been sown.

Journalists, civil society and people at large are supposed to be cooperating with the government in such a critical situation, and such ‘errors’ only exacerbate problems.

Moreover, despite her errors and false claims, Vidya Krishnan and the Caravan continue to propagate more fake news on the Internet and continually question India’s approach, even when the WHO has repeatedly praised India’s strategy.

The Print ran a report which floated an unsubstantiated claim on the extension of the lockdown by one week. The driver for this decision was the "alarm of the Modi government on the migrant exodus". However, it seemed more an attempt to deflect criticism about the media’s misreporting of a ‘migrant exodus’.

It was a timely action on the part of the Prasar Bharati News Services (PBNS) that punctured this rumour-mongering. PBNS got in touch with the Cabinet Secretary, who stated clearly that there is no such plan of extending the lockdown.

At a time when the morale of health workers needs the greatest support, some journalists were carrying unsubstantiated stories about the lack of protective equipment.

Dr Harjit Bhatti, the National Convenor of the Youth Congress’ All India Medical Cell took to Twitter to claim that Assam Medical College’s health workers were forced to cover themselves in plastic bags used to carry biomedical waste.

Journalists like Vijaita Singh and Vinod Kapri lost no time in spreading this fake news before Assam’s Health Minister Himanta Biswa Sarma set the record straight on the matter with an FIR threat.

Funnily enough, Dr Bhatti retweeted the image later, claiming that he got calls from Assam Medical College, and that while they have PPEs, the plastic suit was ‘tested’ for use should a shortage occur.

As if this one doctor was not enough embarrassment, another Dr Kamna Kakkar, supposedly working at PGIMS, Rohtak, in Haryana was discovered.

Dr Kakkar claimed that doctors were not being provided with protective equipment by the authorities.

Much damage was done by ever ready journalists before Dr Kakkar deleted her account and apologised for the misinformation and panic created.

The tweet was also quoted by Rahul Gandhi, leading to the further amplification of this false claim.

In these times of difficulties, India has shown remarkable courage and capacity to deal with the Covid-19 outbreak. However, the epidemic of fake news is proving to be of little help.

Even the Supreme Court of India has directed media professionals to maintain a strong sense of responsibility and ensure that unverified news capable of causing panic is not disseminated.

With this indictment staring in the face, one can only hope that the media will perhaps start to work responsibly, keeping the nation’s best interests in mind in this hour of need.

However, the chances seem less, and as someone had famously quipped — if wishes were horses, we would have a stable full of them.