India Must Abandon Its Namby-Pamby Approach To Dealing With Kashmir 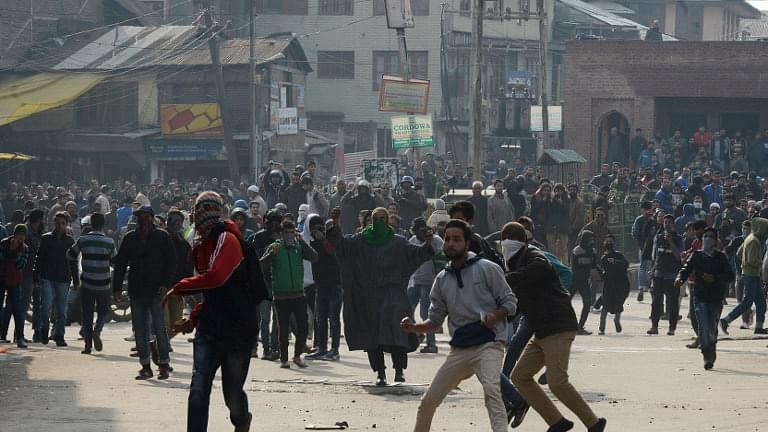 Kashmir’s stone-pelters are a bigger threat.

After the recent encounter in Kashmir’s Budgam, where the army found itself fighting on two fronts – terrorists in front and stone-pelting mobs behind – India must hunker down for a long war of attrition with the jihadis. Three “civilians” – a misnomer for jihadis in civilian garb but without AK-47s – were killed as the army decided to strike back.

It is good that the Army Chief has made good his promise that those aiding terrorists will be dealt with like terrorists themselves, but there are discordant notes being struck by politicians who still think talks can sort out the situation, including Chief Minister Mehbooba Mufti and Congress leader P Chidambaram.

It is silly to expect that talks with Pakistan or Kashmiri separatists will somehow bring peace to the Valley. It won’t. The only way peace will come is when the security forces wear down the jihadis and Pakistan-backed terrorists over years, and the local population realises that they have no alternative but to be a part of secular India. There is not going to be any instant nirvana in this deadly game.

We made a huge mistake when we failed to reverse the exodus of the Pandits in the 1990s. When ethnic cleansing is not quickly reversed, it changes the ground situation. Those evicted grow roots elsewhere, and the Valley ceases to be a place for return. Older Kashmiris may occasionally regret the exit of the Pandits, but their children don’t have that problem.

This was precisely Pakistan’s plan. Once you make the Valley a Muslim-only place, a generation will grow up thinking Kashmir is only for Muslims. Most of today’s teenage stone-pelters have probably not seen a Pandit in their lives, and for them Kashmiriyat has only a territorial meaning. This is why one top Hizbul Mujahideen commander, Zakir Rashid Bhat, no longer felt it necessary to pander to Kashmiriyat or even azaadi. He was brazen enough to emphasise that the fight was for Islam, and nothing else. The malcontents in the Valley thus think nothing of waving Pakistani or Islamic State flags, for this is the goal they now find easier to identify with – with no Hindus in sight in the Valley.

There is no easy way out of this mess, and we must grit our teeth to claw back the advantages we had earlier. The tough decisions we need to take include the following:

First, we need to unilaterally change some of the terms of Kashmir’s accession, especially clauses that allow no Indian to settle in the Valley. We must repopulate the Valley and change its demographics – this can be held out as a threat to force Kashmiri militants to abandon their violence, and if they don’t, the threat must be made good by changing the law. We need a Rajya Sabha majority for such changes. Hopefully, this can happen by early 2018-19. Ideally, the Congress party should be brought on board, but if needed, this must be done unilaterally. Without displaying the loaded gun of a potential change in demographics, the Valley will be overrun by jihadis. In any case, if J&K is a part of India, a part of India must be free to settle in J&K.

Second, there must be significant investment in intelligence and irregular fighting units apart from the state police and central security forces. The jihadis are now targeting Kashmiri police officials at home, which means they will now feel intimidated. The only way to counter this is by using irregular forces to fight the jihadi groups. This is going to be a long-drawn war of attrition, and we must prepare for this. The main job of fighting terrorists must be done by irregular units, and not the army. The Central Reserve Police Force (CRPF) and the army must be in the background. Another thought: if many of the stone-pelters are paid agents or mercenaries, as this India Today investigation proves, one wonders why the Indian state finds it so difficult to buy their loyalties in some way.

Third, the Pandits must be sent back to the Valley in defensible enclosures. Their exile needs to end, and India’s war can be better fought if Hindu Kashmiris are there to provide a counter-argument to Islamism. The Pandit exile cannot continue indefinitely. If the jihadis oppose their re-entry, it will expose them for what they really are: Islamist bigots masquerading as freedom-fighters. If the Mehbooba Mufti government demurs, the Centre must allow it to fall, and use Governor’s rule to get this done.

Fourth, India must keep up the pressure for independence in Balochistan and Sind so that Pakistan gets a renewed message that its own existence will be in peril. The Chinese must be told quietly that their interests in Gwadar and Balochistan will be safer if they are willing to lean on Pakistan to end the insurgency in Kashmir. China has a long-term interest in building a road to Gwadar Port, which they are financing, and also the China-Pakistan Economic Corridor (CPEC), which has to pass through Gilgit-Baltistan. China is believed to be pressuring Pakistan to declare Gilgit-Baltistan as its fifth province so that the CPEC passes through officially-declared national territory, and not Pakistan-occupied J&K. Even though India is not about to give up its claims to Pakistan-occupied Kashmir, including Gilgit-Baltistan, the incorporation of the latter into the Pakistani state means that the old UN resolutions on holding a plebiscite are invalid. It also means that azaadi is no longer a tenable objective of the Kashmiri struggle, with Pakistan having swallowed Gilgit-Baltistan. We should have no qualms in making J&K a fully Indian state.

The fight in J&K is between Islamism and secularism, not India and Kashmiriyat. We should have no doubts on what our end-goals should be here. Full incorporation of J&K into India.