Indian Astronomy and Mathematics In The Classical Era Of Aryabhata 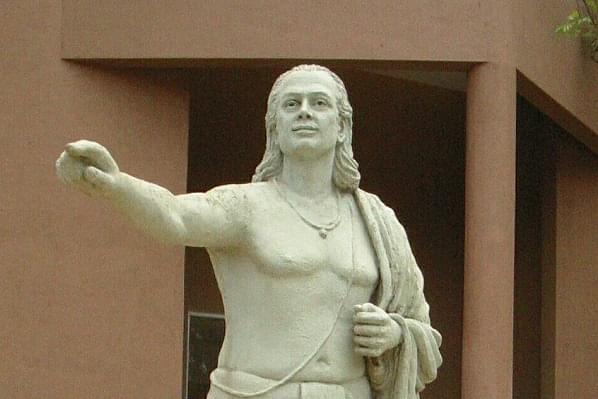 A statue of Aryabhata.

The Genius And The Myths

He ranks with Archimedes, Euclid, Isaac Newton and Leonard Euler as one of the greatest mathematicians of the world.

He began a new epoch in Indian astronomy and mathematics, that continued for more than a millennium. His book Aryabhateeyam is a masterpiece of brevity and eloquence.

But what did Aryabhata actually do? Aryabhata did not invent zero; or gravity; or the heliocentric system.

As I wrote in my first essay, even Indian mathematics and Sanskrit scholars are stunningly ignorant of Aryabhata’s actual accomplishments.

Since we are equally ignorant of almost all of ancient India’s glories, this is not specifically galling; just generally abysmal.

Only Bhaskara was, perhaps, as popular and admired, but unlike Newton’s apple or Watt’s tea kettle, or the anecdotes of Birbal or Tenali Raman, we don’t even have popular legends about him.

But we are so creative, we blame the British for this situation, decades after they left.

Wait! Did he invent all of these? Ah, that’s the question. Aryabhata himself claims not a single invention.

He explicitly states that “by the grace of Brahma, the precious jewel of knowledge (jnana-uttama-ratnam) has been extracted from the sea of true and false knowledge (sat-asat-jnaana-samudraat), by the boat of my intellect (sva-mati-navaa).”

Sulba Sutra and Jain mathematicians knew how to compute square roots, but Aryabhata was the first to describe the algorithm.

We don’t know if cube roots were calculated earlier, his algorithm is the oldest extant. His sine calculations are considered much superior to those listed by Varahamihira. His kuttakara algorithm to find solutions is considered ingenious even today.

It is not feasible to explain his mathematical and astronomical discoveries in a magazine article for the general reader. There are excellent translations, technical papers, books that do that.

This essay’s purpose is to provoke you to read them, and marvel at Aryabhata’s sva-mati-navaa. And to place Aryabhata and his work in historical context.

The 18 siddhantas were attributed to rishis. But every jyotisha siddhanta after Aryabhata and Varahamihira, is attributed only to men, not rishis.

There was no fear or taboo against criticizing. This era of Mathematics and Astronomy is called “Classical” by historians. I prefer Varahamihira’s phrase Manuja Grantha.

Philosophically, this verse by Varahamihira, is as insightful and expressive as Kalidasa’s verse puraanamityeva na saadhu sarvam (Not everything ancient is excellent).

The phrase Kusumapure abhyaarcitam gnaanam (knowledge respected in Kusumapura), in Aryabhateeyam hints that he lived in Kusumapura (Pataliputra or Patna). No biography or portrait of any Indian astronomer exists.

The pictures of Aryabhata pervading the internet, as well as his statue, are merely artists’ imaginations.

Almost all we know about him comes from his books and those of his critics and commentators, like Brahmagupta and Bhaskara I, who mentions Pandurangasvami, Latadeva and Nishanku, as pupils of Arybhata.

(1) Aryabhateeyam in 499AD when he was 23 years old. Multiple copies survive in full form.

(2) Aryabhata Siddhanta, which is lost, and known only by quotations from commentators. In this book, Arybhata advocated midnight as the starting hour of each day, instead of sunrise, perhaps based on Surya or Romaka Siddhanta. Aryabhateeyam uses sunrise as day-beginning.

I will confine this essay to Aryabhateeyam. It consists of two parts. The first, Dasha Geetika (Ten Songs), lists astronomical constants:

· Orbital periods and Diameters of Sun, Moon, Planets
· Number of years in a yuga, yugas in a kalpa, kalpas in a manu
· Deviation of planets from the ecliptic
· Epicycles, in different quadrants
· Table of Sine differences.

His first verse is a salutation to Brahma - he was a scientist, but not an atheist. Almost every jyotisha who followed him begins his work with a salutation to his favourite God.

Jain mathematician Mahavira begins with an invocation to his namesake, the tirthankara Vardhamana Mahavira.

It may also indicate that he was updating the Paitamaha (Brahma) siddhanta, some of whose data had become obsolete.

The siddhantas of later jyotishas were each nearly a thousand verses long. What Aryabhata summarises in one or two verses is explained by them with whole chapters.

So cryptic and compact was Aryabhateeyam, it was impossible to understand without bhashyaas (commentaries); such was its impact, that bhaashyaas were written on it centuries after others improved upon his methods.

Telugu, Marathi and Malayalam commentaries followed those in Sanskrit, Arabic etc, and English translations in the colonial period, which range in appreciation from astonishment to incredulity to calumny.

The mathematics set forth by Aryabhata is mostly practical, not theoretical: its primary purpose is astronomy. I mention only simpler concepts in this essay.

It also varies from extremely simple to extremely complex statements, hypotheses, and algorithms.

We must understand that mathematics was not taught to schoolchildren, then as it is today; it was perhaps the most advanced of technical subjects and confined to specialists.

Arithmetic symbols familiar to us like + - x ÷ = were only introduced in fifteenth century Europe. Mathematics was not expressed in equations, but in slokas.

This is a simple algorithm, to calculate one value, based on known parameters.

A more complex version is his algorithm for summation of a series, which includes several calculations, including for the mean of the series, and encoding an alternate algorithm!

This way of stating multiple mathematical formulae is called muktaka by Bhaskara I.

Aryabhata divided time and circles with the same geometric units as earlier siddhantas. His major departure, was to define the four yugapadas namely krta, treta, dvaapara and kali, as of equal time; and as the time it took all the nine planets to align, or complete an integral number of revolutions around the earth.

He included a biographical note, that 3,600 years passed between the beginning of Kali yuga (end of Mahabharata war) and the twenty-third year of his birth. This implies that the constants in DashaGitike were based on his personal observations in that year.

This differed from the smriti definition of the first three yugapadas as four, three and two times as long as the kaliyuga, and offended the orthodoxy of everyone.

Even his followers didn’t accept this division, but they followed his computations and algorithms, as they were significantly better than those of earlier siddhantas.

Arybahata states that Solar and Lunar eclipses are shadows of the Moon on Earth and Earth on the Moon, respectively.

He also stated that the Sun is the only source of light, and not just planets, but even the stars only reflect sunlight.

Aryabhata used the metaphor of a kadamba-pushpa-grantha to explain how people and creatures in all parts of the world believe they are standing on top of the world.

He introduced another metaphor, for Earth’s rotation: consider a boat-rider on the Ganga, who feels trees on the shore pass him by; whereas, in reality it is the boat that is moving.

Similarly, Aryabhata suggested, the earth actually rotates, and like trees on a river bank, the stars seem to revolve around it. But it was only a metaphor, not a proof.

He also explains such concepts as Ascensions of the zodiac, Sine of Ecliptic etc, which are too technical for this essay.

The impact of Aryabhata was phenomenal. Even fervent critics could not ignore him or his works. But he launched an era of manuja grantham, and he was followed by a long line of brilliant scholars, whom we will discuss next.