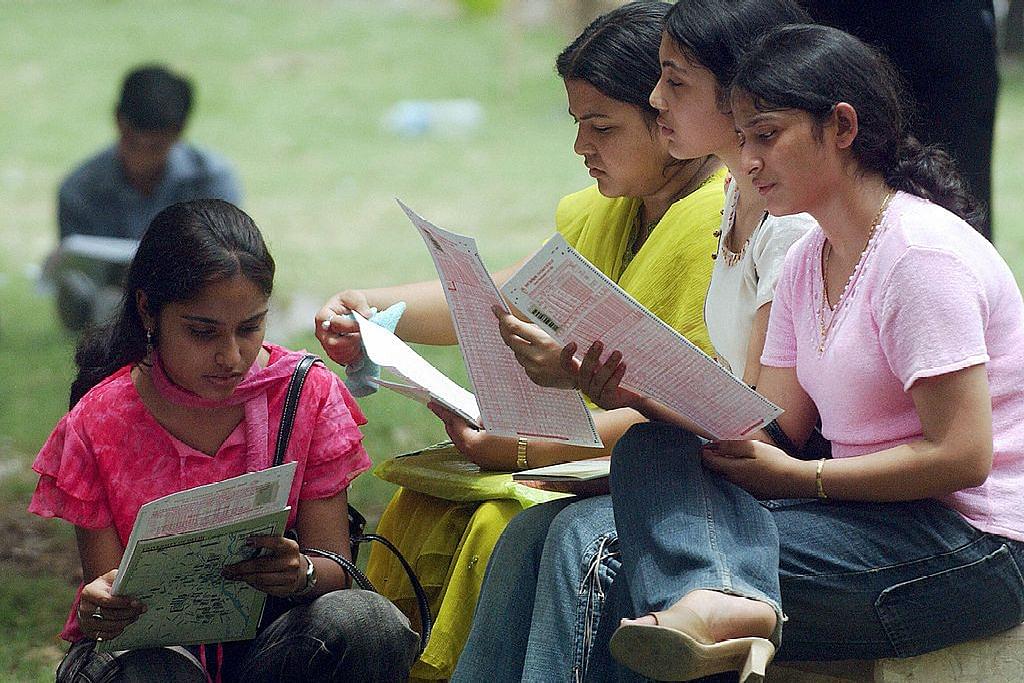 More and more women are going in for higher education in India. (MANPREET ROMANA/AFP/Getty Images)

India's focussed efforts to include women in mainstream higher education has gained significant momentum over the last decade and achieved a notable milestone last year — in 2018-19, gender parity in the overall Indian higher education system reached 1.0 for the first time.

The gross enrolment ratio of women at 26.4 exceeded that of men at 26.3. Over the last eight years since MHRD (now Ministry of Education) has been tracking annual higher education (HE) indicators in detail via the All India Survey on Higher Education (AISHE), India has witnessed a steady increase in the number of women enrolling and graduating.

It is noteworthy that this swift rise in women enrolment vis-à-vis men is a pan-India phenomenon — occurring across the country in all states and within every significant social group.

ALL MAJOR INDIAN STATES ARE ENROLLING WOMEN AT HIGHER RATES

The phenomenon is pan-Indian — most states irrespective of region/zone are registering higher enrolment CAGRs for women compared to men. Table 1 analyses enrolment numbers and CAGRs for major states in four geographical areas of the country.

The most striking difference is in the north-central zone — in Madhya Pradesh and Rajasthan, the enrolment CAGRs differ by a mountainous 5 points. The difference is more moderate in other north and central states of Uttar Pradesh and Punjab but distinct, nevertheless.

Moreover, in both Uttar Pradesh and Punjab, the absolute number of women enrolled exceeds men's enrolment.

In the eastern zone, too, the same phenomenon is observed. Jharkhand is reporting the highest CAGRs across India for both genders — 10.4 per cent for men and 11.7 per cent for women.

Here too, women's enrolment CAGR's are higher than men, consistent with the rest of the country.

THE SAME PHENOMENON IS OCCURING ACROSS SOCIAL GROUPS

The clear trend of women enrolling at higher rates than men is not just a state phenomenon; it is also occurring across social groups, as demonstrated in Table 2.

Within the Other Backward Castes (OBC) community too, women's enrolment at 7.6 per cent is higher than men at 5.2 per cent.

Enrolment rates for women within the Muslim community are growing the fastest in India at 8.7 per cent — more significant than for any other group and gender in India.

For other minority communities, the rates are almost the same – 7.8 per cent for men vs 7.1 per cent for women. Using these enrolment numbers for communities and back-calculating for general enrolment, a most startling observation comes to fore.

Enrolment rates for men in general category are declining at a rate of (-)1.6 per cent while women's enrolment in that category is only growing at 0.9 per cent.

It seems the reservation system is yielding results.

All citizens in India, irrespective of gender, region or community, now recognise higher education as an aspirational lever of socio-economic mobility.

Women across India — be they in developed or underdeveloped states and various social groups — are enrolling in higher education with unambiguous aspirations. India has successfully mainstreamed gender in HE.

As India's gross enrolment ratio climbs to 50 from 26.3, if these trendlines continue, soon there will be more women graduating from college than men in absolute numbers.

This is already the case in states like Uttar Pradesh and Punjab. It is imperative that the country's leadership — at the Centre, State and administration levels — plan to onboard all this valuable human and intellectual capital into the workforce so women may find gainful employment in their respective states and communities.

Harnessing this untapped potential will be vital to driving India's next wave of economic growth.