Is 2022 India’s Year Of Living Dangerously? 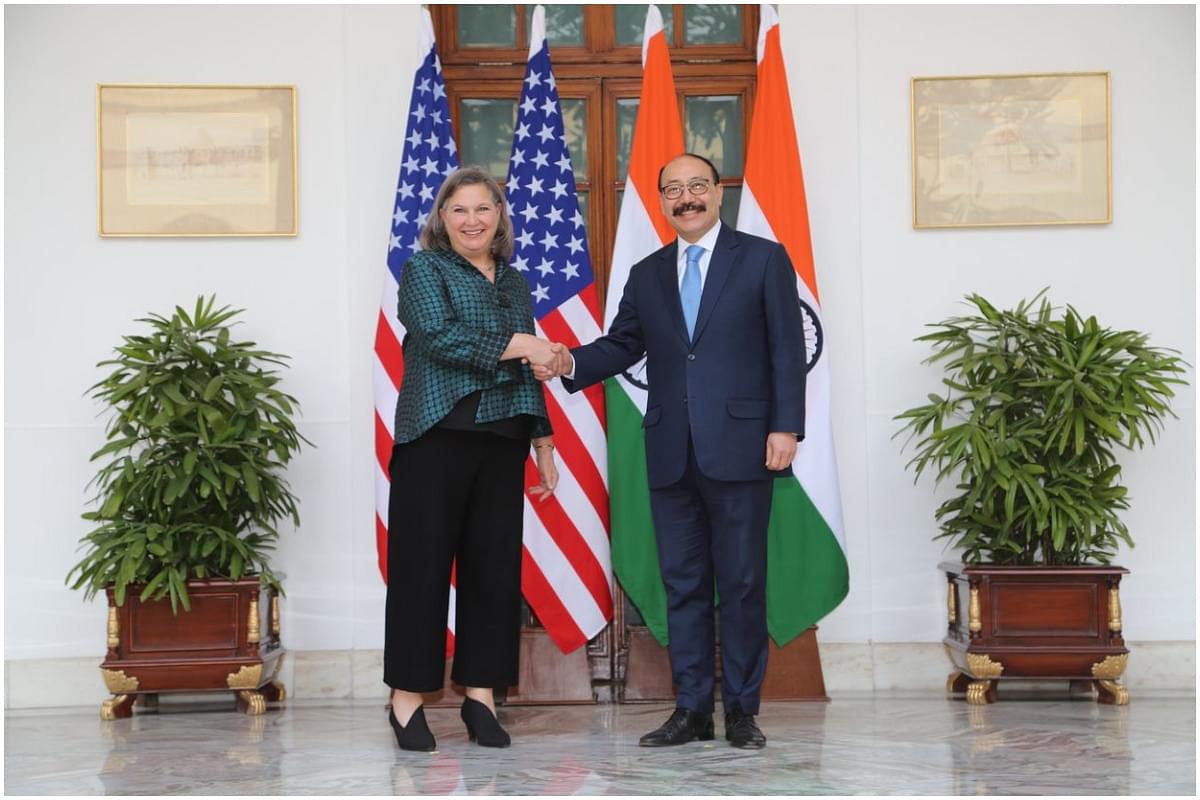 The year 2022 is not yet 100 days old, but so much has already happened that it feels like it is a point of inflection for India.

For one, the astonishing outpouring of support for the film The Kashmir Files suggests two things. One is that it is possible to speak ‘truth to the power’ of academia, media and film establishments that have gaslighted Indians for 70 years with the pabulum of ‘secularism’. The other is that there is a certain determination to not to be fooled any more.

Even the usual suspect ‘urban naxals’ are only going through the motions in traducing the filmmaker and trashing the film. They too can read the writing on the wall.

The fact is that crimes against humanity affect all of us in a visceral way, and we react with sympathy and sorrow: except, that is, if you are from the Hindi film world, or from the sports world in India. Despite a virtual flood of comments by ordinary folks, I believe (almost) no one from the film industry or sports expressed their opinion. These are people who are ready to ‘take the knee’ for ‘Black Lives Matter’: a second-hand meme of no direct import to them.

The second remarkable thing that has happened is the re-election of several Bharatiya Janata Party (BJP) state governments. There is a message there: performance, not identity, matters now.

The third notable issue is India’s stand on the Russo-Ukraine war, and how the reactions to it have exposed, once again, that India is essentially friendless and has to go it on its own.

The election results in several states might be summarised in a few conjectures:

Anti-incumbency has been a fixture in Indian politics because of widespread misgovernance and corruption. After five years, the average voter gets so fed up with the incumbents that his/her only thought is “throw the rascals out”. The fact that the other bunch is not any better does not occur to them until it is too late, and then you have buyer’s remorse.

This is the general pattern, but certain political parties managed long tenures, winning again and again. The reason is that they ran reigns of terror, liquidating those who dared stand for election against them, and using their cadre power to punish (and reward). The communists in West Bengal did this for 25 years; now the Trinamool Congress (TMC) is doing the same (a family of 10, apparently Muslim women and children, locked in their house and burned alive: a sad echo of the Sabarmati Express burning in Godhra, Gujarat in 2002).

In this environment, it is telling that there was no post-election violence in Uttar Pradesh, the hardest-fought contest, and the big prize on offer. There were pogroms in West Bengal last year after the TMC won, and BJP candidates were attacked, BJP women raped, and BJP cadres lynched. This continues: a day or so ago, Congress councillors were shot dead.

There was no violence in the other states that the BJP retained, either: Uttarakhand, Goa and Manipur.

This implies that the maintenance of law and order has become a basic right expected by citizens. Especially in UP, as described in Shantanu Gupta’s fine book The Monk who transformed Uttar Pradesh (Garuda Prakashan, 2021), there has been a big change as once-invincible dons and gangsters were arrested in droves:

“Mukhtar Ansari is in Banda Jail, Atique Ahmed is in Central Jail, Gujarat, Brijesh Kumar Singh is in Varanasi Jail, Bablu Srivastava is in Bareilly Jail, Muneer is in Tihar Jail, Delhi…” and so on. “...150 criminals were gunned down, 3427 criminals sustained injuries, 44,759 criminals were arrested… 11,981 criminals got their bails canceled and surrendered in court.”

This has been especially welcomed by women, as they are now less likely to be harassed, humiliated or abducted on the streets.

Speaking of women, it appears that they vote consistently more often for BJP than men. That small but persistent difference may be enough to give the BJP a winning margin, especially considering the other statistic that the turnout of women voters is higher than that of men.

This is a big change from the expected behaviour of women. We have been told that women vote strictly according to the wishes of the family patriarch, but that does not seem to be the case (any more).

My conjecture is that there is something more fundamental at play here. Women are voting with their purses. It has long been an axiom in development economics that women are far more prudent budgeters and spenders than men. Women tend to spend money on things that benefit their entire family, and especially their children.

It appears that the various programmes for low-income groups, including Direct Benefit Transfers (bypassing middlemen), indoor toilets (women can protect their modesty and also save themselves from attacks), cooking gas cylinders (no more foraging for firewood, or smoke inhalation), and most of all, Jal Jeevan Mission for piped water (no more spending hours carrying water home) are tangible benefits for women. Not surprisingly, they voted for those who brought them these benefits. This may well have been the clinching factor in the BJP’s victories, most especially in UP, where Yogi Adityanath is seen as both uncorrupt and one who is not to be messed with.

It is also believed that instead of identity politics, this time it was issue-based politics that won. In context, that means that jati-based voting (which is not per se a dumb idea, as you’re doing collective bargaining based on your clan or tribal loyalties) has been superseded by something that’s arguably more useful: performance-based voting. This could be construed to mean that the Indian voter is now more mature and discriminating.

The final claim is that there was a consolidation of a pan-Hindu voting pattern, quite possibly as a backlash against the usual en-bloc voting by Muslims. As Nassim Nicholas Taleb pointed out, the obstinate minority usually wins and gets its way, but not this time. If Hindus have figured out that by voting en masse, they too can win elections, that is also arguably a good antidote.

The last issue we should consider is the Russo-Ukraine war. What has been a little surprising is how India has asserted its non-involvement in this European war, a snit-fit between NATO and Russia. India used to poke its nose into every issue and offer homilies based on a presumed Gandhian moral superiority, which accomplished nothing other than irritating all and sundry.

The fact that India now has the good sense to keep quiet about everything that is not of immediate concern to its own interests is a pleasant surprise. What was predictable, though, were the hissy-fits by various white foreign policy ‘experts’ who simply couldn’t believe that India might have, and is even entitled to have, a view that’s different from NATO’s. They tried all sorts of tactics: shaming, wheedling, cajoling, sweet-talking, threatening.

The fact that India has apparently stood its ground might mean that India is at a turning point, where it is confident of its own prospects. For instance, even though the war bleeds India on the oil front, conversely it benefits as a big wheat exporter. In fact, India should think carefully about an ‘organisation of food exporting countries’. Everybody, after all, has to eat.

An India that can say “No” is surely a novelty. This is not a risk-free proposition by any means. I am reminded of Shintaro Ishihara and (Sony chairman) Akio Morita’s book, The Japan that can say No (1989). As we now know, American financial engineering, including the Plaza Accord, forced Japan into a nasty and prolonged recession that still hasn’t quite ended. But the Chinese learned from that. I hope India’s strategists are paying attention.

On the other hand, though, there was a visit to India by Victoria Nuland, who is called 'Ms Regime Change' in some circles for her role in the 2014 ‘Maidan Revolution’ in Ukraine that ultimately installed President Zelenskyy there. And we know what has happened to Ukraine.

Frankly, Nuland’s trip is a little sinister. Who exactly are these “next generation thought leaders?” Is this ‘sub-national diplomacy’ aimed at balkanisation?

I am reminded of a quote from Kwame Nkrumah: “The essence of neocolonialism is that the state which is subject to it is, in theory, independent & has all the outward trappings of international sovereignty… in reality its economic system & thus its political policy is directed from outside.” That is what India is supposed to be: a poodle with the form but not the substance of independent foreign and economic policy.

Ironically, just when Nuland was in India, Madeleine Albright passed away. The two have a lot in common: both are seen as dangerous for India. Albright was former president Bill Clinton’s 'hatchet lady', and Nuland is Barack Obama’s and Joe Biden’s. Both had an Eastern European parent, and maybe as a result are instinctively Atlanticist, and pretty much have no appreciation for the Indo-Pacific.

Albright was abrasive, and if I remember right, her lectures and finger-wagging were universally loathed in India. Nuland may be more soothing, but it’s telling that her visit coincides with the new Aam Aadmi Party (AAP) Chief Minister of Punjab demanding Rs 50,000 crore from the government of India per year to fulfil AAP’s own election promises. Did they assume the money would just drop like manna from the heavens?

In the midst of all this, the Chinese Foreign Minister visited India, after condemning India at an OIC conference in Pakistan, and visiting Afghanistan. Ideally, India should not have allowed such hyphenated visits or unwelcome visitors: the man should have been uninvited.

Just as British busybodies were, in fact, dis-invited. Sorry, Boris. India really is in no mood to be lectured and tut-tutted at by your MPs.

Yes, welcome to the year of living dangerously. India just honoured the day in 1931, 23 March, that Bhagat Singh, Sukhdev and Rajguru were hanged by the British. The Bharat that they died for is slowly emerging, although it has taken far too long.