Is Karnataka The New Centre Of Modern Indian Batsmanship? 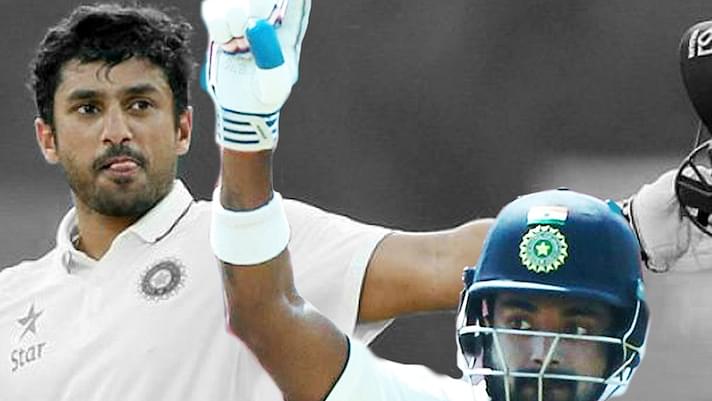 Karun Nair’s gargantuan essay of 303 not out against England at Chepauk took an unsuspecting cricketing world by storm. A youngster, all of just 25 years 14 days, and only in his third Test innings, had achieved what some legends of Indian and world cricket could not. Folks sat up and rubbed their eyes in disbelief. The reaction was not at all disparaging considering that Nair himself admitted even three days after the historic innings that its import had yet to sink in! Test century, yes; but triple? Over the top.

Only avid cricket followers would have been conversant with the cricketing capabilities of Nair before the blockbuster innings announced it to a startled world. Here he was, this relatively unknown youngster, coming up with such an amazing feat that it literally catapulted him into an exclusive club of Test triple tonners whose fellow members included legends of the game, Don Bradman, Garfield Sobers, Brian Lara, Len Hutton, Hanif Mohammed, Virender Sehwag, Chris Gayle, Graham Gooch, among others. Roll those names on your tongue and slip in a Karun Nair alongside. Well, that’s the sort of exalted company he is in.

Cut now to another prodigious talent, K L Rahul. The classy batsman is just a few months younger. He made his Test debut at the age of 21 and in a span of less than three years has notched up four Test centuries, one ODI (one-day international) ton and the fastest ever T20 international century by an Indian (100 off 46 balls Vs. West Indies).

Rahul was unfortunately hit by injuries and, in between, by dengue fever and thus could play just 12 Tests, three ODIs and five T20s in three years. Even in those limited appearances, he did enough to be acknowledged as the second best Indian batsman, after Virat Kohli.

Initially, Rahul was reckoned to be suitable only for Test cricket, and was promptly branded as a long-duration match batsman. But within a short period of time, he dispelled all such notions by proving his immense worth in all three formats of the game. Again, like Nair, Rahul’s success, both in Tests in Australia and limited overs cricket elsewhere, surprised many casual cricket watchers.

Rahul handled the pace and bounce of Australian pitches comfortably in Tests and later his easy, flowing style of batting saw him strike the ball clean and far in limited overs cricket much to the delight of Indian fans.

Rahul and Nair were, of course, recently heralded successes of Indian cricket. But at the beginning of the year, another right hand batsman made a compelling mark for himself on Australian soil.

Manish Pandey had been knocking on the doors of the national team for quite some time. The selectors though were unmoved, and instead, ushered batsmen of doubtful potential into the team. But you can’t keep a good man down and before long Pandey’s credentials, diligently earned through the sheer weight of performance, had to be acknowledged.

Pandey’s feats included being the first Indian to register an Indian Premier League (IPL) T20 century. That knock came in IPL’s second season when the event was shifted to South Africa. Pandey was just 19 years of age and should have been identified and carefully groomed for national colours.

Instead he had to wait six years before he got the selectors’ nod. He made a cracking 71 on an ODI debut against Zimbabwe, yet did not get too many chances subsequently. His brilliant century against Australia at the Sydney Cricket Ground, only his fourth innings in six months, succeeded in rubbing the selectors’ nose in dirt all over again.

Pandey, during that unbeaten century, paced his innings brilliantly in a memorable chase of the Australians’ massive total of 330. It was the only Indian win of the tour and Pandey with that innings revealed outstanding temperament and character.

The fact that these three young batsmen adapted themselves superbly to international cricket and did so resoundingly well in challenging circumstances, is a tribute to the thorough grounding imparted by the Karnataka State Cricket Association (KSCA).

KSCA had identified their talent and nurtured and groomed them before providing the stage to blossom. It would be in the fitness of things to point out that no other state has thrown up three such outstanding young batsmen at the same time, at least not in the last 40 to 50 years.

The trio, in turn, is a tribute to the system which primed them from young hopefuls to international class cricketers.

Many of the innovative practices of KSCA from the early 2000s were subsequently adopted by the Board of Control for Cricket in India (BCCI) and given expression through the National Cricket Academy. These have helped spread the game to various corners of India and ensured that brilliant players could emerge from small towns and villages, something unheard of when Indian cricket was all about Mumbai and a couple of other major cities.

The reason for Karnataka developing cricket in the districts goes back to the early 2000s when the state's junior cricket was floundering. There did not seem to be any bright youngster who could take over from Rahul Dravid, Javagal Srinath, Anil Kumble and others. The state’s cricket future looked extremely bleak.

It was then that KSCA secretary, former Test cricketer Brijesh Patel, decided to make a paradigm shift in the search for talent. He roped in cricket consultant, Makrand Waingankar, whom he knew from his Mafatlal team cricket playing days in Mumbai.

The latter set up talent identification camps all over the state, even as he painstakingly travelled the length and breadth of Karnataka to spot fresh talent. He was aided by a small group of former state cricketers and coaches and within a short period of time they zeroed in on an assortment of cricketing talent.

Vinay Kumar, son of an autorickshaw driver in Davangere, was one of the first to catch the eye. K L Rahul from Mangalore was just 11 years of age and thus outside the 12 to 17 age bracket targeted for the training programme. Bangalore’s Karun Nair too was below the threshold when he was later included. On the other hand, left arm medium pacer Sreenath Arvind was 18 years of age.

The Talent Resource Development Officers spotted many others, Robin Uthappa, KP Appanna, CM Gautham and virtually the whole current Karnataka team. Only Abhimanyu Mithun, came from outside the system, while Stuart Binny, who played matches in the Academy, was trained by his dad, Roger Binny.

KSCA opened a string of coaching camps all over the state and the best players were called to Bangalore during summer months for intensive coaching and to play matches under the supervision of England’s former fast bowling great, Frank Tyson, and ex-India cricketer Balwinder Sandhu. Batting legend G R Vishwanath was the academy’s chairman.

The late Tyson, a teacher by profession in Australia, streamlined the coaching system to ensure that there was a uniform training method followed all over the state. He set time tables for progress and development and these included physical work outs and goals too.

Matches were played in many parts of the state. The erstwhile chief minister S M Krishna had granted land in tier two and three cities, and these served in meeting KSCA’s ambition of ensuring that no child was more than 60 to 80 km away from a cricket training facility.

Additionally, the best of players along with state cricketers played annual emerging cricketers series with Australia and South Africa. This scheme was taken over by the BCCI which by then had also adopted KSCA’s methods and started a National Cricket Academy, replete with TRDO system, matches, coaching levels, physios, etc.

In turn, KSCA adapted from BCCI’s IPL and started their own Karnataka Premier League in 2009 wherein a vast number of cricketers above the age of 17 learnt to play under lights, pressure and TV cameras.

This, along with progressive coaching methods, increased number of matches and intense competition helped fast forward the development of many talented cricketers.

The best among them, Uthappa, Vinay Kumar, Mithun, Arvind, Binny and later Rahul, Pandey and Nair broke into the Indian team.

Uthappa was one of the heroes of the inaugural ICC 2007 T20 World Cup championship- winning Indian team before being cast out. The reasons for his falling out of favour are not clear though merit could not have been the reason.

Likewise 21-year-old Mithun was inducted into the national team when he was still raw and had played less than a season of first class cricket. He bowled at a sharp pace and did reasonably well on tough bowler-unfriendly pitches of Sri Lanka.

At his prime he was among the fastest bowlers in India, but he never got the opportunity to express this on the pacy tracks in Australia, South Africa or even England where his sharp in-swing bowling could have been a handful.

Vinay Kumar too did reasonably before that horrendous bowling stint against Australia in an ODI in Bangalore finished his international career. Australia were chasing India’s massive total of 383, but for some strange reason, an off colour Kumar was persisted with during field-restricted powerplay overs although other bowlers had overs in hand.

The discerning believe the Karnataka skipper has a shrewd cricket brain and it is thus no wonder that he has marshaled the team to multiple Ranji Trophy, Vijay Harare and Irani Cup titles.

While the above mentioned cricketers, along with Binny and Arvind, have done the state and country proud, there are other thoroughbreds in the stable who need to find a channel for their talent pretty soon.

Ravikumar Samarth, a brilliant fielder and opening batsman, is one of the unsung heroes of the state. The 23-year-old has the temperament and ability to excel and needs to be given the opportunity before long.

Another is 22-year-old Shreyas Gopal. He is an excellent right hand batsman, but is unable to get to bat higher up the order in a team of talented batsmen. Gopal is also a very good leg spinner. Like Samarth, he needs more exposure and opportunities to parade his undoubted skill.

Thus, as can be seen, a rigorous system which took into consideration talent scouting, coaching, physical training, mentoring, equipment, matches, tournaments, grounds and allied facilities for over a decade is now bearing rich fruit. A number of good cricketers from remote parts of the state have emerged to not only make the state proud but make waves on the national and international scene.

May their tribe grow.