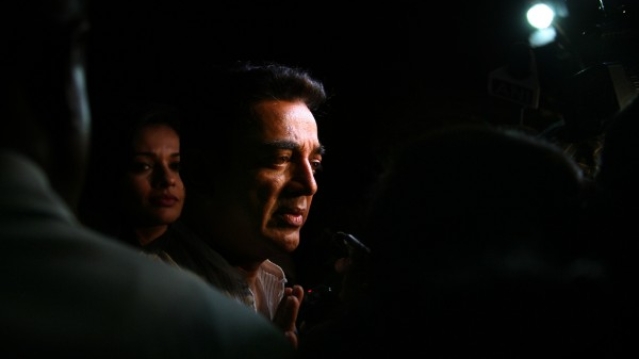 Actor Kamal Haasan, who has recently taken the political plunge, in a weekly column that he pens for a Tamil Magazine Vikatan has claimed that uniting the four southern states and shaping a ‘Dravidian’ identity will serve as a bulwark against the allegedly discriminatory attitude of the central government. According to the actor, the identity would help stop what he termed the ‘dictatorial’ attitudes of the government against the South Indian states.

Haasan further said that the Dravidian identity transcends linguistic barriers and is not limited to Tamils. The self-declared atheist actor and wannabe politician also equated the Dravidian identity to that of Shiva, saying “there was no shame in being known as the Shiva of south India”. He then went on to call his Dravidian stand as a combination of ethnicity, self-respect and love for the mother tongue, which also applies to all of India and claimed that it was what Nehru observed – unity in diversity.

The 63-year-old actor has a penchant for muddled thinking. A cursory glance at his Tamil tweets will confirm it. In fact, his tweets are currently the butt of many jokes in the Tamil social media more for their artificial and pretentious Tamil style and almost an absence of meaningful content.

Consider, for example, his batting for Dravidian identity.

For decades, the neighbouring ‘Dravidian’ states around Tamil Nadu have had a raw deal at the hands of the so-called Dravidian leaders of Tamil Nadu.

When M G Ramachandran (MGR) raised a banner of revolt against Dravida Munnetra Kazhagam (DMK) supremo and then chief minister Karunanidhi, the latter responded by launching a vituperative tirade against the wildly popular matinee idol attacking him on his Malayali roots. Karunanidhi thundered on the floor of the state assembly, “We will not allow two Keralas in South India.”

A fringe group, Tamizhar Paathukaapu Peravai (‘Forum for the protection of Tamils’), allegedly astroturfed by the DMK, armed with knives, soda bottles and cycle chains, targeted Malayali-owned establishments in Chennai. The anti-Malayali hysteria whipped up by the DMK and its cohorts cut no ice with the Tamil masses. During his long years as leader of opposition, when MGR held sway as the chief minister, Karunanidhi would often insinuate that the state was under “Malayathaan atchi (Malayali ruled)”, pointing to some of MGR’s key bureaucrats, who were from Kerala.

Even within Tamil Nadu, the Dravidian movement was notorious for neglecting areas where there was influence of other ‘Dravidian’ states. For example, when the Dravidian movement failed to make inroads into Kanyakumari district, which had a strong nationalist influence and was culturally aligned to erstwhile Travancore state, Karunanidhi quipped, “Nellai enga ellai, Kumari enga thollai (Thirunelveli is our frontier and Kanyakumari is a problem)”. So much for Dravidian unity beyond language chauvinism!

To this day, whenever the conflagration over Cauvery waters flare up, the agitation takes a violent turn with Tamils being attacked in Karnataka. The worst riots were in 1991, when the then Congress government aided and abetted Kannada chauvinistic groups to indulge in deadly violence against the innocent Tamil population in Karnataka. On the Mullaperiyar dam, tensions rose between Tamil Nadu and Kerala.

Meanwhile, within Tamil Nadu, there is always a fringe Tamil nationalist stream, a space currently occupied by Seeman, the controversial leader of the fledgling “Naam Tamilar Katchi”. Ironically, Tamil nationalist discourse emerged as a reactionary counter to Dravidian discourse, which was seen to be marginalising the native Tamil interests. Seeman believes that Tamil Nadu should be ruled only by Tamils certified by his party, which in turn turns out to be only himself. Hatred against Telugu people in Tamil Nadu sometimes reaches such a fevered pitch that entire caste communities are termed as ‘Telugu infiltrators’, as against original autochthonous Tamils. Every community in Tamil Nadu tends to identify itself as autochthonous Tamils and the ‘other’ as the alien infiltrator. A whole bunch of small-time Kollywood celebrities support this Tamil xenophobia.

Haasan has been strangely silent over all these developments in Tamil Nadu, which is in a way understandable because if he ever opens his mouth against such vitriol, he himself would be branded as a Brahmin. In fact, Haasan has been working overtime to remove this ‘stigma’ of his Brahmin birth in the Dravidian land. So, naturally, he took the easy way to accomplish that by taking potshots at Hinduism, some of which were outright juvenile and others intentionally obscene. He considered his opposition to Hindu outfits as his passport to the realm of Dravidian acceptance. Yet, the Brahmin identity always hangs like the Sword of Damocles over his head. In this connection, his invoking of Shiva as a South Indian identity is even more ridiculous. It was not long ago that Haasan himself was ridiculing Shiva in his ‘poems’ on a TV show and portrayed in one of his movies a distorted picture of fanatic Saivaites fighting with Vaishnavaites.

You have some people who call themselves members of the Dravida Kazhagam. As a student of many subjects, including anthropology, I am interested in this movement. Sometime back, I expressed my opinion about certain antics that they were indulging in bordering on violence like stopping of trains and all that. I considered it as ridiculous nonsense. Unfortunately, this moderate description of mine of their activities was not wholly liked by them, and I believe they went about saying that because “Jawaharlal Nehru said this, we will do it all the more.” It was a remarkable proof of that tribal stage about which I have just been referring to you.

So much for Dravidian identity politics reflecting Nehru’s concept of ‘unity in diversity’. The actor needs to rekindle the memory of his young days. History is not the same stuff as mediocre screen scripts for Kollywood pot boilers.

That said, the word ‘Dravida’ does have a long-cherished history. Adi Sankara as well as the Jain monks have used the term. It is referred to locate South India within the pan-Indic cultural mosaic. When South India, along with the rest of India, was divided into linguistic states, the South Indian inter-state cultural connections still existed in the form of pilgrimage routes. Every year, Tamil and Kannada people come together to pray to the river Cauvery. Every year, pilgrims from Kerala come to Palani. Tamils go to Tirupati. All South Indians go to Sabarimala. A true South Indian cultural identity, if evolved along these lines, can help South Indian states solve amicably the long-standing problems between them in the distribution of natural resources.

Further, as Dr B R Ambedkar said about the linguistic division of states in India, the aim is to have one language for one state and not one state for one language. In other words, while Tamil is the administrative and official language for Tamil Nadu, Tamil Nadu is not exclusively for Tamils but for all Indians. It is this civilisational wisdom of the founding fathers of the modern Indian state which the Dravidian parties in Tamil Nadu had challenged and fortunately failed miserably at. Today, culturally illiterate linguistic chauvinists are trying to turn the clock back in both Tamil Nadu and Karnataka.

If Haasan is sincere about creating a constructive South Indian identity transcending linguistic barriers, he should strive towards bringing to the fore this wisdom of Ambedkar. Or his identity politics would be fit only to be described using the same words that Nehru used for the Dravidian identity politics during his time.