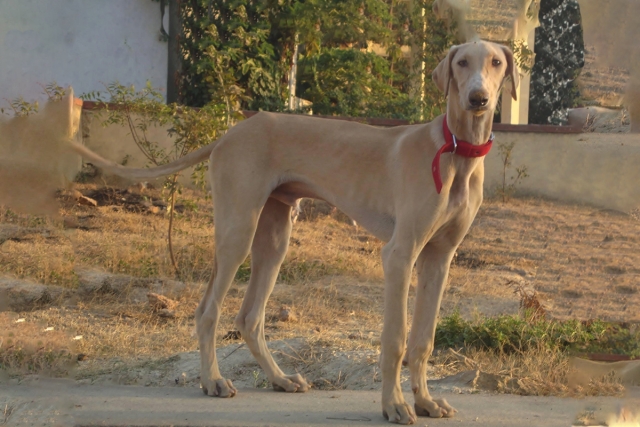 In a first, an indigenous Indian sighthound breed, the Mudhol hound from Karnataka, has been inducted by the IAF to reduce risk of bird strike, and chase away birds and animals from the runways.

Two male and two female one and a half month old pups were brought from the Canine Research and Information Centre (CRIC) in Karnataka’s Mudhol from where the breed gets its name.

These will be trained to scare birds away from the runway, as bird-hits are said to be a huge problem at several airbases.

Deputy Chief Minister of Karnataka, Govind M Karajol, handed over the pups to the IAF on behalf of the CRIC.

These breeds have previously been inducted into the Indian Army. Their physical features as well as their agility, intelligence makes them well suited to perform various tasks for which they are trained by our armed forces, explains CRIC head Mahesh Akashi, as he tells Swarajya about their induction.

Six pups were first inducted into the Indian Army in 2016 at the Indian Army Remount and Veterinary Corps in Meerut, where they were trained for a year and then posted in Jammu and Kashmir.

“Our current DCM Govind Karjol and the then Union Animal Husbandry Department Commissioner Dr Suresh S Honnappagol who also hailed from this region and our centre head Mahesh S Doddamane had steered the entry of this desi breed into our forces which until then only had western breeds serving them,” says Akashi.

This then led to the entire region turning into a ‘breeding ground’ for this desi lean mean canine task force and became a major source of livelihood for the people of the region as hundreds of Mudhol hounds get sold each year.

The latest boost came after Prime minister Narendra Modi mentioned the aggressive and smart sniffers, who are said to be almost on a par with their western counterparts in his 'Mann Ki Baat' in September 2020.

“After seeing the results of the initial inductees we then gave these to the paramilitary forces like the CRPF, SSB, CISF that come under the Union Home Ministry. And since I have taken charge, we have sent four pups to the BSF in Gwalior and on 12th of this month for the first time we are inducting them into the IAF,” said Akashi.

So what is it about these desi hounds that makes them special, we ask.

“Where our men cannot reach, our Mudhols can. They are very slender, non-weight bearing hence their speed is very high up to 60 km/hour. They are basically hunting dogs and once trained they can be used for bomb detection, crime detection. Their sense of smell is very high,” he explains.

Also, generally Western breeds like Dobermann, German Shepherds and Labradors are usually used by our police forces and army but “since our Prime Minister is very much interested in desi varieties and in keeping with his concept of an Atmanirbhar Bharat, he wants our desi breeds to be introduced into all our forces, paramilitary forces and in all police departments at the state as well as central level”.

There has been a huge rise in demand says Akashi, with the centre receiving calls from countries like Bahrain.

Vijayapura, Belagavi, and all nearby areas of Bagalakot have also seen breeders multiply as well as rates peak.

But these are the government rates while the market prices are way above this. There are seven standard colours at the centre while private breeders offer 10 colours.

The ancestry of this breed goes back half a millennia when “kings brought and cross bred Greyhounds from America, the Saluki from East Asia and Sloughi from Central Asia with local dogs of Mudhol region. Since they were bred here, they get the name Mudhol hounds. Raja Maloji Rao Ghorpade used to breed this dog and presented a pair to King George V of England”.