Kasaba Controversy And The Double Standards Of Malayali Morality 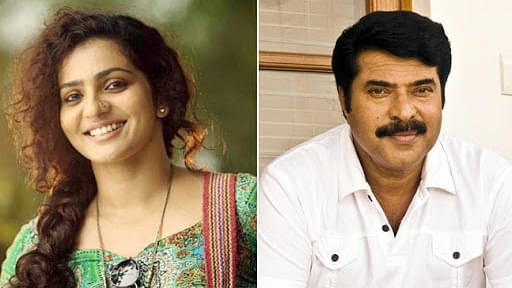 The educated and enlightened Malayali of God’s Own Country has been rocked by a series of morality related controversies in the recent past, that every time threw an ethical wringer at him, many a time pulling off his carefully crafted mask!

It all started with the 2014 ‘Kiss of Love’ protest when couples gathered at signature locations in cities across the state and registered their protest against ‘moral policing’ by non-establishment forces by kissing in public.

Started off as a Facebook initiative, this movement soon spread to other parts of the country and generated wide criticism from various quarters.

Kiss of Love was not something the old-fashioned, religiously oriented sections of the society could stomach, and they cried foul. Various religious groups of Hindus and Muslims, came out clamouring against it from online nooks and street corners. It eclipsed on its own, but only after raging for a while, and pricking the conscience of the average Malayali on his right and wrong.

The more recent version of shredding off the pseudo-morality mask of the Malayali has come about with a flash mob dance in the Muslim dominated Malappuram enacted to the tunes of popular ‘Jimikki Kammal’ by three burqa-clad girls in support of an AIDS awareness campaign. All hell broke loose - first on the internet, then on prime-time TV programmes and finally on the conventional media. The conservative Malayali, led by the orthodox Muslim Malayali, began debating online and offline the righteousness of Muslim girls dancing in public, vociferously and animatedly.

Even as this debate was heating up, the Malayali was caught off the guard by a line of criticism by well known actress Parvathy on rampant misogyny in Malayalam movies.

Parvathy attempted to expose the misogynist called Malayali, by pointing out to an act and dialogue by Mammootty in his recently released movie Kasaba, while speaking at the International Film Festival of Kerala. The male chauvinism of the Malayali was evident in Mammootty’s act of grabbing a senior woman police officer by the (waist) belt and abusing her in the most avoidable language, including four letter words. If the script writer and director were so slipshod in allowing the scene, Mammootty with his socio-political image should have been cognisant of it. The questionable scene demonstrated a rot in the dual personality of the Malayali, who says nothing watching women getting abused by night but shouts slogans in the street corner to ‘protect her rights’ by the day.

The dual personality emerged through Facebook pages, individuals, groups and organisations attacking Parvathy online and offline. The first to come out abusing Parvathy was none other than the Mammootty Fans Association, which enjoys the support of the 66-year old superstar in most of what it does.

The rage against her continued unabated for a while. Many jumped onto the bandwagon with comments for and against. Some said Parvathy is attacking icons to gain popularity, while some others said she is spoiling her future in Mollywood by attacking big names and making enemies of them. Kerala Finance Minister Thomas Issac too joined the debate by saying that “the ones who make opinion not so favourable to some are being met (with) severe abuses. Women are more subjected to this kind of abuses. There is a trend of selectively attacking those involved with the Women in Cinema Collective Movement".

Parvathy received vehement messages on Facebook and through WhatsApp. It ranged from expletives and abuses to rape threats and other physical violence. She remained unfazed, took on some known personas head on, and approached the state police chief seeking action against persons behind the rape threats. Many came out in support of her, though some with reservations on her comments against the superstar stayed away.

All through this, Mammootty remained calm and unreachable for comments, leaving everything for his fans association to handle. This is despite the fact that the star is known for publicly reprimanding objectionable behaviour of his fans. He had recently disapproved his fans’ response to actress Anna Rajan’s comment that she would like to be paired opposite Dulquer (Mammootty’s son) and Mammootty could play the role of his father. Therefore, by not reining in his fans this time, he indirectly endorsed their acts with his eloquent silence. And that was a victory for the misogynist Malayali.

Parvathy, incidentally, is also a driving force behind the Women In Cinema Collective (WICC), a forum of female movie artists of Kerala formed after a popular actress was molested by an organised gang in Kochi last year – a case in which actor Dileep was arrested for alleged conspiracy and was jailed for 84 days. WICC stood firmly behind the actress, challenged the soft pedaling of the issue by male dominated Association of Malayalam Movie Artists (AMMA) in support of the accused actor. Parvathy, Dileep’s first wife Manju Warrier, Reema Kallingal, all have been abused by groups and individuals supporting Dileep during that period. Unfazed, they took them on, well and comfortably. Therefore, it was not something unusual for Parvathy, and she did handle the nonsense with grit and grace.

Well, what amused the balanced minds of Kerala is the eloquent silence of Mammootty, the megastar. Did he approve of the actions of his fans? Could he have controlled his supporters like Tamil actor Vijay did in a recent incident? Or did his political affiliations to the CPI(M) and its TV channel Kairali hold him against controlling the anger of his fans?

Yes, in Kerala everything starts and ends with politics. Cinema industry is not spared either. Mammootty is the chairman of CPI(M)’s official TV channel Kairali and is responsible for channelising Mollywood and its energy in support of the party during elections, and in forming public opinions. He is credited with identifying AMMA president and actor Innocent as the party candidate for the last Lok Sabha elections, fielding actor Mukesh from Kollam constituency in the last assembly elections and coming to the rescue of the party on many crucial occasions. On making public comments on issues of controversies, he is advised by the managing director of Kairali TV John Brittas, who is also the media advisor to Chief Minister Pinarayi Vijayan.

That takes one to the polemical Facebook post by Congress leader V T Balram who challenged a few ideals of Malayalis (read communist Malayalis) through his post. Balram questioned the conduct of communist icon A K Gopalan, or AKG, as he is fondly called by partymen, in courting the 12-year-old Susheela whom he later married after she crossed 22 years of age. Such an attack on a communist icon is unheard of in Kerala.

In Kerala, communist icons are not to be questioned. AKG, EMS, Krishna Pillai are top in the list, and the list is long, featuring other Indian and international communist leaders. For all wrong reasons, Balram was wading into unfamiliar waters. Moreover, he used a few expressions like ‘paedophile,’ ‘attraction to a minor’ etc to attack the celebrated communist leader.

The fury against Balram continued intensely since his Facebook post on 5 January. Communist leaders of all colour and hue descended with their opinions. Some like 97-year old veteran ex-communist, K R Gowri, who had previously criticised EMS by calling him a Brahmin chauvinist, who never allowed lower caste partymen to rise through the ranks, was quoted by a Congress leader as saying that AKG had approached her with marriage proposals twice. Most top Congress leaders kept away from the debate and office bearers of the state party distanced themselves from Balram’s remarks and said the Congress Party has nothing to do with it.

Veteran communist leader and the chairman of the Administrative Reforms Commission V S Achuthanandan attempted to salvage the reputation of his mentor comrade by penning in the communist mouth piece of Deshabhimani calling Balram as ‘Amul Baby’, a reference he had earlier used for Rahul Gandhi. He also reminded the Congress leader of Gandhiji’s marriage at the age of 13.

The diatribe and invective against Balram continued over hashtags, Facebook posts and WhatsApp forwards – from educating him on the tradition of early marriages that prevailed in Kerala till half a century ago to abusing him and calling him names. The incident brought to centre-stage once again the average Malayali’s pseudo morality – on one side opposing anything perceived as bad and immoral, but on the other embracing the same for his pleasure and convenience and protecting people who are close to him even when they cross the moral fencing.

It is disappointing to see that the uprightness and rectitude of an average Malayali ends on questioning his favourite actor’s appropriateness in enacting a chauvinistic character and mouthing foul language against a woman. His fiery speeches and platitude to protect the rights of women and her freedom to dress, speak and move around freely stops the moment his favourite actor is put behind bars on alleged sexual harassment or rape. His cry for tolerance of views stops the moment his political icon is attacked for something unsavoury and insalubrious.

His mask falls from its own weight, no one has to pull it off. His erudite and intellectual head should hang in shame with the recent incidents. His pretension of standing for women’s rights, religious and political freedom, freedom of expression are all only skin deep, and not carved in stone.

And the sooner the Malayali realises it, the better!