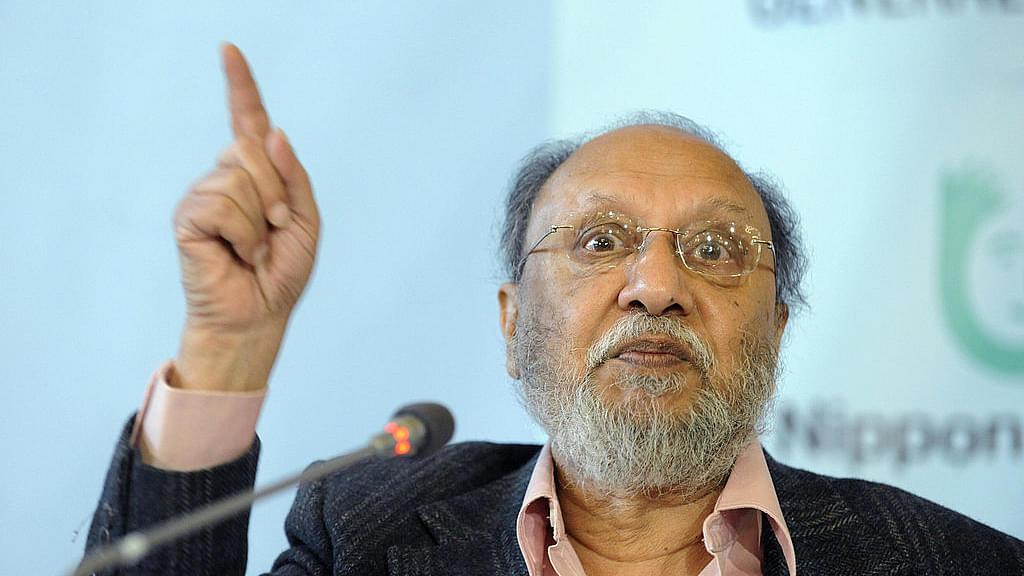 Max Planck, one of the progenitors of new physics, once wryly observed that a new scientific truth wouldn't triumph only by convincing its opponents and making them see the light, but because its opponents eventually die, and a new generation grows up that is familiar with it. Whether this cynical view is true in the realm of science is debatable, but it seems this is very much true concerning India's Old Media and intellectual establishment.

In an interview for the forthcoming anniversary special of Outlook, Ashis Nandy, the pop-political psychologist has made some doomsday predictions for India's future. Nandy made himself the Old Media darling when he declared that in Narendra Modi he had found a 'textbook-case fascist'.

In the present interview, he says that Veer Savarkar has replaced Mahatma Gandhi as ‘the new father of the emerging India’. That is no compliment to Savarkar. Because this ‘emerging India’ by 2100 ‘‘will be more like an American slum to the nth degree, a poor man’s America". His doomsday prediction comes from his shallow understanding, distortion of facts and gross ignorance of the culture and history of India. Nandy provides us a case study of how a person hailed as a great intellectual by the old establishment, is deficient in his tools and domain knowledge of India.

Nandy laments that ‘even in universities’ you are now facing ‘difficulties in saying what you want to’. Then he relates the societal reaction to secessionist forces operating illegally in the campuses to the totally unrelated cultural acceptance of pluralist narratives of Indian religion and epics. To provide an example, he alleges that "there are millions in Tamil Nadu and North Bengal, who are Ravana-worshippers and who observe Ramnavami as a day of mourning".

"What is wrong with it?" he asks with a rhetoric flourish. Nothing, except that he has got his facts wrong. All Tamil literature claims the holiness of Rama. Cholas, under whose rule even modern Tamils embody their ancient glory, claimed themselves to belong to the same solar Kshatriya clan to which Sri Rama was part of.

Then, Nandy informs us that it snows in the poles, "In Sri Lanka, Ravana’s brother, Vibhishana, is worshipped". Nandy does not know that in Tamil Nadu it is very common among Vaishnavas to address him as ‘Vibhishanazhwar’. In fact, it was only when Dravidian racism and Singhalese racism, created by colonial discourse, independently claimed Ravana as their racial icon that Vibhishana was denigrated as a traitor. Nandy informs us that Himachal Pradesh has temples dedicated to Duryodhana and none took offence. In reality, no one takes offence even today, not even the most virulent ‘Hindu nationalists’. As this writer observed, in an earlier article, that Ravana is held in high esteem both in pan-Indic and localised traditions.

Then, Nandy moves to Dravidian secessionism, alleging that when "C N Annadurai declared that Tamil Nadu wanted to be a separate country, nobody called him a traitor or attacked him in Parliament, or organised countrywide protests". However, Pandit Jawaharlal Nehru was fuming and called the secessionist activities of Dravdiainists ‘childish nonsense’. In Tamil Nadu, the Dravidian movement was attacked by both nationalists and even communists as one of ‘British stooges’. Contrary to popular belief, Annadurai had to distance himself from the more radical anti-Indian secessionist stands of his ideological mentor EVR (Erode Venkata Ramasamy). In many places, Dravidian propaganda dramas were stopped from being staged. K Kamaraj, one of the tallest leaders of Congress, even considered passing legislation to stop the denigration of Ramayana. In a counter-offensive, veterans of religious discourse like Thiru Muruga Kirupananda Variyar, who attacked the pseudo-rationalism of Dravidian leaders, came under physical assault by the storm-troopers of Dravidian racists. In the early 1960s, Annadurai started voicing his secessionist demand in the Parliament, justifying his arguments with the alleged neglect of South India. At that time, the Dravida Munnetra Kazhagam (DMK) still had in its constitution 'Dravidanadu' as its central objective. In 1962, the National Integration Council established a 'Committee on National Integration and Regionalism', ironically under the erstwhile secessionist C P Ramaswamy Iyer. (Iyer had survived a murder attempt when he held on to his demand for the secession of Travancore state.)

In 1962, when the Chinese war broke out, the committee's inquiry report was trashed. However, it had already recommended an amendment to the Indian Constitution that secessionist propaganda and activity should be banned. It was in 1963 that the bill was passed in the Parliament. Annadurai was the lone voice to oppose it. After the bill was passed, in November 1963, DMK changed its constitution, which now stated the formation of a "closer Dravidanad Union ... within the framework of the sovereignty and integrity of India and its Constitution".

How does Nandy think the ‘Hindu nationalists’ reacted ?

‘Hindu nationalists’ were perhaps the first to realise the need and place for multiple political narratives and harmonise them. ‘Guruji’ Golwalkar sent a congratulatory message when DMK under Annadurai formed the government. Eknath Ranade, another Rashtriya Swayamsevak Sangh (RSS) pracharak, who was sent for the mission of Vivekananda Rock Memorial had Annadurai as the member of the general body for the Vivekananda Rock Memorial Committee. Hindu nationalism or rather Hindutva is more holistically sensitive and responsive to regional diversity than dreamt of in Nandy’s framework. In fact, Hindu nationalism itself is woven by the diverse localised strands held together by the almost mystic oneness of India.

What is being opposed is that in the citadels of higher learning there is a systematic fall back in the discourse to the racial interpretation of Indian culture, which is a product of the colonial protestant bygone era. Nandy equating these outdated racial interpretations of Hindu culture to the inbuilt Hindu veneration of Ravan etc. is similar to the fundamentalist telling a scientist that he should ‘tolerate’ creationism in the curriculum because science has a lofty tradition of valuing such diverse concepts like parallel universes and string theory.

Hindutva Versus Hinduism Versus Dharmic Traditions?

In a way, the basic premise of Nandy’s antagonism to Hindutva comes from his view of the movement as ‘being homogenised in the manner of Protestant Christianity’. Then he says that "we didn’t have a religion but that we had Dharmic traditions". He alleges that the ‘Hinduism that we see around us, which today is not 2,000 or 4,000 years old but is just 150 years old".

“It was born in urban India, under the new political economy that the British Raj introduced. The reference point was Protestant Christianity, not Catholicism, which is relatively more open...”

It is here that many pro-Hindutvaites may fall for the arguments of Nandy. This is something he has been asserting in almost all his books. In his book The Intimate Enemy: Loss and Recovery of Self under Colonialism (1983), he observes that ‘to use the term Hindu to self-define is to flout the traditional self-definition of the Hindu, and to assert aggressively one’s Hinduism is to very nearly deny one’s Hinduness.’ (p.103)

In delineating the paradoxical relation between the assertion of Hindu identity and the ‘Hinduness’ itself (which when translated becomes Hindutva!), Nandy has been unknowingly echoing what Savarkar had written 60 years before in his Essentials of Hindutva (1923):

‘A Hindu is most intensely so, when he ceases to be a Hindu; and with a Kabir claims the whole earth for a Benares ... or with a Thukaram exclaims ‘My country? Oh brothers, the limits of the Universe - there the frontiers of my country lie.’

. . .and again, he’s perfectly wrong on the RSS

The Ramakrishna Mission considers its Sanyasis as Puris – because the initiation to Sri Ramakrishna was made by Tota Puri – a Naga Sanyasi belonging to the Dasanami tradition. Hence, technically the Ramakrishna Mission Sadhus are Naga Sanyasins. In 1920, an Indian National Congress (INC) session was held in Nagpur. It was special in that it was attended by a large number of monks. An observer report filed in the British police abstract of intelligence informed the authorities that ‘an association of the most powerful sadhus, called Nagas, had been formed at Nagpur’ and that they had agreed to take up the non-cooperation propaganda. The official report stated that Gandhi personally thanked the sadhus for their support and urged them to carry the propaganda to the ‘vicinities of cantonments and military stations’. (William R Pinch, ‘Peasants and Monks in British India’, 1996, p.4)

The 1920 Nagpur session of the INC is also important for another reason. The volunteer committee for this session which looked after the management, food and lodging arrangement had as its members Dr Hedgewar and Dr L V Paranjape – the founder and an early leader of RSS. When ‘Guruji’ Golwalkar brought monastic heads of various ‘Sampradayas’ together on one platform to pass a resolution against untouchability in 1969, he effectively took forward this buried legacy of Gandhi.

The reason for the inability of Nandy to go beyond the superficial forms is not far to seek. Cambridge historian William Pinch points out that the 'Congress distaste and colonial disdain for Sadhus' had 'historiographical' consequences. So, in that Nehruvian framework, ‘the only significant figure accorded any creative religious status was Gandhi himself; all other manifestations of socially engaged religion would be read backwards’ based on the current political conveniences and events (Pinch, 1996, p.10). Nandy too, speaking from that framework, looks at Gandhi as a unique figure, is able to see only what he has been allowed to see by the establishment discourse and his borrowed Western epistemological tools.

Wrong Premises Of A Colonised Psychologist

Nandy has constantly and demonstrably wrongly identified ‘political Hinduism’ with ‘final form’ of ‘semiticisation of Hinduism in the 19th century’. He characterised Ayodhya movement as ‘Brahminic, steam-rolling, ridden with deep feeling of impotency and incapable of sustaining anything incompatible with imported concepts of the State and the Nation.’ (Secularists on the run, Indian Express, 1991). He went on to blame Nehruvian state socialism and the increasing ‘political presence of the middle class’ as the reason for its growth: 'If you have statism, nationalism and secularism, they also have to have their other - Hindu nationalism'.

In all these, he consistently identifies Hindutva as a religiously homogenising political ideology, chiefly held by English-educated upper castes, mainly Brahmins. Empirical data shows that the Hindutva movement is not religiously homogenising and has produced, in a sustained way, literature and research that has questioned the colonial discourse more deeply and expansively than any of Nandy’s works. Whether it is Dharampal on Indic education and knowledge systems, or Meenakshi and Sandhya Jains, on the use of Sati by colonialists as well as the tribal-non-tribal continuum, Hindu nationalists have been at the forefront of challenging the colonial paradigm.

With his Freud-imitating, cigar-holding posture, bourgeois living and neo-luddite romanticism, Nandy presents a curious case of a pretentious colonised Indian mind and transfers his colonised guilt onto the emerging India. It is this colonised and pretentiously Indian self which is increasingly getting relegated to insignificance and meaninglessness as the new India emerges.