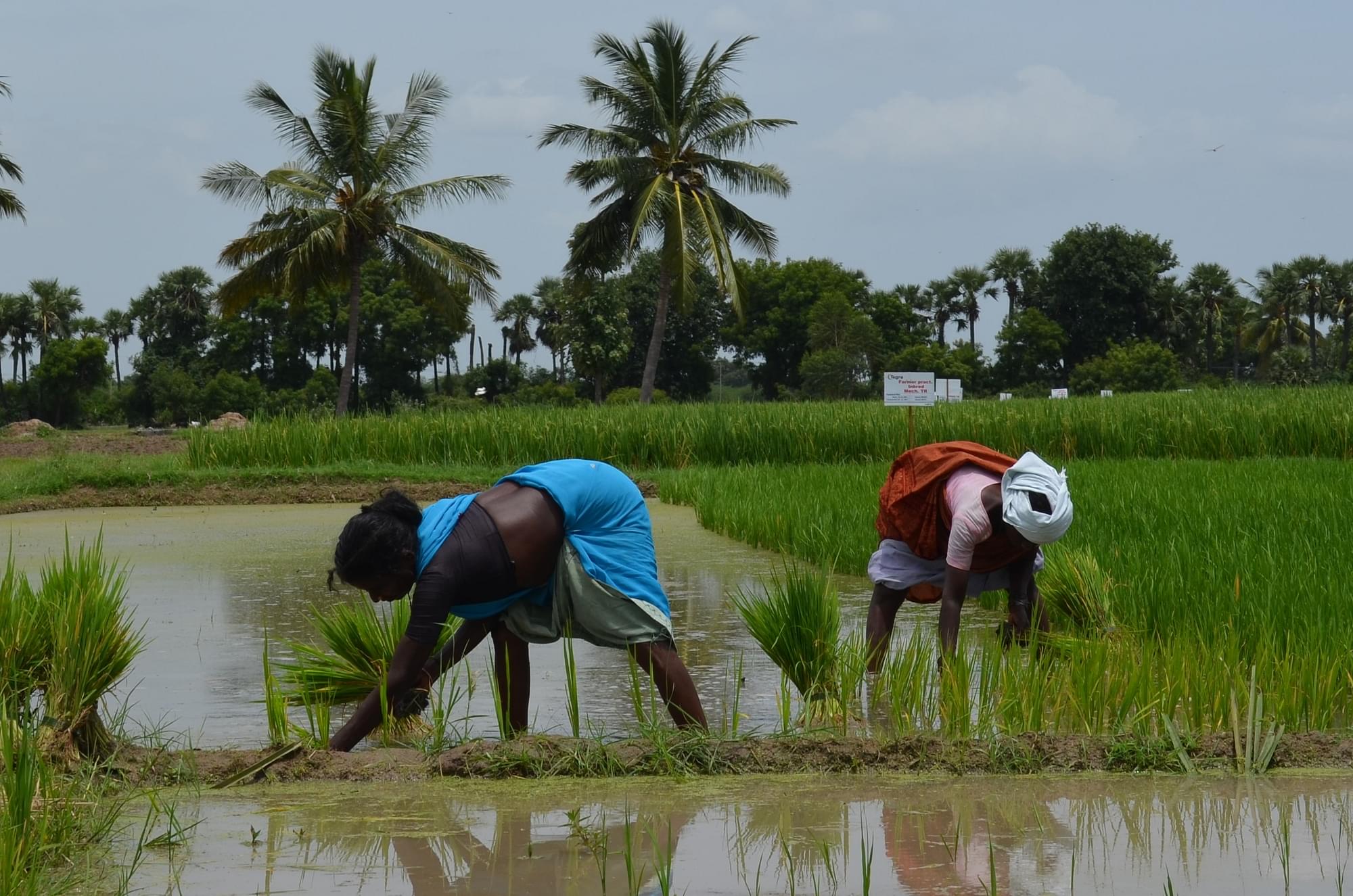 Paddy being transplanted on a farm in Vandavasi in Tamil Nadu’s Tindivanam district. (M R Subramani)

A 12 per cent lower sowing of rabi crops, a water storage that is lower than the last 10 years average and a 49 per cent lower post-monsoon rainfall on top of an 8 per cent deficient monsoon are all sources of concern not just for Indian agriculture but the economy as well.

Offering hope amidst this gloomy picture is the forecast of a low pressure building up in the Bay of Bengal around 9 December, but we will have to keep our fingers crossed on how the low pressure builds up and which parts of the country receive rains.

According to the Ministry of Agriculture and Farmers Welfare, sowing of rabi crops, including wheat, rice, pulses, coarse cereals and oilseeds, has been completed on 35.5 million hectares (mh) against 38.71 mh during the same time last year.

The more worrying aspect of this data is not a fall in wheat or rice sowing. What is of concern is the lower sowing of pulses and coarse cereals. Usually, Agriculture Ministry officials advocate sowing of coarse cereals in the event of lower rainfall or lower soil moisture. According to the data for 30 November, area under jowar cultivation is almost a mh lower.

According to the ministry, the area for wheat has reduced in Uttar Pradesh, Madhya Pradesh (which produces a premium variety that is used in pasta and noodles), Gujarat (which harvests the crop fairly early than other states), Bihar, Rajasthan and Haryana. It is likely that Gujarat might not make up for the area lost.

A Reuters report said that wheat production could be lower in the Rabi marketing year starting April. But is that a concern or what could happen because of that? We will come to that later.

Rice is also witnessing a lower acreage but it will likely be made up since the sowing extends beyond January. Pulses sowing has dropped 1.5 mh with two key states, Maharashtra and Karnataka, reporting lower coverage. With both states suffering from deficient rainfall, it is likely that the lost acreage may not be made good.

Coarse cereals sowing is down 1.1 mh with jowar itself accounting for nearly 1 mh. It is again Maharashtra which is showing lower coverage and the question if the state can make up will remain unless and until the authorities there spring to action and recommend either corn or forage to make up for the loss.

Oilseeds coverage is thankfully better with the sowing of main crop rapeseed/mustard being higher. Acreage of sunflower and groundnut is, however, lower. Why is there a lower sowing in some of the key states?

According to the India Meteorological Department, post-monsoon rainfall in Gujarat, Rajasthan, Madhya Pradesh and eastern Uttar Pradesh is over 90 per cent deficient. In states like western Uttar Pradesh, Punjab, Haryana, Maharashtra and Bihar, the rainfall deficiency is over 75 per cent. In north Karnataka and coastal Andhra Pradesh, the shortage is nearly 70 per cent in Rayalaseema and south Karnataka it is between 35 and 60 per cent deficient.

The deficient post-monsoon rainfall has resulted in the water storage level in the 91 major reservoirs in the country dropping below the 10-year average itself. According to the Central Water Commission, as on 29 November the storage level was 98.353 billion cubic metres (BCM) against 99.29 BCM at the same time last year and the last 10 years average of 103.087. With not much rainfall across the country this week, the level will likely drop further.

What does this scenario portend? First and foremost, we should be ready for a lower rabi harvest in view of the lower coverage. Without doubt, wheat, pulses and coarse cereals production are likely to be lower. At least until 2010, fall in rabi production wasn’t a big issue. But from 2015 onwards, rabi production makes up nearly 50 per cent of India’s total agricultural production.

What a lower rabi production could do is that it could impact the economy. Lower agricultural output means farmers may not have extra cash to splurge on, which could affect a slew of firms starting from two-wheeler manufacturers, cars, white goods and electronics.

This could be true in states like Maharashtra and Gujarat in 2019. Given the fact that the Lok Sabha elections will be held in May 2019, can either the Centre or the respective state governments afford to see such a situation? The leaderships at the Centre and in the state will have to address this issue on a priority.

But let us also look into another factor. A lower production means prices will rise and lead to inflation. However, farmers in some of the states, say like Punjab, Uttar Pradesh and Madhya Pradesh could see higher income in view of a price spike. This is a double-edged sword for any government since inflation could lead to bitterness among consumers.

There are views that the government might ease customs duty to allow imports. But wouldn’t it be prudent for the government to manage its food grain stocks smartly that lower customs duty and allow higher imports? The very news that India might be in the market to buy food grain can result in global prices of these commodities rising.

India has bulging stocks of rice and wheat which can help it tide over any food emergency. In fact, the Centre should use this opportunity to prune its stocks, mainly old ones, and lower its carrying costs. The Food Corporation of India (FCI), on its part, should not expect private flour millers buying wheat to foot its carrying charges.

A few years ago, when FCI sold its wheat stocks on “as is where is” condition, it had quoted a price that included its carrying costs. However, saner elements prevailed and the organisation realised the reality. One of the bane of higher foodgrain production in India has been that the almost always, the government has had to carry it footing storage and interest costs.

A lower rabi production presents a perfect moment for it to offload its stocks and cut its carrying costs. The sale of these stocks will contain inflation and keep the supply line going. In doing this, the government should ensure that farmers get the market prices for their produce.

In fact, it could let them sell directly to buyers if they get prices that are higher than the minimum support prices (MSP). For once, the government and FCI should not insist on meeting the food grain procurement target, if there are indications of a spike in prices of food grains higher than the MSP.

The government and policy makers should be happy that the unfolding scenario is one that presents some great options. One only hopes, the options will be utilised rather than putting more pressure on the exchequer by letting the situation go out of control.