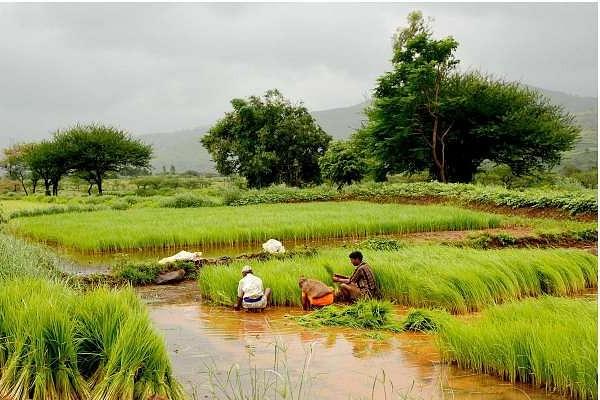 The newspapers and news channels are flushed with analysis of 2018-19 general budget. The overwhelming consensus seems to be that this was budget for ‘Bharat’ with special focus on rural including agriculture while middle class ‘India’ was left sulking. The message from the government gives an impression that it has delivered a kisan-pradhan budget. Prime Minister Narendra Modi termed it “farmer-friendly”. Finance Minister Arun Jaitley even kickstarted his budget speech with announcements in agriculture sector giving an impression that it was the government’s top priority.

But beyond feel-good headlines and calculated messaging, what have the farmers got in this last full budget of Modi sarkar? If we dive into details to scrutinise closely, one realises that the government wishes to bluff its way out of farm stress without anyone noticing. The so-called big-bang announcements on the agriculture front are short on details at best and deceptive at worst.

Consider the first and what is being presented as a radical proposal, the decision ‘to keep MSP (minimum support price) for the all unannounced crops of kharif at least at one and half times of their production cost.’ There is no clarity on how the government will arrive at ‘production cost’ figure. Will it go with A2, A2+FL or C2? Under A2, costs borne by farmers, in cash as well as in kind, on seeds, fertilisers, fuel, irrigation, hired labour, etc are covered. A2+FL refers to imputed value of unpaid family labour in addition to A2 costs. And C2 is more comprehensive term which includes rental foregone by farmers on their land or interest foregone for fixed capital assets over and above A2+FL. Swaminathan report that every politician and party swears by before elections proposes to give farmers MSP 50 per cent more than C2.

In all likelihood, Jaitley meant giving MSP 50 per cent above A2+FL rather than C2 because the government simply hasn’t budgeted for the latter. Consider the A2, A2+FL and C2 prices for the ongoing Rabi crops provided by Commission for Agricultural Costs and Prices (CACP).

If the government were to give 1.5 times the C2, the MSP for wheat would come out as Rs 1,884. Rs 149 per quintal hike on top of Rs 110 hike already announced by the government. Now imagine the cost of subsidy to exchequer, distortion of markets and implications for inflation in medium and long term! Clearly, C2 is out of the picture.

That leaves us with A2+FL which stood at Rs 817. And current wheat MSM of Rs 1,735 is already 112.4 per cent higher than that. So, the government’s 50 per cent promise is irrelevant for wheat.

Ditto for barley (66.0 per cent higher than C2), Gram (72.7 per cent higher), lentil (75.4 per cent), rapeseed and mustard (83.7 per cent) and safflower (28 per cent). Barring the last one, Jaitley’s announcement is moot. Farmers are already getting way higher price than what he has promised his government will pay them.

Forget 1.5 times C2, for khariff crops, farmers aren’t even getting MSP equal to 1.5 times A2 + FL, except bajra, arhar, and urad.

The farmers will benefit but not by much. Take for instance, paddy farmers. Paddy MSP will have to be increased by Rs 125 from Rs 1,550 per quintal. But the fact is market prices farmers got in 2017-18 was hovering around Rs 3,000 quintal. (However, prices in first three years of Modi government stood near or lower than MSP but before that they got better than MSP rate in market). Given that the vast majority indulges in rice cultivation, it automatically means the number of beneficiaries will be less. The crops such as bajra and pulses which also account for a huge cultivation area are already getting close to 1.5 times the A2+FL price if not the exact.

Jaitley’s announcement would have qualified for being called big-bang only if the government intended to make MSP 1.5 times the C2 which for all practical purposes isn’t happening.

“I am confident that this historic decision will prove an important step towards doubling the income of our farmers,” Jaitley said of his MSM “hike”. Sorry, Finance Minister, it won’t.

What about the fact that farmers have to sell their crops below MSP? In such situations, it doesn’t matter how high the MSM is if they can’t get that price for their produce. The government, while cognisant of this problem, didn’t announce anything concrete. Jaitley talked about coming up with “some other mechanism”. He said NITI Aayog will try to come up with a fool-proof mechanism. It is highly unlikely such a scheme will be implemented before 2019 polls. This, for electoral purposes, will be called a “jumla” by the opposition.

Jaitley promised that by March this year, all remaining 125 APMCs will be connected to e-NAM. Despite the promises of ushering in online revolution in farm trading, this isn’t working as envisioned. The data shows that e-NAM has helped boost online trading significantly but in reality it’s not trading but recording that’s at work. Offline trading is being recorded in the system and shows up as online trading!

It’s not that there aren’t appreciable steps for the farm sector in the budget. Developing and upgrading existing 22,000 rural haats (farmers markets) into Gramin Agricultural Markets (GrAMs) so that farmers can sell directly to consumers is a laudable initiative. Doubling of budget for food processing, Rs 500 crore to help tomato, potato, and onion farmers, liberalisation of agri-commodities export, extending credit card facility to fisheries and animal husbandry farmers and setting up Rs 10,000 crore fund for them are welcome steps. Though, these are strides in right direction, they are of not much electoral value.

This would have been understandable in some other time but not today when the farm sector is under severe stress. Since 2014, agriculture growth has been slower compared to the UPA’s and even the NDA-1’s. Productivity growth has been lacklustre. Agri-trade surplus has shrunk from a high in 2013-14. Farmers’ incomes have also stagnated.

Given this backdrop, how could the Bharatiya Janata Party government afford to ignore taking concrete action to address the problems faced by farmers? How realistic is it to expect that managing headlines and clever messaging will work? The farmer will go to mandi to sell his produce as usual. Won’t he realise that he is not better off than he was four years ago?

The government’s too clever by half strategy to bluff its way out of farm stress can prove very costly.