Murugan The Subrahmanyan: Why Suki Sivam Has Got His Spiritual Branding Of The Deity All Wrong 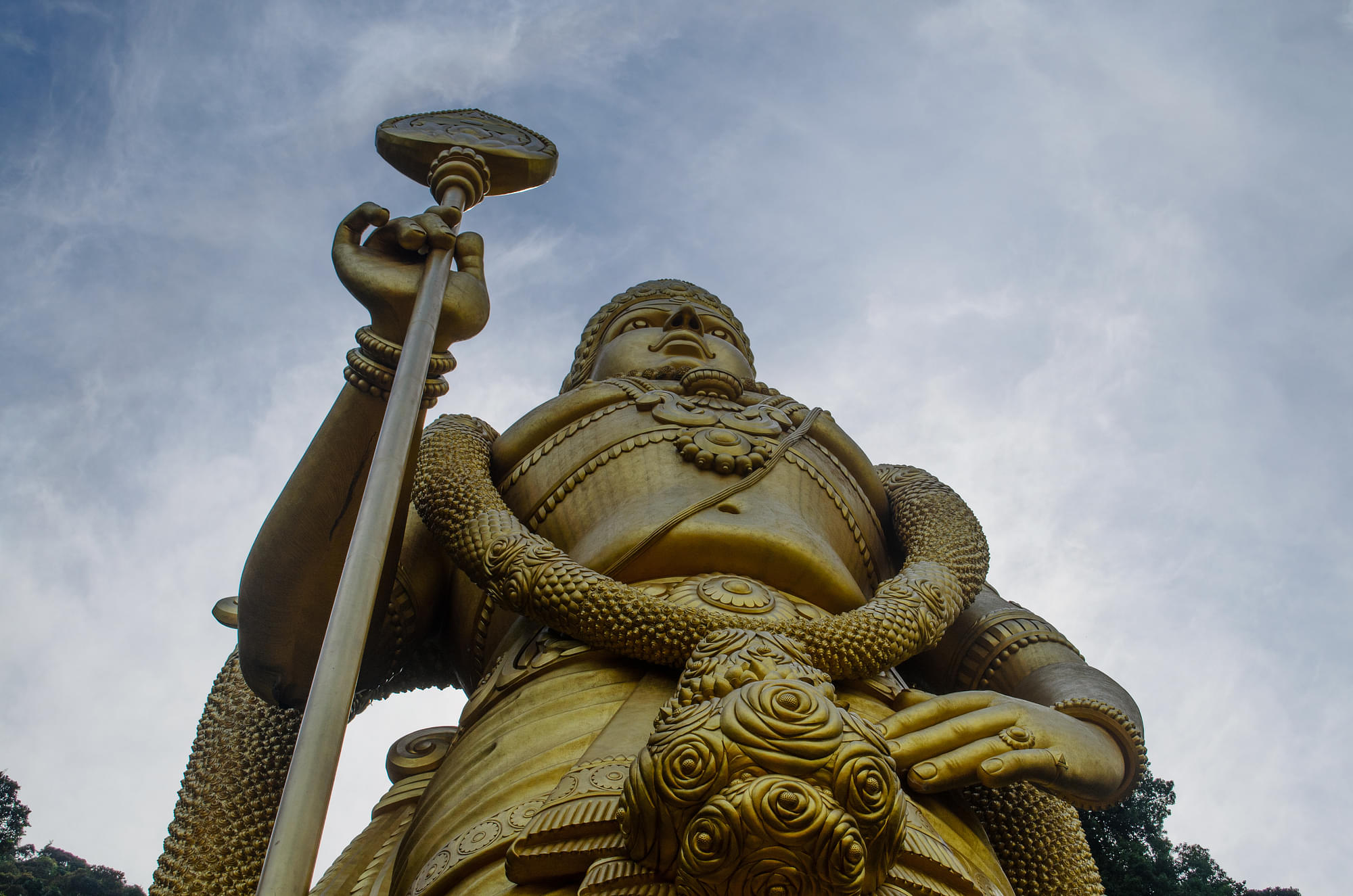 Suki Sivam is a well known orator in the spiritual circles of Tamil Nadu. There are many who take his words as axiomatic. For the last few years, however, he has been catering to the Dravidianist and Tamil separatist constituency in subtle and not-so-subtle ways.

In Tamil Nadu, after the Church-sponsored Dravidianist movement failed to destroy Hinduism, the new strategy being adopted is to claim that Tamil deities are different from ‘Tamil methods of worship’. Though in a way, this is a recycling of old Dravidian racial theory, with respect to the Dravidian movement itself, there is a crucial difference.

The Dravidian movement constructed a Tamil identity in which all past was considered ‘irrational’ and ‘superstitious’. All gods and goddesses were to be eliminated. However, this proved futile. So the Tamil separatist movement, which too has the backing of the evangelical industry, reduces all Tamil Hindu worship to ‘ancestral’ or ‘primitive’ forms of worship. Thus again, a binary is created where Tamil worship is correlated with a kind of ‘primitive communism’ and Vedic/Aryan/Brahminical worship is depicted as a kind of ‘primitive racism’, exhibiting ‘hierarchical and apartheid’ tendencies.

Seeman or Simon of Naam Tamizhar Katchi is in the forefront of this bizarre ideological propagation, while also alleging that Murugan worship is only 'ancestral’ worship appropriated by a ‘Brahminical/Aryan’ religion.

Fortunately in Tamil Nadu, the spiritual traditions which have centered around Murugan are so strong and culturally affluent that most Tamils can easily see the absurdity of these claims for themselves. For example, when Seeman claims that he has DNA relations closer to Murugan than Brahmins in Tamil Nandu, every Tamil Hindu child knows that Murugan, being the light of Brahman, has neither birth nor death.

However, now, when a person like Suki Sivam asserts a binary for Murugan and alleges appropriation, then that can create quite a lot of confusion and may supply ‘respectability’ to the crank theories of Seeman.

In a recent video interview, Suki Sivam made the following points:

Then he adds that whatever be the way of worship etc., people should be ‘good’ through worship.

The foremost problem with this depiction is that it is empirically and emphatically false on various counts. It is true that many Western Indologists and their Indian counterparts have tried to read a synthesis of the Vedic Skanda and the autochthonous Muruga in the current Murugan worship, which is very popular in South India. But what is important is that right from the most ancient of Tamil literature, there is no memory — not a single verse — in support of such a binary division.

In fact, Indian scholars who accepted the colonial constructs often had to resort to convoluted logic when they tried to fit Tamil traditions into the Aryan-Dravidian binary template. Let us consider Maraimalai Adigal, who started the entire pure-Tamil movement. When he wanted to prove the most ancient and supreme nature of Sivan in his book, he pointed to none other than the Gayatri Mantra and stated that Sivan is the one glorified in the Gayatri Mantra.

When the Indologists, who saw that the last of sacrificial remains were given to Rudra, they explained it as because Rudra was originally a non-Aryan god and hence it was an inferior status. However, as Saiva Siddhanta explains and also Stella Kramrisch (who belongs to the Tagore-Ananda Coomarswamy school) rightly points out, as the Vedic sacrifice is symbolic of cosmic presence and dissolution itself, that which remains after the sacrifice, represents that which is the Truth based on which the next circle of creation starts.

This makes Rudra correlate with Sivan as the very essence and Truth behind all diverse forms and names. That which is the last becomes the first as suggested by the first Sutra of Meikandar’s Siva Gnana Botham. Though Rudras as a group later get demoted during Puranic times, the Aryan racial framework to explain the evolution of pluralist Godhead-dynamics in Hindu systems fail at every point.

Suki Sivam states that Thirumal was not mentioned in the Vedas. He could explain that Thirumal was different from Vishnu. But he happily has not yet arrived to that point. But he states that Vishnu was not mentioned in the Vedas. Vishnu is very much there in the Vedas. And what is more right in Vedic literature is that Vishnu is spoken of as the one who measures the entire cosmos in three strides. One of the important aspects of Vishnu (as Mayoon in Tamil literature) is set in the Rig Veda itself, which calls him the herdsman (1.22.18).

Identification of Vishnu as Yajna itself is stated in Aitareya-brahmana (1,15,4), Taittirlya-samhita (2,1,83) and Taittiriya-brahmana (3,1,6,7). If one comes to Paripadal of Sangam age, Thirumal is spoken of as the very form of the Yajna whose beautiful form as the Yagna even makes those who deny god accept him. There is also nothing whatsoever in Tamil literature to suggest that Thirumal and Vishnu are distinct deities merged at a later stage.

Again, Paripadal stresses that though He was in various places in different names, He was worshipped in all these places and forms — an echo of Vedic ‘Ekam Sat Viprah Bahudha Vadanti’.

Now, coming to the term Subrahmanya itself, there are various meanings associated with this term but it was only after the colonial racial views that the name got associated with the ‘Brahminical’ — a term that has no meaning for ancient Hindus. Essentially, Subrahmanya means the One who, while shining, manifests the auspicious and higher Brahman’.

This is also borne by the fact that Kachiyappa Sivacharyar, the Tamil poet-seer who composed Kanthapuranam wrote that Murugan is essentially ‘a light manifestation of the neither with-form nor formless Brahman that is without beginning and end and that which is one and many.’ So Suki Sivam is plain wrong in associating ‘Brahmins’ or ‘Brahminism’ with Murugan.

There is though one way to associate Subrahmanya with ‘Brahmins’, as done by Sri Chandrasekarendra Saraswathi, the revered head of the Kanchi Kamakoti Peetham, who stated in one of his lectures thus: 'He who is Subrahmanya, because He is the very Brahman that is the high essence of Vedas, is also the deity special to Vaidikam and Vaidikas, and hence also Subrahmanya.'

Again here, the primary association of the meaning is to ‘Brahman’ and not Brahmins and only by extension of Brahman being a ‘Vedic essence’, does it relate to those who immerse themselves in the Vedic way of life. Further, Suki Sivam rhetorically asks: ‘Subrahmanyan means He who specially saves Brahmana Dharma. Then, how can he be a Tamil god and how can he marry a tribal girl?’ But the Vedic nature of Subrahmanya, as described by Sri Chandrasekarendra Saraswathi, in no way precludes the deity from marrying the tribal Valli.

Nor is the Vedic way of life different or distinct from the Tamil way of life and values, unless one decides to go not by ancient Tamil literature, but by the colonial-Dravidian- racial narrative.

However, Indologists often associate Skanda with ‘Aryan’ and Muruga with ‘Dravidian’. But as S Ramachandran, the eminent epigraphist points out, Murugan worship was associated with ‘Kanthu’ worship — a form of a pillar. And this word ‘Kanthu’ is associated with Skambha — the universal pillar of light mentioned in Atharva Veda, which attributes even a sukta to Skambha.

In Tamil, a stick or rod is called ‘Kambu’. The form of Murugan is always considered as the manifestation of Vedic mantras. The great saint Arunagirinathar calls Him ‘Vedamantra Swarupa’ . Atharva Veda considers Skambha as the cosmic form of ultimate godhead and presents Him as 'distinct from and superior to the creator Prajapati, serving as the foundation on which Prajapati establishes the worlds'. This is, indeed, very important as we shall see later in Tamil traditions, that one of the most celebrated acts of Murugan is the imprisoning of the creator deity because he does not know the meaning of Aum - the sound symbol of Brahman.

Again, this binary also falls flat both in terms of the traditional literature and even anthropological data. Devasena is the daughter of Indra. Paripadal of Sangham literature clearly speaks of how Murugan has married the daughter of Indra. Anthropologically, it is not the Brahmins who consider Devasena as their ancestral matriarch, but the coastal communities who consider Murugan their brother-in-law who had married Devasena of their clan.

Thirumurukattrupadai written by Nakeerar provides exhaustive visual scenes of Murugan worship in ancient Tamil society. It speaks of Brahmins, with their sacred thread, worshiping Murugan with the most sacred of the mantras — the six-lettered mantra and Vedic hymns. In fact, Nakeerar states that the third face of the six faces of Murugan is immersed in the Vedic Yajna conducted by Brahmins with proper chanting of the mantras, while the sixth face of Murugan is immersed in the love of Valli, the tribal consort of the Lord. The literature vividly explains the way Murugan is worshipped by the Brahmins and ascetics. It also explains the fierce worship of the tribal priestess, who gets into an altered state of consciousness and makes animal sacrifices for the deity.

It is here that the Vedic insight comes out spontaneously and naturally in Thirumurukattrupadai. Nakeerar says that Murugan fulfills the wishes of His devotees in whatever form and way they want to worship Him in diverse places. Here, the poet does not see one form of worship as superior and the other as inferior. More importantly, he does not see one as ‘alien’ and another as ‘indigenous’. In fact, the term he uses to identify the Brahmins is that they belong to one of the most ancient clans (‘tholkudi’).

However, Skanda-Muruga is totally a Vedic deity as He is a Tamil god. Because He manifests the same Vedic Truth of unity manifesting in diversity, and diversity springing out of unity. He is the supreme consciousness that pervades all existence — another vision that is Vedic and naturally the core of the Tamil worldview. The dangerous fallacy Suki Sivam is that engaging is that he has wrongly conflated the rich theo-diversity nurtured by Murugan to a racial binary and then has endorsed the crackpot speculation of ‘Brahmins appropriating an ancient Tamil deity’ with their rituals, which in turn, are alleged by him to be non-egalitarian.

This goes against the Sangam Tamil tradition, the Bhakti tradition and the culturally vibrant Murugan tradition as it exists today. Neither Nakeerar nor Arunagirinathar spoke of this binary. Nor did Vallalar, Pamban Swamigal and Variayar — the greatest seers of Tamil Nadu in recent times. To impose such a binary today on Murugan worship is ridiculously absurd and injurious to Dharma.