Myth-Busting: Was B S Moonje Influenced By Mussolini's Fascism? 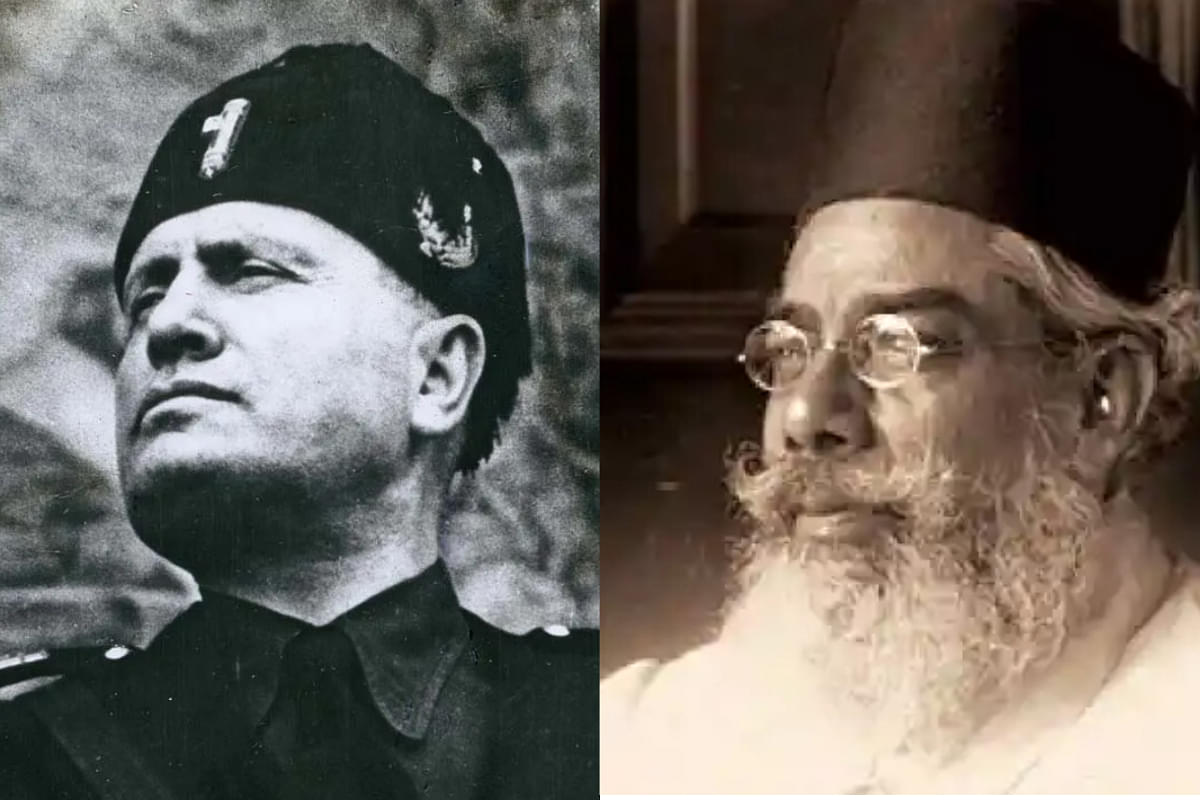 Madhyamam is an important news group in Kerala. Almost everyone from the who's who of Kerala's intellectuals has contributed to Madhyamam.

The news group (magazine and its channel) is actually a propaganda wing of the Jammat-e-Islami Hind - a fundamentalist Islamist organisation. It has transnational independent counterparts.

Its Pakistani counterpart, in what was then East Pakistan, actively collaborated role in the 1971 genocide of civilians by the Pakistan army.

Recently, when the Narendra Modi government announced the Agnipath scheme, Madhyamam came out with a hard-hitting anti-Agnipath propaganda article.

Among the various rants in the article, the cardinal one was the linking of the Agnipath programme to the visit of B.S. Moonje to Italy.

As in all these kinds of articles, Moonje's visit to Italy was highlighted in such a way as to make the readers believe that he borrowed the idea of imparting early military training from fascist Italy.

This particular propaganda line can be traced back to Marzia Casolari’s article, from 22 years back, on Hindutva’s supposedly Italian fascist connection. The article was published in 2000 in the Economic and Political Weekly (EPW).

The essence of the thesis was that Moonje was impressed by Mussolini’s fascist cadre and that strongly influenced the RSS in turn.

Casolari quotes extensively from Moonje’s diary- from the 13 pages describing the meeting of Moonje with Mussolini.

Time and again this article would be recycled by anti-Hindutva media; example-in 2015 by Frontline.

So what is actually the truth?

Was Dr. Moonje a fascist? Was his worldview in synch with the fascist values?

Dr Balakrishna Shivarama Moonje (1872-1948) was originally an ophthalmologist who became one of the earliest sculptors of modern Hindutva.

In his role as an ophthalmologist, he had invented a new method of extracting cataract without removing the capsule. (Ophthalmic Review - Vol 25-26- p. 63)

In 1931, when Dr.Moonje went to England for the Second Round Table conference, he visited the military training academies throughout Europe. He did not single out Mussolini's fascist Italy for this purpose, as the diary entry clearly states:

I said I am interested in the military training of boys and have been visiting the Military Schools of England, France and Germany. I have now come to Italy for the same purpose and I am very grateful to say that the Foreign Office and the War Office have made good arrangements for my visiting these schools.

The real intention of Moonje, rather, flew in the face of European racism.

The idea of classifying certain ethnic groups or races as 'martial' and others as 'non-martial', was generally accepted in the European common psyche, and also by most English-educated Indians. In Nazi Germany, such a racial taxonomy was taken to its ludicrous and inhuman logical conclusions and consequences.

In his diary, Moonje records:

India and particularly Hindu India need some such institution for the military regeneration of the Hindus: so that the artificial distinction so much emphasised by the British of martial and non-martial classes amongst the Hindus may disappear. Our institution of Rashtriya Swayamsewak Sangh of Nagpur under Dr Hedgewar is of this kind, though quite independently conceived.

Here, an important fact is that Moonje was a member of the Sub-Committee of Defence (No. VII) set up by the Round Table Conference 1931. This committee, formed because of the pressure from Indians, also had as its members T.B.Sapru, M.R.Jayakar and Jinnah.

In May 1931, a Committee of experts led by the Gen. Sir Phillip Chetwode, was set up to work out the details of the establishment of a military college in India.

In the minutes one finds that Moonje was the fiercest critic of the British policy of nomination - which was aimed at dividing Indians into martial and non-martial castes. He stated:

This system of nomination perpetuates the myth of the artificial distinction of martial and non-martial classes. It serves as a handle for the people to charge the government with the policy of "Divide and Rule." It propagates the poison of communalism in the body politic of India. It emasculates large sections of the people and as a reaction serves to create what may be called swelled headed in those who are generally enlisted in the Army. It strikes at the very root of the conception of national Army, and perpetuates the system of a mercenary Army which is the inevitable concomitant of a foreign government.

Minute by Dr.B.S.Moonje appended to the Chetwode Committee Report

It would not be out of place here to point out that Dr Ambedkar too wanted to create such a military-science establishment in India.

He had written about this to G.M. Jadhav of Baroda and wrote to Chitre that a college teaching military science would be doing ‘a great national service and also service to Scheduled Castes.’ (Dhananjay Keer, Dr.Babasaheb Ambedkar Life and Mission, Popular Prakashan, pp.405-6)

One should remember again that the much-vilified Moonje-Mussolini meeting happened in March 1931. At that time not many Indian leaders knew nor cared much about the real face of fascism. More importantly, Mussolini supported the Indian claim for dominion status while Churchill was opposed to it.

Unlike Moonje, this leader had well-informed international friends who could warn him about the real nature of fascism. Yet this leader, against the strong advice of his European friends, met Mussolini.

When Romain Rolland tried to persuade Gandhi not to visit fascist Italy, the Mahatma had opined ‘that the Europeans should suspend judgment on Mussolini's 'reforms' until an impartial study could be carried out’.

After visiting the fascist state, Gandhi recommended to every Indian visiting Europe to make it a point to go to Italy and meet Mussolini.

Ironically, another person he recommended to visit was the very same Romain Rolland. (David James Fisher, Romain Rolland and the Politics of the intellectual Engagement, p.136)

Subhas Chandra Bose, in his autobiographical account of the period between 1920-1942, has this to say about the visit of Mahatma Gandhi to Italy:

The Mahatma's attitude towards the Fascist authorities including his attendance at a demonstration of the Fascist boys (the Balilla) was severely criticised in anti-Fascist circles. But there is no doubt that from the point of India, the Mahatma rendered great public service by his visit to Italy.

Gandhi himself had conflicting and changing views on the need to impart military training. But the larger point here is the act of observing and studying European military schools by itself does not make one fascist.

To derive an ideological affinity to fascism based on a pan-European phenomenon is not just wrong but also dishonest.

In hindsight we should actually look at Dr B.S.Moonje with gratitude. We should thank him for a democratic recruitment for an army which has shunned the pseudo-scientific racial theory of martial castes and non-martial castes.

If at the eve of Independence, free India had a formidable, battle-tested army to guard her borders from the immediate aggression that happened, it was because of the vision of Dr B.S. Moonje. Thus his study of European military schools helped free India guard her frontiers.

That such a patriotic visionary of India who fought against racism has been labelled by a mediocre foreign researcher as being influenced by 'fascism' and then for two decades that thesis has been mindlessly and maliciously recycled by media houses, speaks volume about our tamas.

At least in this 150th birth anniversary year of Dharmaveer Moonje, which coincides with the Azaadi Ka Amrit Mahotsav, let us remember this grand old man who envisioned a national army for India.