No, Akbar Did Not Create The Bengali Calendar; It’s A Case Of Identity Theft By Insecure Islamists 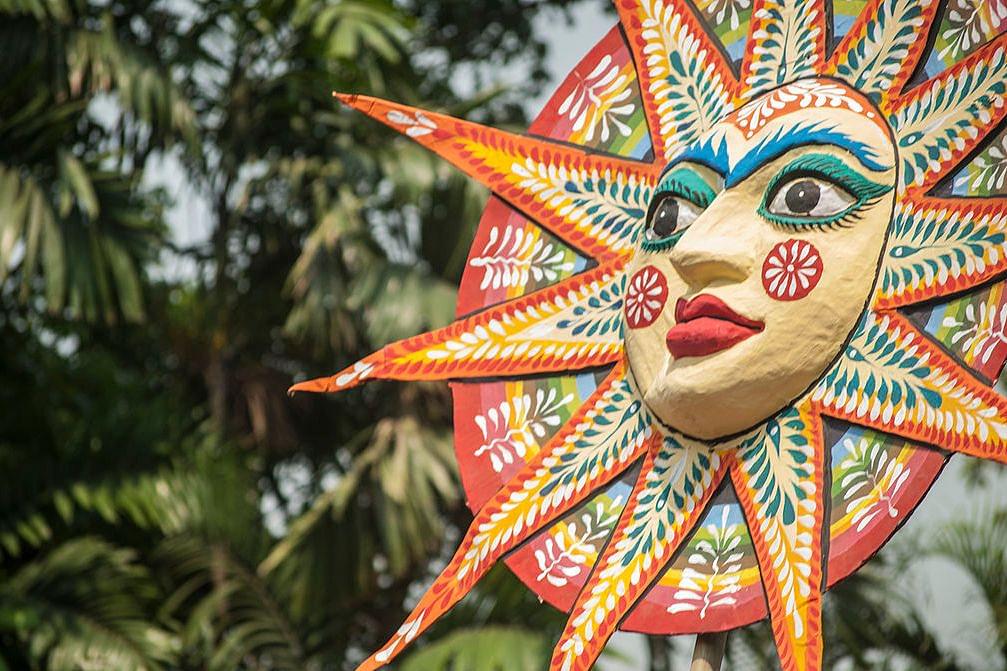 A motif of the sun displayed at Mangal Shobhajatra procession in Pohela Boishakh celebration in Dhaka.

The nouveau riche have a tendency to fiercely compete with the traditional elite for social dominance out of a deeply-rooted inferiority complex.

The Islamic Republic of Bangladesh, speaking a version of Bengali and lacking cultural roots and depth, has always tried to digest the Bengali identity from Bengali-speaking Hindus, who have traditionally enjoyed cultural superiority in spite of being in a numerical minority.

The latest battleground is the ownership of the Bengali New Year.

The Bengali New Year is traditionally a very Indic affair, popularly known as ‘Naba-barsha’ or ‘Halkhata’. It typically commences with Poila Baisakh and ends with Chaitra Sankranti, typically ‘baro mashe tero parban’, which translates to 13 festivities in 12 months.

How did it all start?

At the end of the sixth century CE, Shashanka, a feudal lord of the Gupta Emperor, declared his independence as the king of Bengal, and to commemorate his coronation, he started the Bengali New Year.

In recent times, there has been much propaganda and half-baked theories in various circles suggesting that the proponent of Bengali New Year was none other than the Mughal emperor Akbar. The origin of these theories can be traced to The Argumentative Indian, a book written by Nobel laureate Amartya Sen. He has also made speeches to repeat his claims.

According to proponents of the Akbar-created-the-Bengali-calendar theory, the emperor, to facilitate the creation of a competent system of tax collection, started a solar calendar called ‘Tarikh-i-Ilahi’ in 1584 CE with the base year of 1556 CE, which is the start of Akbar’s reign.

This implies that Tarikh-i-Ilahi actually started 29 years after its base year. 1556 CE was 963 Hijri, the Islamic lunar calendar.

It is claimed that in 1584 CE, the Bengali era was also started with year 963 of the Bengali calendar pegged at 1556 CE.

So, by that logic the Bengali calendar started functioning from 963+29, ie, the 991th year.

Being a lunar calendar, Hijri by that time had already advanced by one year. 1584 CE was actually 992 AH. The ‘Akbarite’ conclusion is that from this year, both 29 Tarikh-i-Ilahi and the 991 Bengali era were started.

But does this theory of Akbar promoting the Bengali era actually hold ground? Or is it a concocted cock-and-bull story? Several pieces of evidence render this theory as a bogus one.

Firstly, in the Ain-i-Akbari, the most authoritative source on Akbar’s reign, various calendars of the world are mentioned, ending with Tarikh-i-Ilahi, Akbar’s pet project. The much touted Bengali calendar is conspicuous by its absence.

Secondly, it is clearly mentioned in the Ain-i-Akbari that Akbar disliked the Hijri calendar and hence promulgated Tarikh-i-Ilahi. So, by what stretch of imagination can it be supposed that Akbar intended to start a Bengali calendar with a base year matching with the disliked Hijri rather than his brainchild Tarikh-i-Ilahi? It again defies both logic and common sense.

Thirdly, Akbar’s empire had 12 subahs (provinces). Some of them, apart from Bengal, were Allahabad, Ayodhya, Agra, Patna, Multan, Kabul, etc. Is it not surprising that the emperor promulgated a new calendar for Bengal but not for the other subahs such as Kabul?

Fourthly, Bengal during that period was a rebel-infested territory with powerful chieftains like Pratapaditya and Kedar Ray, who were at loggerheads with the Mughals. Mughal-occupied Bengal was not remotely the epicentre of Bengal politics. How would an emperor start a calendar, particularly for a territory which is not fully under his control?

Fifthly, many regions in south-east Asia with Indic influences celebrate a New Year which starts on the first day of Baisakh — a prominent example being Bali in Indonesia. So does it mean that Akbar started his brand of Bengali calendar in these regions as well? It is surely a ridiculous proposition.

Undeniable proof of King Shashanka being the proponent of the Bengali era is, in fact, etched in stone, literally. In his book The Land Of Two Rivers, Nitish Sengupta — an eminent administrator and academician — discussed the presence of 1,000-years-plus terracotta Shiva temples in two villages in Bankura district of West Bengal. The epigraphs in these temples, which predate Akbar by centuries, mention the Bengali era.

As regards, the genesis of the myth of Akbar being the founder of the Bengali calendar, we can go back to 1966 when a Panjika Sanskar Committee (Almanac Reforms Committee) was formed in then East Pakistan headed by Dr Muhammad Shahidullah.

The actual aim of this organisation was cultural genocide of the Indic roots of East Pakistan along with the continuing physical genocide of its minorities in order to complete the ‘Pakistanisation’ process.

It is primarily because of the recommendations of this committee that this fantastic fiction of Akbar promulgating the Bengali era is vigorously promoted with support from the state machinery. This committee recommended some amendments to the Indic Bengali calendar, which were implemented to make the national calendar of Bangladesh.

In this calendar the 14th day of April is hard-coded as ‘Poila Baisakh’, or the first day of Baisakh. This calendar was made official in Bangladesh only after Islam was proclaimed as the state religion in 1988.

A procession with masks of tiger and owl was also taken out which was hitherto unknown in traditional Baisakh celebrations. This is known in Bangladesh as ‘Mangal Shobhayatra’, now imitated by the Left-liberal lobby in India. It has little traction among the masses in West Bengal.

A culturally insecure Islamic Bangladesh has always tried to impose an Arabised version of Bengali culture to replace the Indic cultural ethos of Bengal — the Arabisation of the language itself began with the cleansing of Sanskrit words and artificial insemination of Arabic words.

There was also the laughable proclamation of Sheikh Mujibur Rahaman as the greatest Bengali in 1,000 years, ignoring luminaries such as Rabindranath Tagore and Subhas Chandra Bose.

The latest is this attempt to hijack the heritage of the Bengali New Year. Needless to say the cultural Marxists on this side of the border are accomplices in this crime.

There is a famous dialogue from the Bollywood movie Sarkar:

The Islamists of Bangladesh are on the same path. They are not happy just reducing Bengali Hindus to a meagre 8 per cent from 23 per cent of the population a few decades ago, but their focus is the destruction of the essence of the Bengali identity along with its cultural ethos and its Indic roots.

The aim is to replace it with an adulterated Arabic version. We must oppose this attempt tooth and nail. Bengalis cannot afford to give away their cultural roots.

(Acknowledgement: the Bengali version of this slightly edited article was published at Bangodesh)