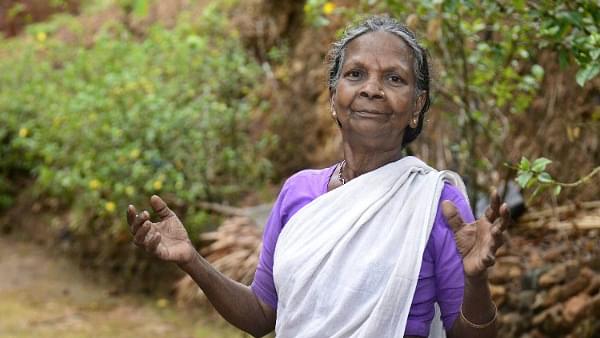 Over the last couple of years, the government has made a break with tradition with regard to the Padma awards. First, it democratised the process of nomination, allowing regular citizens to nominate the awardees, thus breaking the stranglehold of members of Parliament, ministers, state governments, governors, previous awardees and prominent citizens. Second, it promised to recognise and honour unsung everyday heroes whose work has improved the lives of people around them. This has resulted in rewarding unique Padma awardees like Meenakshi Amma, the oldest kalari gurukkal (kalaripayattu teacher), and Nanammal, a 97-year-old yoga teacher. Among them is the remarkable Lakshmikutty from Kerala, an expert in tribal medicine. Within three days of the announcement of the Padma Shri award for her, Prime Minister Narendra Modi lauded her service to society in Mann Ki Baat, the radio programme hosted by the Prime Minister.

Lakshmikutty, a member of the Kani tribe, lives in a small thatched hut in the forests of Kallar in Kerala’s Thiruvananthapuram district. Her reputation as a healer draws hundreds who trek to her hut for treatment, primarily for poisonous snake and insect bites. She says she can prepare over 500 medical preparations purely from memory. Lakshmikutty learnt her vast repertoire of herbal lore from her mother, who was a midwife and a healer for the tribe. Her keen observation of nature has given her further insights into creating remedies.

Lakshmikutty has spent her life living in the forests of the Western Ghats. In many senses, her life has been marked by fortitude and resilience in the face of suffering. As a child, she demanded that she be sent to school, at a time when no girl of her tribe had attended school. Her persistence made her father give in, and she would walk 10km to attend school every day. This helped her to study up to Class VIII, after which she had to drop out as her school did not have higher classes.

During her walks to school, she fell in love with Mathan Kaani, her cousin whom she eventually married at the age of 16. Until his death a year ago, Kaani was a solid source of support, standing firmly by her through all her endeavours and achievements. The couple ensured their three children got a good education, which was remarkable, considering that almost no one in the settlement attended school.

Unfortunately, fate struck a twin blow with the successive loss of two of her sons. The elder son was killed by a wild elephant, while the younger son succumbed to a snake bite. The trauma of this loss made Lakshmikutty learn all that she could about remedies for poisonous bites, so that no one coming to her met her son’s fate. Her only surviving son works as a chief ticket examiner in the Indian Railways.

Her remarkable healing abilities gradually spread through word of mouth, and a steady stream of patients began to visit her house. In 1995, her work was recognised when she was awarded the Nattu Vaidyarathnam award by the Kerala state government. This was followed by awards from Kerala University, the State Biodiversity Board and recently from the Indian Biodiversity Congress in 2016. Lakshmikutty has been invited to conferences on traditional medicine across the southern states. Apart from this, she is also a writer with over 40 poems to her credit.

Lakshmikutty has had a keen interest in sharing her deep understanding of plants and herbal medicine. She teaches tribal medicine at the Kerala Folklore Academy and has guided many research fellows who seek her help in documenting the rich medicinal flora of the Kallar region.

Despite fame and recognition, Lakshmikutty still lives a difficult life. She resides alone in her hut that has no road connectivity, making travel difficult and perilous in a forest with wild animals. She is also concerned that patients cannot be brought to her in time for treatment. Lakshmikutty dreams of setting up a small hospital around her home so that those who come for treatment can stay until recovery.

Forest Minister K Raju felicitated her and promised government support in propagating tribal traditions and medical systems. Shockingly, however, the Minister for Development of Scheduled Castes and Scheduled Tribes A K Balan made a derisive comment on the floor of the Kerala assembly, remarking that Padma awards would next be given “for astrology and palmistry”.

While Lakshmikutty’s tale is inspiring to say the least, it is definitely one of courage and inspired effort. It is also important for us to see her in the light of the broader context of tribal knowledge systems and practices. The Kallar region, where Lakshmikutty lives, is located in the southern part of the Western Ghats, one of the world’s 10 ‘hottest biodiversity hotspots’ for its sheer diversity of species. At the last count, the Western Ghats is home to over 9,000 plant species, 139 animal species and over 500 bird species, with many of them endemic to this region. New species are routinely discovered every year.

Here, many tribal groups live in harmony with nature. One of the largest is the Kani tribe, with over 16,000 members, to which Lakshmikutty belongs. The Kanis were traditionally a nomadic community who have now largely settled down. They mostly engage in traditional occupations like basket weaving, mat making, cane works and the collection of forest produce like honey.

The tribe has traditionally possessed rich knowledge of herbal medicine, which has been passed down through generations by word of mouth. Generally, this knowledge is strictly kept within the community. The Kani people trace their knowledge of medicine back to Agasthiya Maharishi, who is considered to be the founder of the Siddha system of medicine that is prevalent in Tamil Nadu. Kani folklore narrates how their ancestors were originally proficient in archery. Agasthiya changed this because he wanted peace in his abode of meditation. He took away their bows and arrows and in return gifted them a scroll of herbal remedies and a boon that they could cure the sick with their sacred chants. Since then, the Kanis say, they have been proficient in their healing tradition of malamarunnu, the medicine of the mountains. Interestingly, the entire region is known as Agastiyar Koodam, the abode of Agasthiya.

The Kanis consider this medicinal knowledge a sacred practice and the healers would not charge for consultation. The system has a strong focus on toxicology. It says that poison can enter the body through five different routes damshanam (bite), sparshanam (touch), shwasanam (breath), snanam (bath) and panam (drink). Each has a different treatment mechanism, which is a combination of external and internal administration of herbal antidotes, followed by a strict dietary regimen. There seem to be strong similarities with Siddha and Ayurveda in terms of diagnosis and treatment.

Many of the plant species and herbal remedies used are unique to the tribe and unknown to the outside world. This holds tremendous possibilities for furthering medical research. If this is done in a sensitive, just and equitable manner, by consulting the tribe and protecting their intellectual property, this could be beneficial both for the Kanis and humanity at large. With India being home to over 100 million forest dwellers, each group possessing its own unique traditional medicinal systems, this assumes tremendous importance.

One of the first experiments in benefit-sharing was the discovery of Arogyapacha. In 1987, Dr Pushpangadhan of Tropical Botanical Garden and Research Institute (TGBRI), Kerala, was leading a research team through the forests of the Western Ghats. After hours of trekking, the team was overcome by fatigue, while their Kani guides Mallan Kani, Kuthy Mathan Kani and Eachen Kani were quite fresh. After much persuasion, they led the team to Arogyapacha, a herb whose berries replenished energy. After eight years of clinical research and trials, they isolated fatigue-reducing and immunity-enhancing compounds and created a herbal formulation named Jeevani. This was patented on behalf of TGBRI.

The TGBRI then entered into a commercialisation partnership with Arya Vaidya Pharmacy, which paid Rs 10 lakh for licensing and agreed to a 2 per cent royalty. Dr Pushpagandhan wanted to share the benefits equitably between TGBRI and the Kani community. Two Kani members were asked to set up a trust representative of the tribe to which Rs 5 lakh from licensing was transferred. The Arya Vaidya Pharmacy also agreed to source Arogyapacha from the Kani tribe and provide assistance in growing them. Jeevani was marketed as the next ginseng and it created a huge buzz in the international market leading to high demand. The model of revenue-sharing was presented at the United Nations Convention on biodiversity as an outstanding example of equitable access and benefit sharing.

When everything seemed to be going well, the Forest Department confiscated tonnes of Arogyapacha from non-tribal smugglers. This led to a crackdown on cultivation and harvest of Arogyapacha from the forest, affecting tribals and smugglers alike. Despite appeals, the Forest Department did not relent. After trying in vain to resolve this deadlock for some years, Arya Vaidya Pharmacy surrendered its licence. The product also ran into biopiracy problems with US-based companies attempting to patent the Jeevani formula and process. Though the TGBRI was aware of this, the high costs of litigation prevented them from challenging the patent. Further, the general nature of the then existing intellectual property laws made it impossible for patents to be granted to the Kani tribe. Traditional knowledge could not be patented as it lacked ‘innovative character’ and the knowledge is held by communities and not individuals. Finally, there was also conflict within the Kani tribe, which felt that members of the tribe decided on their behalf without consulting them.

The Aryogyapacha experiment shows both the possibilities and the challenges of creating sustainable access and benefit sharing models when it comes to indigenous knowledge systems. However, this does not mean it can’t be done. The provisions of the Biological Diversity Act and Forest Rights Act of 2006 redress these historical injustices and provide powerful legal protection for tribal knowledge. The Biological Diversity Act declares that the intellectual property rights of of traditional knowledge belongs to the community members while the Forest Rights Act provides rights for collection, ownership and use of forest produce. Combined, the two Acts put the traditional knowledge of the forest dwellers on equal pedestal with documented scientific and technological information.

Further, the Traditional Knowledge Digital Library set up by the central government in 2001, provides for documentation of traditional knowledge primarily to fight international biopiracy claims. With these protective mechanisms in place, it seems possible that an equitable and beneficial access and benefit sharing model can be created that respects the knowledge and stewardship of the forest dwellers and shares the fruits of their knowledge with the larger community.

The Padma Shri awarded to Lakshmikutty is indeed a well-deserved recognition for her life and work. However, it is important that we don't confine this to only a celebration, but also focus on the larger issue of recognition of the knowledge systems of our forest dwellers and tribes. We must use this opportunity to ideate on and create sustainable benefit and access-sharing models for indigenous knowledge that create Yogakshema, sustained-well being for everyone concerned.